In January 2010 I was on Upper Duval checking out this funky little deli. This is the essay I wrote reviewing the joint. 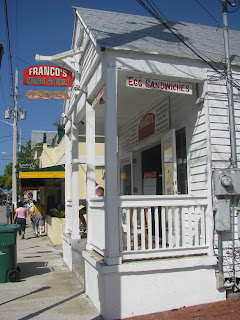 This deli is a recent arrival in Key West operated by a couple of brothers whose last name is, appropriately enough Bologna, the city that gave it's name to the pressed meat called baloney...When I asked him if his name forced this career onto him brother Peter ( which wa show he identified himself) looked at me a bit old fashioned and said "No," in a gruff New York style. "I could'a been anything. This was my fate." I wondered if he could have been a contender too but kept that thought to myself. His brother Franco paints in between making sandwiches: 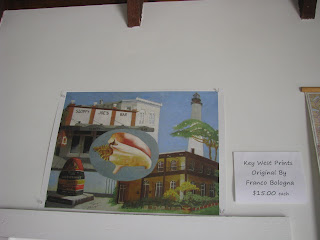 I have no experience of New York style delis having spent most of my adult life in California. However one night I got a call at work from Officer Sellers, she who likes to call me "Mr Conchscooter" after the time she spotted her neighbor's house on my blog. "What's the name of the deli on Upper Duval?" she asked, anxious to show her friends a good time. "Er..." I said in the manner of one who is mistaken for a person who knows everything. So when this Key West native started extolling the value of Franco's I thought I'd better try it: 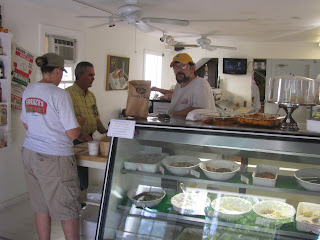 Peter Bologna (unless he was pulling my leg and he is a shy painter called Franco) in the yellow cap, saw the camera and asked if I was a restaurant critic. "No" I said. He grunted when I said it was just a record for my blog. "I would'a bribed you..." The thought hung tantalisingly in the air. I wondered what a Bologna bribe looks like. Perhaps a bottle of virgin olive oil or some capers from the Old Country? 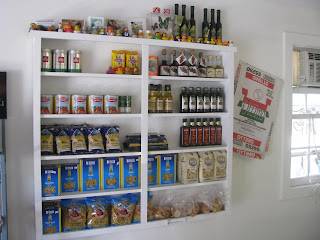 I grew up somewhere in the middle of the Italian boot and we never had sandwiches like they sell here. The Italian sandwiches I ate as a kid were two pieces of bread with a piece of meat or a piece of cheese, no condiments, no mayonnaise no lettuce no nothing. No wonder Italians emigrated en masse to America. It wasn't that the streets were paved with gold, it was that Italian heros had all the ingredients one could imagine between two slices of bread. 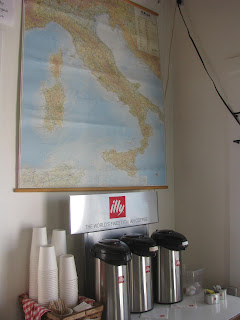 And Illy coffee isn't bad at all though I've never seen it sold out of a Thermos in Italy. New York maybe but I only ever spent one night in New York 29 years ago so I know nothing about the Big Apple. Franco's deli charges 50 cents for a cup of ice and only let's customers use the restroom. That's a Key West thing, else the bums will set up camp there. 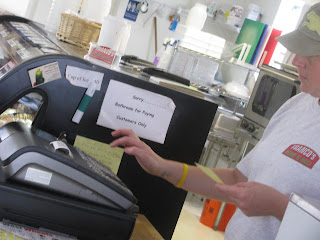 They proudly use Boar Head meats and I guess that was what I got because I wanted to try the basic cold Italian combo. 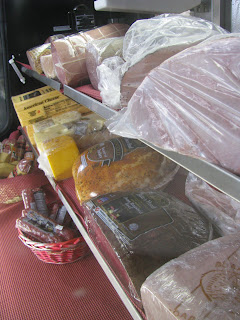 They also produce Italian pasta dishes and stuffed vegetables. I was planning on eating the sandwich at the movies so I wanted something easy to deal with. Look at that sparkling clean kitchen: 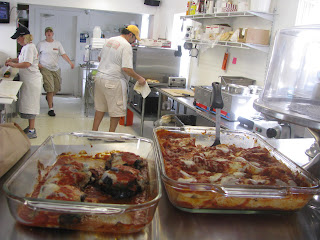 They don't have anywhere to sit except a couple of stools on the porch which make a nice spot to observe life on Upper Duval. The yellow awning marks the Banana Cafe next door which used to be my favorite Italian restaurant in Key West called Carmine's which had to close as the landlord went nuts and doubled the rent or something. Very annoying as I liked the Banana Cafe better in it's old cramped intimate quarters. A crepe at the counter was a great lunch for one. Now I have Franco's to test: 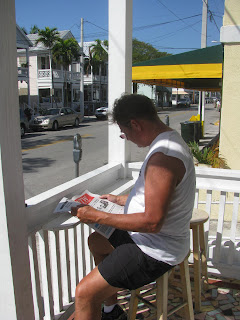 Notice the prices are not especially high and one has to wonder what a sweet Italian sausage or a chicken cutlet would taste like. They also use this abbreviation for parmigiana which I first heard on a TV show called The Sopranos where they abbreviated everything and cut off the last vowels of Italian words. So that becomes "parm" which would shock the residents of Parma no doubt, which is where the cheese is from. Abbreviating is not an Italian thing to do. Unless you are in New York or New Jersey or somewhere. 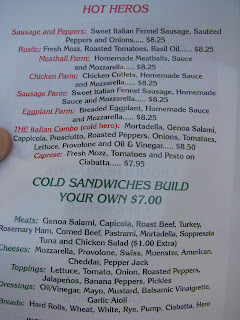 They sell salads too and they have stuff for breakfast which sounds enticing. It's as well I live outside the city I think, this is not low calorie food. 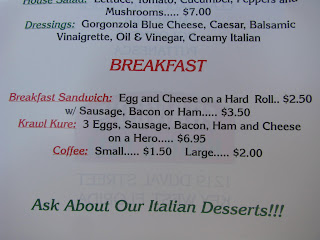 For eight and a half bucks I got a sandwich big enough for two meals. 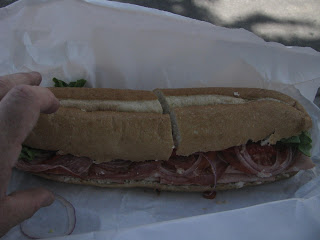 I wonder what a New Yorker would make of it?
Posted by Conchscooter at 12:01 AM

So is this deli still there?

I don't eat there much as I am trying to keep weight off, but somehow it flourishes without me. I like the atmosphere.

I read on TA that it was closing, but have been by there several times in the past few weeks and it seems to still be doing a nice business. Maybe it's scheduled to close after season. Sad if true...