Jack Riepe's Conversations With A Motorcycle

I was susrprised and delighted to receive a package from Jack Riepe just before Christmas. I know Jack has been going through the torments of Hell since Hurflooded his publisher's offices and his local Post Office destroying stacks of books and any prospect of producing more quickly or easily. But Jack Riepe doesn't give up easily and the priority mail envelope was proof of that. 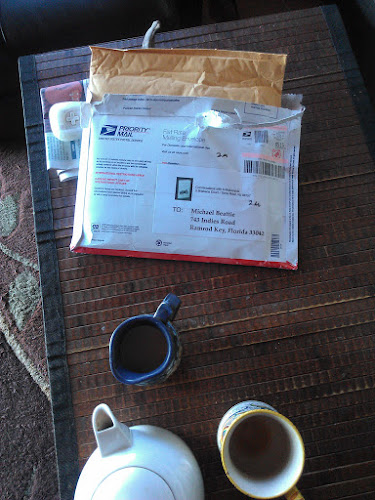 Jack Riepe's blog Twisted Roads is  known and widely read and  this book is an extension of that writing style - 186  pages of lyrical descriptions of the rides of his youth, the dark vortex that was Jersey City, a place filled with vivid male characters the author tried to emulate and the women he wanted to "get to know," all brought to life in Riepe's  inimitable style. 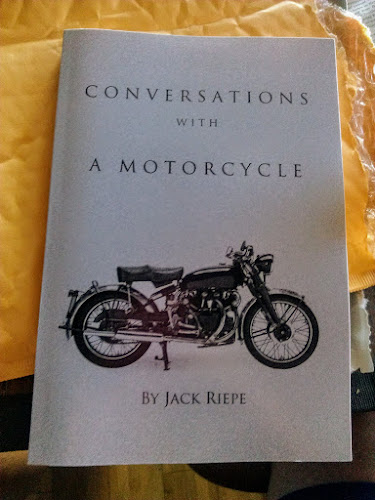 I met Jack Riepe once and stayed with him at his  former home in Pennsylvania and yet after three days in his company it's as though I've known him a lifetime, which isn't far from the truth as Jack has a penchant for living a great deal all at once.  I've read his blog and you might imagine this book is a collection of blog essays; well,  it's not. This book is a coming of age story simply told, with self deprecating humor and penetrating insights into what makes human beings idiots. 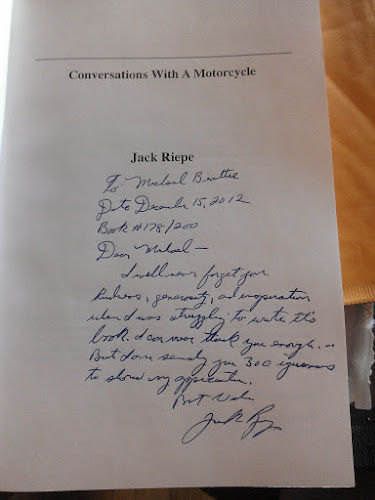 For reasons explained early on, the cover of the book depicts a classic Vincent motorcycle while the star performer in these recorded conversations, foil as it were, is a particularly lethal form of Japanese motorcycle that was produced briefly in the 1970s by Kawasaki  laws of physics and health and safety regulations. The bike was fast and qufriend in Italy who was lucky to walk away from a wreck on two stroke Kawasaki triple not known for cornering abilities. That Jack learned on one these monsters and failed to kill himself on it is not cause for self agrandisement in these pages, but it ought to be. Typical of Riepe he mocks himself for buying the one motorcycle that would reduce his sex appeal in a field of hard core riders, whereas he should be telling us he was a hell of a rider for learning to cope of that Kawasaki. 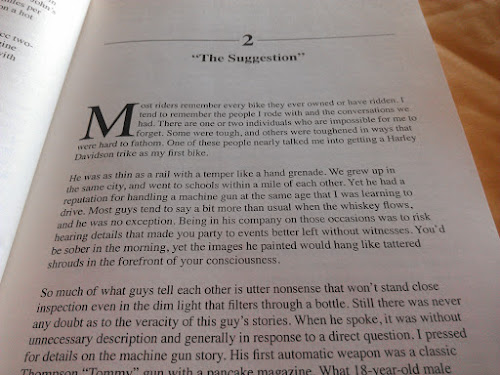 Conversations With A Motorcycle records young Riepe's life and tells us how his puke green Kawasaki helped mold him and showed him the path to manhood. As odd as the premise sounds it works beautifully, not least because Riepe's facility with women at age 19 was devastatingly absent. He pines for a love he has yet to meet, intwines his hopes and dreams with his bike, and by the end of the story reminds us how foolish we are who seek, find and throw away what we so eagerly sought in the first place. This is a lot more than  your typical Riepe flourish and a few descriptiosn of nubile curves and trombone solos in dark alleys with impossibly beautiful women. 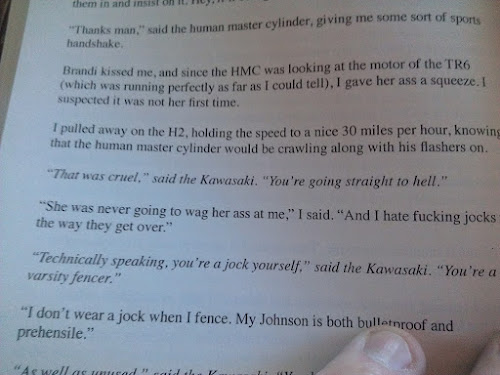 I have never read anything anywhereJack's ability to describe the act of riding a motorcycle, never mind the peculiar joys of terrestrial flight produced by two wheels and an engine. Riders will see the hand of a master at work as they nod knowingly as Jack explains the emotional stupidity of our first motorcycle purchase (mine, in Italy with an MV Agusta 350 was so similar to his it was uncanny to read it), then his words will leap off the page as he the rides of his youth for the reader. the brilliant part of this book is how all this technical derring-do in such a way as to embrace readers who have no idea what a motorcycle is nor why any sane person would ride one. An affinity for motorbikes isn't necessary to appreciate this story, this is pure story telling in an ancient tradition. One can read The Hobbit without knowing anything about Tolkien's imagination. Equally Jack Riepe's imagination, descriptive abilities and narrative pace will carry the reader far beyond the simple world of 1970s motorcycling. And it was a simple world a weekend ride could be done on less than ten bucks with enough left over to help out a stranded rider.  It was a world that kept at bay an aspiring rider over-educated and excessively sensitive for the Bucket of Blood pub in Jersey City, but it was also a world that we all know wherever we grew up and for a few short hours Jack takes us back there, where life was simpler and more fun and more crowded with existential angst than we care to remember. 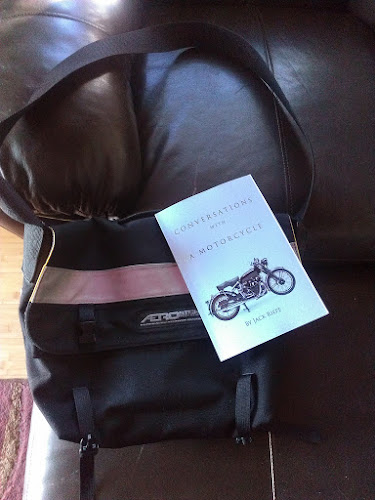 I know Jack Riepe and I like him and that makes me a terrible reviewer of his book, for I was bound to enjoy it. I'd like to think everyone who has read his blog has purchased a copy of his book, but I know that's not the case, and I wonder how that could be. I cannot think of a reason why a rider wouldn't be clamoring to read it, and I hope I have transmitted the idea that non-riders will be doing themselves a disservice by not buying a copy of this first edition piece of literature.

I thought I wasn't getting my book. Firstly I couldn't order, Jack told me to "wait", then the shipment was lost in the storm and got waterlogged, then he said he was sold out, then he told me to buy on Amazon next year.

I was nearly in tears . . . then you write about a book which I cannot obtain

What nice things to write about any writer! Especially me. I thought I had died and was reading my eulogy. The number of women who wish I had died is growing in leaps and bounds.

I am delighted you liked the book. I am thrilled that you saw fit to address one of it's secrets: that it has a huge appeal for riders and non-riders alike. This book is my best work. It set me free at a time when I thought freedom was something I'd imagined.

But this one is far from the end... The next chapters will be written on the sands of Key West, when I show up on another beast — a BMW K1200GT. Please begin listing the appropriate strip joints for my review.

Thank you for your offer of a spare room, though I can only stay three months.

Thank you for your generous and kind book order. The reason you are waiting for a book is that you sent it in after the first printing, and two extensions were entirely sold out.

I was initially prepared to sell 5 or 10 copies a week to those of my readers initially interested in my warped style. I was not set up to sell 20 or 30 copies a day. There was one day, after the book appeared on national television, that I received 40 orders in 20 seconds.

The hurricane set me back more than a month... But I am just catching up now.

The book never made it to Amazon as there were no copies available to send to Amazon. That was the month when used copies of my cigar book reappeared on Amazon, running in price from $83 to $176.

For various reasons,signed copies of the new book are very popular too. No one is more more surprised than I am. The second printing is underway, and there will be plenty of these books for sale — just in time for Valentine's Day.

You have a priority position on the wait list. There are already several hundred names on this list, and there is concern that the second printing will sell out too.

Like yourself, many people have sent payment reserving 4, 5, or even 10 copies of the book. It's a little daunting.

The other reason I asked you to wait as it is now possible to pay on PayPal. An automated order system is in the works too.

Happy New Year Bob! Stop crying... Your book is coming. I'd send you my copy, but I sent it to Conchscooter.

This is really a nice and informative, containing all information and also has a great impact on the new technology. Thanks for sharing it bromfiets kopen

Info is out of this world, I would love to read more. quality wordpress themes