I have composed so many Letters to the Editor in my head I have no precise idea why I never got around to composing one on the subject of traffic lights, and then sending it. You get 350 words and they are pretty generous with their willingness to publish. The fact is perhaps there are several issues that are vexing me at the moment and traffic lights seems a bit too personal to make a scene over. Nevertheless when I saw this front page photo on the Key West Citizen I had one question for myself and that was not answered, or even posed in the short paragraph. 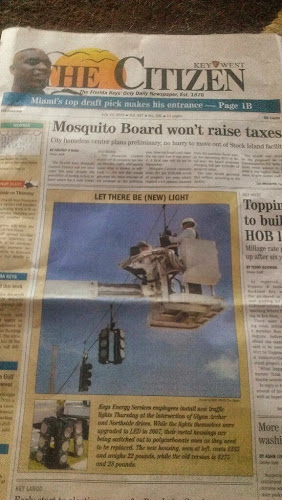 The article was pointing out that the city has a new style of traffic light to install, one that is made of a kind of plastic that is lighter and cheaper than the metal ones used previously. That's all well and good and laudable but my problem is something else. 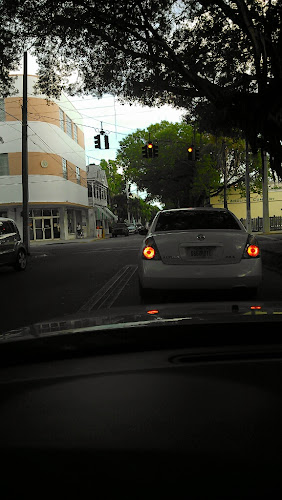 Here's the thing: why do we spend so much time sitting at red lights while the cross street is empty? It's a simple question and as much as I hate to quote how "they" do it "Up North" let me say I have seen the future and it is lovely. Every time I visit Santa Cruz California I am astounded by the speed with which traffic lights change. The amount of time spend idling, and thus polluting the air with fumes and noise, is reduced to almost nothing. Traffic flows smoothly and cars don't race to catch a light nor is there any reason to run a red light. It's amazingly effective. And get this: they have motorcycle sensitive loops in the road and bicycle sensitive loops in the bike lane next to the sidewalks. It is amazing and if I miss anything about life in Santa Cruz it's the swift changing traffic lights. 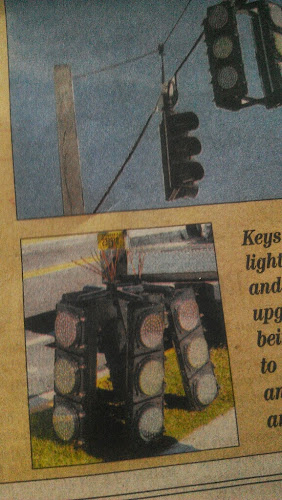 In Key West traffic lights are hell. I don't want to go into too much detail but there are certain lights around town whose timers I have studied and I can, with 90% accuracy, beat the red light by taking a one block detour to pass the light by. It amazes me how few motorists bother on their repeated drives to notice how much time they waste sitting at a red light with zero cross traffic. I meanwhile am making three extra turns and am long gone by the time they look up from their texts. Its not a matter of speeding or driving fast, its simply a matter of ambling past a traffic light that seems stuck on the red for no visible reason and there are lots of them that can be bypassed. Check out this truck on Eaton at Duval. 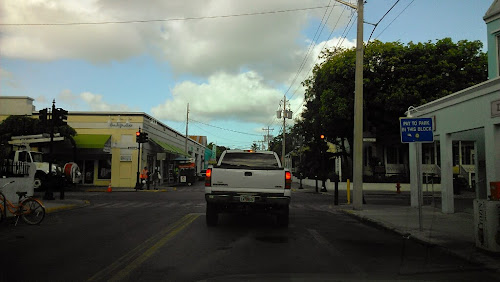 Waiting, waiting, waiting for no reason. No crossing traffic. He waits so long he starts anticipatingbthechange and edges forward. Is this a good use of time, or fuel? Does this help safe driving? Why make him impatient when all we need is a traffic computer to monitor the weight of vehicles in each direction? I don't know why but he pushed out into the cross street anyway: 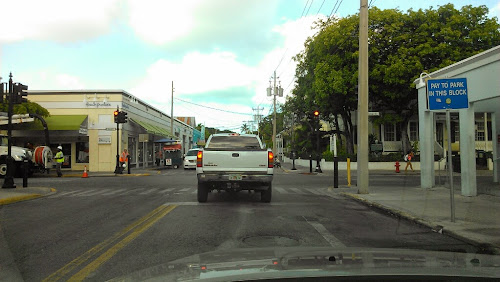 Blame him if you like but he has my sympathy.

In the end what I'm trying to point out here is that it isn't a matter of my finding a way around some of these incredibly delayed lights, rather I would like for people not to feel like a red light merits being run, because if the light changes rapidly and sensibly the red will be of no consequence. Besides that the less time cars spend idling the less noise and fumes they emit. But I see no sign that any of these insanely lengthy lights that create traffic jams are going to be modernized. And I further understand that eventually when the Boulevard is finally repaved there will be more lights than there were before. Oh joy!

I agree with you. I believe there is a law that allows motorcycles and/or bicyclists to run red lights if the electromagnetic sensor is not sensitive enough to detect the bike, and if it is safe do so after X amount of time. I could be wrong though.

This is for California, by the way. Not too keen on Florida's laws.

Florida has no such law - and we can't lane split but we don't have to wear helmets. I want lights to be more repsonsive to any vehicle that shows up at a light. I don't understand why cars have to sit at an intersection wyhen no one is traveling in the cross street. Its nuts.

I noticed the long traffic lights while in Tarpon Springs visiting. It was terribly annoying.

The one new thing to me here in Madison is the blinking yellow turn light. It stays on as long as the forward green is on. Maybe this is nothing new to anyone else, but to me it is!

Roundabouts eliminate a lot of this. WI has gone roundabout mad.

Roundabouts are perfect. Except they simply won't fit in old town. They are also a bit modern for Florida generally. Right on red is a fine north American innovation the rest of the orld could use too. I keep forgetting its illegal in Italy...