Sometimes I get asked what's the hardest thing about living in the Keys and to me it's the remoteness, which is of course part of the romantic appea, of these far flung islands. Its supposed to be a dream to be aspired to, life on a small tropical island. However these (sub) tropical islands are in fact a peninsula as they are connected to the rest of Florida by the nice modern highway. And I love road trips. Ironic that isn't it! I live in a little speck of rock along that distant highway and I like to go for a drive, or a ride, to relax and spend time seeing America. 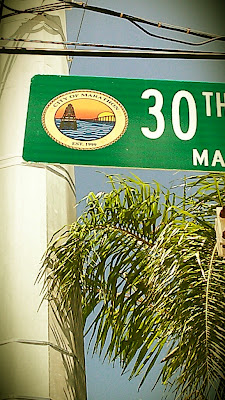 Marathon is the town at Mile Marker 50 along the Overseas Highway that prides itself as the alternative to the end of the line, Key West. The architecture is 1960s funk overseen by huge great triffids, a line if hurricane resistant electrical pylons alongside the road. US Highway One is four lanes wide through the city and that doesn't help the curb appeal. 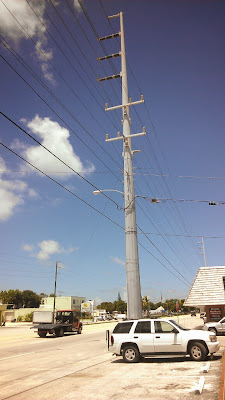 On a hot summer afternoon when I took a brief stop in the city it reminded me a bit of frontier town dozing under the noonday sun. I stuck to the overhangs to find some shade. The palms aren't quite the forest one might like. 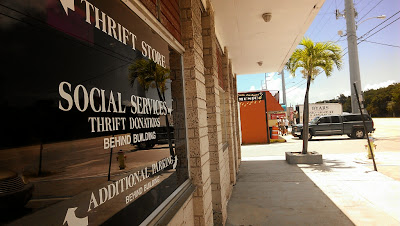 When I talk of taking a road trip I can figure driving up the lone highway for lunch say, or driving to the mainland to see the world outside, and that's where the remoteness comes in. I do enjoy he interior of the state, and the Everglades and so forth but twelve hours driving will see little variety. 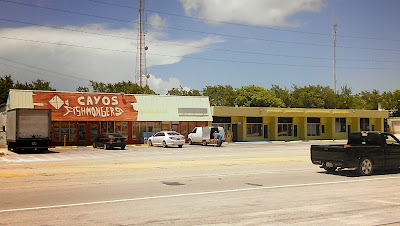 I don't lie Miami, it's a town leaking a core, architecturally it's uninteresting and the competing Latino cultures fail on some monumental level to create a desirable exotic destination in what could be a truly exciting city. Miami is a mixture of shady neighborhood slight industrial suburbs and superficial glamor on the beach. I find Atlanta more appealing and New Prleans more intriguing and Austin packed with more culture. So a road trip to Miami is a trip to nowhere. 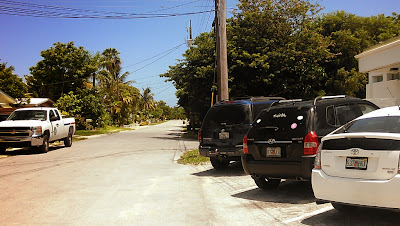 I wish Marathon could really compete with Key West. There are places to eat, there's a single screen movie theater and a community playhouse. There's a nice deli and liquor store close to the Post Office and the Publix supermarket is outstanding. I'm told the K Mart is one of the most successfully in the country not least because there is no competition. 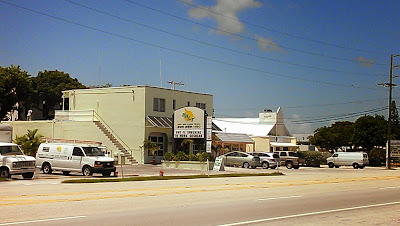 I don't know what the rents are like but some businesses come and go and others stay. The population of the city is half that of Key West, around twelve thousand and the cities are an hour apart. So there isn't an easy cross over between one and the other. Marathon is a fishing town with working class roots and all that's age making. Key West is gay, and fruity and literary and pretty and sucks up the advertising dollars at the expense of the other islands. Except of course that Key West is the premier destination in the Keys. 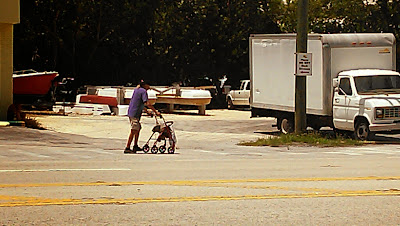 Would you ather walk the Key West cemetery? Or cycle the lanes of Old Town? Your choice. 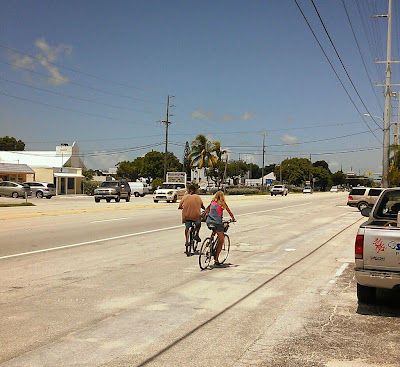 The's access to water here but there aren't much in the way of destinations, no off shore islands to anchor out near, and you don't feel connected to the past, even though I am a bit critical of Key West's myth making n that area... 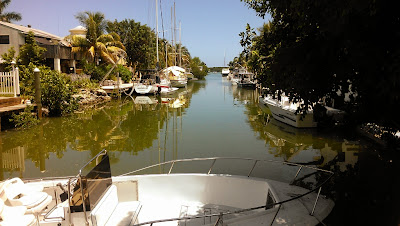 They have a good newspaper here and the Keynoter reports stories so well that the Citizen puts out a local edition Wednesdays for middle Keys residents. 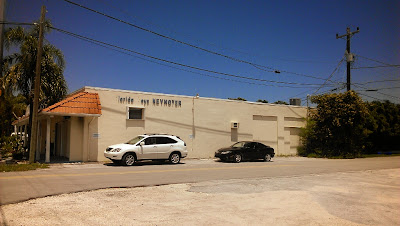 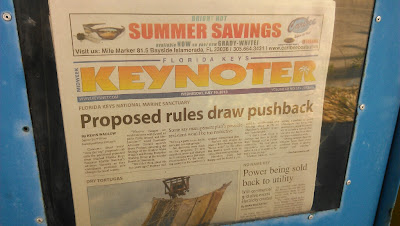 They formed the city in 1999 as a protest against Monroe County's apparent indifference to the communtiy's needs and contributions. The county has a decent library here in a building as pretty as you'd like, a Shenriff's substation with deputies assigned to police the city, a hospital that I like a great deal more than the mess in Key West that advertises incessantly for patients. Sombrero Beach is really nice too, Key West Diary: Sombrero Beach. 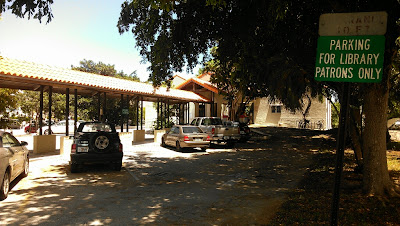 The county offices are staffed by friendly clerks and again I like to come here rather than Key West because I live half way between the two I get the choice. The clerks here work in Big Pine three days a week so I don't have to do much business in the count seat. The harbor is the best in the Keys and is a fabulously secure anchorage by local standards among these exposed rocky islands. Key West Diary: Boot Key Harbor. 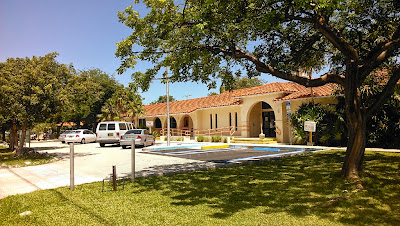 Naturally Key West's leading developers of everything not nailed down have their name out front even in modest Marathon. The Spottswoods operate the only chain motel in the city, a Holiday Inn Express The Holiday Inn Express & Suites Marathon (FL) - Hotel Reviews - TripAdvisor where if you have a dog you'd better plan on staying a while as they charge seventy five bucks per stay for pets. The competition was also built by a Key West developer Pritam Singh. The man who built Truman Annex put up Tranquility Bay in the "Key West style." So why stay here rather than Key West? When I'm looking for a destination for a day trip what do I do? Yeah sure, we can ride to Marathon and have a fish sandwich, hang on the beach and take home a bottle of wine from the liquor store, and that's it. How many choices of destinations do you have for day trips from where you live? 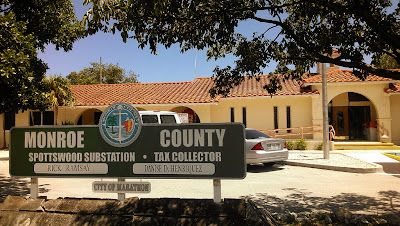 The killer is this isn't a particularly cheap town either and it's as though the weather and the fishing, on the already devastated reef, makes up for that. I don't know how a jewel like this can be stuck in the 1960s, exploited and worn down and ugly. I look at Key West's future and I wonder what's in store for that city on the brink of massive change. I like to imagine a better future for Key West and the islands leading up to that fabled city, a prosperous future for workers and bosses if it's done right. Gentrification is an issue but the way I see it working people can barely hang on as it is so you'd think everyone could benefit from a vision for the islands. It's like this Eden is running at half speed and in a world of less money and less energy and less possibilities we all need to do more. 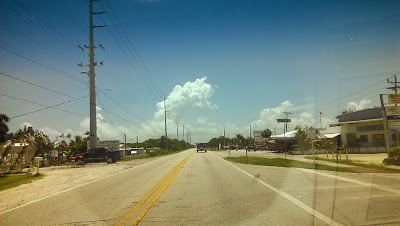 I know I'm dreaming because this is the Keys a place where people come to hang in the sun. I'm one of the lucky ones with a good city job, benefits, time off, and bosses who take care of their workers but my good fortune as a low man on the totem pole isn't the norm. It's true I do have to show up sober and ready to work but the rewards are palpable, and in this economy I am amazed to see how lucky we are in our jobs and how much we all appreciate them, including the youngest among us in my office. I wish other people in these fabulous islands could be so lucky, but it's going to take leadership to share the rewards of developing a vision for the Lower Florida Keys. 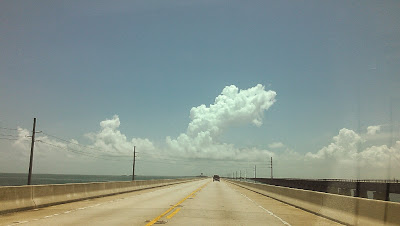 Marathon, gateway to the Fabulous Lower Keys and the one-of-a-kind Seven Mile Bridge. And you'd never know it.

I like that you have some choice for day trips and it sounds as though you want to go there on occasion.

We have a lot of choices for day trips in our area, but most we don't want to go to. How sad is that?

In finding a vision for the Keys, what might be all the ways to do so?

And to converge on that divergence, what would the Pareto rule produce?

Trobaritz: I don't really have much choice or day trips but I make the most of what I have....
Jeffrey you ate a pain in the best possible way. Honestly I have no idea what the vision might be but at the moment no one is looking anywhere further than the end of their noses.
Maybe that's godd enough.

Day trips, road trips are nice. I never thought about how it feels being way down there in Key West, far away from anything, or anyone else. I guess you, too, need an escape on occasion.
Interesting your take on Miami. It's so different from Arkansas, so I immediately fell in love with the area...and the Keys as well.

sorry, I'm a Indonesian gay. 27yo. I worked
At hotel as a kitchen crew. Looking for special friend around in the world, the
same thinking should be faithful in a relationship. I
dont agree with the traditions of free sex. that the
risks of venereal disease. I love mature men. not just that
the old age. but the heart and mind come ripe.
I just an ordinary people.
Indonesia, I live in belitung island. East of sumatera. Any 6flight /day from jakarta.
Belitung is new tourism route in indonesia.
Over all, my contact :
Phone : +6285664600785
Facebook : balaiselatan@gmail.com
BBM : 219ac6dc
Thanks guy...

sorry, I'm a Indonesian gay. 27yo. I worked
At hotel as a kitchen crew. Looking for special friend around in the world, the
same thinking should be faithful in a relationship. I
dont agree with the traditions of free sex. that the
risks of venereal disease. I love mature men. not just that
the old age. but the heart and mind come ripe.
I just an ordinary people.
Indonesia, I live in belitung island. East of sumatera. Any 6flight /day from jakarta.
Belitung is new tourism route in indonesia.
Over all, my contact :
Phone : +6285664600785
Email : palatmerah@gmail.com
BBM : 219ac6dc
Thanks guy...