There Is No Alternative 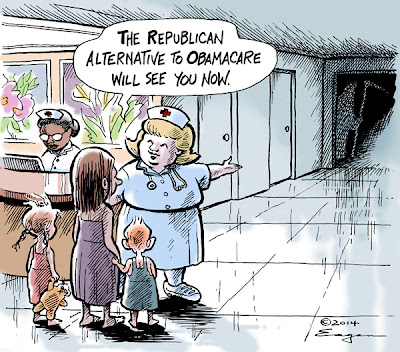 It takes the wit and wisdom of the incomparable Santa Cruz cartoonist Tim Eagan to point out what no one else will: as much as the Affordable Health Care Act sucks, it's not like opponents have developed a better idea. Me? I'm for Medicare for all,  funded by deductions like Social Security. If you want your own gold plated policy buy it for yourself. But as I am fond of saying, I've never met anyone who dumped Medicare or the VA in favor of buying a private policy from the vampire squids of the private health insurance scam market.
From Huffington Post:
Dr. Danielle Martin, vice president at the Women's College Hospital in Toronto, totally schooled Sen. Richard Burr (R-N.C.) on health care Tuesday.
Martin was in Washington D.C. to answer questions from a U.S. Senate subcommittee led by Sen. Bernie Sanders (I-Vt.) on different health care systems around the world. When Burr asked Martin "on average how many Canadian patients on a waiting list die each year," she answered with a fact about the American healthcare system.
"Do you know?" Burr asked.
“I don’t, sir, but I know that there are 45,000 in America who die waiting because they don’t have insurance at all," Martin said.
But that wasn't the only question Martin schooled Burr on. There was also this exchange:


Burr: What do you say to an elected official who goes to Florida and not the Canadian system to have a heart valve replacement?Martin: It’s actually interesting, because in fact the people who are the pioneers of that particular surgery, which Premier Williams had, and have the best health outcomes in the world for that surgery, are in Toronto, at the Peter Munk Cardiac Center, just down the street from where I work.
So what I say is that sometimes people have a perception, and I believe that actually this is fueled in part by media discourse, that going to where you pay more for something, that that necessarily makes it better, but it’s not actually borne out by the evidence on outcomes from that cardiac surgery or any other.

Posted by Conchscooter at 9:49 PM

I just received my second Heart in-plant from VA 19th of last month.

and how much did they charge?


I paid for it and all the other excellent healthcare I have received through VA over the years, with my service to our country.

The thing is, as you can see, single payer works! And we all contribute with our service to the community we call a nation. We all deserve excellent medical care without the hassle of fighting private insurance companies.
Propaganda notwithstanding.

With all due respect, the health system in both Canada and here at home leave much to be desired. Two very good friends of mine waited for over a year in Canada for treatment for their illness. Both died before treatment.
Jus saying..

45,000 Americans died for want of health insurance. And countless more have been driven bankrupt.
So we either get raped by insurnace companies or have to wait?
What exactly is the Republican alternative to ACA?
PS I'm fine thanks with my city paid health insurance- so far. I plan to negotiate away my 20% co-pay if i can. we have done this with my wife's relatively minor surgeries so far...