Taking A Bite Out Of Apple

I don't know why I upgraded my mini iPad to iOS8 in retrospect, but I remember thinking that if I didn't do the damned upgrade that little number one would be sitting there on my screen like a nagging teacher telling me to get with the program every time I opened my portable world of computing. So I upgraded without thinking about it too much. Until my mini iPad stopped working. I called Apple Tech, I downloaded iTunes to my wife's laptop, I backed up the iPad and scrubbed it etc... and still it was working like an Old World dial up signal. In desperation I took it to Keys Technology to see what they might do. As you can see they do a land sale business fixing broken portable gadgets and their vulnerable screens. I told her she looked like a watchmaker. 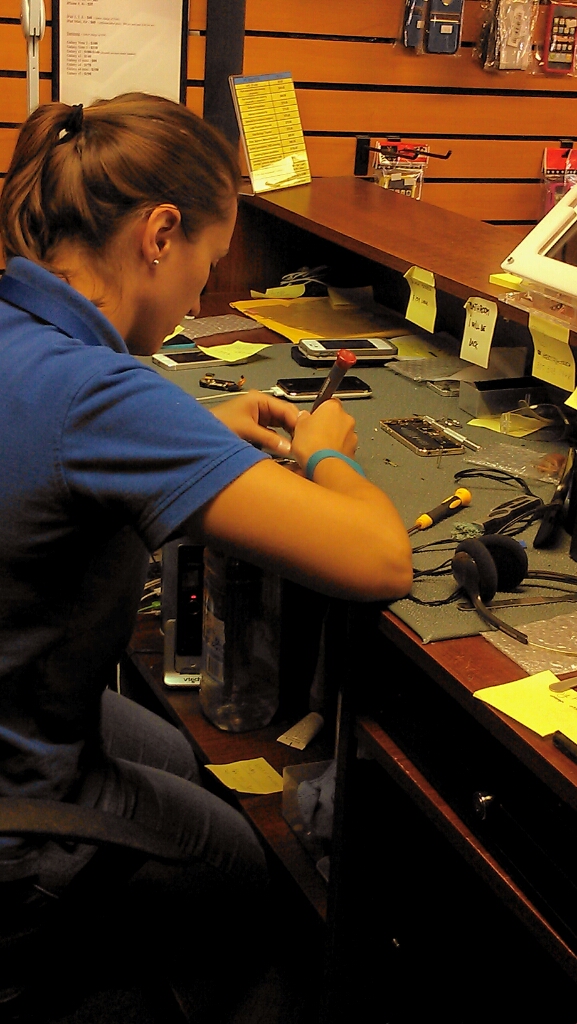 My mini iPad, which is how I do all my computing these days went into the abyss in back. They scrubbed and backed up and nothing worked. I read my Kindle on my phone and hoped for the best. People came and went including a group of young people who put the fear of God into me but were remarkably well behaved. I generally find Key West youngsters of all ages to be unusually polite. Perhaps my beard intimidates them because not everyone agrees with my assessment of local modern youth. 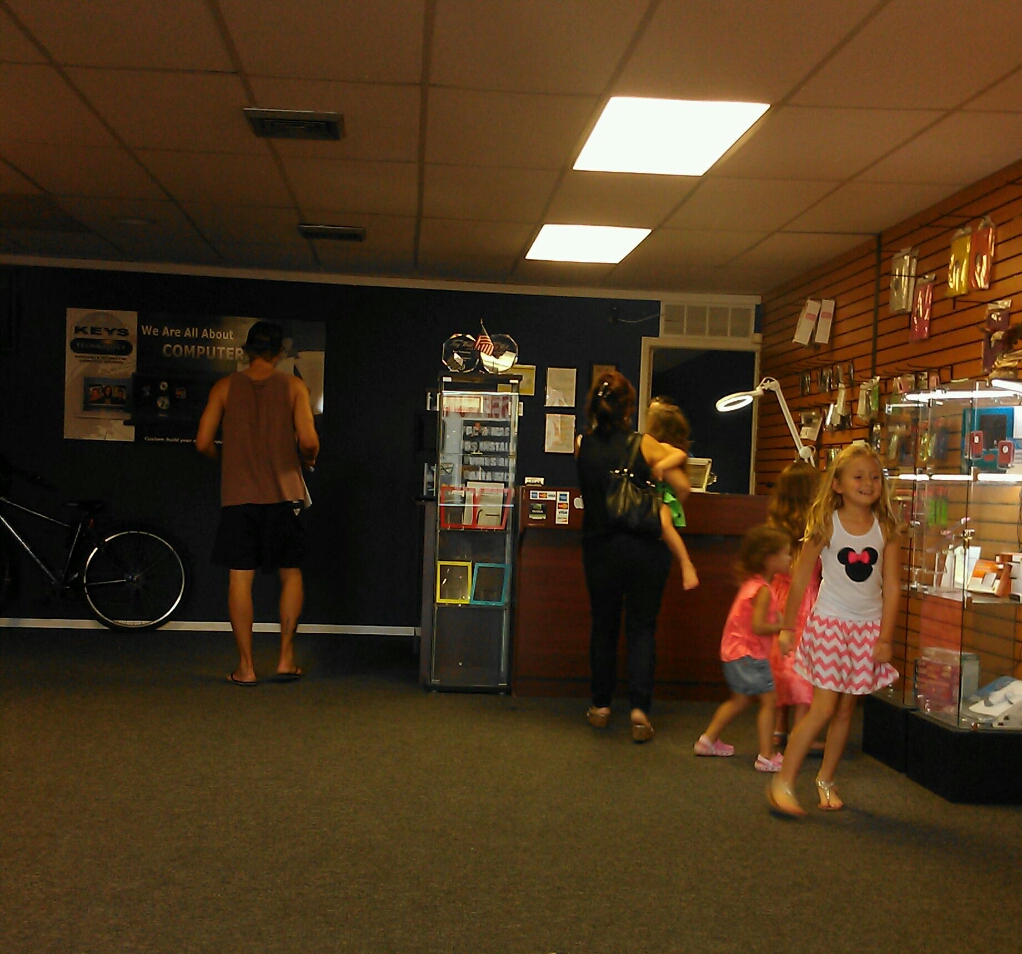 No luck; my iPad is screwed by iOS8.2 Thank you Apple. Disconsolate I went home and in desperation scrubbed one more time and instead of using the backed up stuff I rebuilt the mini iPad myself as I only use half a dozen apps anyway, including Blogsy which I use to blog on my iPad; quick and efficient it is too. Somehow that final reboot helped quite a bit and now most of the time the iPad only hesitates slightly. And then sometimes it refuses to open a page. It looks like I'll have to replace it with another refurbished mini sold by Apple for $219. Grr. I don't use an iPad with built in wireless as I have a phone hot spot for cheap and most of the time I run it at home anyway. So I suppose I could be out more money but this upgrade stuff has me pissed off, and a lot of people have been far more damaged by this upgrade. Next weekend I will be on the mainland and my wife plans to stop by an Apple store and try to shame them into a discount for screwing up my perfectly good mini iPad 2. They had better get their flame retardant outfits on as she is pissed off. 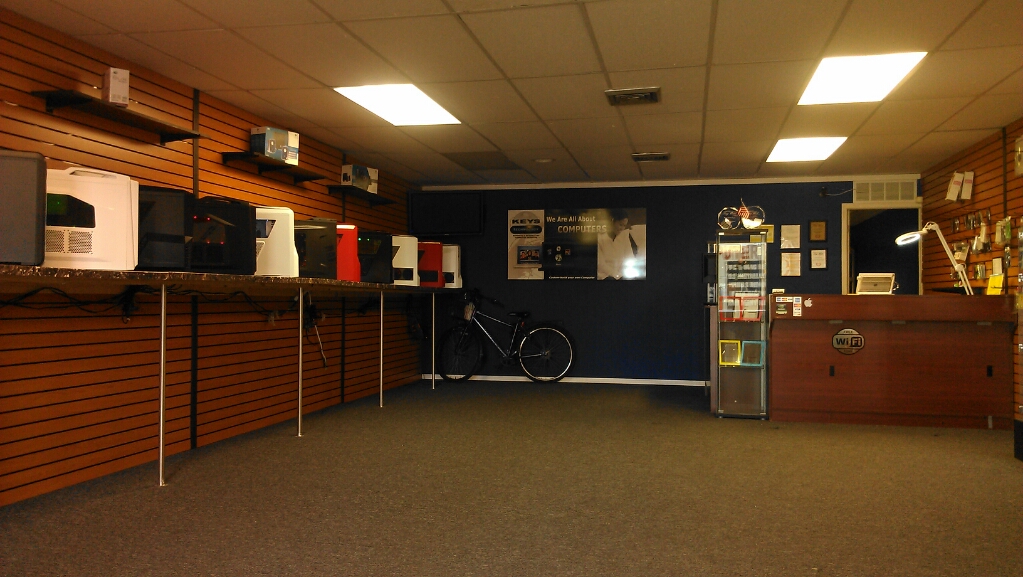 I took the picture above as I sat in their excruciatingly uncomfortable, but modern looking chairs, and I was struck by the old fashioned commuter vehicle parked among all the high tech machinery. A bicycle at least doesn't get tripped up by a stupid operating system.
Posted by Conchscooter at 8:53 PM

Isn't it still under warranty as it's less than a year old. I'm running iOS 8.2 on my iPhone and iPad Air without any problems. But then again, I don't rely on it as my sole Internet device.

No its long out of warranty. And I suppose the good news is that its SNOWING in Alaska so my envy of your iOS8 is mitigated. People here have had all sorts of connectivity issues with this stupid upgrade. I hope Apple burns collectively in Hell for messing with my life.

"Most" people purchase the extended warranty for such devices. Mind, some don't. Maybe you did not?
Still at least you have your wife on your side, maybe she can persuade the dorks at the Apple store to repair or replace the device. Just how far out of the warranty is it?
And I NEVEr do an upgrade even if the darn little numeral tells me to do so until two or three months have passed. And that goes for both Microsoft and Apple, and Linux.( Iutilize all three in various capacities. The systems are designed by humanoids, all of which make errors.

I updated my iPad2 to OS8 last week and I am hating it. It pauses, it doesn't connect to wi-fi at the coffee shop without trying 12 times. If you open a new tab then click back on the first one it is blank and I have to close safari and re-open it.

Did I mention I wish I hadn't updated? It is functional, just really fricken slow and frustrating. Bad words have been said.

Yup all those issues. I am not at all good at dealing with these issues. And yes no more upgrades. Bastards at Apple deserve a nasty waiting disease...on no wait, health care workers in Dallas are getting that right now.
Fresh perspective: this is a first world problem.

Barbara had the same issues. Steve Jobs is gone and the Apple that we loved is apparently gone too. So sad.