Supposing you were out and about in Key West one night, admiring public Art as you do, and you came over all funny and needed refreshment. What to do? 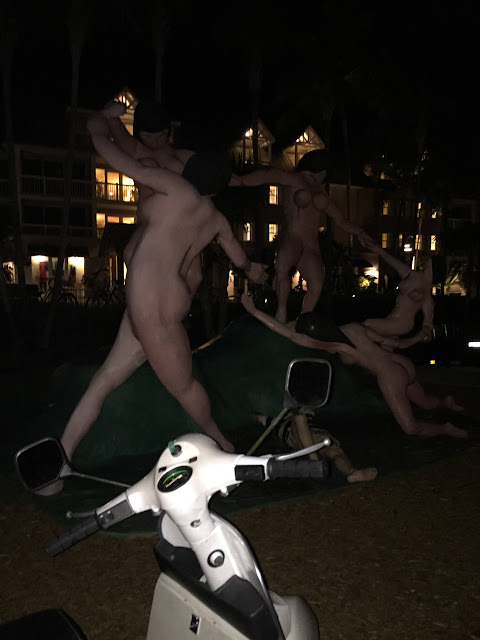 Sometimes it is more pleasant to enjoy public monuments in the early hours when the crowds are slack and you can gain a proper appreciation of otherwise unremarkable places thrust by chance into the lists of desirable places. If for instance admiring Mile Zero of the Overseas Highway you were overcome by a need for beer, or soda, or chocolate or Funyuns what would you do? 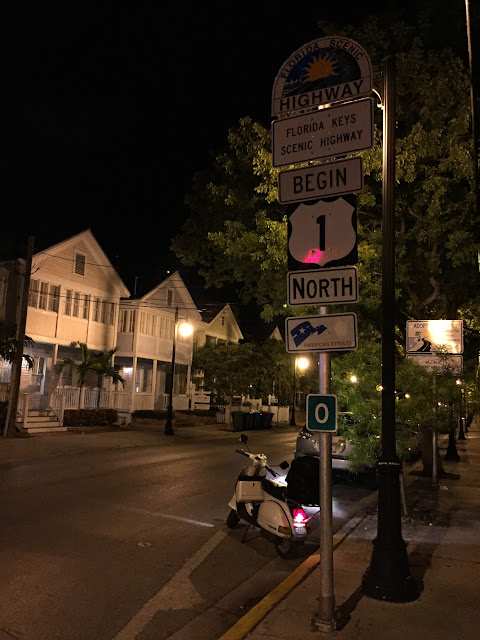 Key Lime Pie at three in the morning? Oh no! What to do? 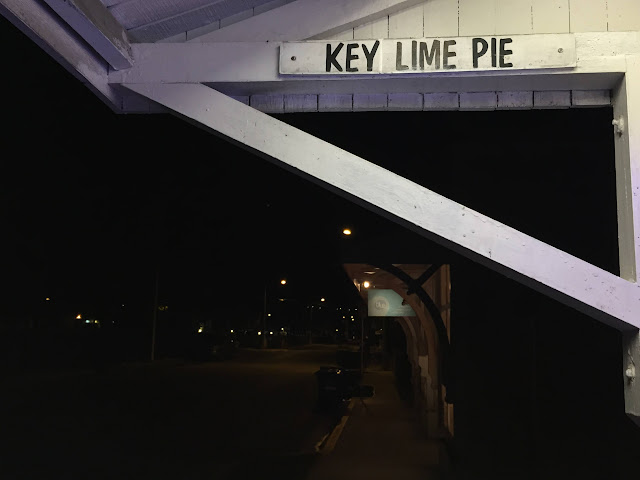 Sometimes people feel like they might get lucky long after the sun has gone down and that would be the perfect time to buy a lottery ticket, what the more skeptical among us view as a tax on the mathematically impaired. However hope springs eternal and this being America when  you gotta go, you gotta go and there are 24 hour places to shop in this strange small town. 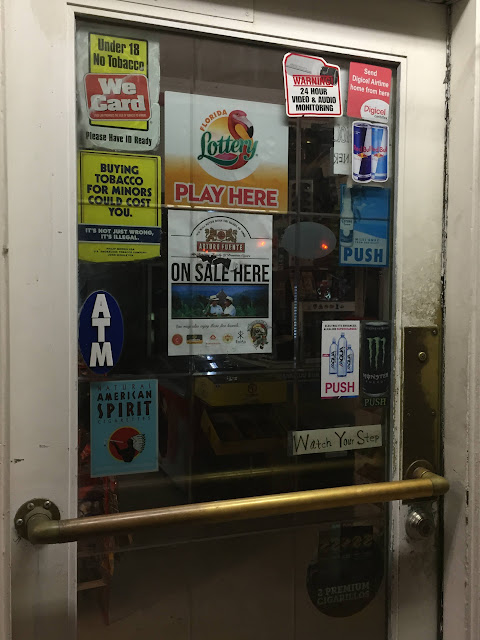 Locals used to call this the Arab Store (as in Aay-Rabb) for the very good reason that the owners were from Bangladesh; I know, I used to chat with them from time to time. The fact that Bangladesh is only about one third the distance from Saudi Arabia as the US would no doubt explain this misplaced nickname for Far Eastern operators of this shop...that or pure ignorance. Someone else owns it but I expect it will be the Aay-rab store for a long time to come! 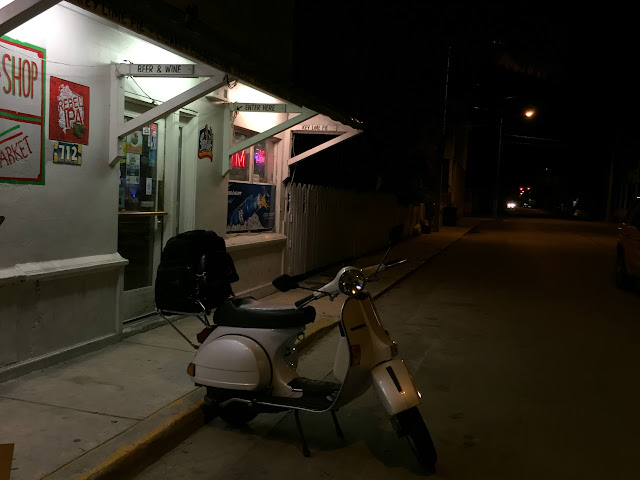 This next one, further up Caroline from Duval Street used to be known as Maun's ("mor-n's") because the Maun family, well placed in the hierarchy of St Mary's Catholic Church, used to operate it. Now it's known rather blandly as The New Market. It is across the street from Harpoon Harry's and is equipped with a bum magnet for some reason. 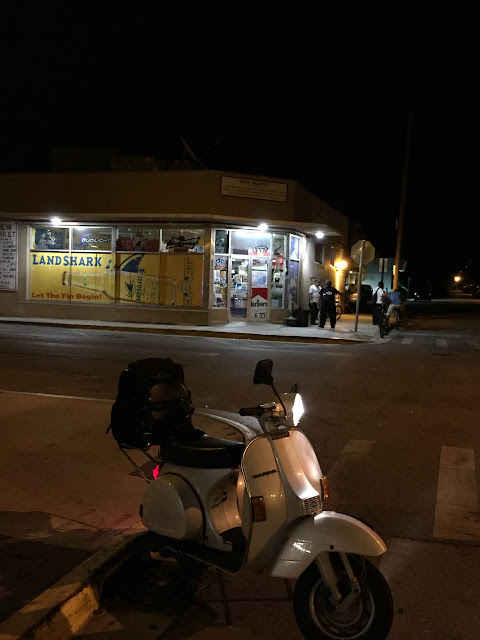 Charlie's Grocery on William Street is a funny old place, not open 24 hours as you can see but interesting in its own way if you aren't in desperate need of junk food at an ungodly hour of the night. Come by during the day to catch up on your Bollywood soap operas inside the cement block building. I don't know how these people make a living but they do and quite well it seems, for this lot sell nothing spectacularly interesting as far as I can tell but they plug along. 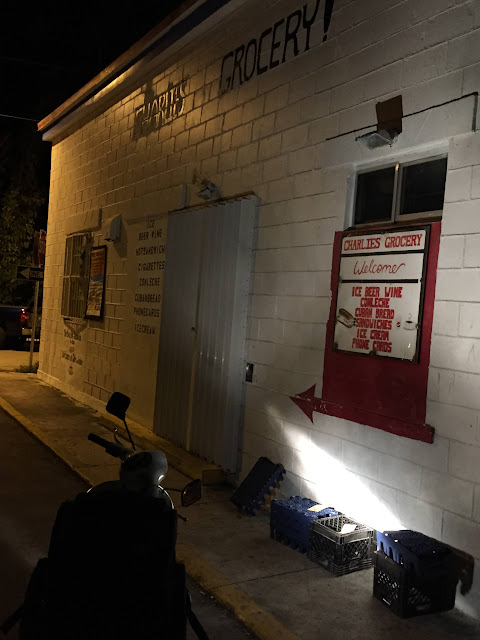 Similarly here, not far up Windsor from Charlie's at the corner of the cemetery, another  almost identical inconvenience store, wrapped in brick this time. I have no idea why people walk, jog and trot around this town clutching bottles of excessively heavy, rapidly warming bottled water as they go. If drinking water carefully packaged in a throw away plastic bottle is essential for you, then you can find fresh icy cold ones everywhere in Key West. 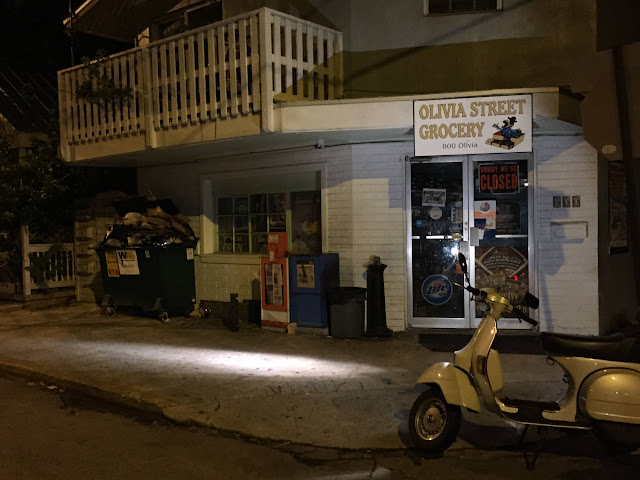 The nexus of all convenience stores is here at Truman and White Streets, with regular gasoline sold at nearly $2.90 a gallon, and Citgo sells Dion's Fried Chicken Done Right (Link) all night long. Connoisseurs tell me the coffee at the Chevron is better but here you have the makings of a hot time in the old town at night. By the way alcohol sales stop at four am and cannot resume before 7 am according to some arcane accounting of the law which I suppose wants to give your liver a brief rest in the 24 hours of the day. Makes no sense to me but there we are. 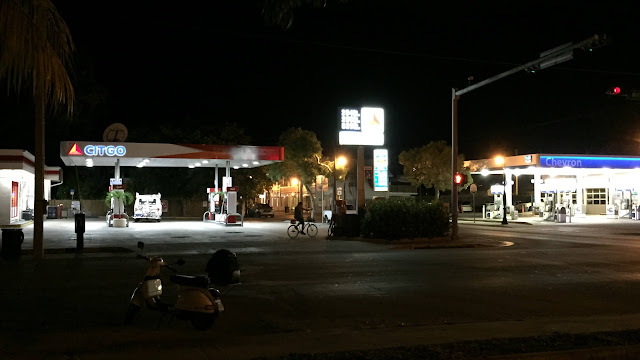 The Lime Tree Food Store on Flagler wedged between Bertha and Josephine Streets, it's much smaller than it looks outside though it is equipped with a vast parking lot. I don't know why but it strikes me as rather seedy and I'd rather get my soda at the Gas station on North Roosevelt a couple of minutes away on First Street. 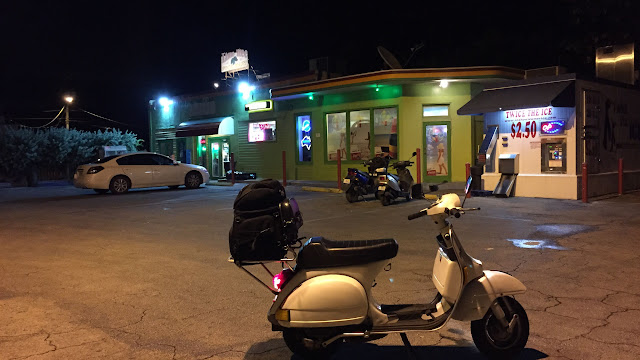 Further up Flagler we have Habana Plaza wrecked by Hurricane Wilma in 2005 and restored into a vaguely Art Deco style of building with the rather picturesque portico which these days mostly serves a temporary city hall filled with city workers waiting for the White Street school renewal project to be finished. In the middle of all the city offices there is a convenience store, Atlantic Grocery, so named for no visible reason that I can think of. There's a Cuban coffee shop next door operated not for tourists necessarily so if you get your bottled water and your  con leche here you are a bit off the beaten track. A bit. 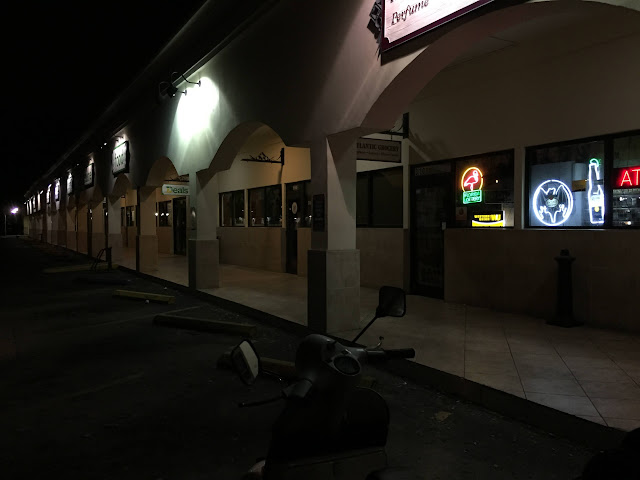 On your way out of town on Flagler Avenue the Mobil Station has Dion's chicken (the chicken is available all the way up to and into Homestead on the mainland). Not open 24 hours, not on my usual path, but here and useful nonetheless. 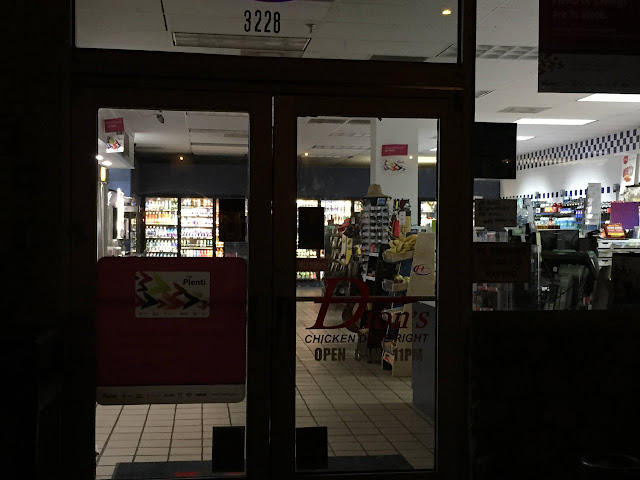 The main road into Key West, North Roosevelt Boulevard, "the Boulevard" as it's known informally, is stacked with mainstream America neon, chain stores, large parking lots and all the paraphernalia of multi- lane traffic. There are Circle K stores and Shell gas stations aplenty and they are what you'd expect. This one is a 24 hour place at Kennedy Drive: 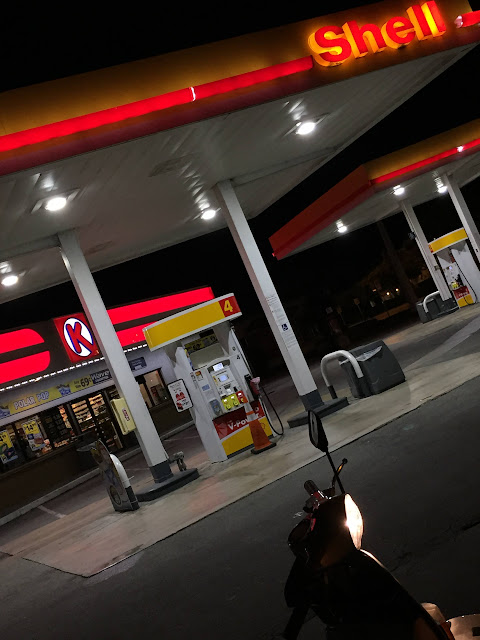 The only 24 hour bona fide grocery in Key West is Winn Dixie in Overseas Market, as Fausto's and the two Publix markets close each evening. Across from Winn Dixie one of the many national chain pharmacies has all night neon: 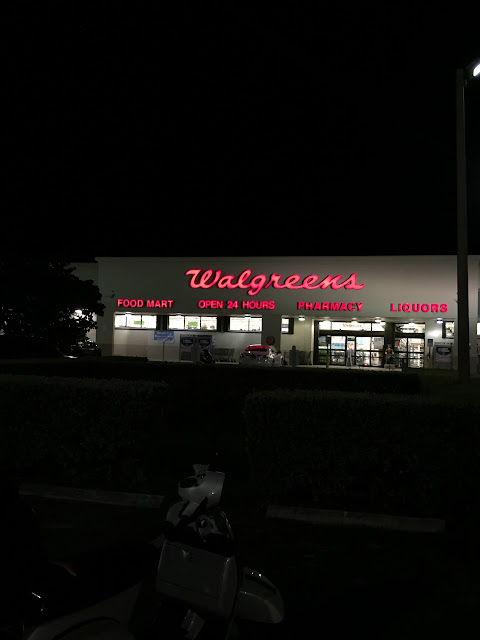 Here's a thing, my Cuban acquaintances swear by the coffee and food in the little Cuban kitchen in the Shell gas station at First Street, but it's not  24 hours. I frequently stop at the Circle K across the street on my way to work or during my lunch break if I want a Coke Zero to drink at the waterfront. Or if my gas guzzling two stroke Vespa needs a refill in its  tiny tank. 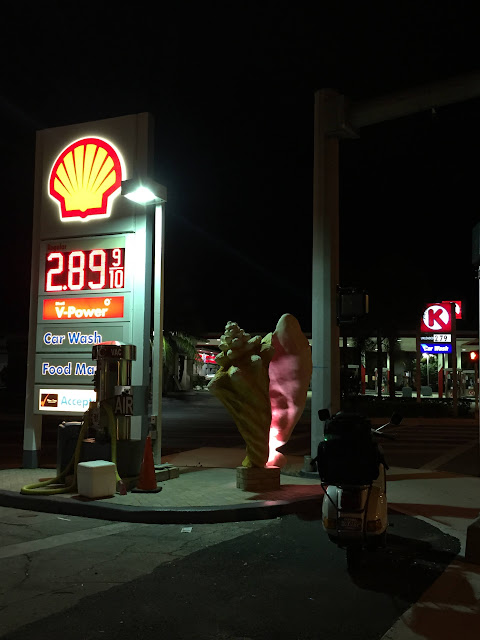 I hope this incomplete tour dispels the notion still fondly held by some visitors that visiting Key West rates in the adventure stakes with driving across the Gobi Desert or hiking the Karakorum Mountains. Just to complete the picture there are 24 hour gas stations all the way up the Keys very dozen or two miles, Stock Island, Big Coppitt, Big Pine, Marathon and on and on. Stock Island has a Tom Thumb in addition to the Chevron gas station. 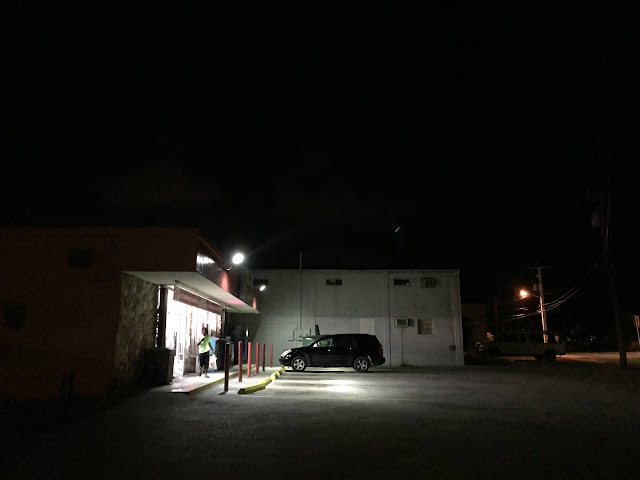 It's a speck of light in a very dark world at three in the morning and people were still out shopping. 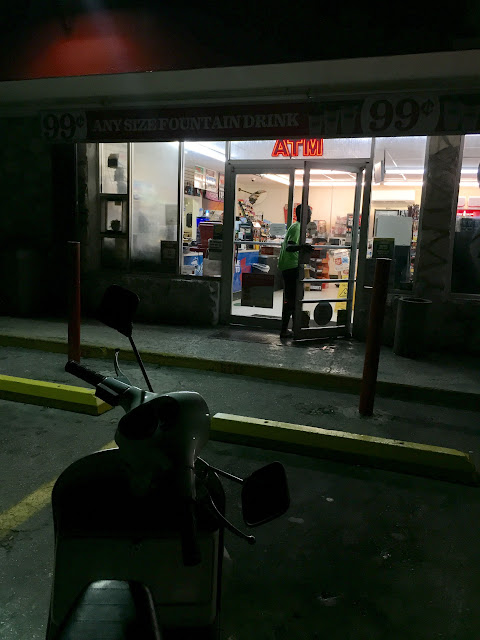 In the Florida Keys you need never run out of ice cold expensive tap water in a bottle or your choice of gas, ethanol free gas or diesel. These islands are really very civilized, at all hours of the day or night.
Posted by Conchscooter at 12:00 AM

Thanks for the tour!

I am surprised at how many places are open that late and 24 hours.

I am, unfortunately, sound asleep at those hours. There are probably places open all night around my house, but I just don't know. Maybe one day I will stay up past 10:00.

I remember a good few years ago some Cubans landed in Key West and were surprised how quiet the city was compared to the early morning hours in Havana.

On the other hand I get calls at work from people anxious to know if they can buy gas on the drive down the Keys. Why they call the police I don't know but worrying about that stuff in the U.S. seems odd to me. Even in the western deserts it's hard to go fifty miles, 45 minutes, without facilities.

Now everyone can be reassured!