Best Of The World

I was moved to write this essay by the title of a recent National Geographic Traveler Magazine. They selected twenty places for these irritatingly repetitive "bucket lists" that are so popular. All sorts of places were mentioned, including Bermuda, Winnipeg, The Philippines and San Diego and Glasgow (no really!) as well as Poland and Botswana. Lots of neat places but of the Florida Keys not a peep. Mind you, there never is in any of these lists.  Places to retire, small towns, resorts,you name it Key West is never listed among them. Ever. 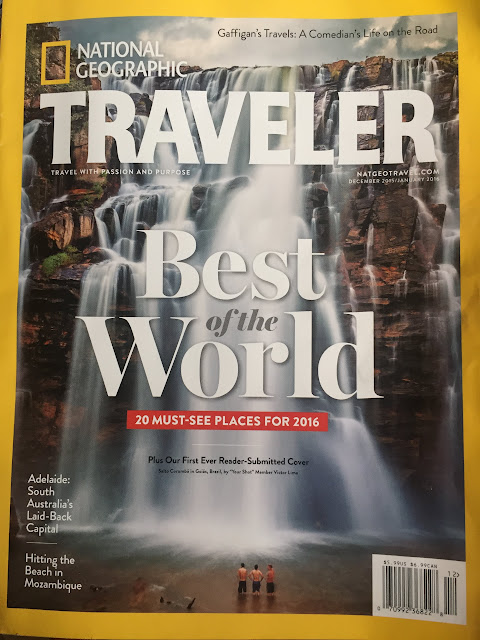 I have to say it bothers me and not because I think Key West should be on one of those many over listed lists. What bothers me is that I can see why Key West is slipping out of the rankings of cute desirable places to visit and hang out in. On the one hand you could argue that's a good thing, staying out of the limelight, but Key West's  fame has already spread far and wide and nowadays it is attracting it seems to me the wrong kind of people to keep the community vibrant. A not untypical petulant comment posted in the Citizen's Voice: 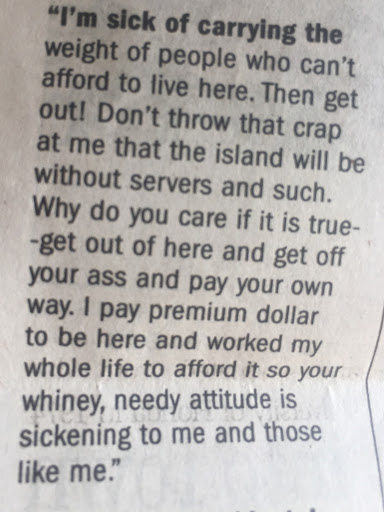 So the question then becomes: do you want to live, even if you can afford to live here, in a small tight town with people like that? Cruel, tone deaf, rejectionist elitist- call it what you will, perhaps even severely practical, the problem is that it doesn't allow a  town to pull together and be creative and without creativity you end up dead. The mayor has had one bee in his bonnet for a long time and it's coming together the new twenty million dollar  city hall. He absolutely wanted it built at the old Glynn Archer School on White Street and there it is, coming together behind the grand facade of the school, a building properly imposing as  a seat of government. Aside from that it is practical, in a good location with easy access while not cluttering up Old Town and lots of parking, not too far from the Police Department, the other major organ of city government. The mealy mouthed angry little people call it too expensive but it will do the job and look good, its form of artistry worthy of a city that promotes itself as creative. And with less and less reason to think of itself as a  hib for creative people. 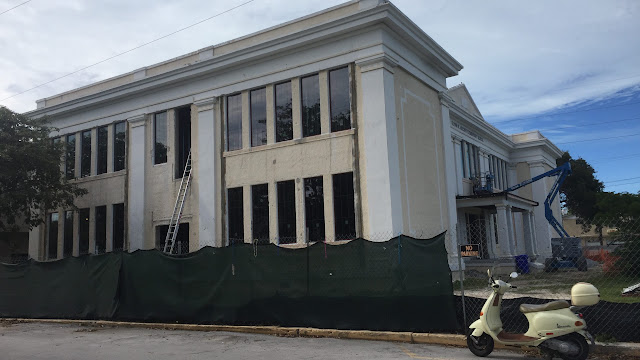 One big issue for people who don't have enough money is the cost of housing. The military built housing on what could have been a public park decades ago and then decided they decided to abandon the housing and give it to the city. The city has the opportunity to buy the housing and has decided to hold a referendum on whether or not to spend $55 million dollars to buy the property whose houses currently rent for $2400, affordable perhaps in some other universe. The thing is the developers bought the land a few years ago for $35 million and half the city is wondering why they get a twenty million widnfall for nothing from the city. 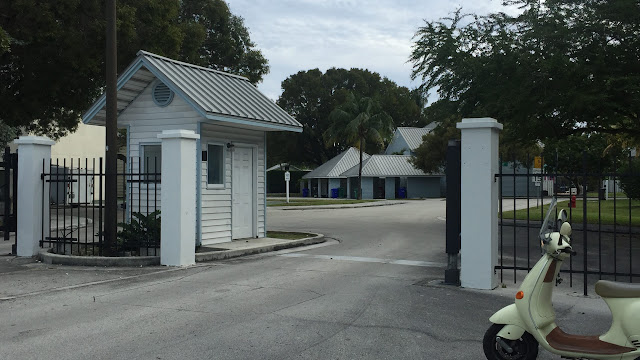 Like everything that happens in this city the deal has an opaque quality that would make Machiavelli proud. The terms of the deal, the repayment terms the cost of the housing to renters none of it seems very clear. And the referendum is split in two, one to consider the deal the other to authorize the borrowing. One without the other would be an interesting result...Meanwhile life in Peary Court trundles on. This field is where the credit union used to be: 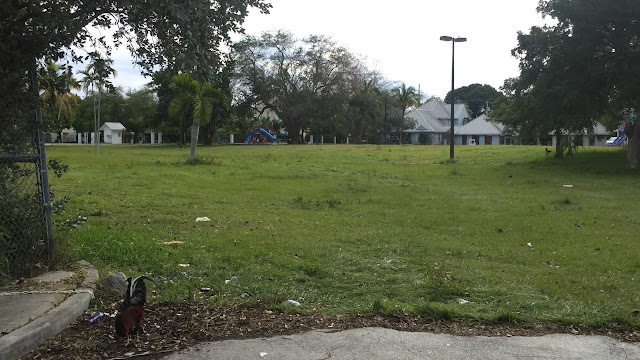 One beacon of light downtown is the Studios At Key West which managed by some miracle to buy the former masonic lodge on Eaton at Simonton. The vast Art Deco style building is being transformed into all sorts of good things for artists and it includes a book store recently opened on the ground floor which merits exploration. The Studios is the kind of non profit that should be nurtured and should flourish in a  town with pretensions toward being a desirable community in the 21st century. Key West is relying on the weather  which admittedly is brilliant year round but there has to be more of this sort of thing, despite the sour puss attitude shown by some heathens. 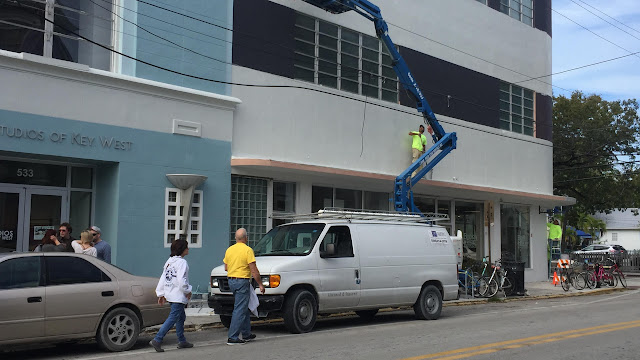 For me the measure of the possibility that this city might turn into a cultural hub will be demonstrated by the development plans for Truman Waterfront. Another deed to the city by the Navy here we have 34 essentially virgin acres, cleaned up and ready to be developed by the city. A waterfront gift from the gods. If the Spottswood juggernaut gets its way this will be paved, cemented and sealed as a restaurant, marina, amphitheater, sports fields and soulless center of industry and commerce lightly disguised as pay-as-you-go recreation. 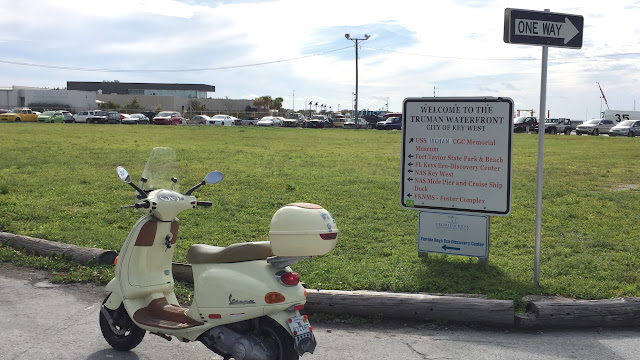 If Key West is to attract young people with talent and old people with souls it needs to do something radically different from the current slide into obscurity as a laughing stock of outmoded urban values and endless pursuit of the easy dollar. Now we hear that Fantasy Fest is losing money for the company that runs the October strip tease on Duval Street, not to mention the money spent by the city for this absurd spectacle. Shops not associated with the week-long bacchanalia report lost sales and somehow the bars and eateries who make money prevail over everyone else's opinion. 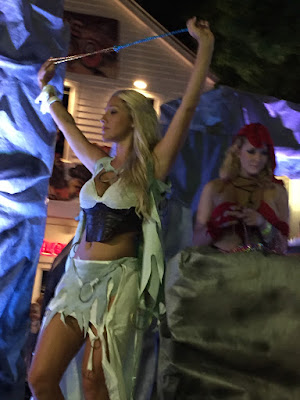 I cannot say I view this sort of thing as a substitute for something more appealing though if one wants to seek a middle path between the Conchs that loathe it and the business leaders who push it strenuously I'd say it's easy to ignore if you choose by getting out of town for a week. But if it can't make money then I have no clue why it continues to flounder on as a festival anyone needs to see. 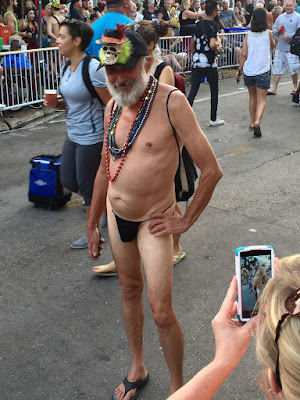 I feel a certain amount of anguish about Key West these days. My life here marches steadily on to retirement in a  job I enjoy with an easy commute and a quiet canal with tidal water in my back yard. I have no complaints but I do want to live in a community, a place where the ecosystem matters, where people can make a living and even if the halcyon days of the cookie lady and the Copa and adult movies on Duval are gone there is no reason the city can't restore a sense of wonder to the tired old painted tart Key West has become.
Posted by Conchscooter at 12:00 AM

I'm trying to remember what I thought of Key West the very first time I visitied it, which was in 1982 together with my then-girlfriend. We were students living in Boca Raton and she was a Florida native, she really loved Key West and so wanted me to see it. I had just arrived from The Netherlands. For the life of me I can't remember hardly anything about the day we spent there. But it wasn't enough to make me come back, anytime in the nine years that followed and saw me live in Boca, West Palm and Tequesta theoughout the eighties. Was 1982 not a 'good year' in the history of Key West? Seems like it would have been more like 'the old days' compared to now. Anyways, fast forward to 2012. I've been living in Europe again since leavjng Florida, I thought for good, in 1991. My family, all Dutch, and I stumble upon the Keys on a sentimental yourney where I show them where I spent almost a decade of my life, and we fall in love, particularly with Key West which reminds us of our native Amsterdam. My wife is an artist. We end up buying a house on Big Pine which we rent out on a monthly basis to what seem to be some of the nicest people you'll ever encounter, and we will retire to Key West, if we can (visas, visas) year-round but if not as much of the year as we're going to be allowed. So moral of the story for me is that Key West is still very attractive. I just hope my wife and I don't qualify as the 'undesirables,! ;-)

This is such a good essay. Michael, you should be way more involved in Key West, officially.
HARC is a true mess with some of the things they allow , and often, promote, and with that windfall of $20 million for developers, why didn't Historic Harris School reap the benefits.? I have always thought that should be for ARTISTS, free for " the best" 20 - 30, in USA. They should lease these out annually, as studios to most promising painters, sculptors, etc. , for a vey low price and it would , in turn, strengthen Key West's reputation and ethics as a beacon for " beauty" ; for " green".
How ever many studios one could derive form this formidable edifice and grounds, THAT is the obligation of the Key West officials. NOT making destructive choices for this beautiful island with such a coveted location, but ENHANCING what is already there with respect and historical value!
Harris School should be reunited with its artistic, creative, American populations , originally, from all over the world.
This seaport welcomed everyone and should now be the southernmost beacon for its beauty, strength and love of life.
THAT is what retirement people want.
THAT is what the youth want.
I know. We are in the midst of house- searching because of this unique island.
And no Zika, no terrorist, no crooked American politician will destroy it as long as we keep vigilant and protect it.
I , too, was in Key West , in the eighties, and what I saw was a town filled with sadness . ( AIDS)
We all learned and many survived. Let's make sure this city gets the best inhabitants , who were originally the main characters with courage from the seas and creativity from the lands.
Some were rich like Flagler; and some were the very soul that seems to have faded due to unsavory politics.
Whatever is still hanging on that is even slightly significant, and reminiscent of the past, we must hold on tightly to it.
Once it is gone, it is gone and HARC should understand this more than anybody.
See you on Duval.
( and get elected!)

Key West is one of my favorite places to travel to. It's a gorgeous get away that you do not need a passport to get to. I hope to visit again sometime soon.

I am not running for office. I have no filters. I am surprised I've held down my job for nearly 12 years.
However Key West needs leaders to give it a direction other than that offered by developers. Truman Waterftont will be the proof.