Several things recently have caused me to ponder the meaning or climate change. The new President declares its a Chinese invented hoax to fool people while his daughter seems to think it's real and wants to mitigate it. Then there was the recent Breitbart story shot down in flames by the weather channel arguing whether or not the planet is warming (it is). And then there is my own life like this photo during the last full moon cycle. I took the picture the morning after the full moon and the dark patch shows where the ocean rode up onto our street. No harm done- yet. 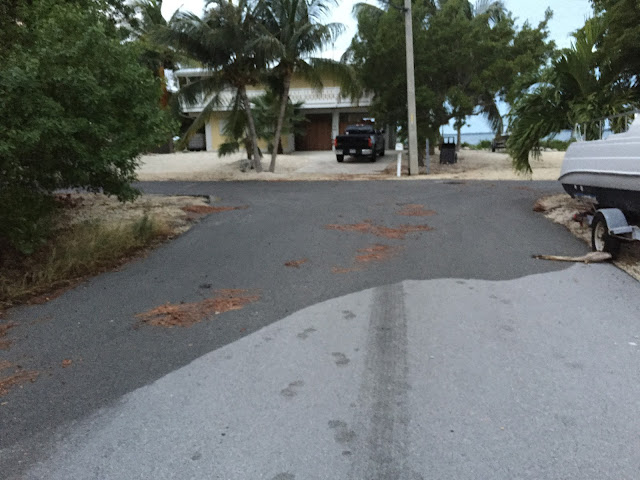 For me climate change is somewhat academic as I am 59 and will likely be dead in twenty years, and because I have no children there is no compelling personal motivation to worry about what happens after I'm dead. And there is too the loud, deafening body of people who argue climate change isn't real so there. It's that last group of people that make me want to distance myself from the climate change debate. 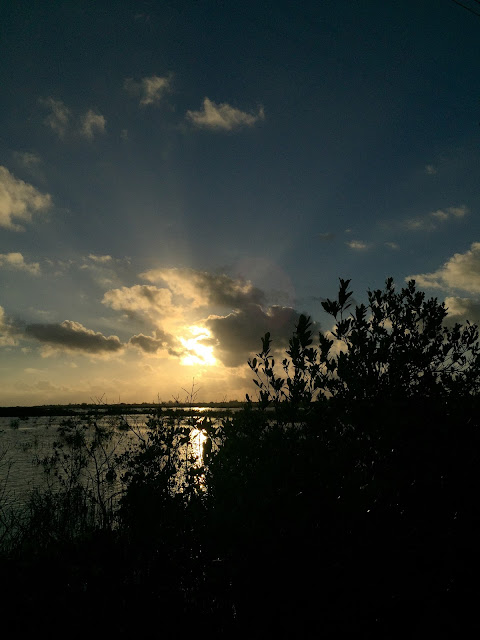 Change doesn't come easily and to make real changes in the arc of climate change it seems to me significant changes will have to be made. So I can see why others in my position might not want to worry about what comes next. What baffles me is the army of deniers who have children and grandchildren. Even if they aren't convinced by the science you'd think an issue this critical would force everyone to take a good hard look at the future. 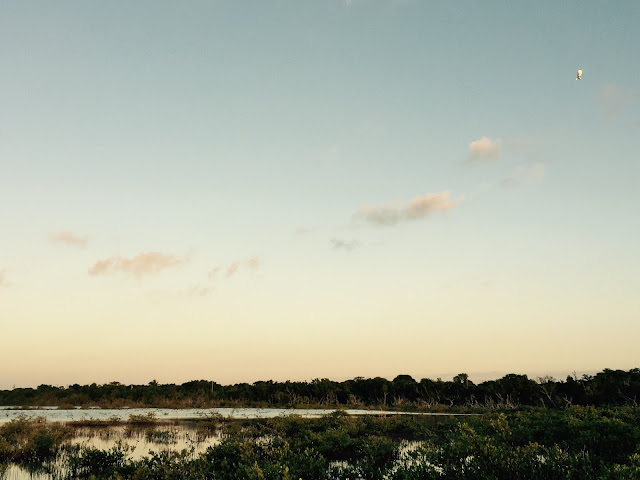 I live in a watery place close to the surface of the sea. So if the polar ice caps  melt producing three feet of rise, then pretty much everything you see here will drown. If that is even a possibility I'd expect you to start worrying about it and look for change from our leaders especially if you have offspring. And if you want to argue against prevailing science that Climate Change is a mere conspiracy I'd still make the argument that on the off chance it is real and you have grandchildren for their sake you'd want to mitigate it by changing how we live. No such luck, we are marching like lemmings into a dystopian future. 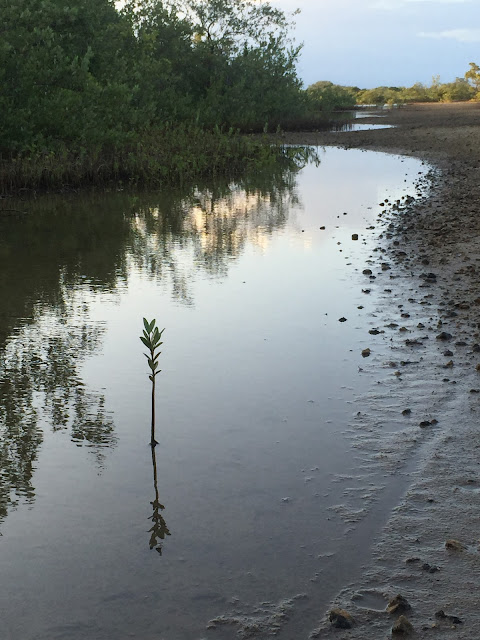 I have wondered idly in the past how climate change would make itself known and nowadays I think I am getting some small idea. I see signs of flooding every month everywhere in the Keys not that there hasn't always been flooding to some degree. But now Monroe County is planning how to spend millions to raise two roads in the county that flood with ever greater frequency. Draughts are everywhere as rainfall and more importantly snowfall levels are down. Storms are stronger and more unpredictable and seasons  are doing odd things. I read of primroses blooming where snow should cover the ground. 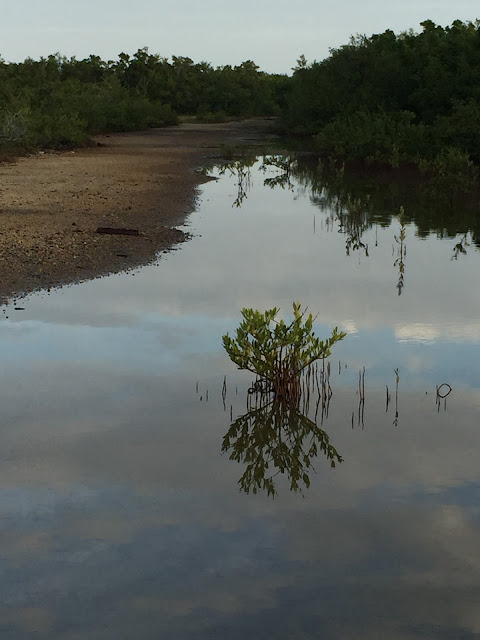 I would be sorry to see the Keys go underwater if I were even still around at such an advanced date. But most likely all I am going to see is increased occasions when floods drive up onto dry land, when we will need to check the tide book to plan our walks, Rusty and I. 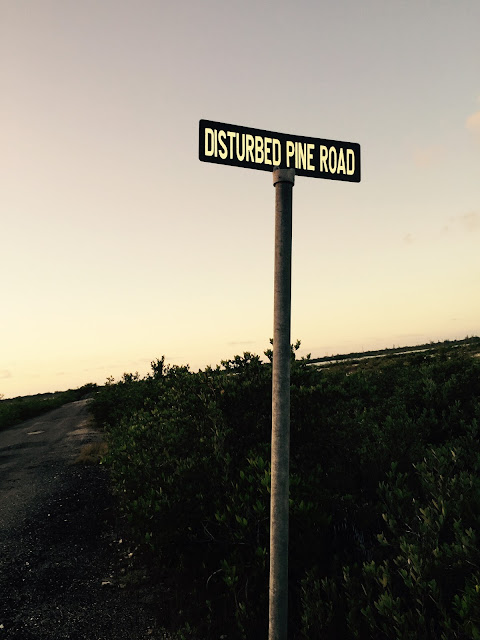 What happens as things continue to change is anyone's guess but I expect at first, like now, we make minor adaptations and forget how things used to be. And then one day everything changes and the waters stop going backwards and keeping coming on. 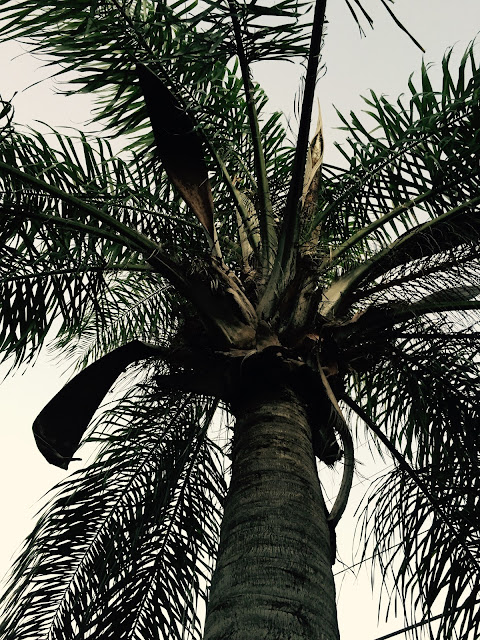 Like this private road evidently flooding to frequently these days. So a few loads of gravel raised the driving surface a few inches higher. I guess we will see more and more of these band aids in the same way Monroe County is working to prevent flooding on two streets in their jurisdiction. They are trying to figure the best way to raise the roadbed in two places to allow traffic to pass even at high tide. 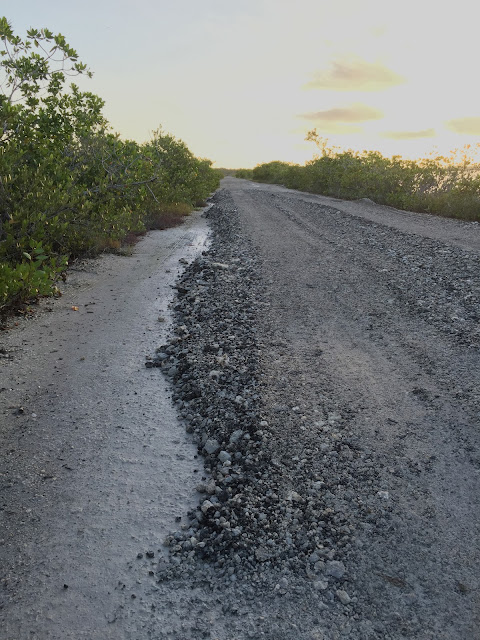 We may become displaced people sooner (or later ) than we think and Florida may yield to climate change faster than planned. Already seawater is penetrating the main South Florida aquifer as the fresh water is sucked out in greater and greater quantities. Engineers are trying to figure how to keep the saltwater out so we can continue to live here. 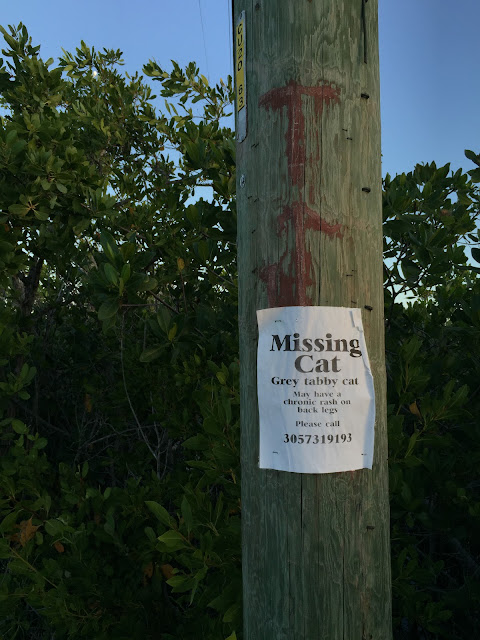 The thing that bothers me most about climate change is that it has become a political football. Opponents argue mitigation will impact the economy and that statement is so short sighted I cannot believe people still make it, but they do. Obviously industries will have to change, indeed they are changing and that drive to create a sustainable first world economy with renewable energy could be extremely lucrative for everyone in this country. Yet we are told a renewable energy economy will ruin the US. Change is frightening. 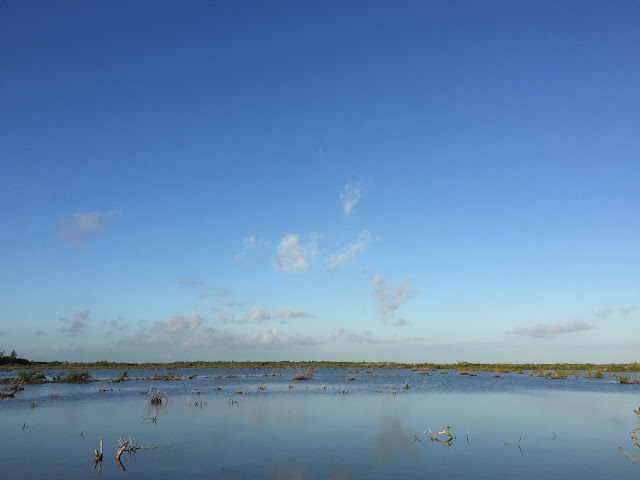 I wish we could have sensible conversations in this country. I wish we could make plans and believe in ourselves and know we will come out on top. Start there and good changes will follow no matter how crappy the climate gets.
Posted by Conchscooter at 12:00 AM

Change is inevitable. Man wound never have risen to where he is without adapting to environment.

Anyone with half a brain realizes climate change is real - look at historical changes, Ice Age, etc
But the real question is how much does current human activity impact that change and how can we minimize that in future .
WE obviously need to reduce our emissions, use solar, wind ,etc more and reduce our use of carbon emitting fuels.
One major volcanic eruption will cause more impact than man does in a 100 years. !!!
So, My viewpoint is we need to more forward reducing carbon footprint but our actions need to be weighed by costs of doing so,

The Keys were formed by huge drops in water levels, they used to be submerged. I fully expect they will soon be submerged again. Lots of people including from Miami will need to move to higher ground, of which there will always be plenty to go around. All this within the next hundred years, a millicecond in the Earth's (and man's) history. We will continue to burn cheap fossile fuels because they're available until they're not. We'll be selling our home in Big Pine in the next ten or so years, before The Tipping Point, when the masses will realize what is going to be, real estate prices will plummet, and move onto our boat in a marina in Key West. Boats are great for rising water levels.

I often wondered why people with kids and grandkids don't seem to worry more about climate change and the environment and how many of them don't even recycle.

With no kids either, if the world goes to hell in another 40 years, it won't make a difference to us, but at the same time what will we see come to pass in that 40 years?

Well said Michael. It's important to speak up like this. If enough people do, it might help reduce the ranks of deniers.

Yup our general plan is about 10 years here, sadly. Some denier will buy our place. We'll go south where there the islands have houses in the hills.

I'm pretty sure it's too late to do anything at this point that will stop the sea from rising in our post lifetime. Doesn't mean you can't stop it from getting even worse, though my guess is that won't happen, either.