A Tale Of Two Dogs

I find dog ownership in this country to be rather peculiar.There is a widespread belief that dogs are as angry and unpredictable as their owners. Frequently when people snap at me asking if my dog is friendly the answer that comes pat is "much more friendly than you."  My neighbor marvels how Rusty has the run of the house and unfenced yard and is happy to sit in the driveway bothering no one and simply watching the world go by. Of course he is, he gets great walks and lots of attention and he knows not to piss me off. He is my companion, not an ornament or a status symbol. He doesn't like to see me annoyed so he behaves. We have a deal. 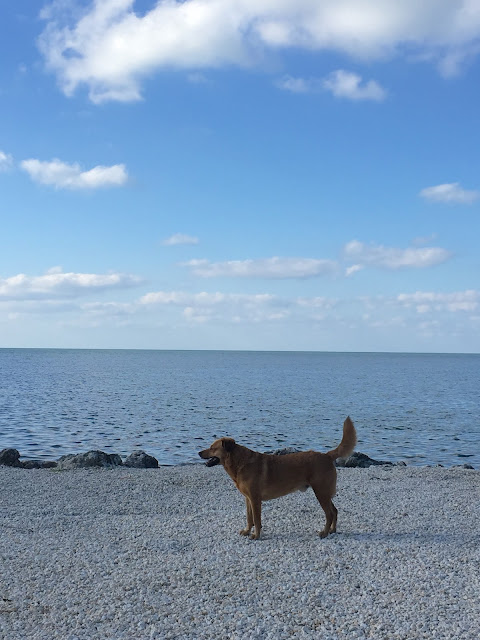 He's a smart dog so it didn't take much to train him, but I don't hit him or yell at him, I just give him the cold treatment and he hates that. I use unconventional sounds to obey me. I say "stay" instead of sit so he only knows to obey me. If I want him to stop I clear my throat and he sits down just like that. As he lived on the streets for a long time he is very well versed with traffic and pays attention to passing cars and stays out of their way. I clear my throat and he sits and waits. 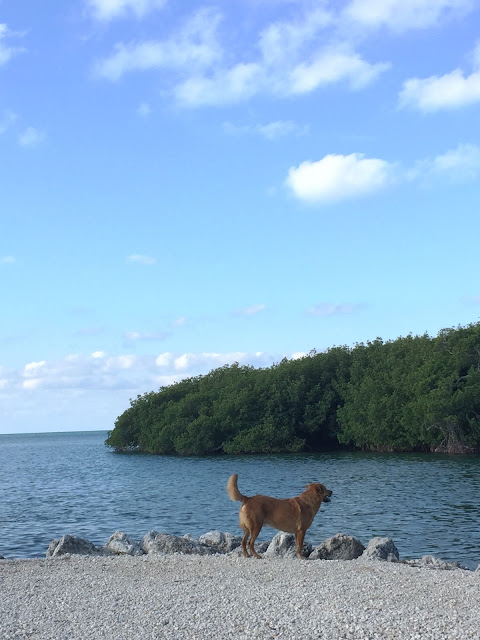 Out walking I saw a distant figure with a dog tightly restrained barely visible. No sooner than they saw Rusty sitting waiting they turned tail and walked rapidly back out of sight, so far away they were barely stick figures. I can't imagine living with a dog that can't cross paths with another dog. I see them all the time struggling with leashes and and dogs that can't run free and be dogs. It seems a rough deal for dog and owner. 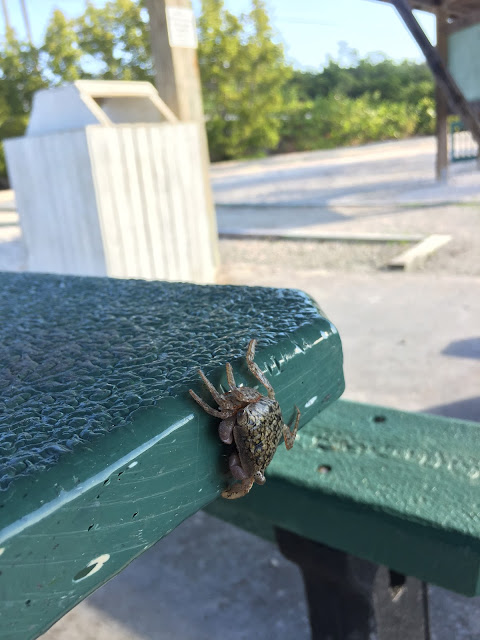 Later that morning I wanted to sit by the ocean for a few minutes so I stopped with Ruty at a little waterfront pocket park. A man roughly my age, sun tanned skin with bleached blonde hair looking like  a surfer dude or a laid back long time Keys resident. He had a snow white dog sharing his space and I mentioned Rusty was friendly, he nodded, the dogs met and went nose-to-nose, no drama nothing needing to be said. It was a very satisfying moment to see the two dogs sizing each other up and enjoying their company. 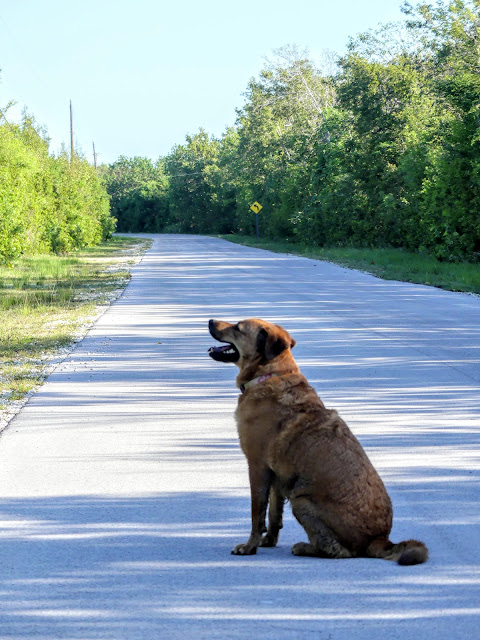 Maybe I extrapolated too much from the two encounters but in some way I felt they typified life in the Keys these days, the uptight incomer who loves the Keys and wants to make them conform to what she knows and the old tramp, millionaire or pauper who cares, who goes with the flow and lets  things sort themselves out as they should. I fear the leash-less shambling lifestyle is being pushed over the edge and away. Rusty and I agree that would be a shame.
Posted by Conchscooter at 12:00 AM

In a couple of years my wife and I will be such newcomers, from Europe via LA. Because yes we did fall in love with the Keys lifestyle and so first we bought a house on Big Pine that we stay at when we can and rent out when we can't. We then decided not to wait for the inevitable tumble in property values once the masses realize what science has already told us, that the Keys will submerge in a surprisingly short time. So we're selling our house and bought a boat slip in a liveaboard marina on Stock Island. Boats don't mind rising water levels, right? Plus we like the less is more' approach to life these days. We love the atmosphere on Stock Island and the proximity to Key West which reminds us of the free-spirited time of our youth in our native Amsterdam. We think we'll blend into the easy-going attitude and I'd hate to think we'd be seen as spoilsports by those we respect and look forward to joining. We'll see. First 6 or 7 more years of working ahead, in Los Angeles where we'll start the liveaboard life in Marina del Rey. For now I'm a couple weeks in Bangui, capital of the Central African Republic enjoying your and Rusty's daily diary like I did the past three weeks from Kabul and before that Beirut. Thanks for those daily contemplations. We don't have a dog but we do have two cats who I hope will adjust to living on a boat ... Maybe I'll start a blog once I have the time.

What is that creature on the park bench?

A small crab I think. It was comatose while I was there.

Have you ever considered training other dogs?