Will it? Won't it? Hurricane Irma is driving past the Virgin Islands, with the eye of the 185 mph storm some 40 miles north of St Thomas. Today it should brush Puerto Rico and Hispaniola then it will threaten the Turks and Caicos and the Bahamas. Because the Bermuda High is strong enough we could see weather coming this way if the major hurricane is forced far enough south, yet now there is a hint in the Hurricane Center forecast to indicate it could well miss Key West.. 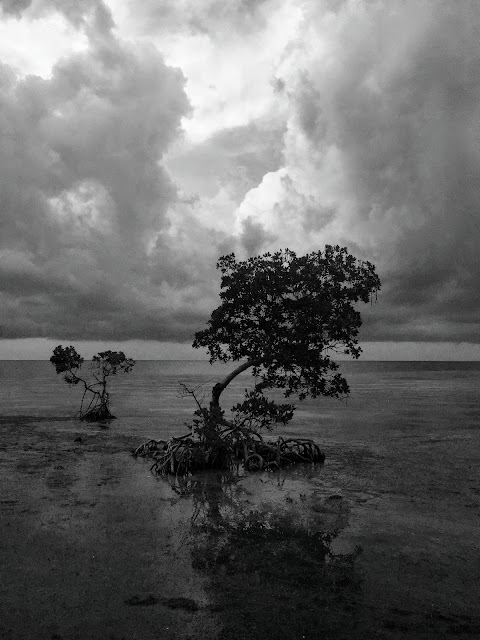 This is described as the largest most powerful storm to form in the relatively cool Atlantic Ocean waters and now it is scheduled to drive up the Old Bahama Channel, shallow and very warm waters which will feed the storm. Indeed it may drop to 140 miles per hour by the weekend but that will still make it a devastating Category Four storm. Right now, Wednesday morning it is a monstrous Category Five, as high as the scale goes. But the five day track shows the Upper Keys as the landfall, possibly  a hundred miles east of Key West. 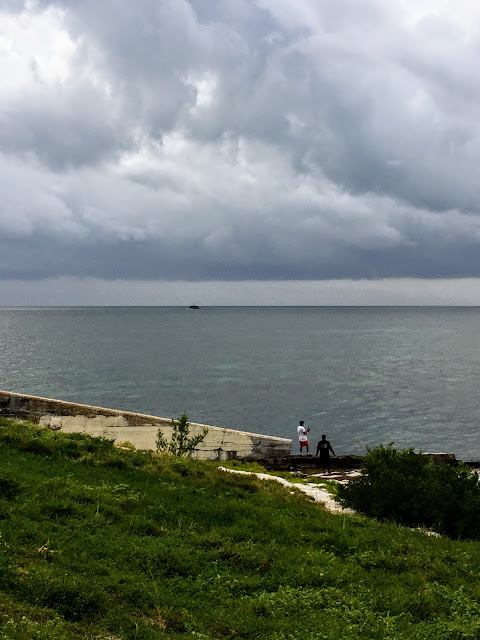 It's been so long since a hurricane threatened and Florida has such a high population turn over there are many many people who have no idea what happens. And yet I have seen an encouraging number of people leaving and driving in good order up the Keys to escape. News that Irma is a category five with 185 mph winds has awoken many people to he idea that this storm is truly dangerous. 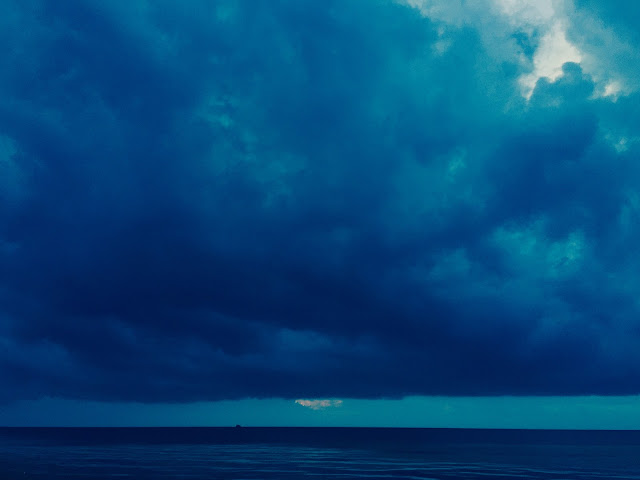 My own response is to ignore the danger and just keep working at the daily tasks. Buttoning up the house is a step by step process with help from neighbors who themselves are all talking about leaving before Friday when the winds are expected to blow. Me? I am one of four dispatchers who will be working through the storm along with a few police officers who will keep the lights on at the police station. I appreciate the fact this is a deadly storm but the police station is designed to weather these conditions especially now that we might avoid a direct hit... and I expect we may end up a bit uncomfortable but   I doubt my life will be at risk. I shall post whatever I can here and at my Instagram and Facebook pages both under the name of Michael Conchscooter. If you want to watch this epic story fizzle one picture at a time. 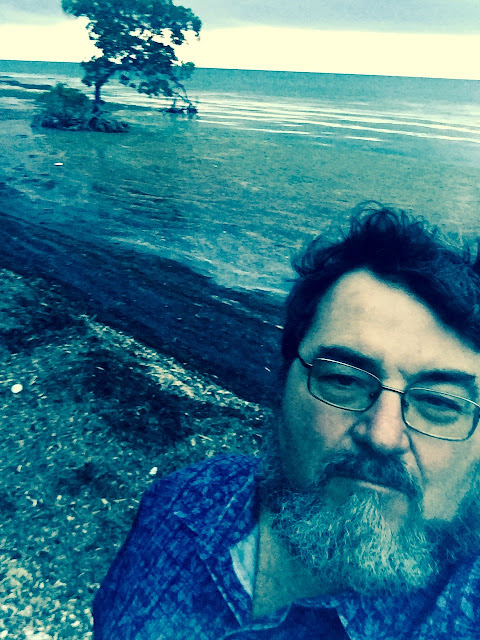 So for now I go outdoors and look at the ocean and the check the Hurricane Center website obsessively and keep calculating the odds of not having to change my routines at all. Its very dreary and as  each day passes it seemed more obvious that Key West was in the cross hairs. I kept  hoping the  trough in the continental United States might suck the storm away from us and maybe it has. As for my family while you read this my wife has left in her Fiat 500 with a tank full of gas and a dog on the back seat. Someone asked my wife on Facebook if she was taking Rusty. Hurricanes produce all sorts of strange questions. I have no idea why anyone might imagine Rusty would not be taken care of. So I shall be alone until I report for work Thursday night and won't leave the police station until the all clear is sounded next week. 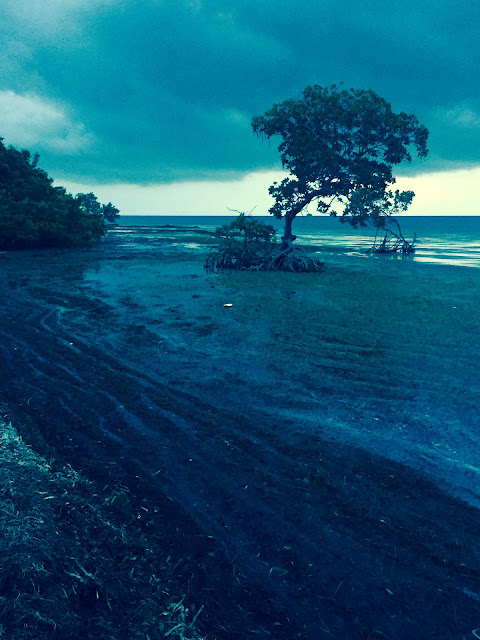 The 911 lines tend to go quiet as people are busy preparing but the administrative lines light up. At Key West PD we answer both lines at the same desks, which can confuse callers when they dial 911 and ask for the police. "I am the police," I say and they don't believe me. I've already starting taking questions about the weather like I'm a forecaster or a prophet. I just read the weather off my phone like they should. Then they have questions about buses, where to get gas, shelters and so on. Hapily the emergency operations center for Monroe County has opened to answer these questions. We just take calls from people who need help, we have no particular information to share. When the storm gets close and they order us in and shut the doors time stands still. Whatever is outside is beyond reach and the world becomes an internet screen and a whirling mass of clouds slowly getting closer. 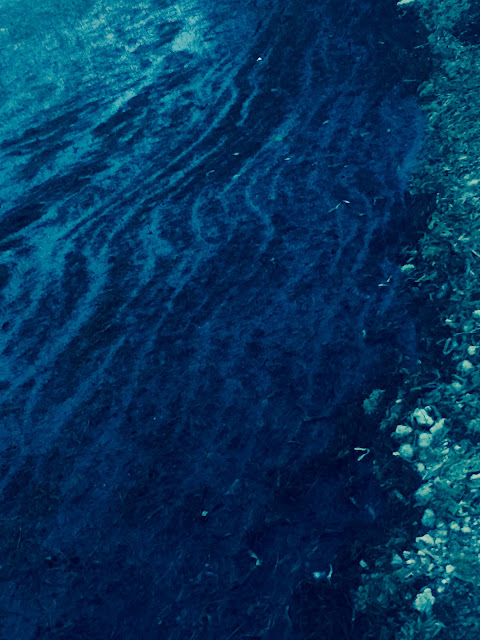 It's been years since we've had to do this and I don't want to sleep on a  cot or shower like I was back in boarding school drying my hair as I walk past armed police and piles of sandwiches and the sounds of weather forecasters in the corridors. I'm not ready to wreck my routines to suit the convenience of a spinner called Irma. But it has come to that. Oh well.
Posted by Conchscooter at 12:00 AM

My colleagues who are evacuating think I am being v ery unsafe staying behind. We shall see.

Thoughts are with you and all the conchs. Thanks for doing your job in such a situation. Safe travels to the Mrs and Rusty.

Batten down the hatches and be safe. Thanks for staying to weather whatever comes your way to take the emergency calls oF KW. It's a tough job, but somebody's got to do it. You're in our thoughts. Keep us posted.

be safe... reieved to hear that your wife and rusty have left...will be watching for updates.. .

Michael if anyone can weather a category 5 hurricane's direct hit with sang froid and aplomb, that person is you.

Stay safe both you and your wife. And Rusty too.

I have every intention of drowning like a gentlemen should that become inevitable. Until then I shall ride around enjoying empty streets and blue skies until 7pm Thursday when the lock down begins.