"I don't think you're going to like this," Nick said as he struggled to pull my bulky new mobility walker from the back seat of his diminutive Subaru  sort-of-a-sports-car. It was that time once again where we were going out to lunch last Thursday and Nick had tentatively half suggested an eatery in Overseas Market near Winn Dixie and more importantly a large gym. Little does Nick know I am as crunchy as the next former resident of Santa Cruz, California; I have a past. 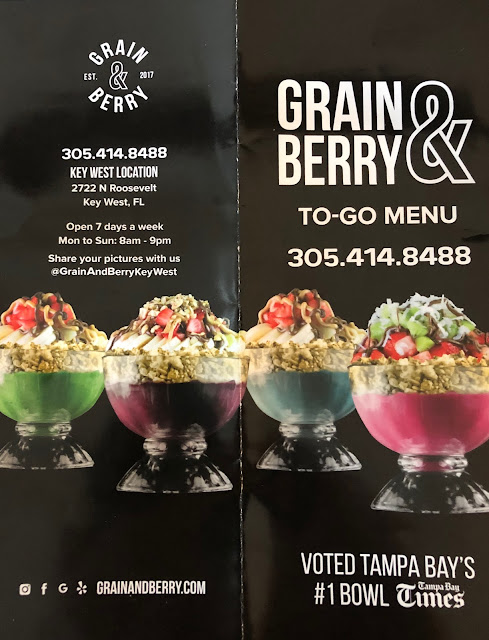 The  first thing the food adventurer will notice on entry is the vast array of bananas, and I only managed to get a very few of them in the viewfinder.  Naturally when we went to order I had to ask if they were fresh out of bananas and they took it well.  Nick has a passion for eating in places where you have to build your own dish. The last time we did this was at Sinz, a burrito place that did not strike me as worth it. Now that familiar sense of panic started to rise in my gorge as I saw the wall covered in options and choices that I had to select. I am a man and I asserted myself of course; my fall back position in these encounters is to seek out the daily specials and they always have them. If they don't sound too gruesome grab a special and save yourself the agony of mixing and matching with people in line behind you growing impatient. 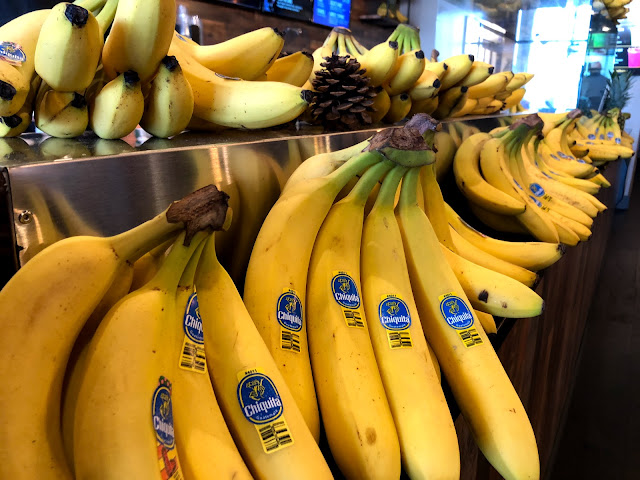 Each one of those boxes represents a choice, a smoothie covered in granola or warm oatmeal (which I love) covered with fruit or berries and a squirt of peanut butter or Nutella or some other thing.  I went for acai smoothie with apple and blueberries and peanut butter, none of which I dislike at all. I figured it was a safe option even though acai is one of those modern jungle herbs we never see in real life but cures all ills in the younger generation. It just tasted like blackberry to me and was a deep purple. This lot pride themselves on not adding sugar or corn syrup or other nasties so you can order with a clear conscience. I did panic on the drink order and went with Nick's dreary suggestion of a bottle of water. I should have gone for hot tea for the full effect, if they even offer it which you'd think they would as tea is good for you. Plus I would have got to see if they know how to brew something remotely resembling a cuppa; probably not, so I was most likely spared by my indecision. 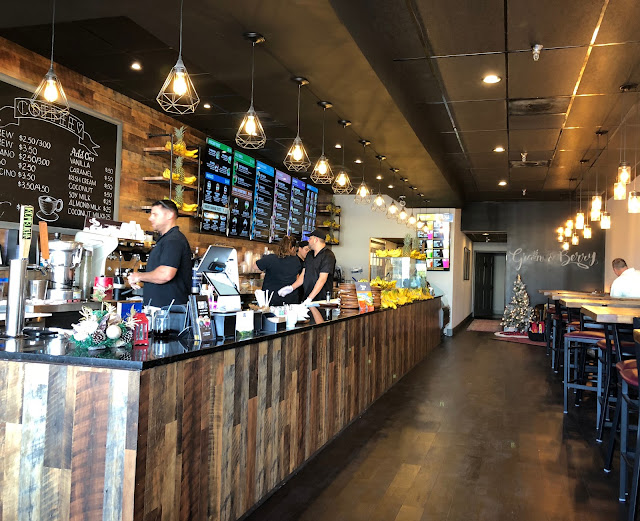 On the way over Nick had mentioned something really foul which members of his millennial generation apparently swoon over. It's called avocado toast which is supposed to be exactly what it sounds like. It reminds me of the slightly bizarre flavors my Scottish sister likes to dream up, most memorably a lettuce and Marmite sandwich that even though I like both ingredients has remained lodged in my memory bank for these past 30 years. After we had ordered fruit bowls and sat down I mentioned this avocado delight to Nick and he promptly got up and went back and ordered it for us to share. I suggested the egg and avocado and to my delight it came back with scrambled eggs spread thick and creamy on top. Yes I know it sounds hideous but I can't stop thinking about it. The sandwich, if that is what it was, is delicious and a drizzle of hot sauce would not have gone amiss. Next time I bring Green Dragon with me. 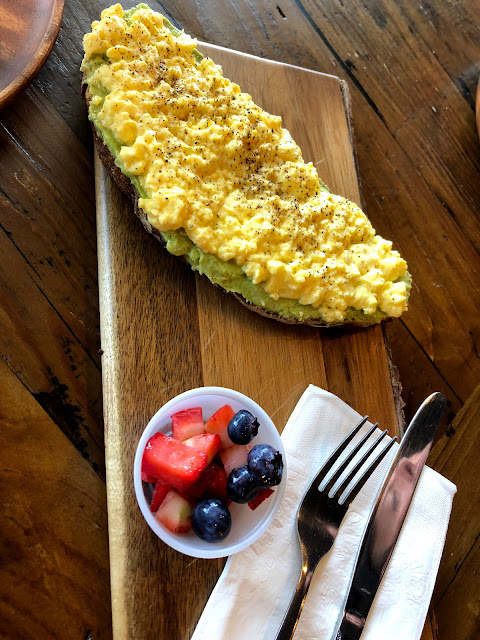 We piled into that like two starving men and in between bites we got to sample a parade of the most exquisite women you have seen in Key West trotting in and out of the gym or stopping by for a refreshing cup of something smooth. They were of all ages and all shapes and various stages of improper street dress. A small reminder why not everyone wants to do Broga for men I suppose. I got on with demolishing my....whatever it is. They call it a bowl which puts me in mind of an opium den, not that I've ever visited one you understand but they crop up in Literature from time to time where men (usually) lie back and "smoke a bowl." I inhaled my bowl. It was delicious. 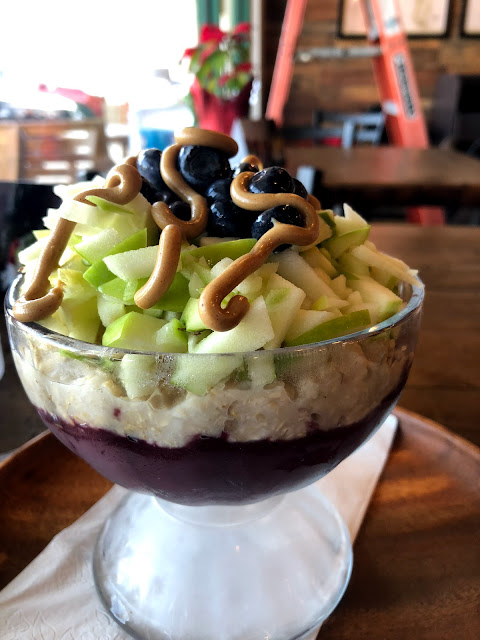 Nick was pretty smug at the point where he realized I wasn't blowing smoke when I said I liked the place. "Let's come back" I said. "Oh" he replied,"so you really do like it?"  Duh. What's not to like? Next time though we explore the hot drinks. If you don't live in Florida you are out of luck but they are in the Tampa Bay area and Orlando as well as Key West. This is another reason to live in the Sunshine State. 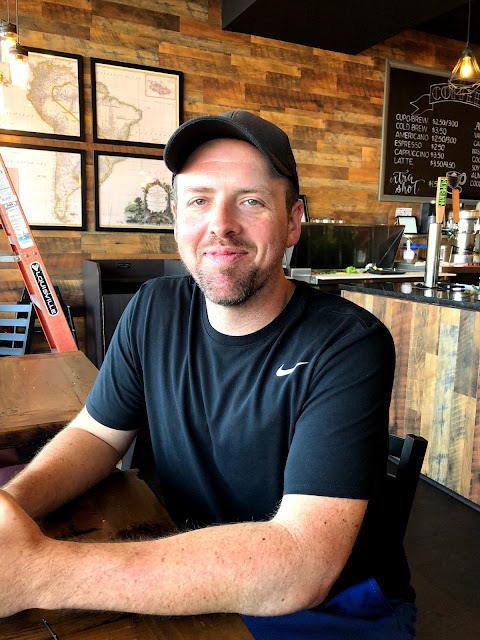 Now that I am driving I have returned my electric mobility scooter which was a great thing. This piece of gloriousness (below) is my new walker. I figured that at last I am stable enough, especially if I am learning to walk with a cane, to have a walker with four wheels. I think it cost around $55 from Amazon and it comes with brakes on the two rear wheels while the front 6 inch wheels turn. There's a bag under the seat which holds lots of things, but if you do fill it then you can't fold the chair properly to stuff it in your car...how do I know? Because I once got a bit too enthusiastic in the cargo department. It's really really nice to have a seat wherever you go when your legs are very weak but I have a feeling this little piece of walking delight will strengthen my legs in short order, and that's because it rolls so easily it forces me to walk fast to keep up. Exhausting and effective, so much so I occasionally tap the brakes just to slow it down a bit. It also rolls silently unlike my previous sliding walker. 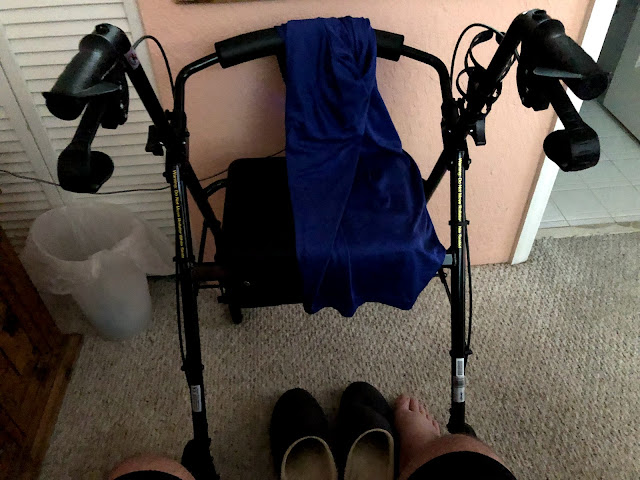 I added a cup holder, of course as I am American and I have figured out how best to back it into the loo where space is severely restricted.  This is almost as good as getting a new Suzuki scooter. That will come in due course.
Posted by Conchscooter at 12:00 AM

Glad you graduated to the rolling walker. Whoever invented that piece of equipment knew the hassle of using the rubber foot and slide contraption. KWBound.

The walker with wheels and breaks and a seat is a wonderful thing. I purchased one for my mom many years ago and one for myself after my first knee replacement. I hope yours works for you as well as mine did for me. Keep pushing your limits, it is the only way to get better.
Doug

Yep, got one of those for my mother and she went zooming off with it...