Most people in Key West think Goldman's Deli is in the Winn Dixie Plaza and to some extent they are correct as the popular eatery is in the modern shopping center anchored by that very grocery store. The plaza is actually Overseas Market which is what nobody calls it except for police dispatchers, and in our computers we abbreviate it to OSM. So when Steve suggested Goldman's for lunch I noted it in my diary as OSM. I do that a lot. Black becomes "blk" and about becomes "ref" as in police talk "reference" means just that and covers a multitude of situations. After 15 years of sitting in the communications center for night after night the place has left it's mark. So I was meeting Steve at OSM  ref lunch. Or I was Ten-51 OSM  ref Ten-10.  How did I side track myself into ten codes? 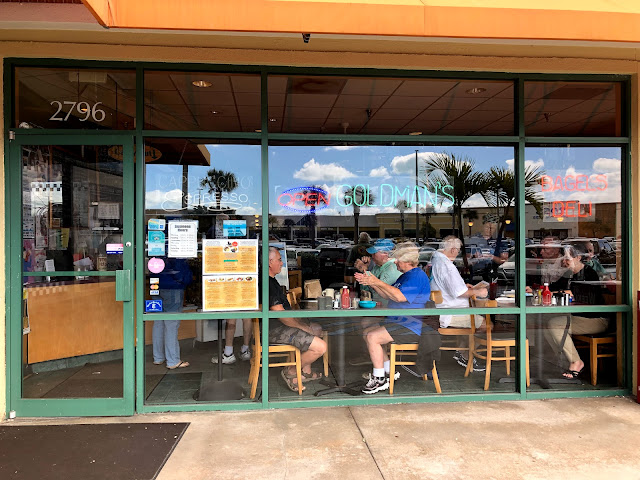 Steve has managed to retire from his position as a university professor in upstate New York with his sense of humor and appreciation for life undiminished. He's one of those people who has grasped Key West as Key West should be grasped, as is without any need to force change on it. He rides a scooter like a demon, he goes back to the Finger Lakes for a few months in summer and  enjoys not dealing with an  average of fifteen feet of snow in a winter. I had to pause and let that sink in for a while. Fifteen feet is a lot of snow. You can see why Key West appeals to him, or at least I can. 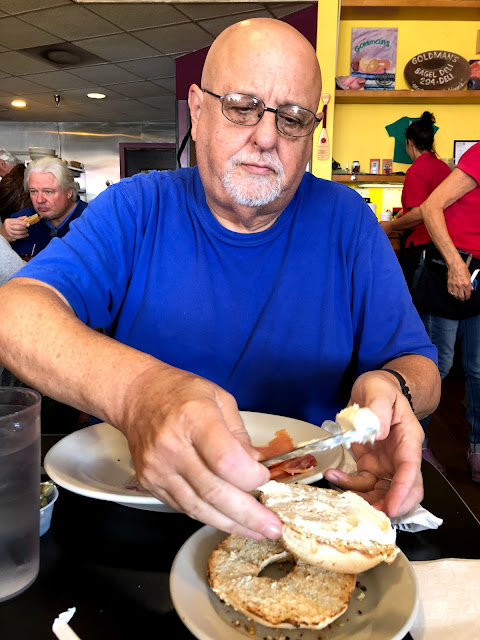 We meet in the gym during Dean's Aging Boldly exercise class which he has been  attending for two years. So I suggested, as you do, lunch for two men only, wives stay home. Women do this stuff all the time and they are so smart I decided to try my own hand at it. Robert has buggered off to Utah to watch his wife ski, which sounds like watching paint dry only it's freezing cold. And he told me. I swear I'm not making this up that it's a dry cold. I looked at him like he'd lost his marbles. Steve doesn't make up excuses for the cold he likes to be in Key West and ride his scooter. 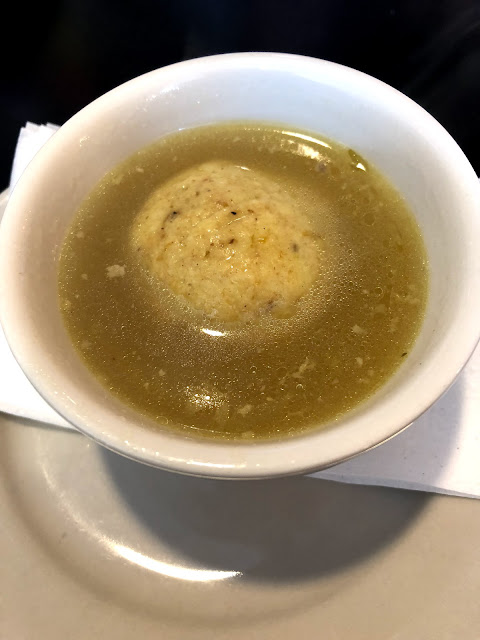 I had matzoh ball soup to start and pastrami  to follow. Steve likes Goldman for the bagel and lox but I am no great fan of raw fish or smoked fish that looks raw so I ate my protein well  cooked thank you. The food was fine but the diner ambiance is loud and the tables are close together which led to the unthinkable happening. Our neighbors butted in to our conversation  which was about mildly political issues between two friends without any great passion, just a discussion about immigration and how to sort out an intractable mess. 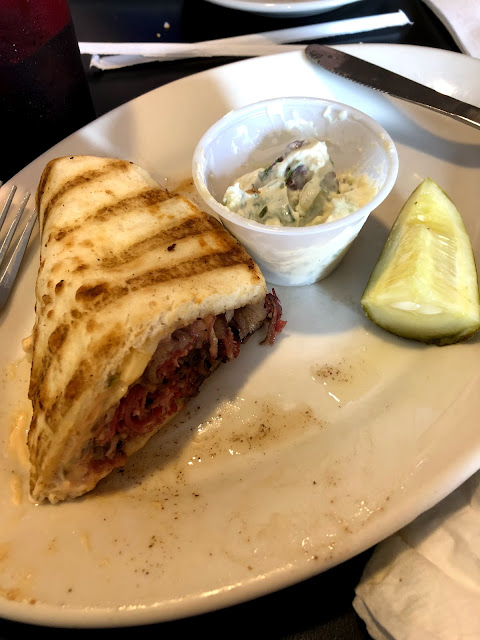 The dude who butted in was a Trumpist who was thoroughly unpleasant by suggesting that political discussions could be carried out in a  thoughtful spirit of give and take  then as as soon as I disagreed with him on a point he sneered at me and called me a flat earth conspiracy nutter. Then he wouldn't shut up and go back to inflicting his opinions on someone who cared. Mercifully his phone rang after a long ten minutes of being lectured by him and he left the restaurant to answer it. The young woman lunching with him who I hope was his daughter tried to apologize for him by being conciliatory and very nice but I really don't see how a man pulling that kind of stunt can be excused. You'd have been proud of me though, I wasn't rude to him, nor did I get emotionally involved in his fear of Honduran peasants marching to take this country over. It was a scenario so ludicrous as he presented it, I could hardly credit him with believing in such propaganda or losing sleep over it. But he lives in holy terror of illiterate Central Americans swamping the US. And he talked down to me as though it never entered his head I speak Spanish and have traveled extensively in those lands. I rose above it all. Given the latest in a  string of mass murders in this country was by another young white male I'd have thought he'd have other fish to fry protecting us from ourselves, but I gave up the rational thought process and paid my bill and fled before he got back from inflicting his irrational terror on some other poor soul at the other end of his telephone. In police codes I'd rate him as Signal 20, behaving irrationally in public. Or just being bloody rude. There isn't a code for that as it's not a crime even though it ought to be. 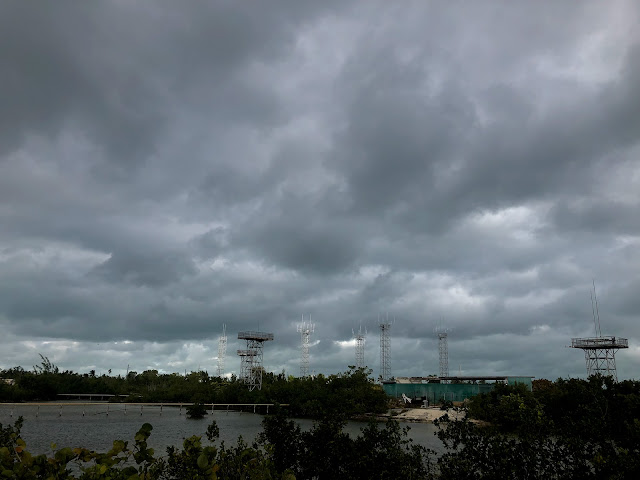 I decided walking the dog was the only answer and Rusty was glad of that choice especially under cool gray skies threatening  only to burst out into nothing more damp than sunshine during the afternoon. 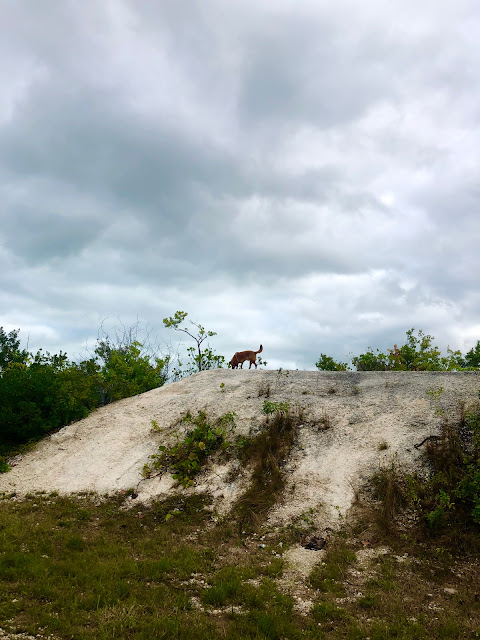 I never did understand why people cheered Trump's very clever slogan "Make America Great Again." I have thought for a very long time and continue to think this country is pretty great and I view it as rather disloyal to suggest it needs to be made great "again." After meeting that poor fearful little man I got a small insight into someone who might actually think that way. Perhaps I am too confident in this country's greatness for my own good? How bizarre.
Posted by Conchscooter at 12:00 AM

It seems to me that some or most of the rude, loud, persistent, irrational Trumpists are trying to convince themselves more than anyone else that they voted the right candidate into office. They keep beating theirselves over the head by imposing their unsolicited, irrational thoughts on the rest of us. Ugh! Unfortunately, you and your lunch companion were one of that guy's targets du jour. :( I hate when that happens. KWBound

Our deep freeze here in Chicago has started. But the sun is out and I am enjoying the birds at the feeders.

Would love to have you, Layne and Rusty visit this summer. Beds are made, dog treats in stock and dog bowls ready to go on special mat in kitchen. The granddogs come often.

Political discussion is usually a fools errand. Most people aren’t very good at articulating political positions or beliefs. I always took the ‘make America great again’ slogan to mean bringing back good paying jobs for the middle class. Nothing more, nothing less. People like to rock the boat. I get off that boat at the first wave, not worth my time.

I would have shoved that pastrami sandwich down his pie hole!