From the archives: This essay I published January 6th 2014. I can hardly believe it is more than five years ago. I am posting it today as we are in St Petersburg once again, checking out the Dali Museum and testing my capacity for long car rides once more. However this trip we did not dilly dally in the middle of the state and checking these pictures I am saddened to say the Clewiston Inn is no more. The building exists but no more hotel or dining room. So despite the fact the meal was not stellar it was in some manner historic. 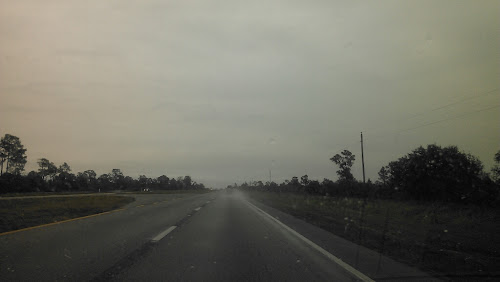 Our lunch destination was 70 miles away in the sugar town of Clewiston which is mostly tractor dealers, seed stores and funky little store fronts. The economy around here is driven by sugar, a massively subsidized uneconomic industry that pollutes and charges you five tax cents per candy bar you eat. US Sugar is the decent face of the industry treating it's imported Jamaican workers honestly, while the Fanjul family has made a fortune treating its employees like slaves and sucking up tax dollars like an alcoholic with a vodka bottle. This is the book that exposed them: Big Sugar: Seasons in the Canefields of Florida by Alec Wilkinson. Ask yourself why we agree to import Jamaicans subsidize production here and pollute the Everglades instead of encouraging Caribbean countries to grow sugar, pay their people and trade with them. U.S. sugar subsidies need to be rolled back - The Washington Post. 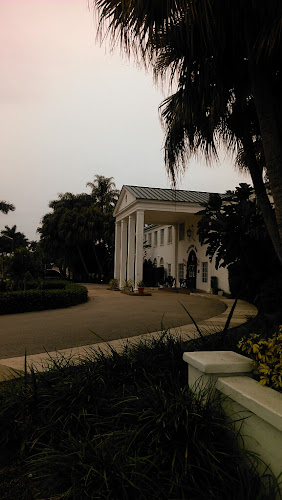 Be that as it may US Sugar (the subsidized good guys) runs the historic Clewiston Inn and it's a cool place for a meal. It may be a great place to sleep but they don't take dogs so we'll never know. I like the side entrance with its long decorated corridor to the lobby. 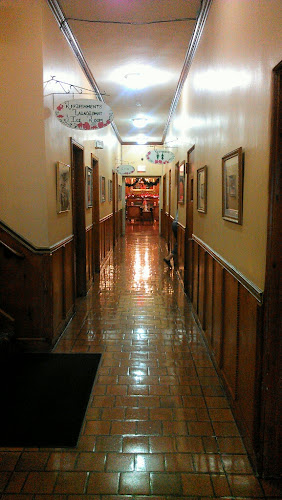 My wife was entranced by this antique reminder of a more leisured class that used to spend winters in South Florida during the 20th century Golden Age. It is doing a different duty apparently in the women's loo as a drip tray. 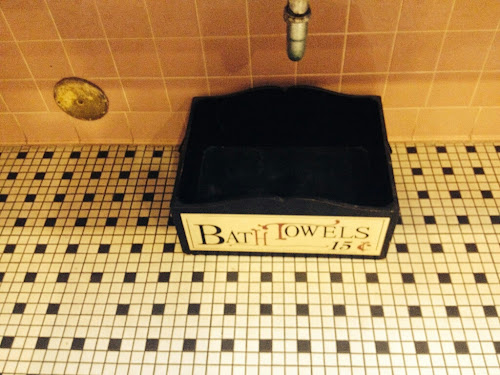 A sign like this, "Cocktail Lounge" encourages me to live out of character and put on a jacket and order a sidecar, or something. I generally like shirts with collars and a gin and tonic or a dark and stormy. I am not Nick Charles. Sorry. 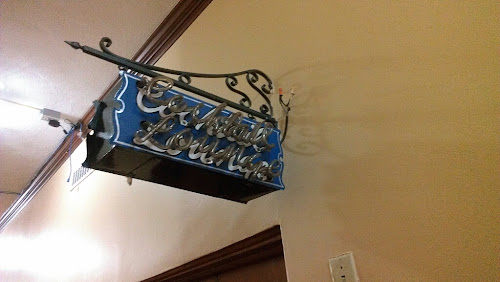 The Epiphany or Twelfth Night was closing in on us when we were there but there was no sign as the decorations were not coming down as tradition demands. My wife loved a singing Santa which serenaded her while she paid the very modest lunch bill: 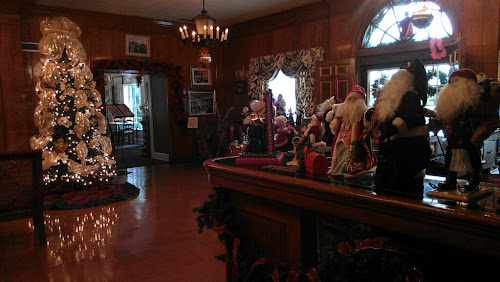 I love the huge over decorated slightly gloomy dining hall. The table linen was not crisp and clean and the week day buffet menu was reduced on a Saturday such that my wife got slightly annoyed. Wot? No mac and cheese or fried okra? In truth offering us only two sides out of three: fries, baked potato or collard greens isn't much of a choice! 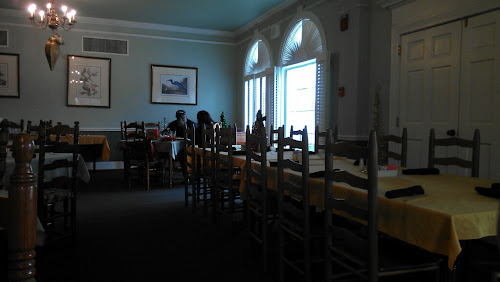 Many years ago I was sitting on a California beach having ridden a Vespa there from New York by way of Guadalajara when a fellow motorcyclist sat next to me to ask about my trip. He told me he had just read a book I would love and handed me a hardback copy of The Big Red Train Ride by Eric Newby and as he promised I loved every page of that quintessential English travel writer's book. As it happens when I landed in Siberia a month later the Soviet authorities confiscated the book, with its provocative big red star on the cover, as I waited to board the Big Red Train myself. In his first travel book, his best in my opinion, A Short Walk in the Hindu Kush Eric Newby mentions staying at the late Pera Palace Hotel in Istanbul:
“We grew fond of the Pera Palace; the beds had big brass knobs on and were really comfortable. Our room seemed the setting for some ludicrous comedy that was just about to begin. Probably it had already been played many times. It was easy to imagine some bearded minister of Abdul Hamid pursuing a fat girl in black stockings and garters round it and hurting himself on the sharp bits of furniture. In the bathroom the bath had the unusual facility of filling itself by way of the waste pipe without recourse to the taps. We watched this process enthralled.”
He writes of the dark gloomy and impenetrably silent hotel dining room with the tottering elderly waiter, and none of that is true of the Clewiston Inn but wishing it were so makes it so in my mind. 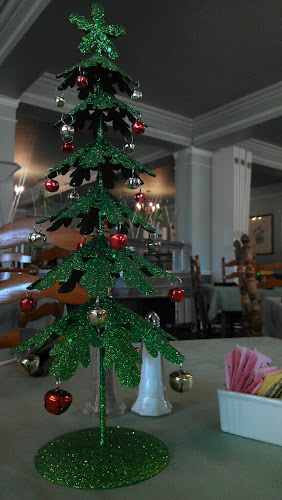 My wife in her disappointment laid down the law and we shared their "world famous" fried chicken. The plate was huge, all ten dollars of it. It was perfectly fried, moist fully cooked crisp and dry on the outside. I was in the Pera Palace of my mind, wishing Eric Newby were still alive and writing. 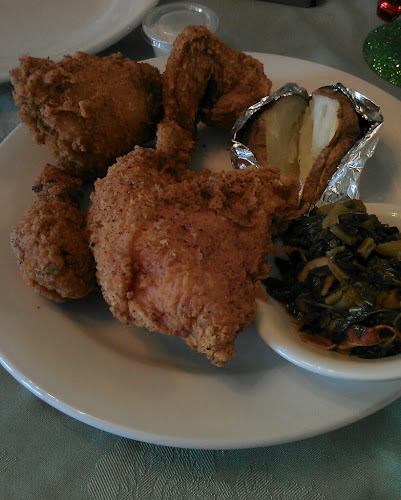 My wife paid the bill -$11.72 including my iced tea and taxes- and I wandered off to admire the past. Sex appeal and barbecue sauce by the bucket. Those were the days weren't they, top rate picnics? Where's Humphrey Bogart, behind the camera perhaps...phew! 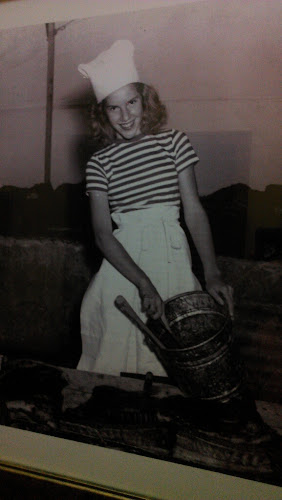 Hacking away at a tennis ball is bad as chasing a golf ball in my opinion but it's how you meet women I guess. Why else would anyone do it? 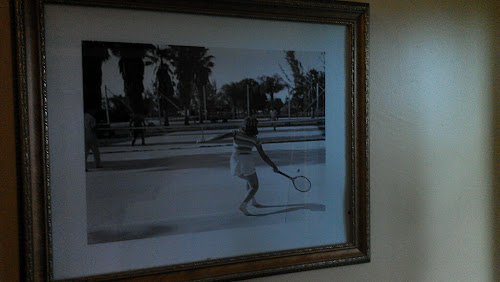 Damn! Here they are still at it. These youngsters were probably just interested in their racquet skills I'm guessing. Their picture probably won't end up on the corridor walls of the Historic Clewiston Inn.

People who live in Clewiston live in endlessly long clean streets, so impossibly long my dog took one look and gave up. Nothing to smell here, move along. 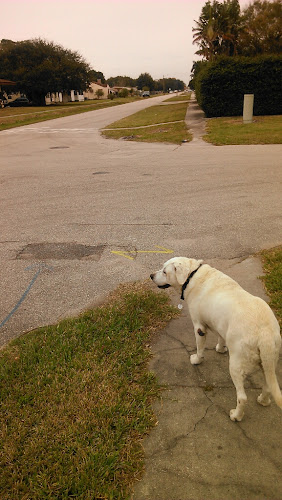 Classic Florida cottage with chimney designed for those cooler mainland winter nights. I see this and I think of this by Marjorie Kinnan Rawlings author Cross Creek, a book about life in a Florida little known.
"When I first came to the Creek, I had for facilities one water faucet in the kitchen, a tin shower adjoining the Kohler shed and an outhouse. For the water faucet in the kitchen I was always grateful, for water pumps at the Creek are all placed in relation to the well and with little or no concern with distance from the house. When Martha lived in the Mackay house she had even no well, but must carry water from the Creek itself. My outside shower was acceptable enough in summer, though it meant going damply over the sand to the house afterward. In cold weather--and you may believe the Chamber of Commerce that we have none, or you may believe me that on occasion bird-baths have been frozen solid--in cold weather the outside shower was a fit device for masochistic monks. The icy spray that attacked the shoulders like splinters of fine glass was in the nature of a cross. I shall not forget the early Christmas afternoon, with six men gathered for dinner, the turkey savory in the oven, the pies cooling, the vegetables ready, the necessity if not the desire for the bath borne in on me, and the temperature at thirty-eight and dropping. I emerged shivering and snarled at the indifferent heavens, "The first time I get my hands on cash money, so help me, I shall have a bathroom." 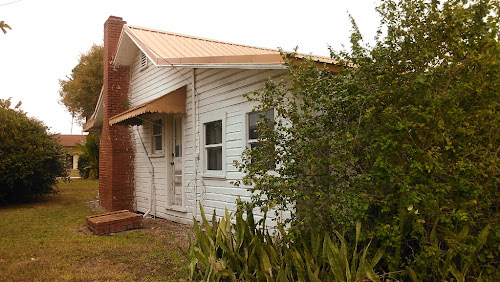 I like to think if I lived here this would be my daily breakfast. 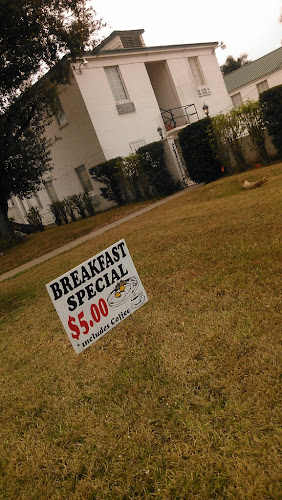 They are touting for business out front on Highway 27, the best way to cross Florida and take side trips. Bikers Welcome. Huh? Is that the Pera Palace way? 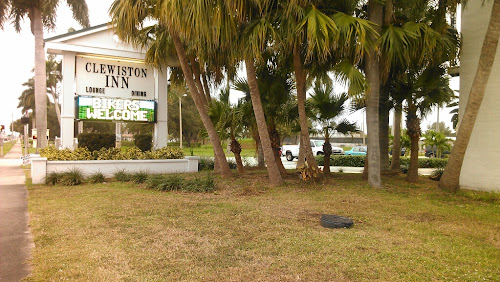 Driving along at 65 miles an hour in the drizzle I saw the orange orchards in the middle of being picked. I took this crappy picture out of the side window, not looking and my phone pulled this off. I edited it by cropping and giving it some vintage effects and from nothing came something. I love pixels. I also love Clyde Butcher's properly taken black and white tripod pictures of South Florida. I am not a complete photography philistine.

Call it organic and my wife is there waving dollar bills. We now have a trunk full of organic Florida tangerines fresh off the tree. Try that in Wisconsin right now. Sorry, that was mean but Florida isn't the stereotype you Northern snot bags say it is either (though some of it is). 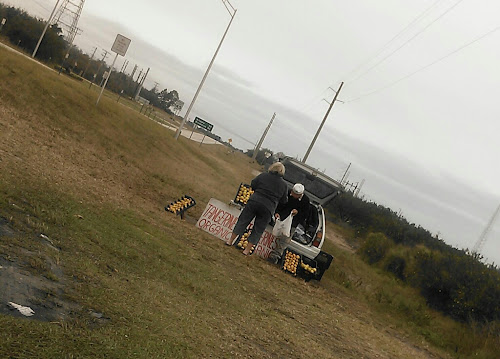 Arcadia has been seen on this page previously but I have lived in Florida a long time and I think of the Ray brothers every time I drive through. Arcadia is no worse than any other small fearful town. No one has been crucified there for instance for being gay, but every time someone tells you some social change is going to ruin the world as you know it think about your own history. Two kids with AIDS get their house burned down? Really? Does that seem a bit old fashioned to you now? Gays in the military, remember that? Legalized pot? Colorado carries on as before but with more tax dollars. Gay marriage anyone? Not in Florida until the Feds override fearful local prejudice. And your grandchildren will wonder why you were fussed. 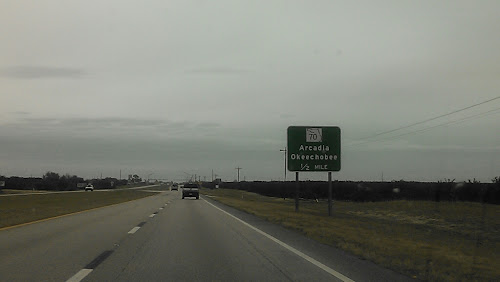 Here's an improvement we could bring to the Keys - alternating passing lanes on a road not wide enough for four lanes and a median. They had these in England when I was a kid but it the middle lane was open all the way, priority to whoever was in it first. Outside Arcadia one direction gets a chance to pass... 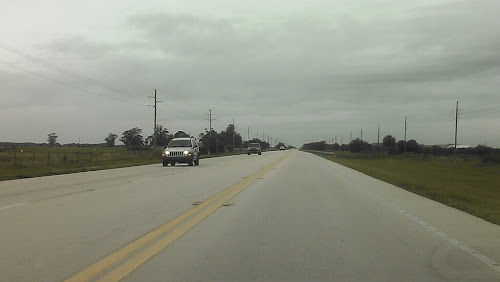 ...then the other direction. It's sensible and relieves back up, and I can think of several sections of the Overseas Highway where this could work. Fat chance in the land of tailgating and texting. 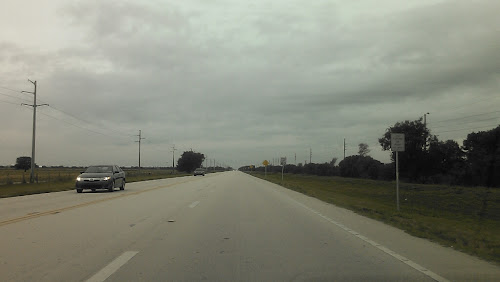 Hey, cows! I am going to have to come back and explore the side roads off Highway 70. I checked out Highway 72 when I went to Sarasota recently Key West Diary: Gratefully Cow Hunting In South Florida, but Highway 70 seemed to offer more of what I was looking for on that trip. 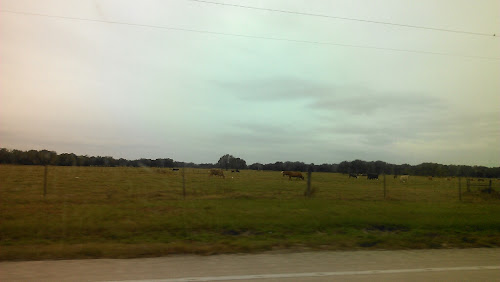 I hope you have enjoyed this side trip away from the Keys. I love back country mainland Florida, a place ignored by the snowbirds racing up and down the coastal interstates. Tough titty for them. You and I know better.

Absolutely love the backroads of Florida. When you get away from the coastline and see the real southern character of Florida. The live oaks with hanging moss. Most tourists only see the ‘beachy ‘ parts. Thanks for double sharing an area I’ve not seen. Michigan.

I actually used to pull off to the side of the road in central Florida just to take in the orange blossom perfume that filled the air. Thought maybe heaven smelled similar.

I worked for US Sugar from 2005 to 2012. When I started they set me in the Clewiston Inn until I found a place. A great company to work for. It seems so strange looking at your pictures. Like it was 30 years ago. I guess it's because it's a world which no longer exists. For me or for them.