I am no great fan of sunrise and sunset pictures as they seem to offer nothing new and others with more dedication and money and tripods and patience will stand in a halo of mosquitoes and no-see-ums to do what I occasionally try to do with a quick stop and much reliance on in camera image stabilization. And then there are the days that are the exception to the rule. Yesterday took me completely by surprise. 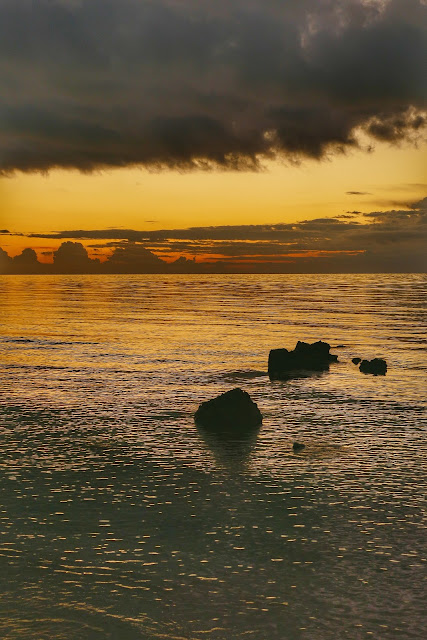 I had posted on Instagram a sunset picture I snapped on Blimp Road while waiting for Layne to bring Rusty to a dusk walk we had planned after our days at work. Standing there with the little camera in hand, an LX100 if you care, I popped a snapshot. It's such a small camera I thought it would be nice and unobtrusive instead its difficult to use such that I am trying to come to terms with it like a bear balancing an egg in his paws, and I got this: 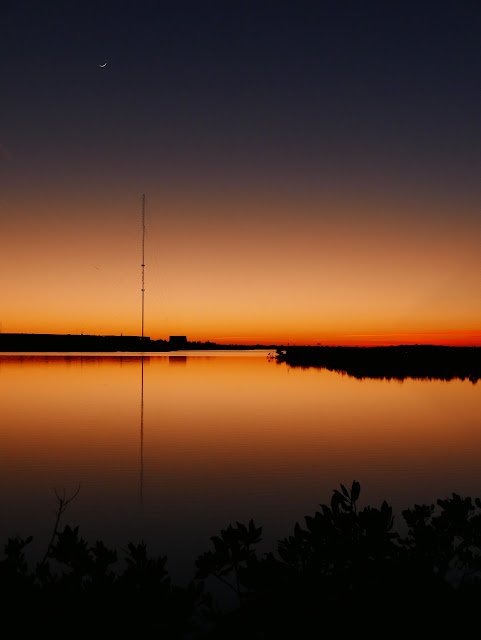 The stillness of the waters among the Cudjoe key mangroves isn't that hard to capture, no filters necessary and the colors are easily reproduced by slowing shutter speed and relying on a tripod or the magnificent Panasonic IBIS -In Body Image Stabilization - and there you are...a crowd pleaser no doubt and puts the lie to my not photographing the sun near the horizon. Which makes my sunrise walk at Boca Chica Beach even more mysterious. I like to stop there on the way to Key West with Rusty on my days off. It is a well known hang out and he enjoys trailing other dogs who were there before him, so we go and he runs and I look around.  The morning promised not much for me, but Rusty was happy so we wandered. 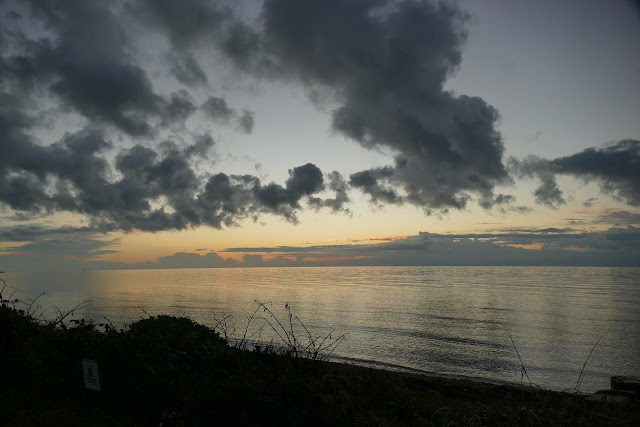 In the world of digital photography serious photographers wander at some great length to find the ideal spot and they measure and pace and observe and peruse. Me? This whole digital thing is free, no more do I worry about film and the cost of developing or the decidedly old fashioned concept of "waste." The camera is durable, I know that after I fell on it two weeks ago and bruised my chest horribly; the batteries are rechargeable and the image sensor is good for the life of the camera. I love pixellated photography, even if modern digital cameras are fearsomely complicated and modern digital photography critics are fond of enlarging everything to exasperation to find all your flaws mercilessly exposed in a picture  they like to expand by  feet to find soft pixels and out of focus strands...Come one, come all: 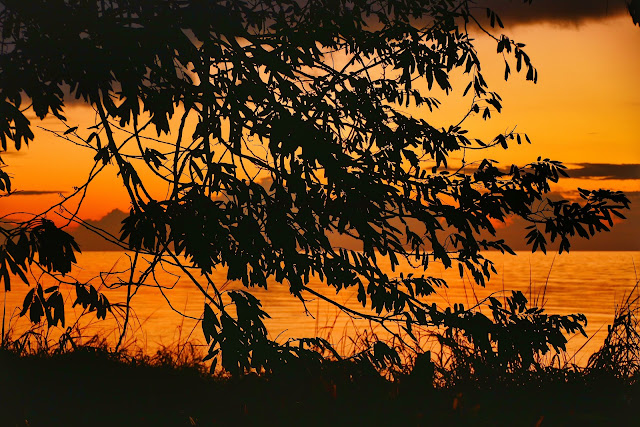 So I just fiddle with the shutter speed and the exposure setting for the camera and what was a pale imitation of a sunrise suddenly is captured in fractions of a second and held in a new shade of color. Up the beach a solitary angler was trying to kill fish while further down in the other direction a late comer, by my standards (!) was ambling her lap dogs on their daily appearance at Boca Chica. To all intents and purposes we were alone, each of us on our piece of beach in the Florida Keys, no cruise ships, no five dollar stores, no street cleaners, no radios, no conversation or footsteps even. 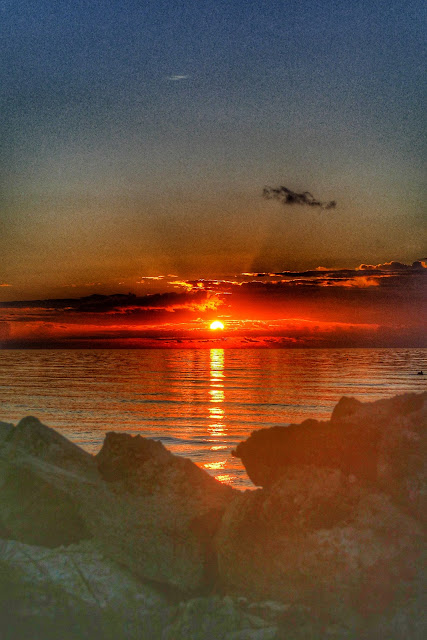 Rusty was having fun so I decided to emulate his very proper attitude and managed to mess up some exposures like the one above, but it didn't matter, I'll have another go in a week or a month, I'm not selling anything or meeting a client's expectations. Easy come, easy go. Here's another failure. The focus is all wrong. 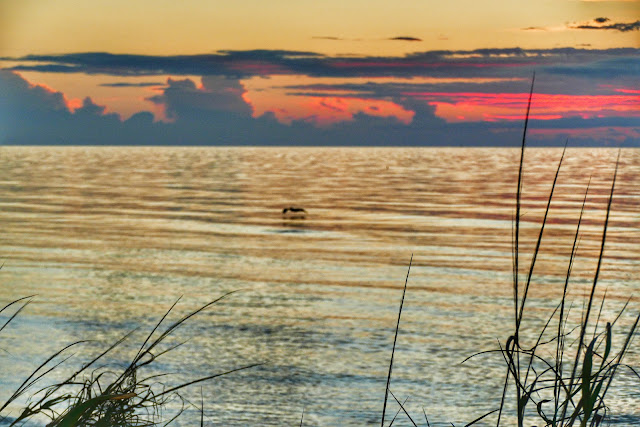 Let's see. There are more Keys Clichés. Here's one: 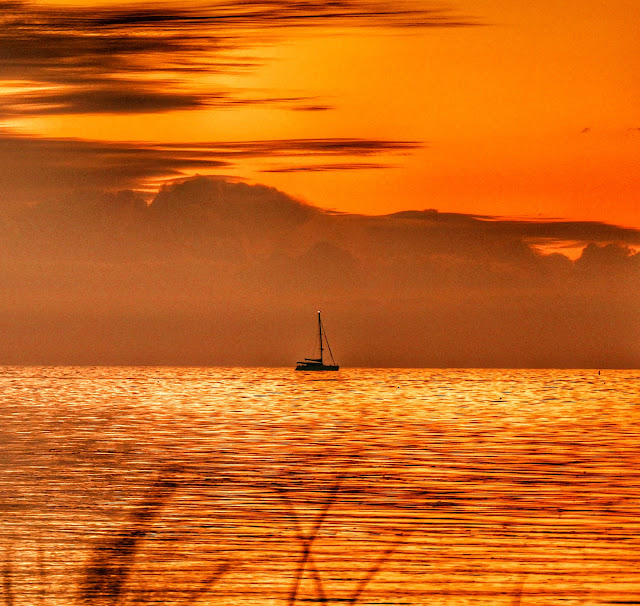 Note the square format. I cropped the other sailboat out as it was closer to the rising sun and messing up the shading of that absurd shade of orange. This sailboat with its anchor light shining at the masthead, per regulations is now centered in the picture which by the Rule of Thirds is not correct. To increase interest we stick the object of the photo off to one side, except sometimes rules are meant to be broken. I also cropped the picture as mentioned and some photographers abhor cropping. You crop in camera they say, meaning the composition remains as you frame it in the viewfinder. However I am a sharpshooter and sometimes the contents of the frame gets away from me and some stray element needs to be removed.So I crop as I like and as the pixels will support. 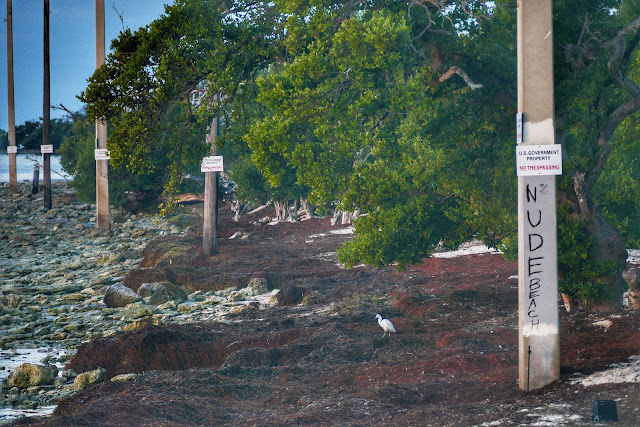 I had heard that the distant beach portion has been closed, that place where the road ended before Hurricane Wilma wiped out the coastline and so it is. Rather than put up a fence and secure their property from trespassers we get signs prohibiting access to all of us indiscriminately. The power poles mark the path of the old highway so how it has now become private property of the the US Government I'm sure I wouldn't know. But we live in dictatorial times so the nude beach fanatics and the gay rendezvous of old are now off limits. I was no participant in either but neither bothered me near as much as this appropriation of a pleasant coastal walk. 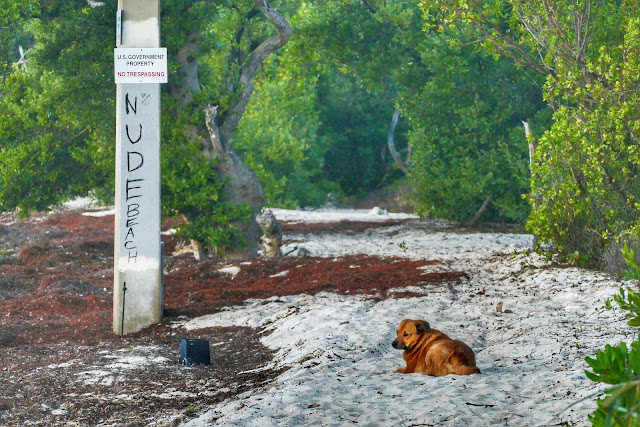 Recently the newspapers reported incursions on the Navy Bases in Key West by apparent Chinese spies, as bizarre as that sounds. Indeed a federal magistrate hearing the first case had some pretty harsh words about the lack of security at the base entrance as reported in the paper. These signs were put up before those incidents were reported but whether they are a response or just a decision to not bother with fencing I don't know. I don't care either. For an occasional beach walker like myself it is a shame not a life altering closure. 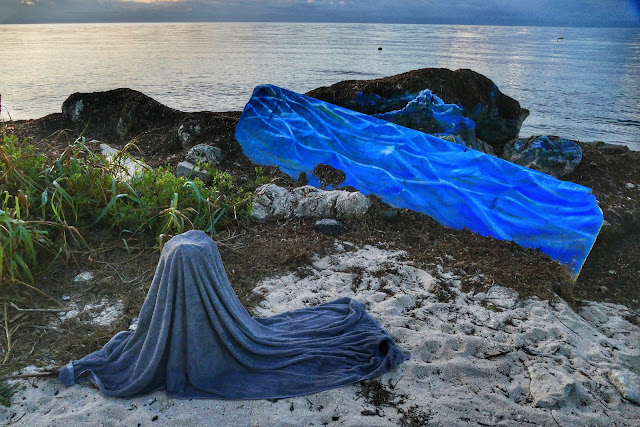 In the bad old days of no Internet and film photography the old Highway One used to pass right on the base on the way to Key West. As absurd as that sounds Boca Chica Naval Air Station was wide open. You can see the old entrance if you turn off Highway One south on Rockland Key where the side road turns it will point you right at a gate onto the base now used only by trucks for awkwardly large deliveries. That used to be the road to key West before 1982. 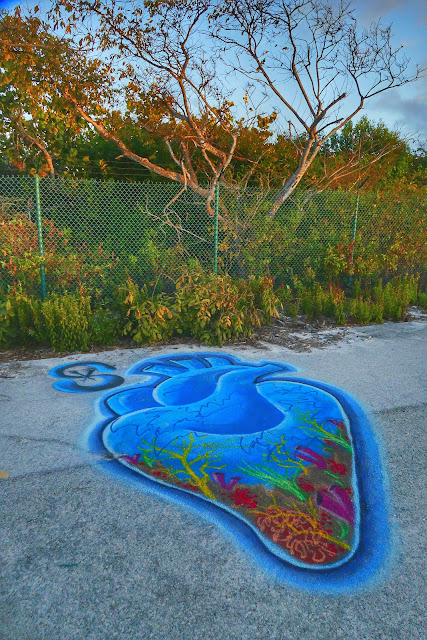 Now the restrictions on life in the Keys come one after the other and it is a shame. I remember swimming at the submarine pens north of US One which were closed a good few years ago in response they said to some irresponsible behavior by people camping and barbecuing in that lovely wilderness at Mile Marker Eight. Now closed for good. 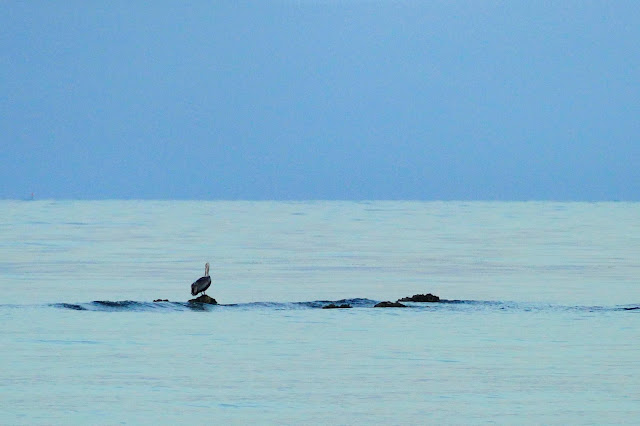 But we should not be downcast, there's still lots to see and enjoy and the bars and shops downtown aren't going away for those whose vacations are limited to Old Town. I still find places to explore with the indefatigably curious young Rusty. 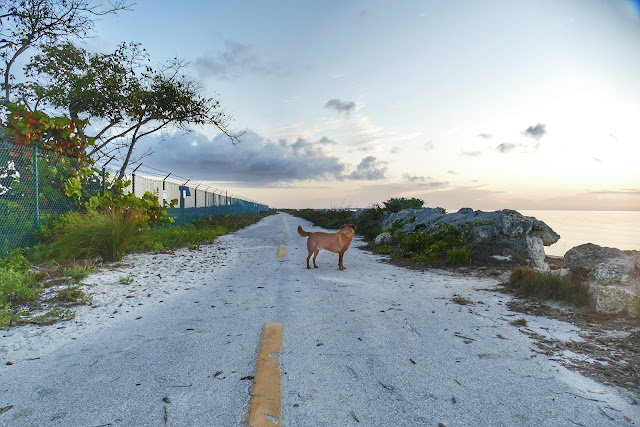 This one below I deliberately messed up with the in-camera white balance, a digital adjustment that can drive you nuts on a modern camera. If you set it wrong the shading of your picture will go haywire, but in this case I wanted to make the sky ridiculously blue as the background for the stick drawing of the tree. So I used a cold indoor setting to give the picture a blue tint. Works for me, for fun. 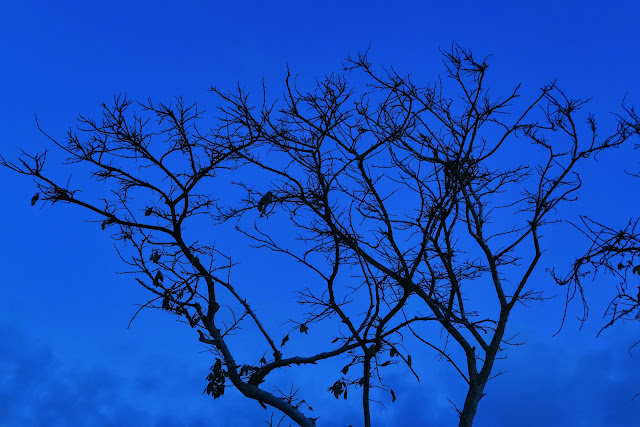 I saw a rather dismal little flag drooping in the still air, a spot of shadow on a dark morning. So I fired up the flash, a feature I rarely use to illuminate the object of the picture. Not really a success but I thought it was worth a try. 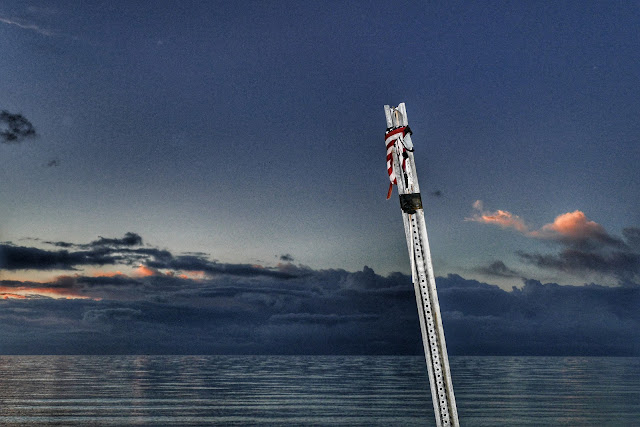 Finally I got back to the car with a bunch of pictures, a few thoughts and a happy dog. Our trip to Key West was cancelled by the driver (me) when we got to the highway and saw a long line of slow moving cars plodding toward Key West. I had the option of turning right and heading home so I did. Eight o'clock in the morning in the modern suburban Keys is hell on wheels. All the people who work in the city but can't afford to live there end up in a humongous traffic jam the last ten miles of the commute. I count myself lucky my shift starts at six in the morning and ends at six at night. Most days the road is empty on the way in and traffic is light on the way home when anxious commuters push the slowpokes to maintain at least the speed limit. 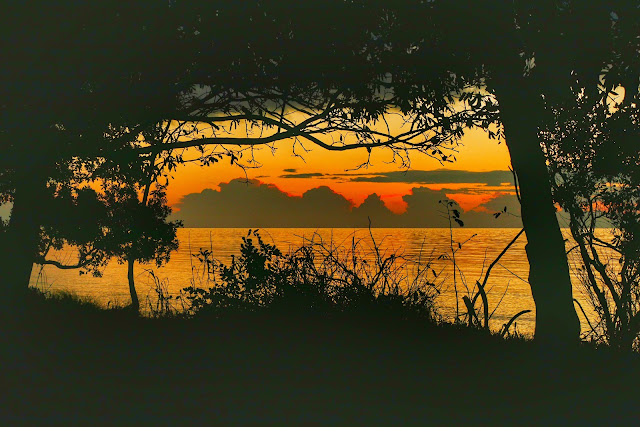 The word from the camper builder is that our Promaster should be delivered by late February and we are in the final stages of planning the interior details, which are really the province of my wife. Visiting Boca Chica Beach reminds me how lucky I have been to live here even in the gloaming of the bustling town Key West still has the reputation of being: quirky, artistic and free spirited. Don't think about spending the night in this obvious spot as the complaints have spurred frequent patrols and camping here is decidedly no longer allowed. One other thing I was never interested in doing myself but for those who might be that small adventure has been closed down. The beach is open and patrolled from 6 am to 11 pm. Night patrols are frequent and merciless. 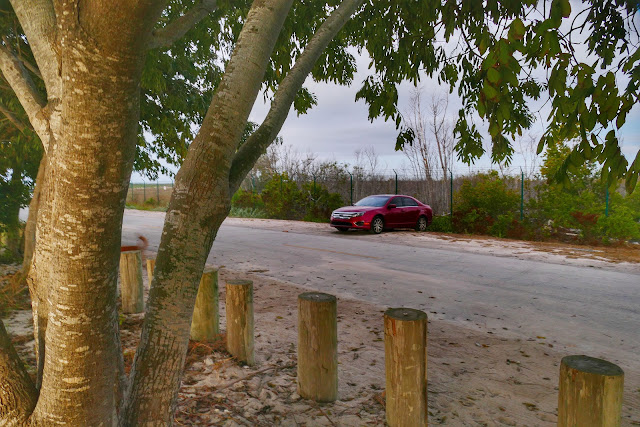 Here's hoping the rump of Boca Chica beach stays open for a good long while to the public in daylight with no further restrictions.
Posted by Conchscooter at 12:00 AM

Given that you are not the typical sunset-snapshot guy you sure do a great job presenting it, Michael.

Michael, Is this down Rt 941 to the South East of the runways? When you mention the places you photograph, (especially areas I have only passed thru on my way to Key West) I sometimes pull them up on GMaps and do some virtual exploring. Thanks!

Great photos. Even your “failures” are pleasant to look at.

Loved these pictures. A mini vacation without leaving my easy chair. As always, thanks for sharing.

I am glad they worked for you.
Boca Chica Beach is on Geiger Key south of Big Coppitt. You take the street south from the highway at the Circle K and keep going to the end. That should work.