Rusty moves in mysterious ways which I doubt he himself could explain had he the power of speech. Ever since the lockdown when we would come to the top end of Duval Street (known as Lower Duval for local reasons too impenetrable for mortal minds to grasp) and we would sit together on the water's edge looking out into the blackness of the night over the harbor. The city was silent and clean and virus-free. 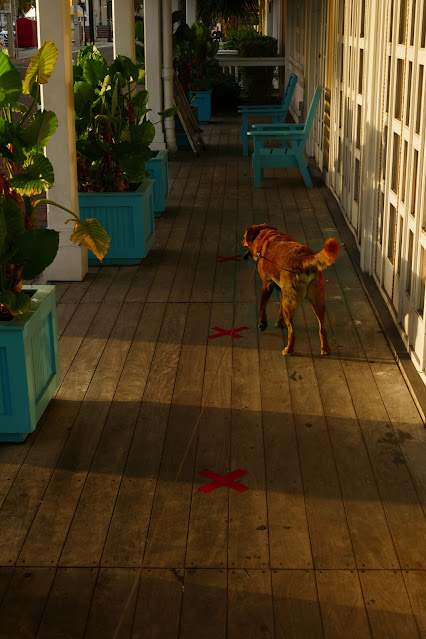 Nowadays, as though he too suffered from nostalgia he likes to come back to the Ocean key Resort and peer out across the docked jet skis and pine for the Good Old Days. I was looking at the reflection of the hotel in the car window and pondering how to frame it between the leaves when a man walked ponderously by and asked how "it" was going. Bored I blurted without even thinking. I wasn't really bored and I have no idea where that thought came from. "Aren't we all" was his sad reply as he shuffled heavily back to the diverting life of a Key West tourist on vacation.  Well, I thought, don't we make a happy couple. 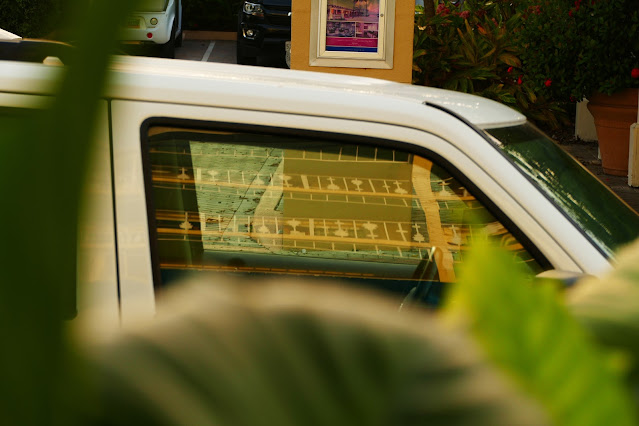 Key West is full of signs, little white flaps of paper pasted to doors windows utility boxes and lamp poles and most of them express sorrow at closures forced upon them by the coronavirus. They are so common nowadays I hardly notice them but for some reason a notice posted outside Sloppy Joe's caught my eye. Street closures will happen at random for a few days more as we finish up street repairs. 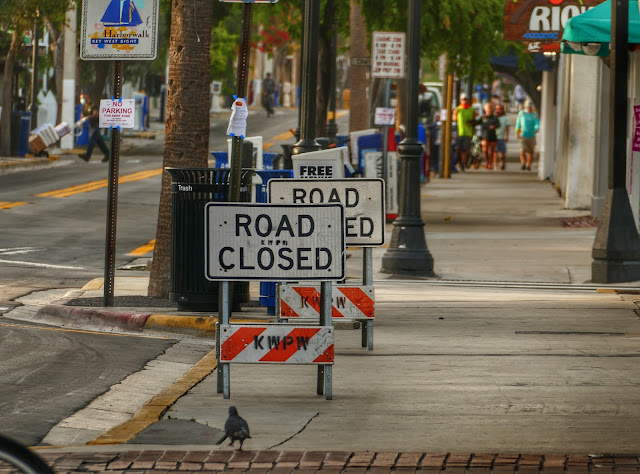 That should all be done by now and what a brilliant time to complete the task of repaving Duval Street. Usually the water bucket at Casa 325 is full of crap such that Rusty won't go near it but one benefit of fewer visitors is clean drinking water I guess. He was at it like a water buffalo in drinking hole. When he came up for air we pressed on St Paul's at the corner of eaton where there happens to be a viewing station. 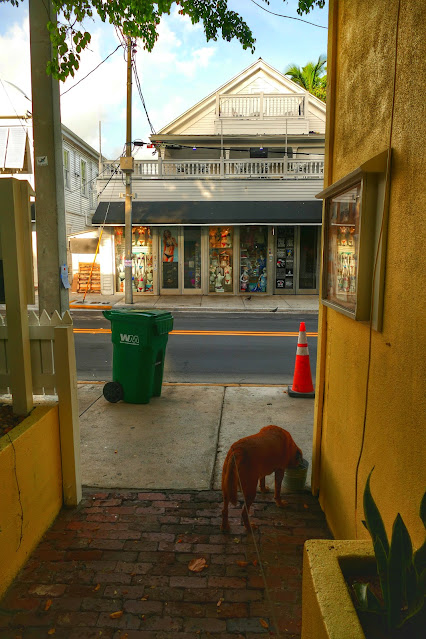 I was ready to sit and look for a while. 8:30 am and it was balking hot so Rusty wa sokay lying down for a bit. We watched a few people amble by, some bicycles and presumably some coronavirus particles wafting though I couldn't be sure. Key West does look pretty with a little rain and some aggressive budding of flowers. 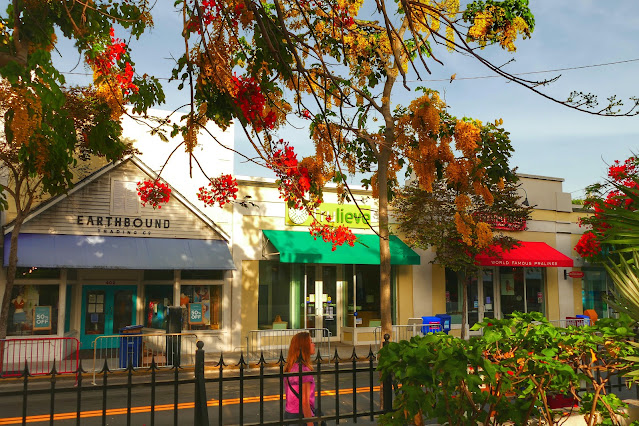 I am told Duval Street later in the day is a total shit show of exposed faces no social distancing and crowds everywhere. Oddly enough having been living a  monastic life of self denial since the Ides of March I prefer to avoid sharing my breath with the idiot crowds packing Duval Street so I take the word of eye witnesses that it is so. My wife's hairdresser told her that she took a golf car t tour to see for herself and it was as described. 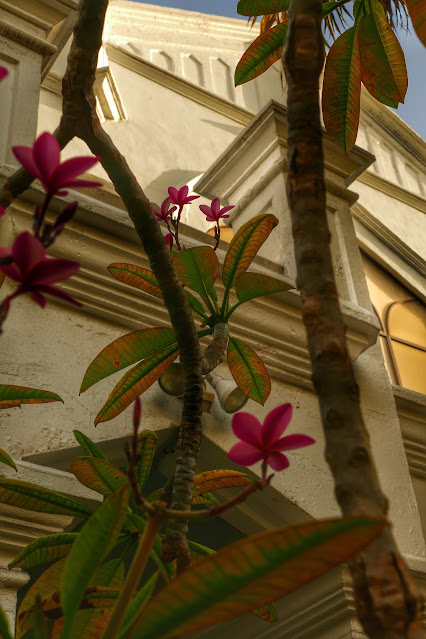 In order for my wife to cut her hair she heard from a friend of the existence of a very careful hairdresser and very expensive hairdresser who takes sanitation mask wearing and social distancing very seriously. It sounded to me more like a Prohibition era speakeasy than a haircut but apparently she presented herself at the appointed hour and had her temperature taken, washed her hands and was one of two customers in the room much further than six feet apart and everyone was masked all the time. That's for a safe haircut these days. 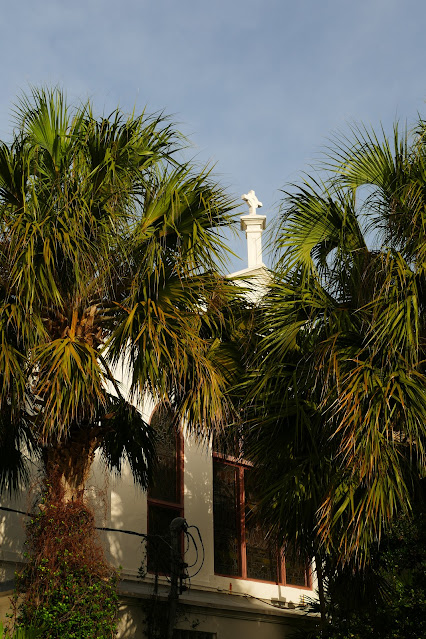 Meanwhile the crowds build and crowds cluster and masks are a symbol of weakness they tell us. This can't end well can it? A vaccine please...anyone? 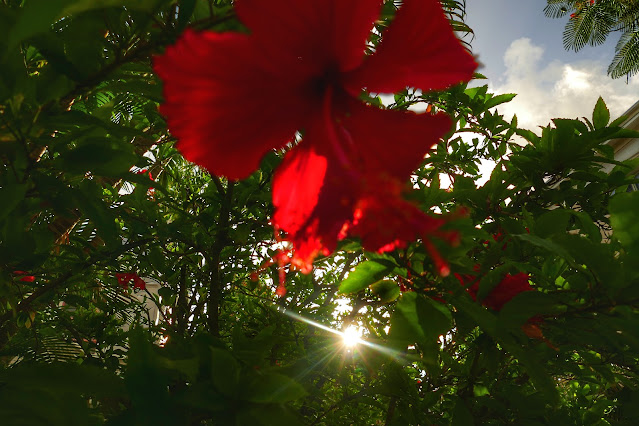 I noticed that bikini shop across the street from Casa 325 has a HUGE veranda. That made me curious and I checked out some Google Street Views. It appears to have a plethora of apartments above/behind the shop. I guess that's the 19th century secret to having a living/working city with people in close proximity to their workplaces without the need for personal transportation. It's like Paris or St. Petersburg, Russia, but downsized. Each of those are full of 5-story apartment buildings with businesses occupying the building's street-level.

Pfizer seems to think their vaccine will be ready in October. I'll believe it when I see it (and it's been in use for several months). Realistically I think we’re looking at next spring for a vax. 😐

I think Duval could be a really good example of work/living space.
I think the numbering system on Duval is a good example of mnd bending. North is up in the northern hemisphere an d the numbers are down. If life made sense we would be bored.