Things got weird on Monday. In a time of widespread general weirdness that's a difficult thing to say. Yet something changed in Key West after the city manager sent out a notice advising everyone has to wear a mask everywhere in the city. And with that, the only places you can be in Key West without a mask are at home or in your car. Or in your workplace with the door closed to your office if your boss allows. 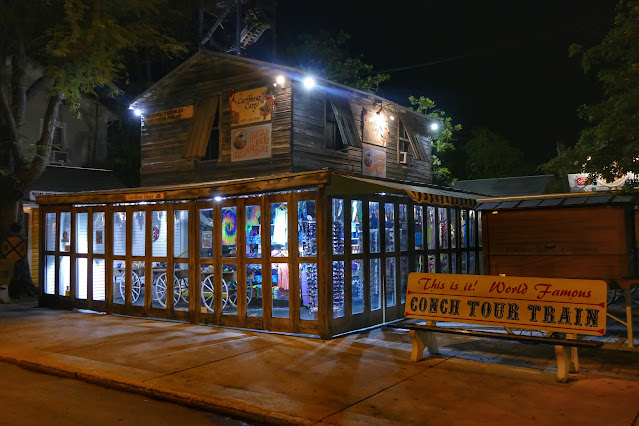 I can't define what changed but a change there was. Florida has been racking up insane numbers of positive tests every day, between ten and fifteen thousand new cases daily and numbers in the Keys have been rising steadily with only 17 ICU beds throughout the county. The city of Marathon has a tent hospital with four beds and only one of them ICU equipped...thanks Hurricane Irma. 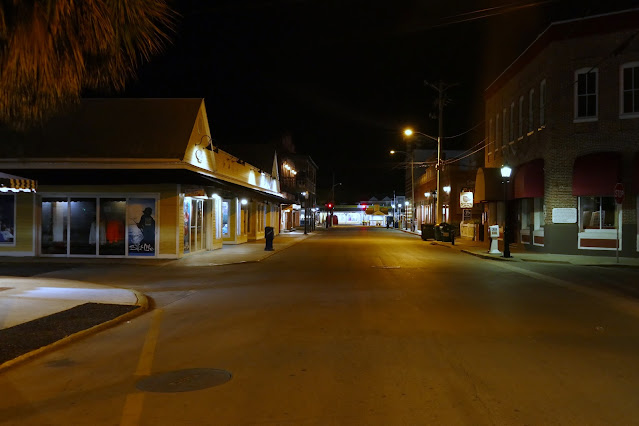 The roadblock in March made for a strange apocalypse in the keys and then the pressure got too much and we reopened to tourism to get money flowing. For a while some people seemed to think the crisis was over but it should be clear by now there is a lag between infection, symptoms and severity of illness so it takes a while to reap that which we have sown. So now after a brief period of normal life for the unwary we find ourselves back in crisis mode. It feels like the rollercoaster will never end. 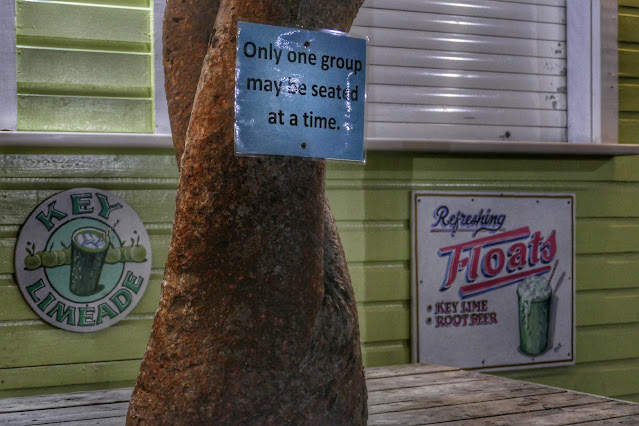 Politicizing wearing a mask has turned into a social and economic nightmare that has us by the throat. I should have thought burning your social security card would be a better symbol of freedom from The Man than not wearing a mask and infecting everyone you know and love. But my rational mind doesn't compute like many other people apparently so I stand on the sidelines and wonder at the weirdness of those Other People. 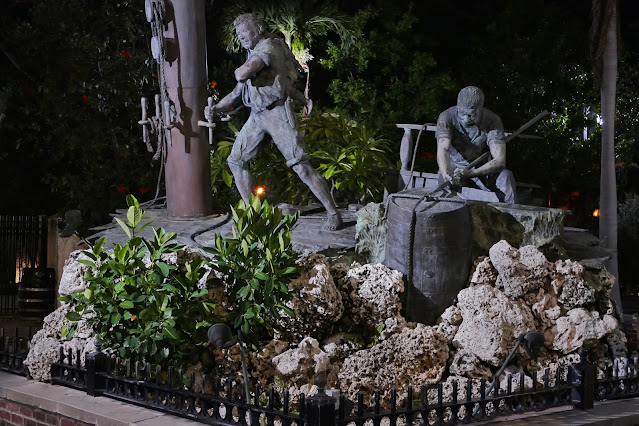 I wandered around the Pez Garden at 5:30 in the morning checking the statues of famous people from Key West history and I thought about the wars and alarums they survived and the plagues that were part of life in the 19th century when no one understood where yellow fever came from.  They plugged ahead and did what needed to be done and buried their dead. I was reading about the 'Flu epidemic of 1918 incorrectly called the Spanish 'Flu and apparently there was an endless debate even then about wearing a mask. Nothing much changes it seems. 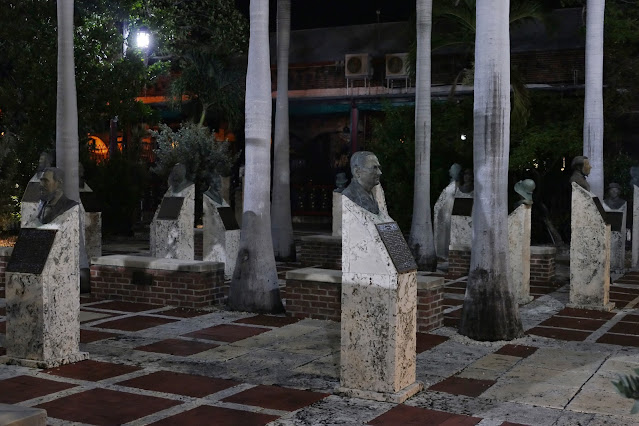 As the virus seems to clamp tighter every day on the Sunshine State I try not to look too far ahead. Europeans are bracing for the second wave so they are going out to beaches and bars while they can as they have put the first wave behind them. New York state seems to be out of the weeds after a couple of months so I am trying to hope that by late September Florida will have calmed down too with God knows how much illness between now and then. I have no facts to back up my hopes but there it is. 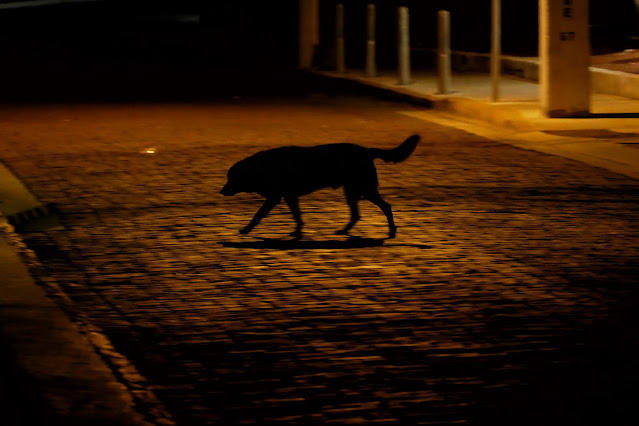 I expose my wife and her failed immune system to the virus by coming to work but we do what we can which is all any of us can hope to do. I hope our very cautious RV road trip will help shake off this siege mentality that is gripping me, but if the world outside is as crazy and mask-free as iu have heard we may have to retreat back to the Keys and get back into isolation once again. If we don't wear masks, as feeble as they seem, it feels as though this will never be over. 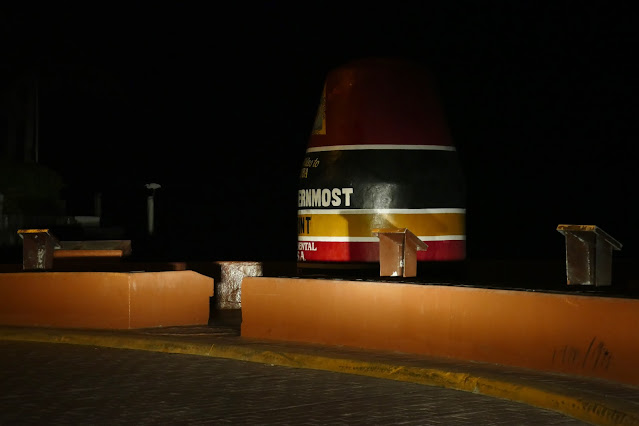 Thirteen million people worldwide have the virus and even our President is finally wearing a mask. Those two facts alone should tell us all something: we missed the boat on controlling this thing. I wish we had this mask ordinance in March but hindsight is too easy. Masks it is now, until they sound the All Clear.
Posted by Conchscooter at 12:00 AM

All I can wish for is: Let's stay safe and not risk each others life. In large parts of Germany has become a courtesy to others to wear a mask in public. And yes, it's annoying but it protects others from spreading one's germs (not only c-19 related). And there are still a few tin foil hats who believe that it's all a hoax created by *insert scapegoat of your flavour*.

Go to fox35 website, they reveral the fraud in positive cases. Some labs reported 99 percent positive results when the actual numbers were much less, as low as 10 percent positive. Story is being covered up! This is not a conspiracy thing, this is factual investigating reporting.

Some Florida labs are reporting a 100% positive rate. Please vote for Biden, as this “disease” will disappear as soon as the election is over!!!

Lots of news about under reporting too. This too is not a conspiracy thing, this is factual investigating reporting.

I feel as though we have lost control of this virus. All I can suggest is look after yourself as best you can and stay out of the emergency room. Masks and isolation as much as possible. I do not recommend ventilation as a way of life, certainly not for three weeks and with a fever of 103 and total isolation. ICU is lonely enough without the addition of coronavirus complications.I was ventilated for a day and it was the worst of the 90 I spent in the hospital.
For the longest time conspiracy tin foil hat nutters said fewer people died than of the 'flu. Covid 19 fixed that.
Then the death rate plateau'd until it didn't.
Then hospitalization was the thing to watch. 48 Florida hospitals are at capacity.
ICU capacity is between 1 and 3 beds lately in the Keys.
What's next? It will go away if we re-eect Trump, the architect of our disaster?
Politicizing the pandemic as a short cut to re-election is the most immoral course he could have taken; so he did. The Good Book says as ye sow, so shall ye reap and here we are.

People like things just as they were. They take comfort in knowing what to expect from the world, what they’re going to get from everyone, and they really don’t want anything to change. And they especially like being in the little box they’ve always been in. By growing, changing, and developing, we’re changing their status quo, stirring the pot, we’re rocking their comfortable little world. And people really hate that.
What is important to them isn’t us, it’s their comfort and maintaining their status quo.

People focusing on how the numbers are collected, how they are manipulated in this direction or that. When we lose track of what's important in our rush to keep track of what's measurable, we fail.

“The word 'risk' derives from the early Italian risicare, which means 'to dare'. In this sense, risk is a choice rather than a fate. The actions we dare to take, which depend on how free we are to make choices, are what the story of risk is all about. And that story helps define what it means to be a human being.”

Change brings risk and risk brings fear. Give people a chance to avoid change, and they'll likely take it.

It is not the strongest of the species that survive, nor the most intelligent, but the one most responsive to change.

Now a quote on politics;

“A democracy cannot exist as a permanent form of government. It can only exist until the people discover they can vote themselves largess out of the public treasury. From that moment on, the majority always votes for the candidate promising the most benefits from the public treasury, with the result that democracy always collapses over a loose fiscal policy--to be followed by a dictatorship.”
― Alexander Fraser Tytler

This whole virus problem is a leadership void. We have been tested and found wanting.
That’s all.

Leadership, state, local or federal level or all the above?
Is there no individual responsibility ?

So happy to see a city that still has statues. Shhh! Artwork has become divisive.

A married couple in our neighborhood went to a Florida clinic to be tested for corona virus. Not sure why. The wait was longer than they anticipated, so after checking out, they left the facility without being tested. Three days later they got a notification of their positive test results. Head spinning times.

Individual responsibility is a misguided dream the libertarians seem to think works. It doesn't, at least not on a governing scale. It's like how trickle down doesn't work, no matter how much they want it to, nor does so many of these other wacko ideas. Adroit pontification on other peoples blogs doesn't work either. It comes across as just plain preening.

Our State Governor and Department of Health director closed down the state and instituted a stay at home order. They told people to social distance and wear masks. People and businesses sued them. They protested at the State Capital and Governor’s Mansion as well as the health directors private home. They showed up carrying AR-15’s to protest wearing masks. The State Senate started hearing on limiting the shutdown powers of officials. People on both sides of the issue attacking each other physically. Our health director resigned over the harassment.
The state and local Police are called out along with the National Guard to restore order and that just fuels the mobs fire.
We opened the state back up with limitations and people on both sides filed lawsuits and protested. More of the above.
People on both sides only want what they believe and the good of the whole is not important. They get together with other people that believe exactly as they do and work themselves up into a frenzy with the help of news organization and social media.
How to you lead an unreasoning out of control mob.
Society is breaking down.

Trump should have just worn the mask.

George Will has a startling op-Ed echoing your thoughts but aiming at the President.
https://www.washingtonpost.com/opinions/this-is-what-national-decline-looks-like/2020/07/14/ef499fd4-c5f0-11ea-b037-f9711f89ee46_story.html?hpid=hp_opinions-for-wide-side_opinion-card-c%3Ahomepage%2Fstory-ans

Read it and weep.

When you are allowed to throw bottles, spit on, shoot, police officers, and destroy public and private property, I’d say you have a nation on life support. It’s called anarchy.

And when you are allowed to kill black people in their churches, exclude them from their rights and deny them freedom, they then have the gaul to throw a bottle, spit on you and call you SANDY

Gee, did I get sidetracked to the wrong blog? I thought this was about a little brown dog, and his travels. Yikes! Calm down.

I am not American and maybe thats why it blows my mind that a virus and politics can go hand in hand in anyway.
To me, its all about responding to the threat the best way you can and keeping as many people as safe as possible, thats all.
This whole political left and right to do with a global virus blows my mind.

and the truth (facts) be damned