You don't have to immerse yourself in Nature to find beauty outdoors and while I cannot say this is anywhere near as immersive as Ansel Adams' Snake River photo of international renown it was a pleasant interlude in a longish drive when Rusty reminded me we wer ein no excessive hurry. I spotted the land cleared for construction and we went for a romp just before the next shower dumped on us. 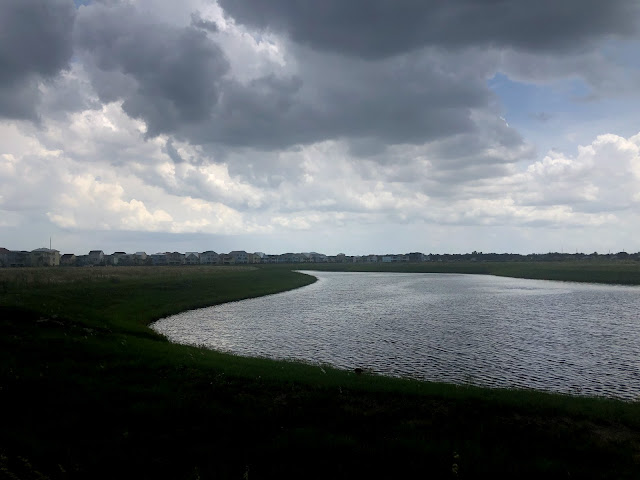 I don't suppose most Americans have much idea what the difference is between National Parks, Bureau of Land Management land and National Forests but they are distinct entities offering a mixture of recreation and land exploitation by businesses to varying degrees. I'm writing in broad terms here as my interest is in the concept of dispersed camping. Actually  the southernmost National Forest in the US is El Yunque in Puerto Rico a place I have visited briefly but the one I have wanted to explore in greater depth is Ocala National Forest, the southernmost on the mainland US. It's 400,000 acres of rolling sand covered in pine forests where hunting and fishing and camping and off roading are the activities permitted on a large scale. To camp here in summer is not to everyone's taste but we got the quietest most socially distant  Fourth of July in living memory. 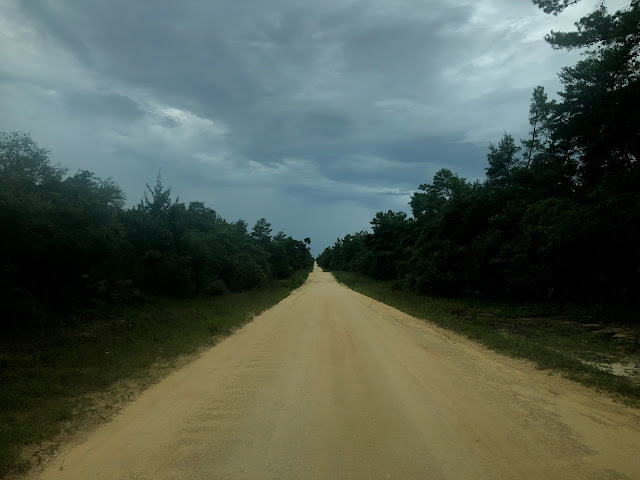 To do the forest correctly you should be under 30, with a Shenandoah beard tattoos and a four wheel drive truck filled with stuff. When you see a couple of old duffers pottering around their FedEx delivery van putting out mosquito repellent devices you should wave casually as you bounce past at 50 miles per hour, your lean hunting dog in the bed, tongue flying as you leap to your next destination. I had hoped to find the spot looking out over Hopkins' Prairie unoccupied but I guess that was too much to hope for so I we tried a secondary route about which my wife had some reservations. The van is just under ten feet tall and I can tell you there are leafy branches considerably lower than that on many of the narrow trails. My impetuous descent required a slow considered reverse back to the main road.  Sod it. There's room here to be off the side roads and the wooded view is pretty much the same everywhere. We settled in. 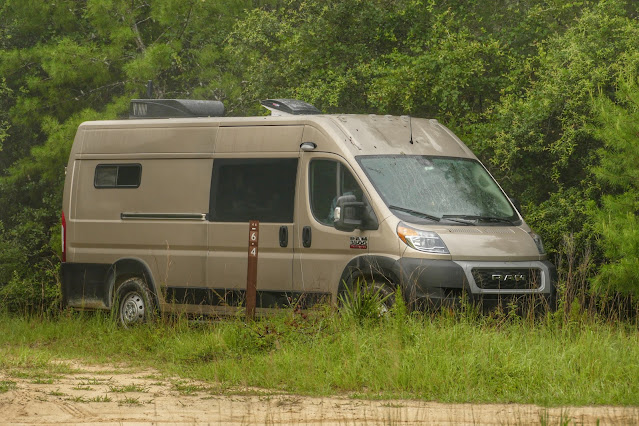 Rusty and I took off on foot to check out the prairie  with my wife, suddenly reborn as an internet meteorologist advising imminent heavy rain. This was whee I wanted to park roughly but Rusty gave me the stink eye and hurried back up the sandy trail. 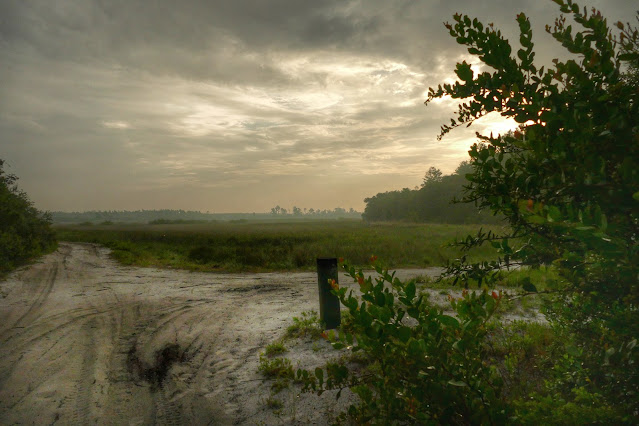 I liked the look of the prairie but I was alone in the Golden Van to hold that opinion. 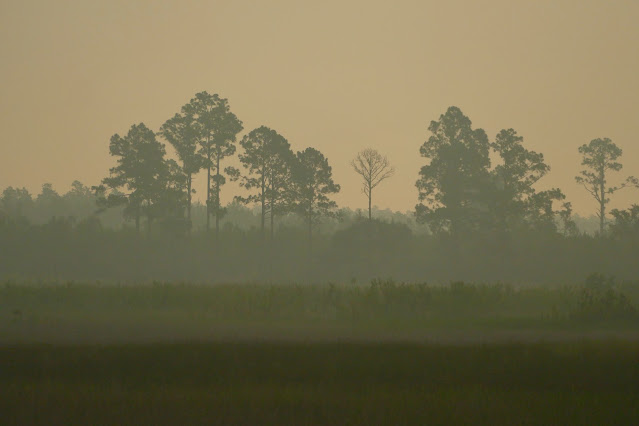 Narrow dripping trails were more to Rusty's unaccountable taste and from time to time we found the spot where Hagrid had absent mindedly snapped a sapling or two. I wondered if it was some sort of traffic control measure in case anyone were riding a seven foot tall offroad quad bike or something. I saw them in several different places. 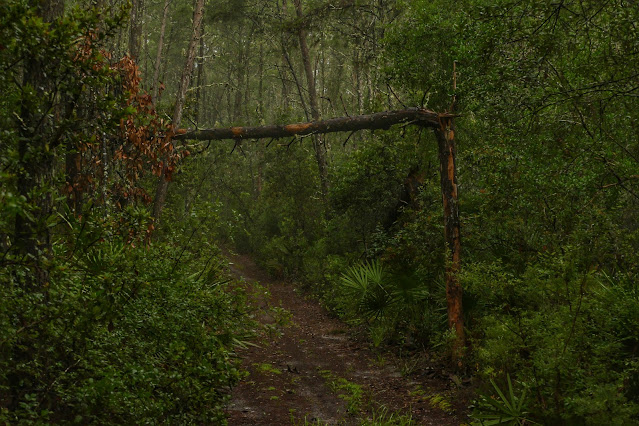 The recent rains had wiped out all traces of activity and it looked as though we were the only people in the forest, an illusion rapidly disabused when we rounded a corner and found a pickup parked in the bushes, a silent sentinel to what was I assumed a campsite approached from another trail. Far be it from me to wreck someone else's illusion of isolation so we investigated no further and never heard a peep from that direction. 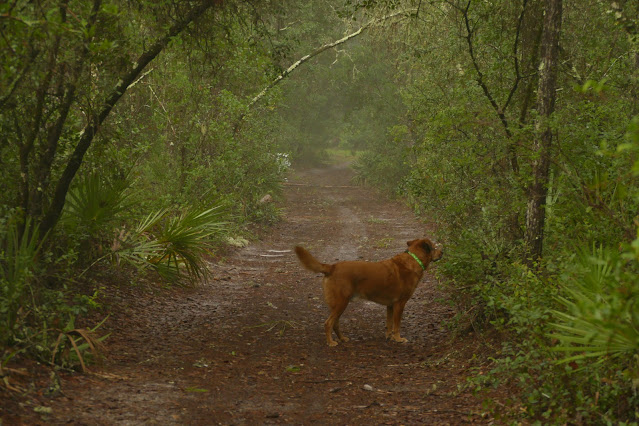 There were lots of directions to explore and Rusty finally seemed to grasp the value of van life as he trotted on ahead, smelled the air and waited patiently for the photographer of the expedition to catch up floundering through loose sand. 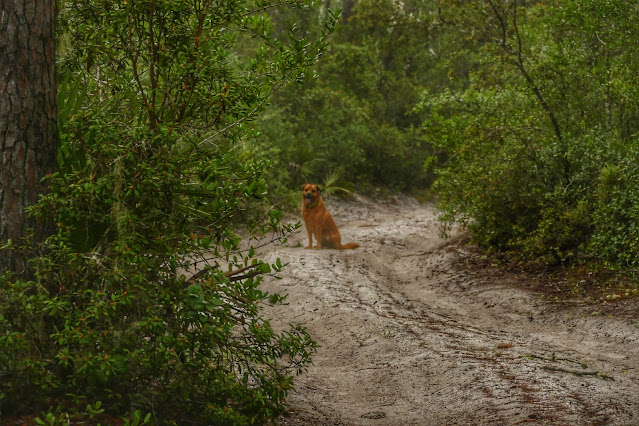 We also discovered loose balls of  lichens lying all over the place like survivors of an epic moss ball fight. They were doing no harm and had been there long before I showed up full of curiosity so like the mysterious truck I left them in peace and moved on. 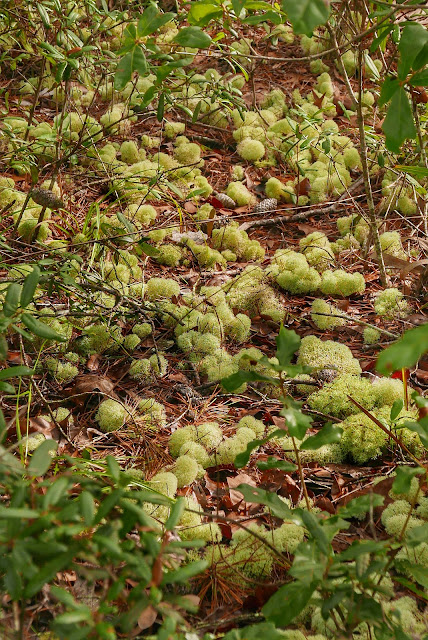 Nothing like limp Spanish Moss to illustrate a damp afternoon. If you peel back the green cover you get a wiry black tendril that looks like a horses mane. That's why it's called horse hair when you stuff cushions or mattresses with it. 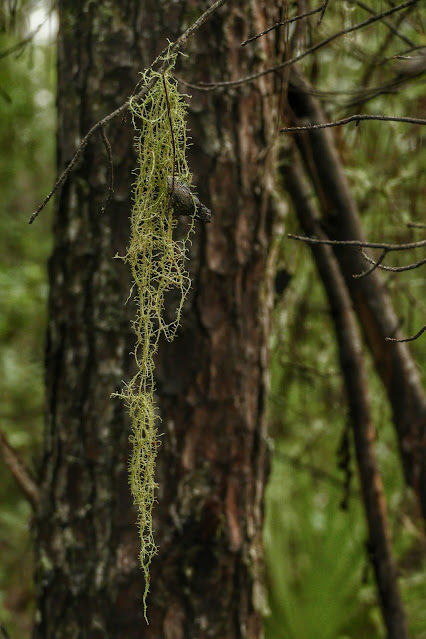 Something went horribly wrong and a few rays of sunshine broke through the cloud cover in violation of all protocols and weather forecasts and suddenly the forest lit up. 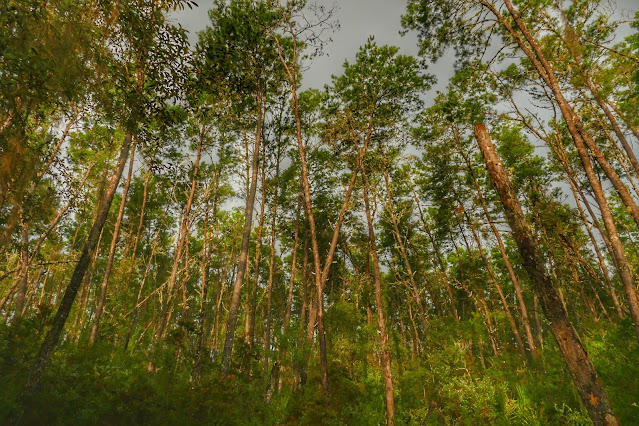 The sun lasted a nano second and as we trudged back to the van in the drizzle I wondered how Herself was coping with the dank conditions. She had never expressed any interest in the Ocala National Forest. 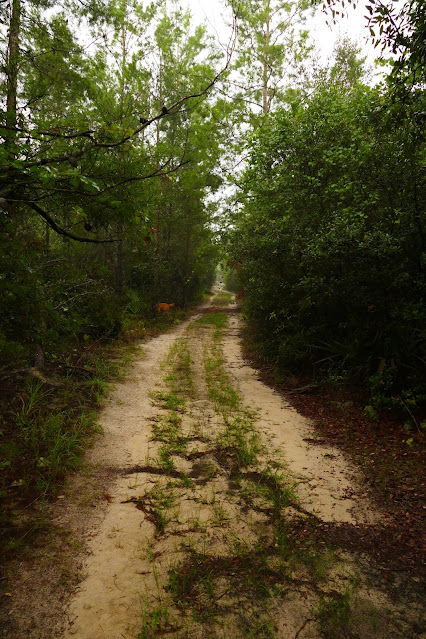 The Tampa RV show last January was pretty much a bore for us with our van already in the works at a custom shop, but the one thing we found that sucked us in, literally, was a vacuum cleaner.  And yes it sucks up dog hair like there's  famine. It turns out that when it's raining there is no reason not to suck up Rusty's DNA in his absence. 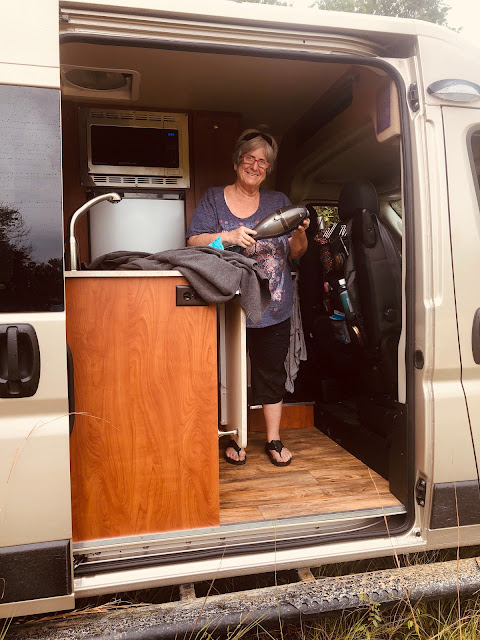 The air was humid and close which seemed like the perfect test of our anti-mosquito devices and for the entire 24 hours we spent here, doors and windows open all night  and all day neither of us got bitten and my wife is an insect magnet. The blue box is a Thermacell Radius repellent that uses a charged internal battery and a container of fluid which at fifty bucks seems like a deal. We also had a portable blue light zapper visible in the second picture below hanging in the back doors. 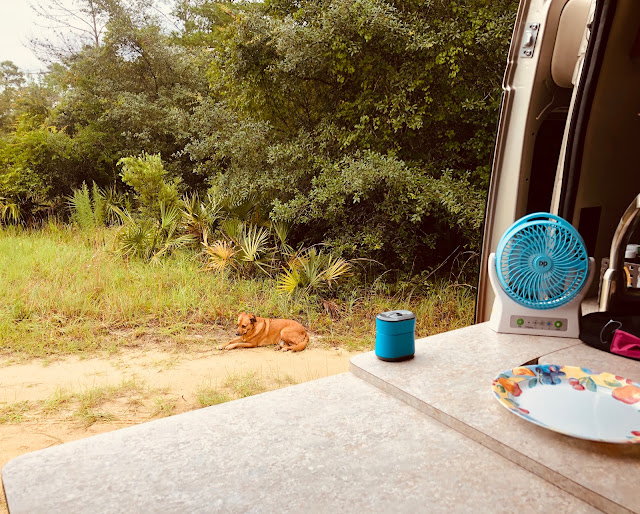 We also puta Hammacher Schlemmer personal repeller in the front window. Between the three of them the mosquitoes apparently didn't stand a chance. I assume they worked but its impossible to prove a negative. perhaps the bugs were taking the day off too. But for us it was cool enough to sleep with the van wide open and a fan plugged in and buzzing all night. Rusty loves the indoor/outdoor lifestyle and according to my insomniac wife he popped in and out as he pleased. In the Everglades he referred to sleep alongside me, here he didn't want to know me until the sun came up when I found a snout in my face inquiring urgently when was I going to get up. 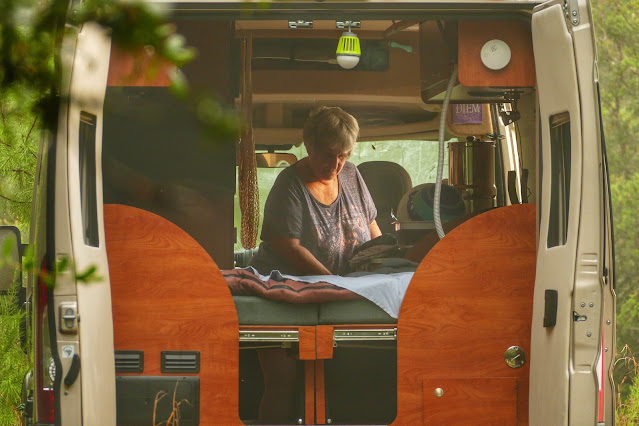 With a thirty five gallon water tank and no need to run the air we living high on the hog but at first blush it isn't easy to adapt to new routines. My wife found she needed to relearn skills from life on a  sailboat, taking your time, staying organized and remembering where everything has its place. Despite a determined drive to help increase Jeff Bezos's unnaturally high net worth we still left home without a mirror, a crippling shortcoming in the shaving department, and I have yet to learn exactly which cubby hole holds what. This leaves me rather dependent on my wife and I find myself asking annoyingly where is this or that like a bored five year old on a wet afternoon. She is very patient with my shortcomings but it does inhibit me a bit form taking action if all is peaceful at that moment. 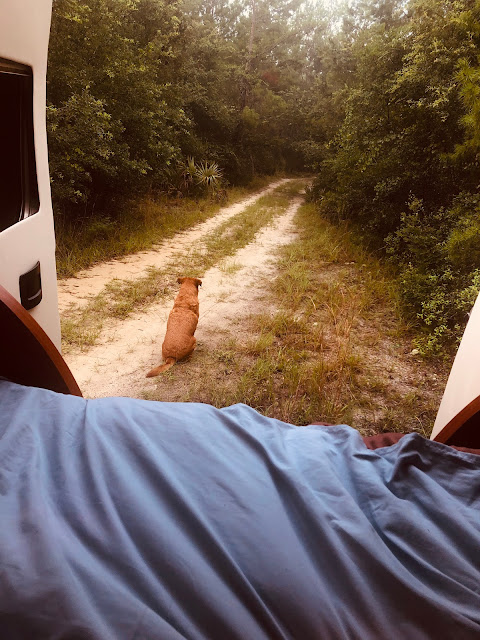 Within its limitations the overnight camp worked well. The weather as usual on my days off was execrable but the van did what was needed and did it well. For our part we lamented the enforced isolation as we do like to get out and seen human made stuff from time to time and for some reason getting used to the living space, all 72 square feet of it, takes up all available time. It's weird but I never did get to sit down with my book. 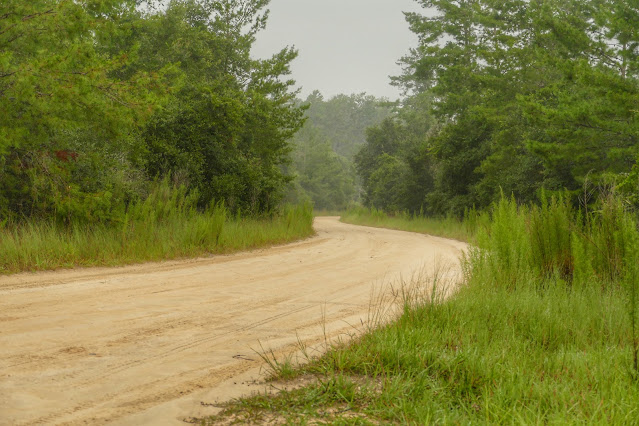 Rusty finds the van very odd, full of swaying motion and loud noises and strangeness all round. However he is not just a creature of habit but he is smart and on the way back south he climbed on the bed which we left open for him and settled down to snooze by himself.  Changes of routine exhaust him but I am hoping he starts to see the van as  a source of interesting walks more than a source of weird noises. 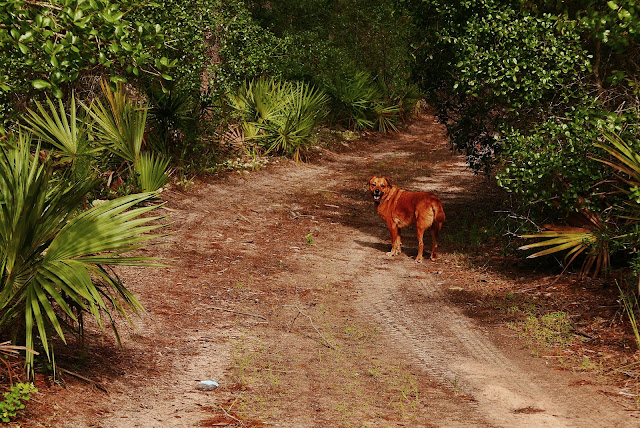 I think I can say both humans see a solid future with this peculiar mode of travel and I am hoping Rusty will be on board too.  In a  couple of years I hope it will be unremarkable and normal.
Posted by Conchscooter at 12:00 AM

Email ThisBlogThis!Share to TwitterShare to FacebookShare to Pinterest
Labels: VanLife

Fantastic, we've done what you are doing and it is life altering. Go for it. Slow and deliberate! Enjoy every minute of this!

Happy for you that ya'll got to practice retirement before it happens. Made me homesick to see Ocala. I grew up near Gainesville.

Glad you are getting away a bit and trying out the van. Bob's standard approach to looking for something (before asking the wife) is "where would Lynn tell me to look?" Works most of the time.

I too lament adding to Bezos' wealth on a very frequent basis but it makes life much easier for us. Let's face it, the man built an incredible product. I hope he is like Buffet and Gates, giving much away. Will have to look that up.

Good that you have an effective mosquito plan. How do you deal with wet dog?

Layne's hair is short! But it will grow. My first post lockdown hair cut was the opposite....too long still.

Hot and steamy in Chicago ... you will be right at home when you come north.

How nice you had a great time with the new van. What a super place to go to, for the inaugural voyage. Looking forward to your adventures in camping!

These days it’s hard to not use the Bezos supermarket. Impressive that the only item forgotten was a mirror. Any longer pre-retirement trips planned? I’ve heard that finding dispersed camping in FL is challenging.

It can be difficult but you can try the side mirrors.

Thanks for the lengthy and interesting inaugural post. Super fun pictures, and I think rusty is doing a great job as the second navigation assistant. Camping in different areas of the country will be such a learning experience. Glad you guys had fun. Always fun for us readers to follow your adventures. As always, thanks for sharing.