We took the backroads of Kentucky to arrive at Bardstown, a place we had visited previously, in a time before coronavirus when bourbon tasting was permitted.  For this town of 11,000 is the world capital of bourbon manufacturing as they describe themselves. It's a small town with several titles and one could be described as quite unsettling. 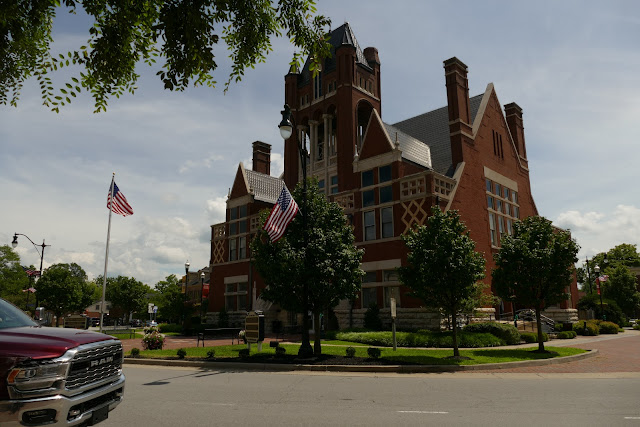 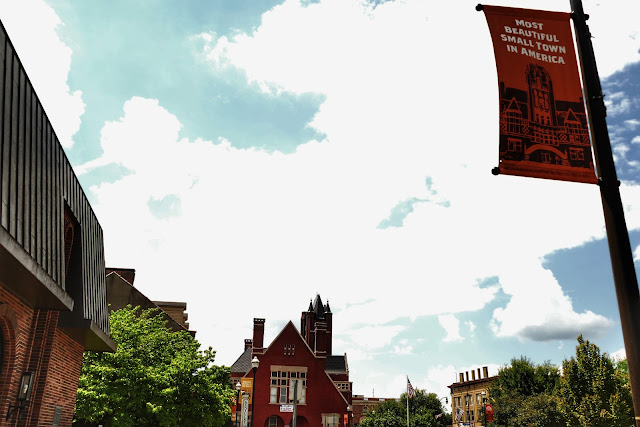 There is of course an outer suburb offering the usual array of non tourist services but at the heart of Bardstown there is history and in abundance. 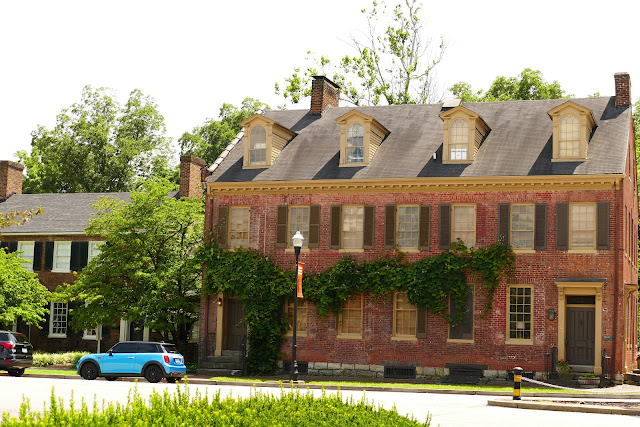 I couldn't find the historic marker but I know one of these old homes was where Virginian  William DuVal was called from to serve his 12 year term as governor of Florida when Florida was still a territory. He was a lawyer and he started his adult life here in Bardstown on what was the wild frontier!  I don't suppose he knew or cared that the almost main street in Key West was named for him. In those days Whitehead was the main drag in Key West and it was named for one of the four men who bought the island from the Spanish lease holder, Juan Salas. 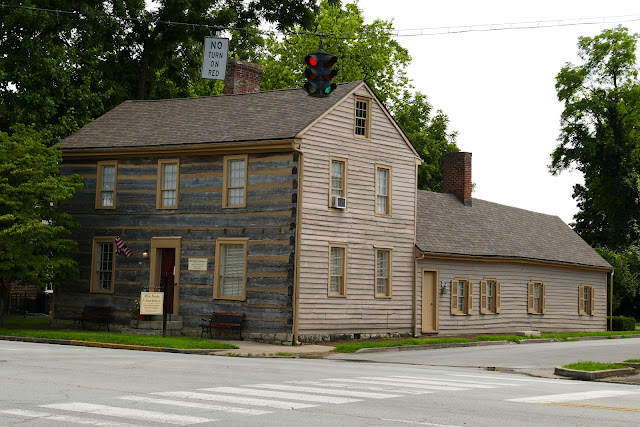 There is no doubt Bardstown has its beauty. However as we drove into the town we were listening to a podcast by Vault Studios which my wife had on her phone. It was ten half hour segments so we listened on the way in and wrapped it up after we left so our heads were filled with quite a different Bardstown from the pretty town or the bourbon town as it likes to be known. 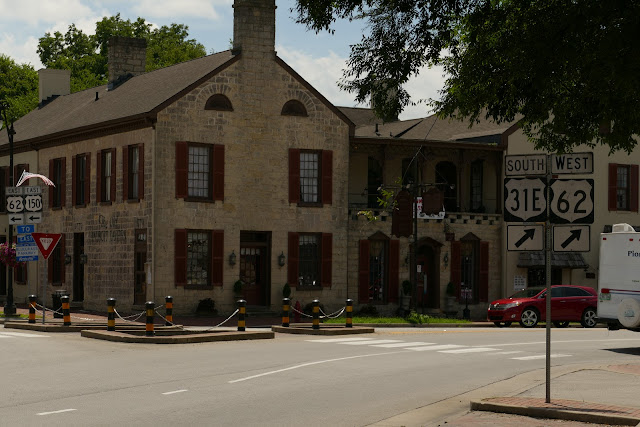 As we drove through the countryside under steaming hot skies as the sun had returned, we heard a horrific story of murder and revenge by persons unknown starting in 2013. A police officer was ambushed and shot dead on The Bluegrass Parkway, a mother and daughter were bludgeoned shot and stabbed to death in their home, a mother went missing and her father was shot dead, all in the space of three years. There have been other murders in America's Most beautiful Small Town but the five hours of the podcast was devoted to these deaths and trying to name a suspect in what is as yet an unsolved murder spree. 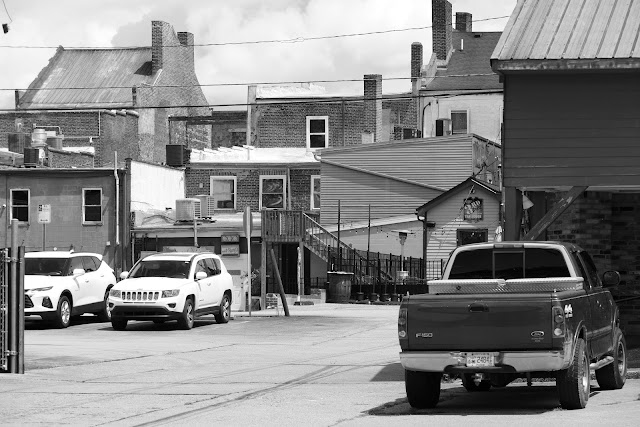 I have to say we both were glued to the story as it unfolded and the expert story tellers unraveled what at first seems to be an incomprehensible drama. There is a suspect and a likely accomplice and yet no clear motive has been uncovered. Drugs are said to be a huge problem in the The Most beautiful etc...etc... 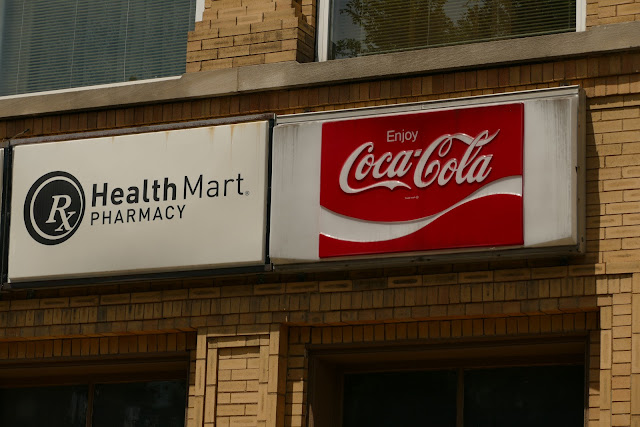 As you can see from the newspaper happy news sits alongside grim news and murder charges are almost below the fold  on the newspaper found in the paper stand in bardstown, which as I think I have mentioned is the Most Beautiful Small Town in America. Golly! 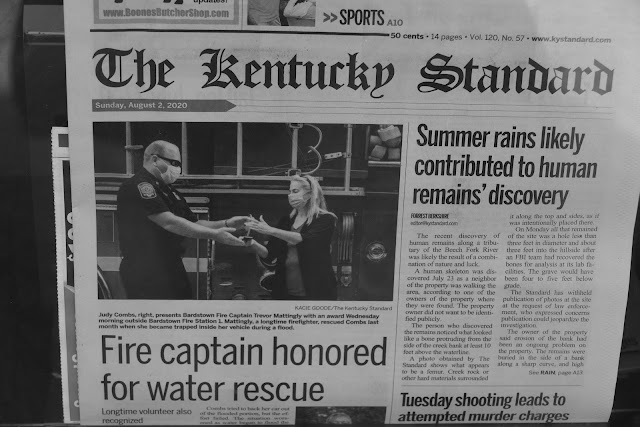 Layne went shopping for trifles while Rusty and I set out in a. zig zag undirected hunt for William Duval's home. I took pictures of whatever caught my eye as Rusty led us between arches of shadow. 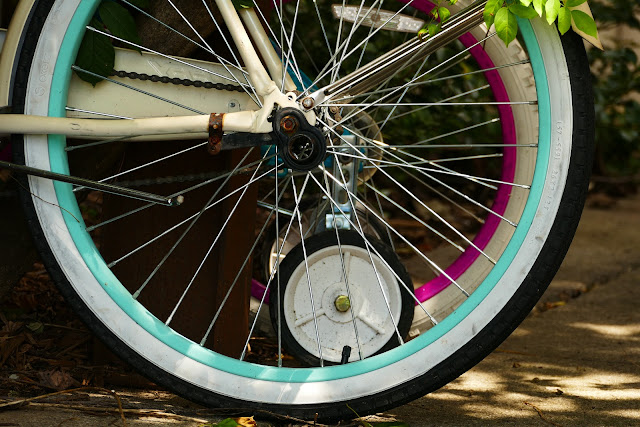 This is a scale model of the paddle steamer Perseverance by a man called John Fitch. He got no credit for inventing a new and efficient way to navigate rivers which led him to morphine and drink and an early death. He wrote his own epitaph in his day found after his death.
“I know of nothing so perplexing and vexatious to a man of feelings as a turbulent wife and steamboat building. I experienced the former and quit in season and had I been in my right sense I should undoubtedly have treated the latter in the same manner, but for one man to be teased by both, he must be looked upon as the most unfortunate man in the world.” 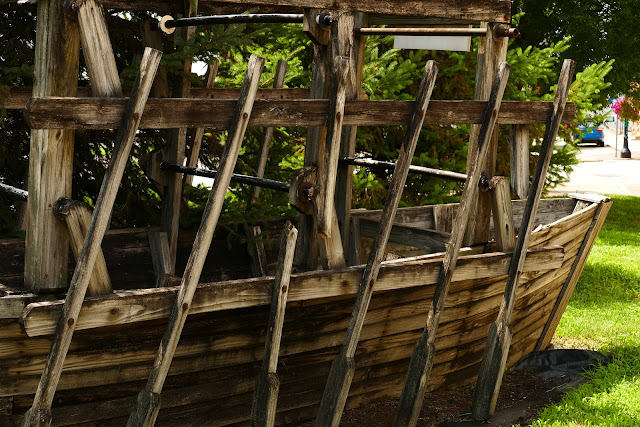 Rusty and I made our way back to Gannet 2 parked like a car in a. car space at the side of the street and waited for Layne to get back from her hunt for dust catchers. It was a Sunday and not all stores were open though masks were reluctantly worn inside the store per gubernatorial mandate. An order that has annoyed some people it seems. You'd think by now the mask debate would be finished but it seems we are stuck with it as much as we are stuck with the damned virus. In a hundred years we have learned nothing. I exaggerate but it feels that way sometimes. 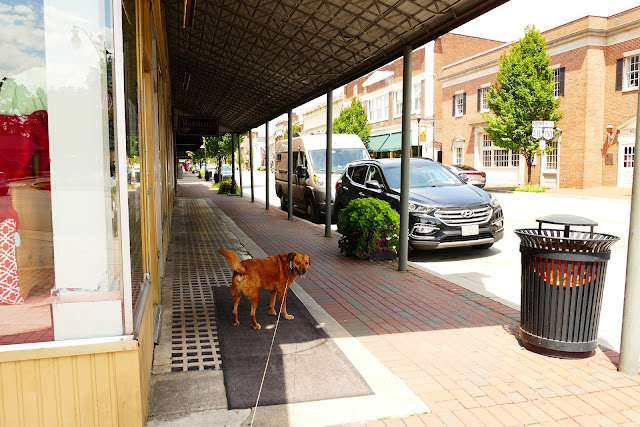 Talking about he Bardstown murders I happened upon a picture of Officer Jason Ellis who was driving home one morning at 2 am at the end of his shift. He found some cut tree limbs across his exit from the freeway to his home and as he tried to move them he was killed by shotgun blasts from possibly two guns hidden by the side of the exit. 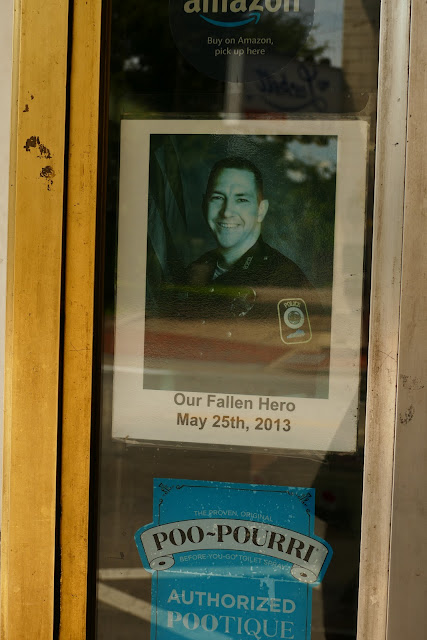 That a fellow officer with whom he did not get along was later fired from the department was not a coincidence according to the podcast. Riveting stuff and we listened as we drove into town. 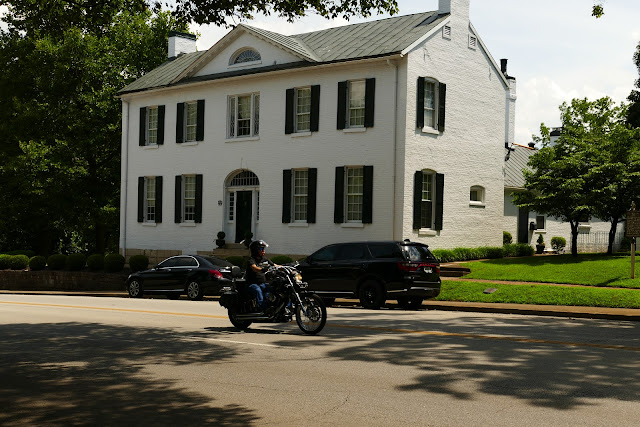 Aside from the drama. which has happily nothing to do with tourists, Bardstown is well worth a stop. In normal times the area is packed with distilleries and tastings and the architecture and history are fascinating. This was indeed the Wild West during revolutionary times. 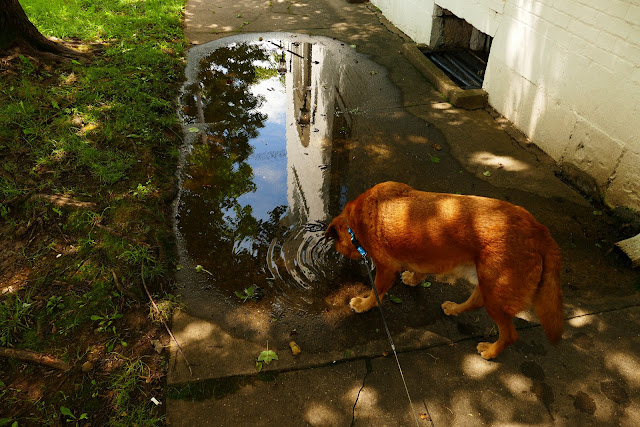 I have read the Natty Bumpo series by James Fenimore Cooper, The Last of the Mohicans is the most famous novel though I enjoyed the first novel called The Deerslayer very much. In the books set in Upstate New York where Cooperstown is named for the author, baseball fans please note, Natty Bumpo the tracker and woodsman has a plan to set out for the ungoverned western territories which he names as Kentucky funnily enough. By the last novel he makes it out to the true west, the plains and meets his destiny but that's another story. 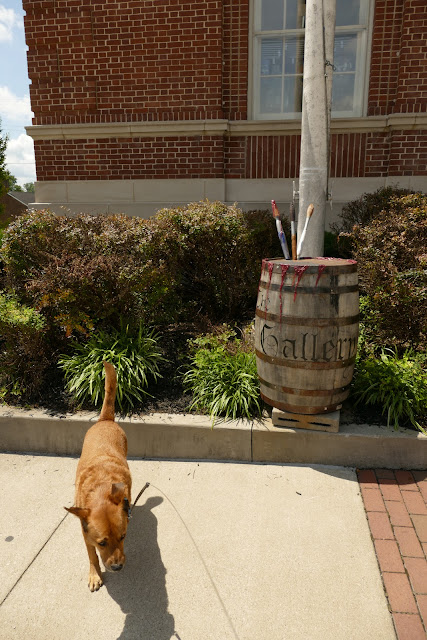 In modern life Bardstown is just a pretty face, not an adventure and I like it a lot. I cannot help now but think of the Iraq veteran coming back to his hometown after his service and he is quoted on the Podcast as describing his feelings at having to return to that "shit hole" called Bardstown. Apparently the Most beautiful Small Town In America doesn't match up well to the frontline of an endless Middle Eastern War. 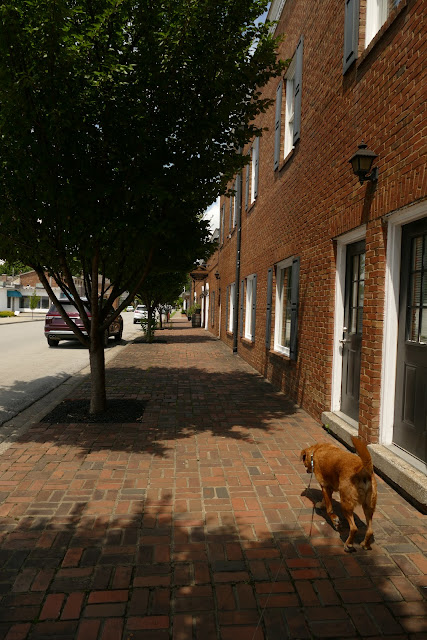 All I can say is it did not give that impression to me and I was never in an Iraqi foxhole. Your experience may vary. It has for other people.
Posted by Conchscooter at 1:00 AM

Im sure all small towns all over the world have their checkered past,human kind being what it is. If they dont, trouble will find them from outside. I am happy that y'all are having fun traveling. Your talk of shipping the van to Europe really interests me. Sounds like a great plan! Dont know if I would be able to do that due to health but we will see. I did retire at 62 and I am glad I did. Got started early on rving and enjoyed every minute of it. Safe and pleasant travels to you! Give Rusty a scratch behind the ear from me! lol

Beauty IS as beauty DOES.

Next time through Kentucky, if the virus ever allows, stop at Berea. There is an arts center/visitor center at a main exit by the Interstate. In town is a college that doesn't charge tuition and specializes in arts. There are lots of little craft/art shops. Also, a lovely old inn that serves a very nice meal. Don't have to stay there to partake.

We also enjoyed Shaker Village on one trip.

A little off topic:

Going back a few posts to where you discussed the Berkey Water filter, do you use the fluoride filters in your unit?

The US is one of the very few countries in the world that puts fluoride in its drinking water and toothpaste. Fluoride which was originally used as a rat poison until someone came up with the idea that it prevents cavities and needed to be added to our water supply. Toothpaste that uses fluoride has a warning printed on it cautioning you not to swallow the toothpaste while brushing.

Research it and draw your own conclusions.