I posted some of my pictures from this Harvest Host in LeRoy Michigan called Harvest Village. I have the habit, like it or not, of waking up early. Rusty likes it while at home, however traveling by van tires him and he hasn't been as eager to meet me on the trail at dawn... 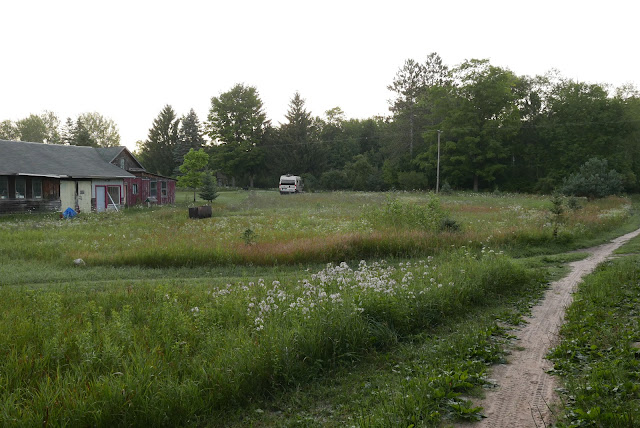 Its been a great vacation and finally I really do think we can do this van life thing long term....how long? As long as it's fun which is a quotation much to my surprise from the Pardeys, cruising sailors from half a century ago who sold themselves so well on their small wooden boat they made a living from it. 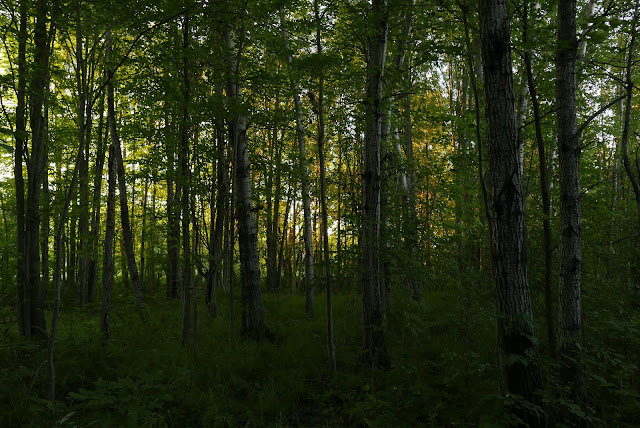 When I took these pictures in central Michigan we were about to start back to Key West which was busy ignoring me while trying to avoid a small determined hurricane, run a three candidate mayoral election while counting sick and dead from the coronavirus epidemic in the Keys.  1400 infected and eleven dead at last count. 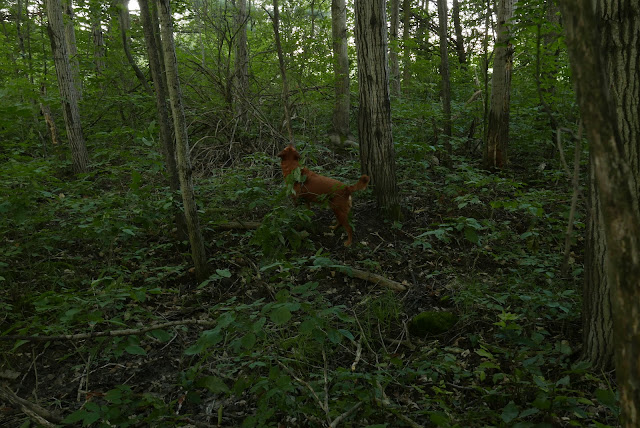 I was under orders to protect the farm's sheep so Rusty was leashed but the sunrise was lovely and very welcome in 54 degrees. 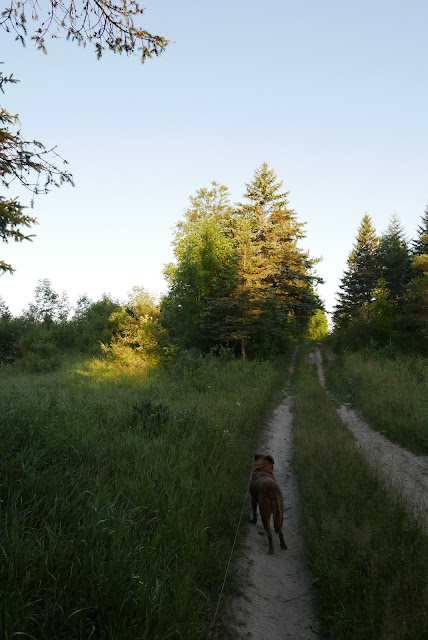 Forgive me my enthusiasm but it was fun to see the light from a new angle. I wasn't even close to sweating and the grass was dew covered and bright gold in the low angle light. 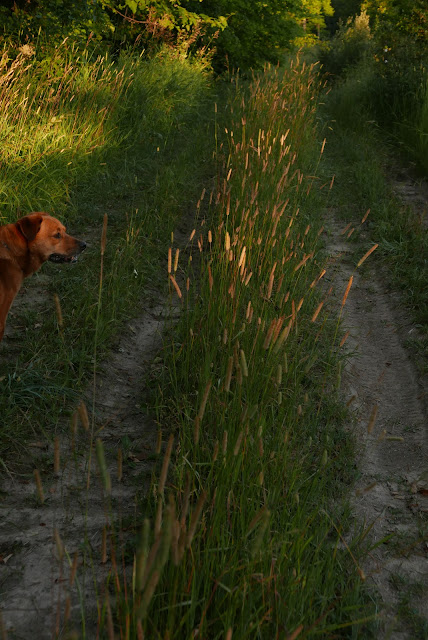 Not a mangrove in sight. But this time I was ready for the evil early morning dew and I had my Crocs on, no sneakers to soak, no socks to ruin, I was ready for Michigan's wilderness, I thought. The photography took a dive at that point as Rusty found a scent that very much appealed to him. Nose down he was off into the undergrowth. Let's not forget my orders were to keep  him on a leash so I was along for the ride. I can say with some conviction that red mangroves are much harder to negotiate than this stuff but at the same time it wasn't easy. Rusty was very patient as he followed the trail of some exciting wild creature, hopefully not a large bear with a family, and I trailed along 16 feet behind pulling aside branches and bending saplings. We found a field with wet grass that came up to my knees and made them cold and wet but I was dragged into the wet whether I liked it or not.  This giving my dog his time to exercise went on for half an hour until he found our way back to the road. I got two splinters and a bloody scratch. Rusty got one tick on his throat. Luckily our ordeal was all organic so that was something. 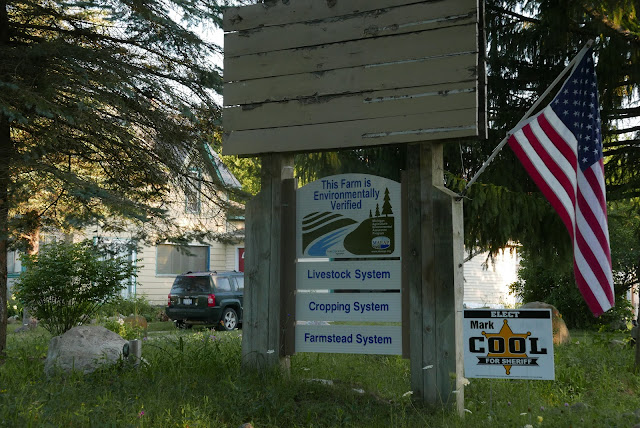 Mark Cool is challenging the Sheriff of this county in the middle of nowhere. I know nothing but he has my vote based on his name alone. Probably not a criterion I would suggest to any nearby voters but I was in a. good mood so it seemed a good idea at the time. 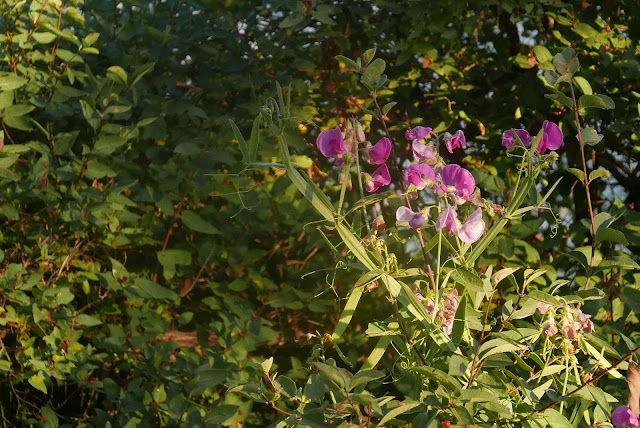 There is a lot of stuff going on along these back roads. In a country where TV dinners and pizza were staples of earlier generations there is a giant movement of small businesses offering us food that is good for us and tastes good and hearkens back to locally produced days. Don't get me wrong as I love Mac and Cheese as any red blooded American should, but fresh farm eggs? Home grown zucchini? No contest. 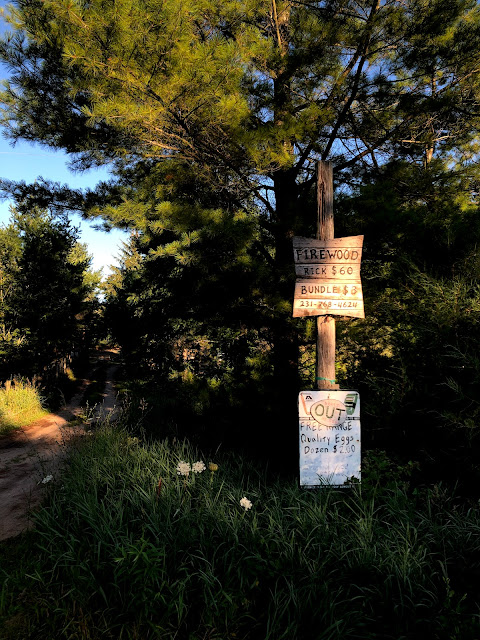 As much as I love the tropics with coconuts and astonishing sunsets and iguanas, I am ready to see more of this: 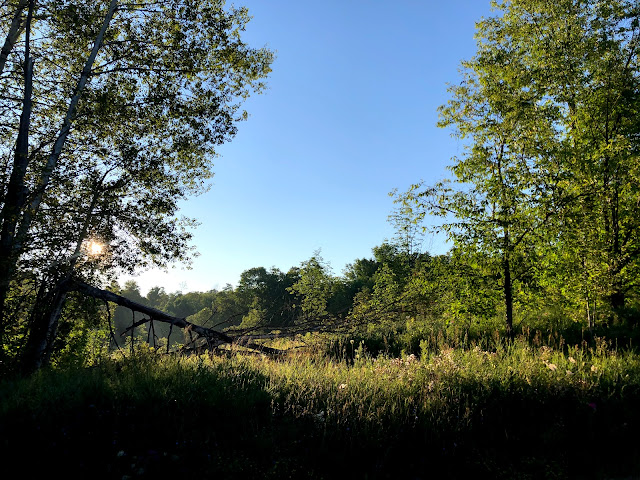 I am grateful to my wife who is an enthusiastic traveler and to my dog who loves me enough to try new things with reasonably good grace. I'm grateful to people who keep these scenes alive: 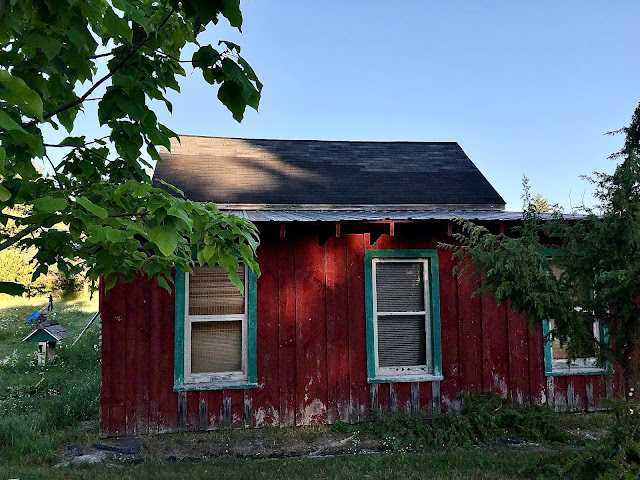 Rusty loves long grass and he's quite fond of short grass too even though he puts up with pea rock at home. He'll happily sit outside the Promaster watching the world go by wherever we stop. We pause for lunch, throw the side door open and immediately he goes out and lays down and watches the world with his nose twitching. 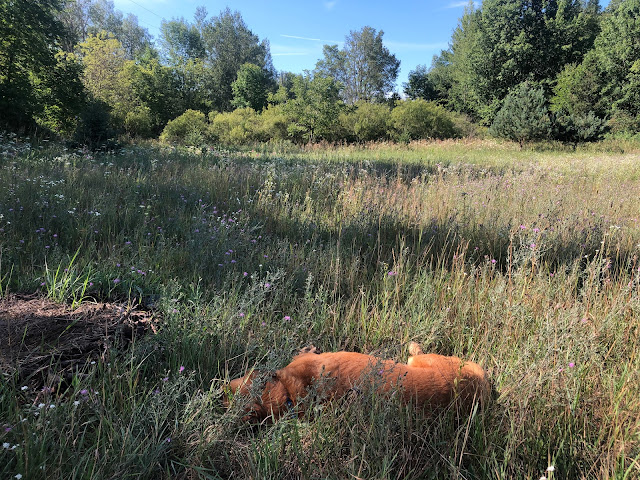 We really do get these views out the back of our van even though we don't fit any known description for van lifers. At the push of a button the couches come together and of an evening I set out the sheets (my job while she cooks) and we have a queen sized bed. I am having a blast. 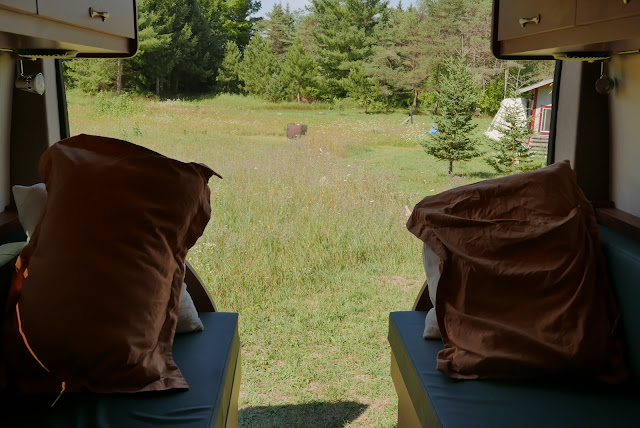 After I came out of the hospital I could nearly manage three hours in the passenger seat of the car when my wife drove me to doctor's appointments in Miami. It was so tough for me, not to mention my wife handling my wheelchair, we spent the night in a hotel. I was I admit freaked out at the thought I might never be strong enough to do a road trip.  I was the guy who rode a scooter to Buffalo in 32 hours from Key West! But just like my physical therapist said I got my strength back as I learned to walk again. Nowadays I find driving the van for twelve hours is no problem at all.I read the comments on the Promaster Forum and people complain all the time about the seats and seating position. Mine works great. 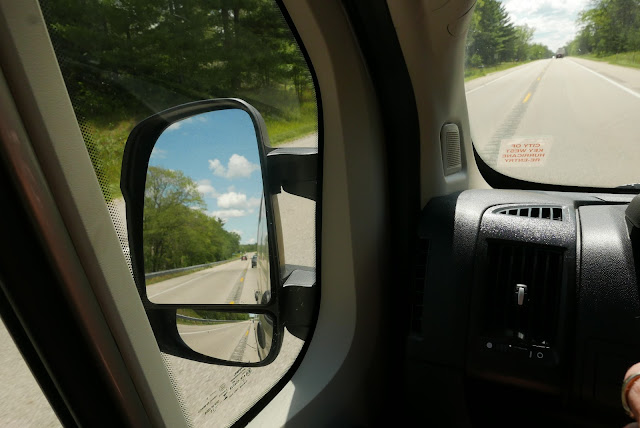 Look closely at the picture above, a car hovering to try to find the nerve to pass while up front there is hardly. vehicle in sight. There's a lot of that in Michigan. I miss the  long passing zones, the thick woods and the farms and fields.  What is wrong with me? 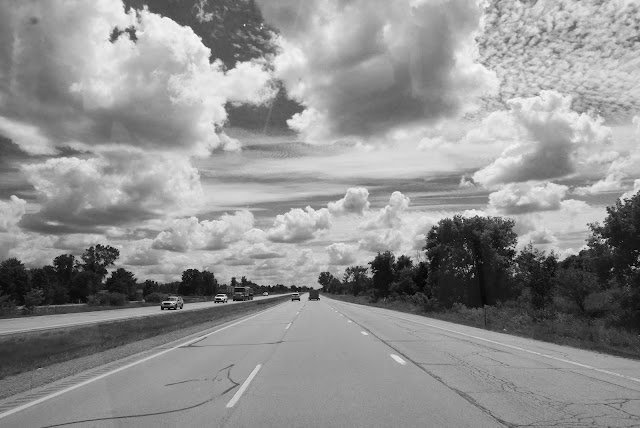 Posted by Conchscooter at 1:00 AM

"... What is wrong with me?" Well, I hate to tell you this, but I think you may have become an RVer. Sorry- no known cure.

I think you are going to very much like New England, as long as you don't try and hurry. Route 1 and 1a is the answer.

I love reading your perspectives on Michigan. Michigan summers are the best but winters leave much to be desired. Save travels!

I wondered when you left here if you would find van travel to your long distance liking. Glad it is working out. There is lots of our country to explore. And beyond.

We did some long distance driving trips that were great. Bob can't handle that any more. Do it while you can!

I think the only known cure for not hurrying is retirement. Three weeks has felt rushed. One day I’d like to sit out a northern winter to see what its like. Not in a van and no while working.

A three-week trip would seem like rushing. There have been several times where we've spent three weeks in a single area. The key thing to remember is that after you retire, you are just choosing a nomadic lifestyle and you are not on vacation…

If you are not from the north, several days or even more can let you still like winter in the north. It's after 3 weeks straight of a winter slog, that it turns against you. Probably like a few days or even weeks in Key West summer heat is still fun, until.....

I fear I like winter as a concept more than a reality. We shall see.