A colleague of mine was quite taken by the title of "Beaver Moon" apparently given to the full moon in November when once upon a time beaver hunting was a popular event. The way the world moves it has taken on a  whole new and not necessarily appealing connotation. Rusty on the other hand looked mighty regal as we watched the sun come up over Mallory Square with the beaver moon fixing to set over Sunset Key. 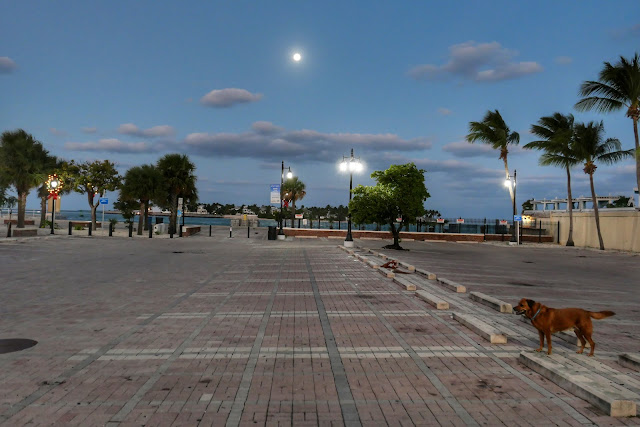 The mention of beaver hunting put me in mind of trappers and wilderness and the call of the wild in northern places where people continue to be active even when snow is on the ground and water turns solid. Not my kind of environment. If it were my environment spending two decades earning a  pension in Key West would be rather stupid, now wouldn't it? Why live in the tropics if you crave snow on the ground I say. So when my sister in law said she wanted to give us down jackets for Christmas I started over thinking as usual. A generous gesture no doubt but it did rather bring out into the open a  future that most likely will involve cold weather and the chance of frostbite and polar bears and stuff like that. 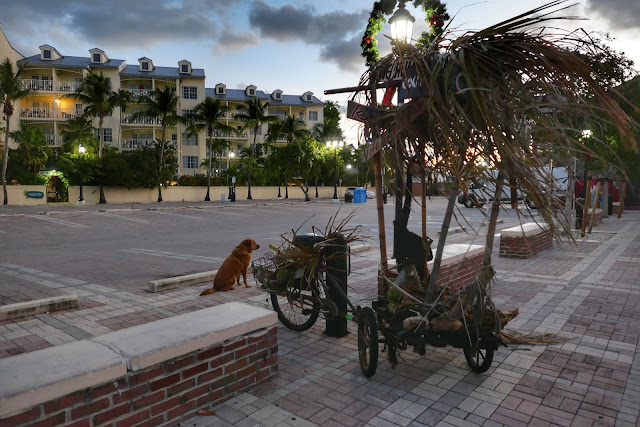 My sister in law lives near Asheville where my wife and I have before now visited her family for Christmas, which in the northern hemisphere is that time of year when it gets cold. To my mind the best thing about living in Australia for all its robust masculinity must be that they have Christmas in mid summer. Absolutely brilliant. I meanwhile celebrate forced travel in mid winter and Asheville in December can be positively arctic. Oh they tell us, it's not usually this cold as we seek cover from horizontal sleet and streets like ice rinks. But it always is. One memorable Asheville Christmas we struggled into the house from the car parked outside and even Emma the Labrador was put off by the 12 degree night and howling wind. We stepped inside shivering. The family looked at us in puzzlement. Why were we not wearing our winter clothes they asked, as though visiting Asheville in December in short sleeves jeans and thin sweaters was the behavior expected of unaccompanied imbeciles. All we could say in our defense was this is as warm as our clothing gets.  Looks of disbelief all round: the morons from key West are back. 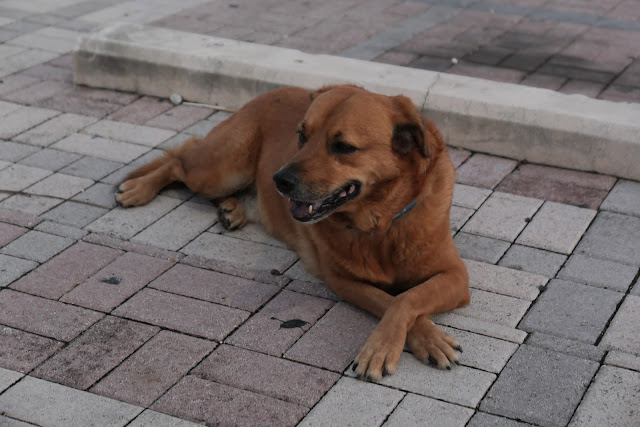 So when I am faced with the prospect of actually owning a proper down puffy winter jacket like they wear on ski slopes and similar abominations I find myself asking what have I let myself in for? My wife has been exploring out of the way nooks and crannies in the van to hold our not-immediately-in-use clothing which I hope will include storing the puffy down jackets most of the time. On the other hand I do have to come to grips with the fact that the pursuit of knowledge and experience means there will be days, several I dare say, of being cold and wearing socks even when I don't feel like it. 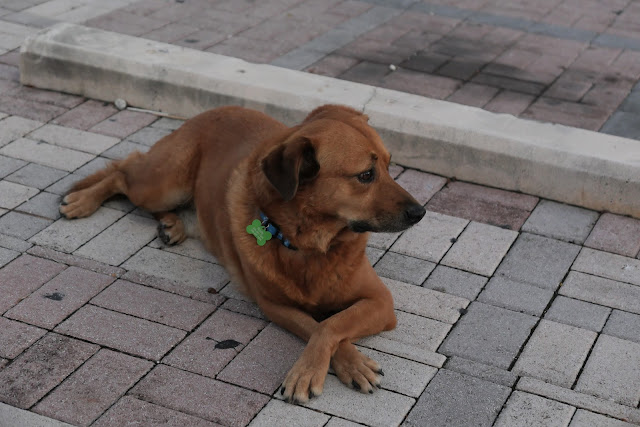 When we decided to get married my wife thought the person to tell was her older sister as their parents were both dead by then and it turned out the Asheville-lover was earning money to put her boys through university by working as a general practitioner in Fargo North Dakota. Her mild mannered and slightly vague husband had got a sound job teaching in neighboring Morehead Minnesota and they did their ten years penance living and working astride the Red River a stone's catapult from Canada, also known as The Frozen North. As nervous as I was I put up no resistance when my beloved suggested we go and break the news at Christmas that year. 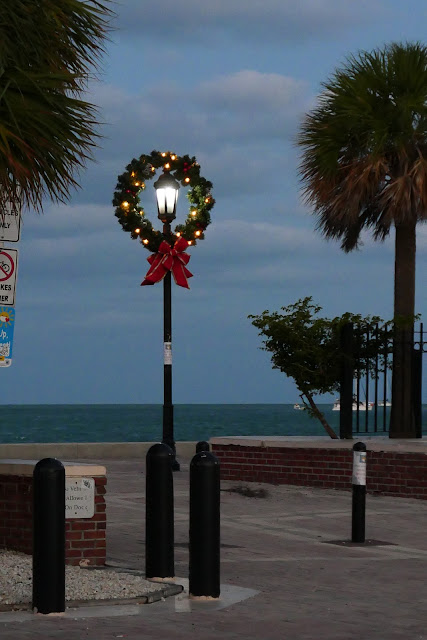 I had no idea what to expect when the airplane landed in Minnesota and even though I was then living in frigid wet coastal California my tropical heart was overwhelmed by the icicles in the air and snow banks taller than the car. It was a peculiar visit not least because the news came as no surprise and everyone worked hard to make the weirdo feel at home. Which was an uphill row to hoe considering I watched in amazement as they took the hair dryer outside for a walk on a very long extension cord the next morning and used it to defrost the car door lock. This was not normal and I wanted no part of it. I took the dog for a walk in an effort to experience the familiar in a new setting. That was a bad idea. 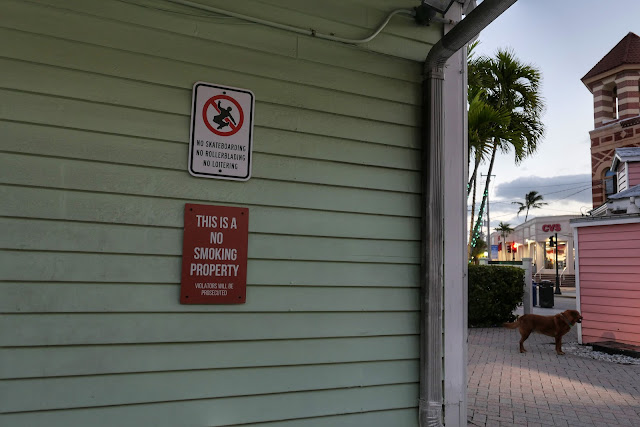 I ended up wading through waist deep snow walking on water that was supposed to be the Red River dividing the two states. All I saw as I struggled with a leashed husky having a great day was a field of snow between two rows of twig like saplings. A sylvan place in summer no doubt but in December (the accursed month!) it felt like the North Pole. Then we took off for a wedding in Bismarck where friends of the family were to be joined in matrimony. The drive across North Dakota was a vision of what my hell will look like in the fullness of time, as the heat and fire promised by Medieval visionaries sounds balmy compared to the plains of the Dakotas under wind driven snow. I was sure the four wheel drive Toyota van was going to stop and I was going to die like Robert Falcon Scott eleven miles from safety. 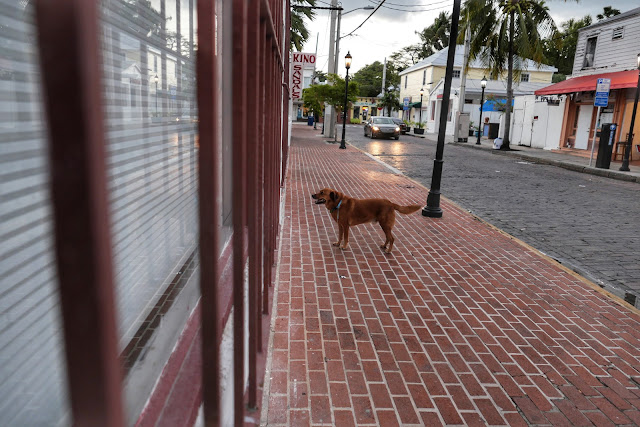 My fiancé and I were not, thank God, part of the wedding party and we stayed behind at the hotel while they went off to do the honors. The hotel was something out of Alice in Wonderland with the central courtyard roofed over like a giant skylight above the swimming pool. The pool was surrounded - I kid you not - by AstroTurf and beach umbrellas and Dakotans behaving as though they were at the ocean's edge in July. I could not believe what I was seeing and I wandered to the windows and looked out at an arctic landscape of white lumps and deep black wet tracks cutting  through the winter Christmas card landscape. Santa Claus on a sled couldn't have surprised me after the pool party going on at the hotel beachfront downstairs.  The weird illusion of summer carried on the next morning when we stopped for gas on our way out of Bismarck. The sun was shining and the sky was blue but the temperature was minus 20 in American degrees. I volunteered to pump gas as I saw people in their shirt sleeves enjoying the sunshine. Can't be that bad I thought. My leather jacket froze to my shoulders like armor and my jeans felt like ice tubes on my legs. I couldn't breathe the air was so cold. I got back in the Toyota Siena and after I thawed out later the allure of bison in a field alongside the highway could not get me out of the car on the drive back to Morehead. I looked at them through glass and felt bad for their frozen predicament. 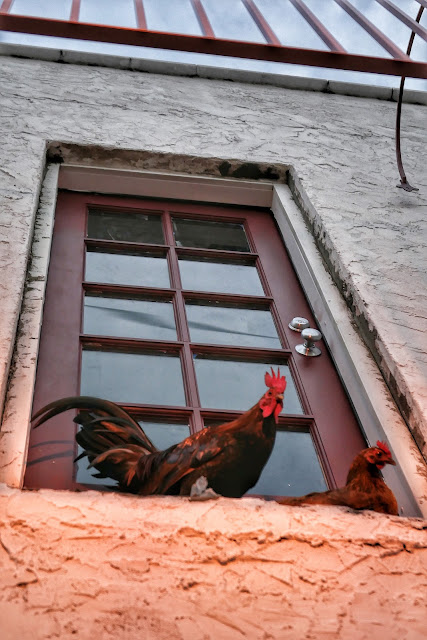 Our first serious cold front of the winter has lowered temperatures to 62 degrees, a subject of much mirth by real men who have sailed alone around Cape Horn with no source of onboard heat. Webb notes that temperatures in South Carolina are twenty degrees lower and he is twice as old as me and his cheerful tone dismisses me as a crank and a cold weather coward. He is correct on both counts. My idea of a winter sport is standing on Duval Street watching other people run around town in their winter underwear. This is my kind of December. 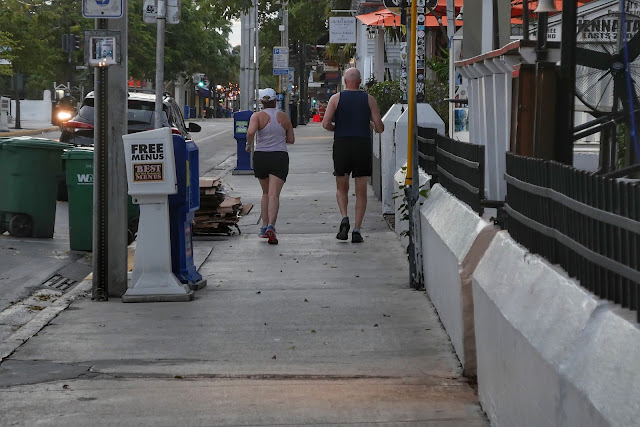 I spent my last day off enjoying a brisk sunny afternoon on the deck with a book and a cup of tea slightly chilled in the breeze but enjoying the break from summer's humidity that had persisted far too long. The end of hurricane season was celebrated in muted pandemic fashion on the last day of November and that should close one of the weirdest and most active seasons anyone can remember. I wouldn't be surprised if warm waters in the Western Caribbean don't produce a December surprise as that has happened before but I hope I can safely say I have but one more hurricane season to live through before I retire. I have spent enough time over the years sitting in the police station waiting to be wiped out, thanks. 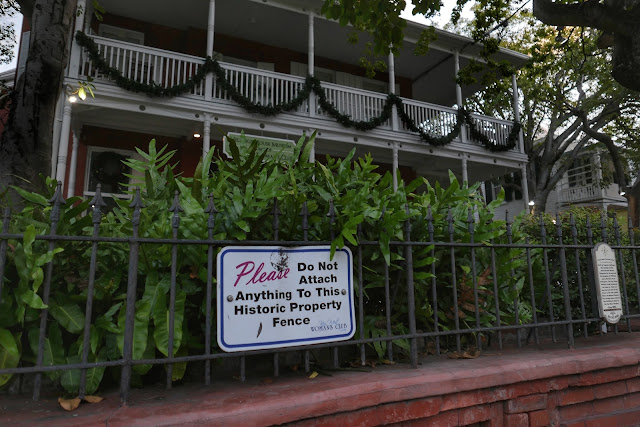 And there's the thing of it, with no obligations and nowhere to be my wife and I are planning to follow the seasons for a while.  She is nervous about facing Alaska's notorious insect population and I am hoping for a summer heatwave in the Arctic in 2022 but we are both going to make every effort to harden up and expect temperatures to fluctuate rather more than they do in the Keys. If we don't our adventures will be crippled by cold which would be absurd. I'd like to drink a  toast one day in Patagonia to Webb Chiles, first American to sail alone around Cape Horn. I plan to do it actually in Tierra del Fuego, but in the comfort of a heated, windproof van securely anchored on terra firma. 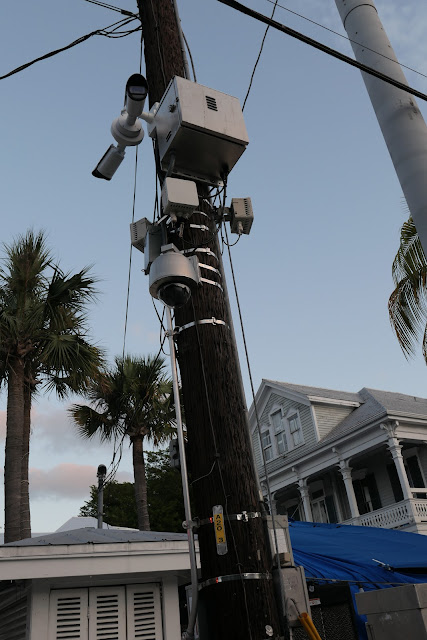 I am a creature of nostalgia and I know I will miss bright sunny winter days and this past week is what I will look forward to returning to after the van travels are done. Things are changing here and I wonder how Key West will look in the course of the next decade. Already we have closed circuit cameras on Duval (above) and the mayor is now pushing history as a tourist draw, which would mark a change in the city's income stream compared to the last fifty years. Fewer artists and eccentrics I fear and more conformity and disapproval. 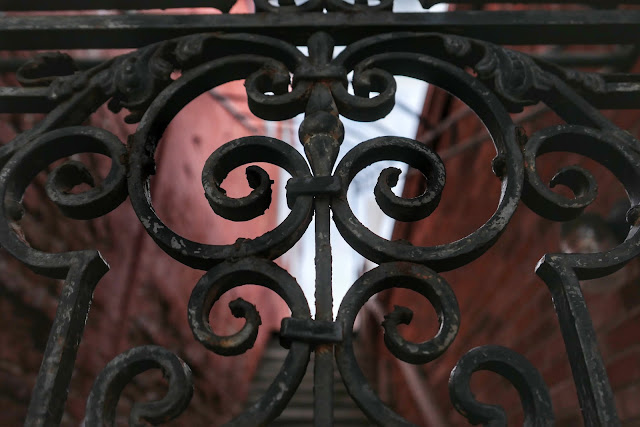 Key West will change and I too must change. I am going to embrace puffy down jackets and in a couple of weeks we are going to take off for a week and explore cool temperatures and van life for a few days in North Florida. We shall rejoice in socks,  we will learn how to heat the van, we will make full use of blankets and we will watch Rusty scoff at our trepidation and enjoy his fur coat the way it was meant to be used: in the cold. Oh brave new world, I embrace you.
Posted by Conchscooter at 12:00 AM

There are some things that need to be seen in winter...not too many... but some. I love my puffy coats/jackets. If they are appropriate for the temperatures you anticipate, get the ones that scrunch up and go in a pouch. They take hardly any space at all. Cuz Lynn

Heated underwear? Really? I shall talk to my wife. Sounds fantastic.
Cousin Lyn: Layne is in charge of negotiating with Geeta. I shall make sure she gets scrunchy stuff. As to what to look at I'm not at all sure. Snow is snow.

I'm baffled (doesn't take much!): how in the world do you steer that articulating trash-hauling tricycle?! I see no handlebars.