I look back over decades spent walking the mangroves and I find it astonishing I can count on the fingers of one hand the times I have met people on the trails. This thought came to me last night when a strange woman waved at me from her bicycle. You looked puzzled when i waved at you my neighbor said to me later when I was at home. I had dutifully waved back at the brightly dressed woman on a blue bicycle with no clue it was Paula. Silly me. 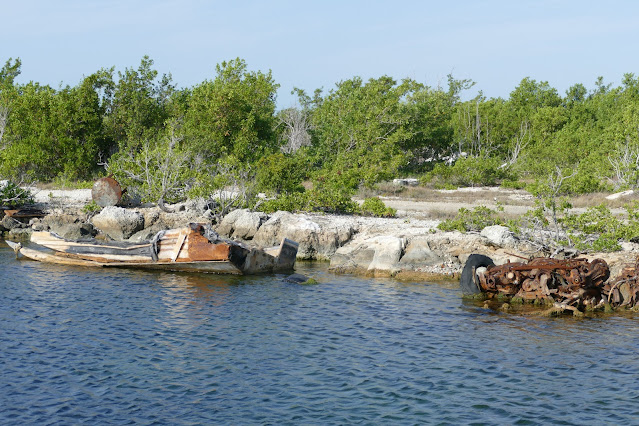 Then up the trail I was wandering looking at dead white buttonwood trunks when a flash of artificial white illuminated the trail. A man's shirt I thought to myself, the gender of the occupant given away perhaps by the size of the cloth through the bushes, accompanied by a yellow dot - a dog apparently. I looked back from my buttonwood exploration and no one was anywhere to be seen. The sight of Rusty and I convinced another walker that the trail was reserved for my pleasure. Good man, leave me alone. I don't know what the world is coming to when winter visitors think they can explore my trails at will. 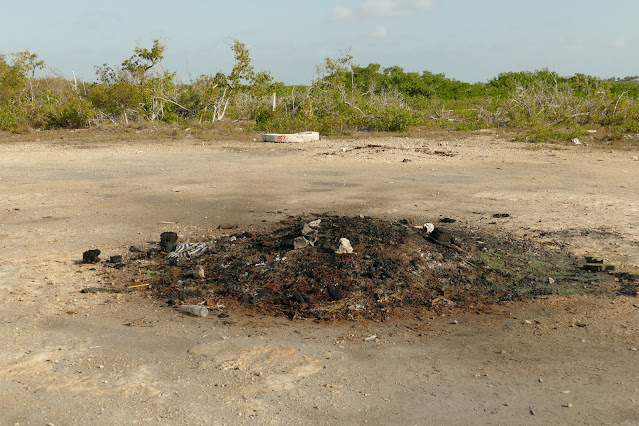 Clearly, in case my taste for irony escapes you these trails aren't mine at all and I don't drag trash out here to burn it. Nor do I spray paint abandoned cement pipes, nor do I stage them as a secluded paintball field but I do enjoy visiting from time to time. There is a sensation of abandonment out here, all these signs of chaos and urban guerillas chasing around the cement yet when Rusty and I come out to listen to the wind we are alone with the merest hint of traffic on Highway One a mile away across the mud and mangroves. 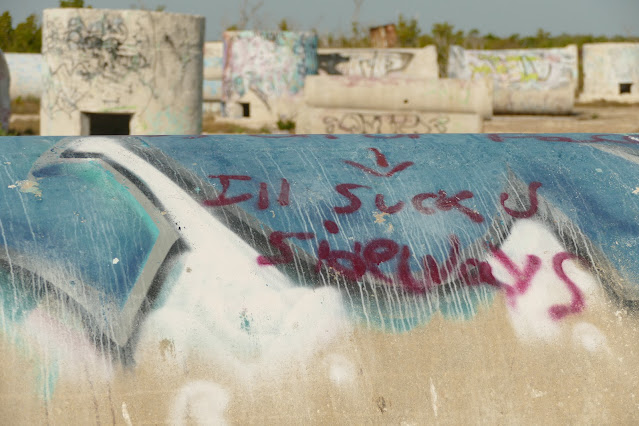 I don't really see the point of dragging spray cans out here to inscribe these big cement tubes in the middle of nowhere but I suppose art must have it's outlet, even if the art in question is nihilist and of dubious originality. 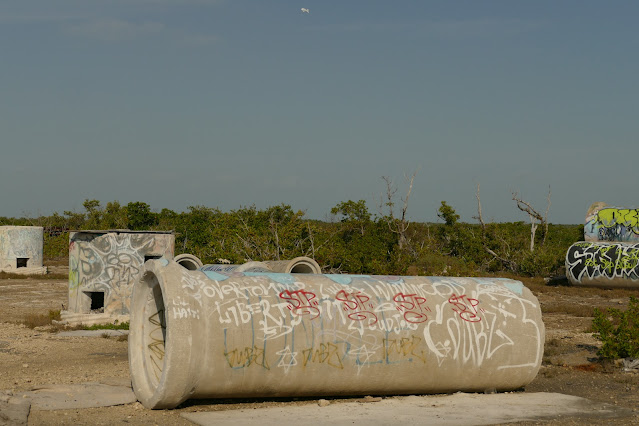 Rusty and i walk, he sniffs and I make pictures and leave no trace. I once did meet a bunch of all terrain vehicles out here, mud warriors trying to pretend they are in some vast expansive woodland filled with gnarly trails and then they cross paths with an old man in Crocs and a dog who watches them from the cover of mangroves they could never hope to penetrate. A wave and they were gone. Never seen again. 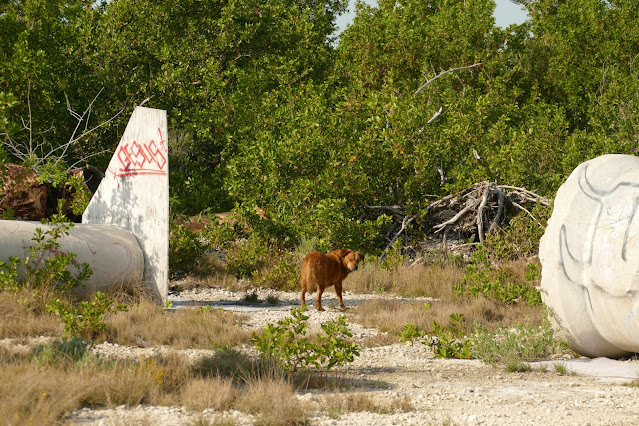 Last spring I saw a pick up truck parked at the entrance to the trail and indeed later I found his camp, clearly visible from the trail and he left behind a mess of pallets, household trash, bedding and the like. It was not a good time to be living in the mangroves with much rain and mosquitoes and I don't doubt he was was not a happy human playing at boy scouts but he should have had the common sense to clean up. Trash engenders ill feeling. 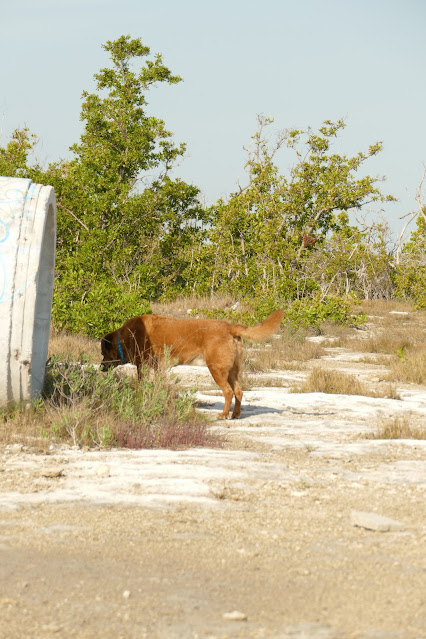 There was a time in the Keys as everywhere else, when these spaces were considered "wasted" if not dedicated to human use, so the best use was to dump crap for free among the mangroves. They didn't do things by halves and i have found old cars,  a Volkswagen bus, a school bus, numerous tires, a cement mixer and on and on. Including this old trailer with a  load of tiles of all things. Just dumped and left to rust and get covered in graffiti. 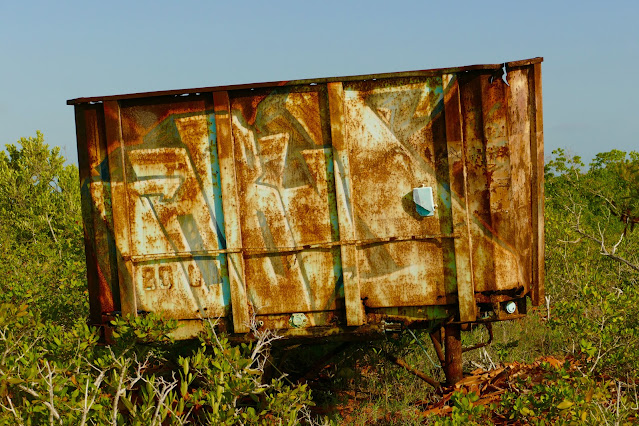 These areas were slated for development before attitudes changed. Developers bought the swamps, advertised vacation plots for sale to northerners stuck in snow storms and in an effort to make the uninhabitable useable they tried to suppress mosquitoes. You may remember the bat tower which was destroyed on Sugarloaf by Hurricane Irma. That was a natural mosquito killer plan developed early in the 20th century to have bats eat insects except they hated the neighborhood and left. 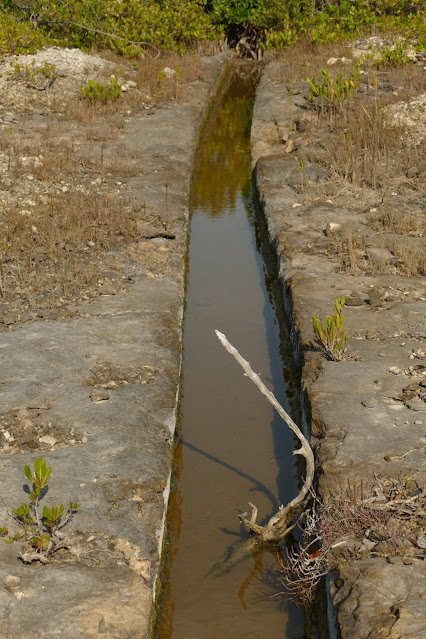 Here we have two pictures of gambusia trenches. You will find these all over the back country in the Keys. The bad news is you can trip in them and your fat Labrador can get stuck in them (I miss Cheyenne sometimes) and they are full of mud so when you pull her out you look like the survivor of a very  gruesome disaster. The good news is the rock chewed out of the ground to make them is piled alongside in low berms and if you get three feet up you suddenly get much better views...of flat green mangroves. The idea was to fill them with gambusia fish that eat mosquito larvae and hibernate in the mud in dry season. 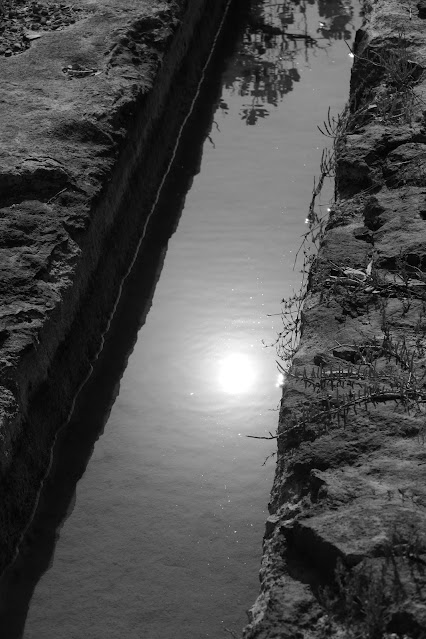 Grand fail. But the trenches are left  as are the berms and look what you can see if you are five foot six and suddenly elevated two extra feet. I told you the views here aren't really extraordinary if you expect the Grand Canyon or Yosemite. 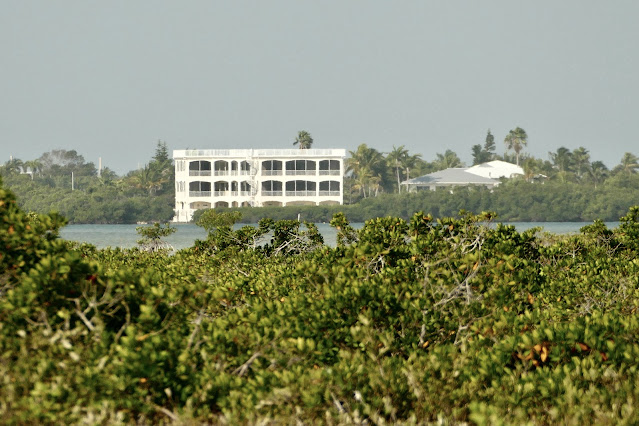 I was out walking one day a few years ago and I heard the sound of a motor purring through the bushes. Imagine my surprise when a gray Vespa 250 came bouncing round the corner. He was cheerfully negotiating the mud and rocks on his $6,000 scooter and we stopped and chatted for a second. He seemed surprised when I told him the trail didn't go anywhere and didn't change much. I rather admired his nerve; I have never gone blindly off road on my scooters in the mangroves. I really do enjoy walking! 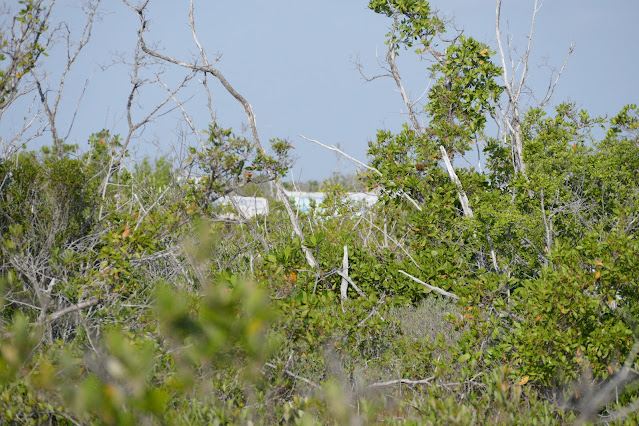 I saw Keys Energy improving the electrical lines on the hurricane resistant cement poles. Its a bot early in the year but already this winter we've had a trickle of people coming to the police station looking for hurricane re-entry stickers...my usual response is "Do you know something I don't, any storms coming?" Being prepared is a good thing but I find that sort of level of preparedness a little unnerving. I think this year I am going to evacuate if they will let me. I never have since 2004 and I think I'd like to try it especially as I have the van. I have to confess a week in the van in the Blue Ridge sounds a lot better at my advanced age than a week in the Keys with trash everywhere and no lights. My last hurricane season I hope. 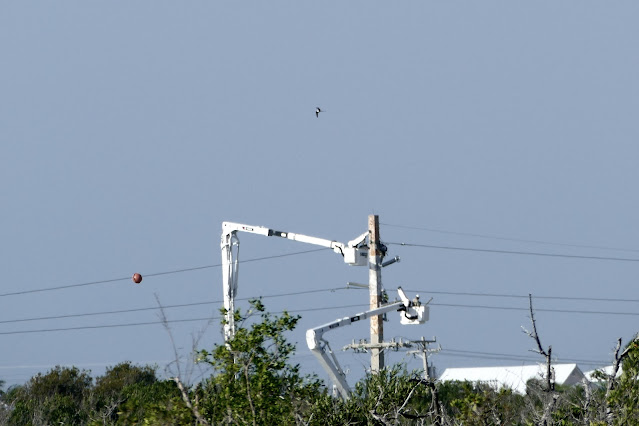 Never mind hurricanes, never mind the noisy busy world that awaits. Rusty needed to sniff and I needed to enjoy the moment. 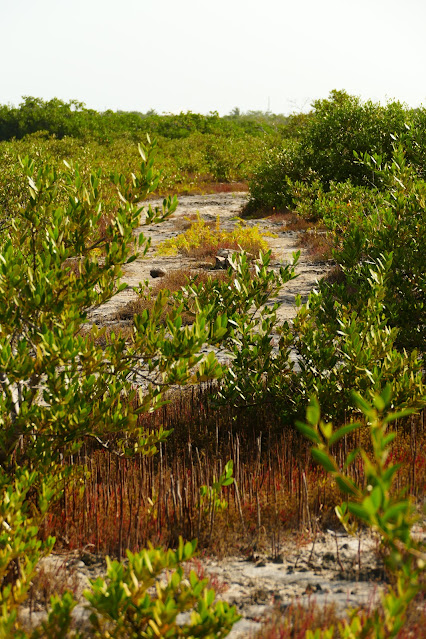 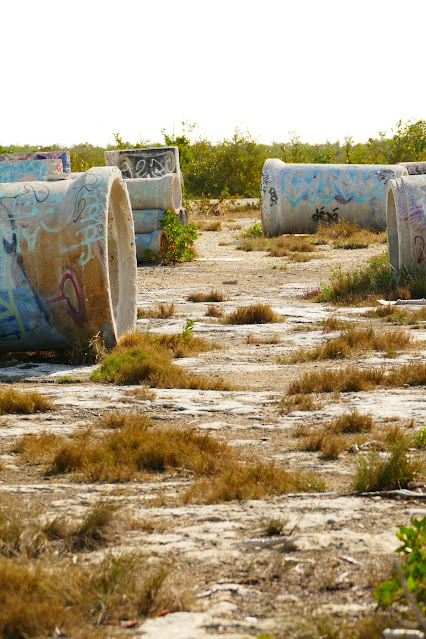 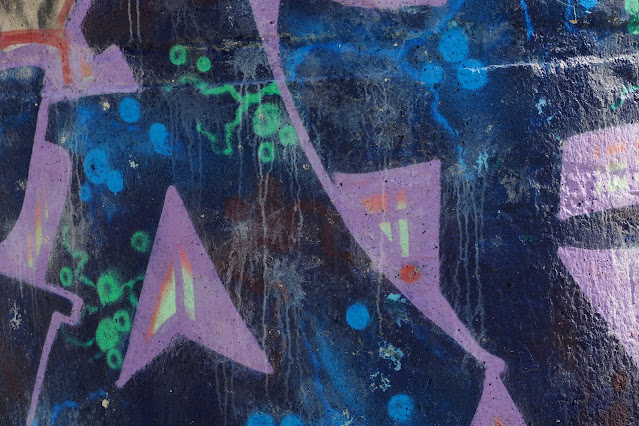 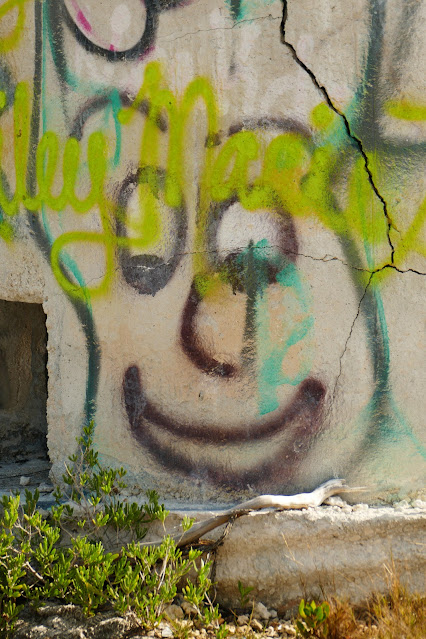 Some parts of the back country aren't trash and some aren't even marked by the passage of people, they are just patches of color and light. As the trails should be. 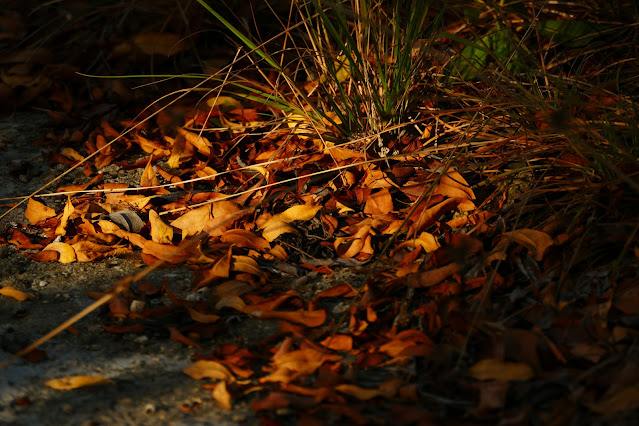 Blue ridge is a good escape,,,just be careful of the heavy rain if the storm goes north. Peace

I have noticed my sister in law gets drenched sometimes after the hurricanes pass us by. Nevertheless I'd take any amount of rain after the lack of water electricity fuel and abundance of trash after Hurricane Irma! That was a rough time.