Leaving Cuba after the storm cleared and we had finished exploring Punta Jutia we sailed once again for Key West and the next evening we dropped anchor behind Christmas Tree Island. The dogs got their walks immediately of course  and we slept secure ion the knowledge we had arrived, almost penniless, back in the US of A.  The next morning after another island walk we pulled up at the fuel dock at the city marina and called Customs to check us in. 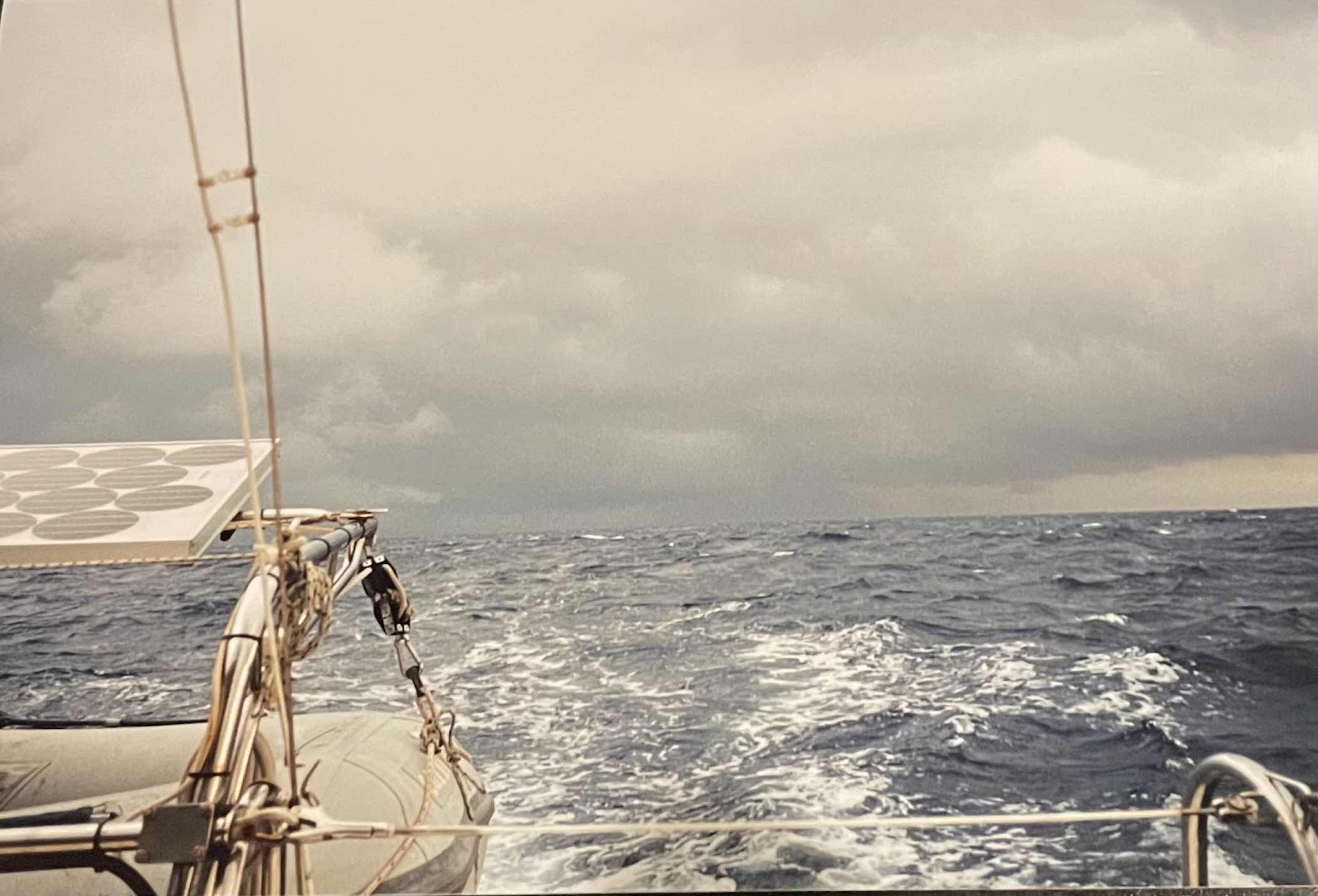 It was good to be back but we were still thinking about our crazy illegal time anchored off Cuba's north shore, as in this photo taken from the upper deck of a friendly Cuban boat anchored nearby avoiding the same storm. 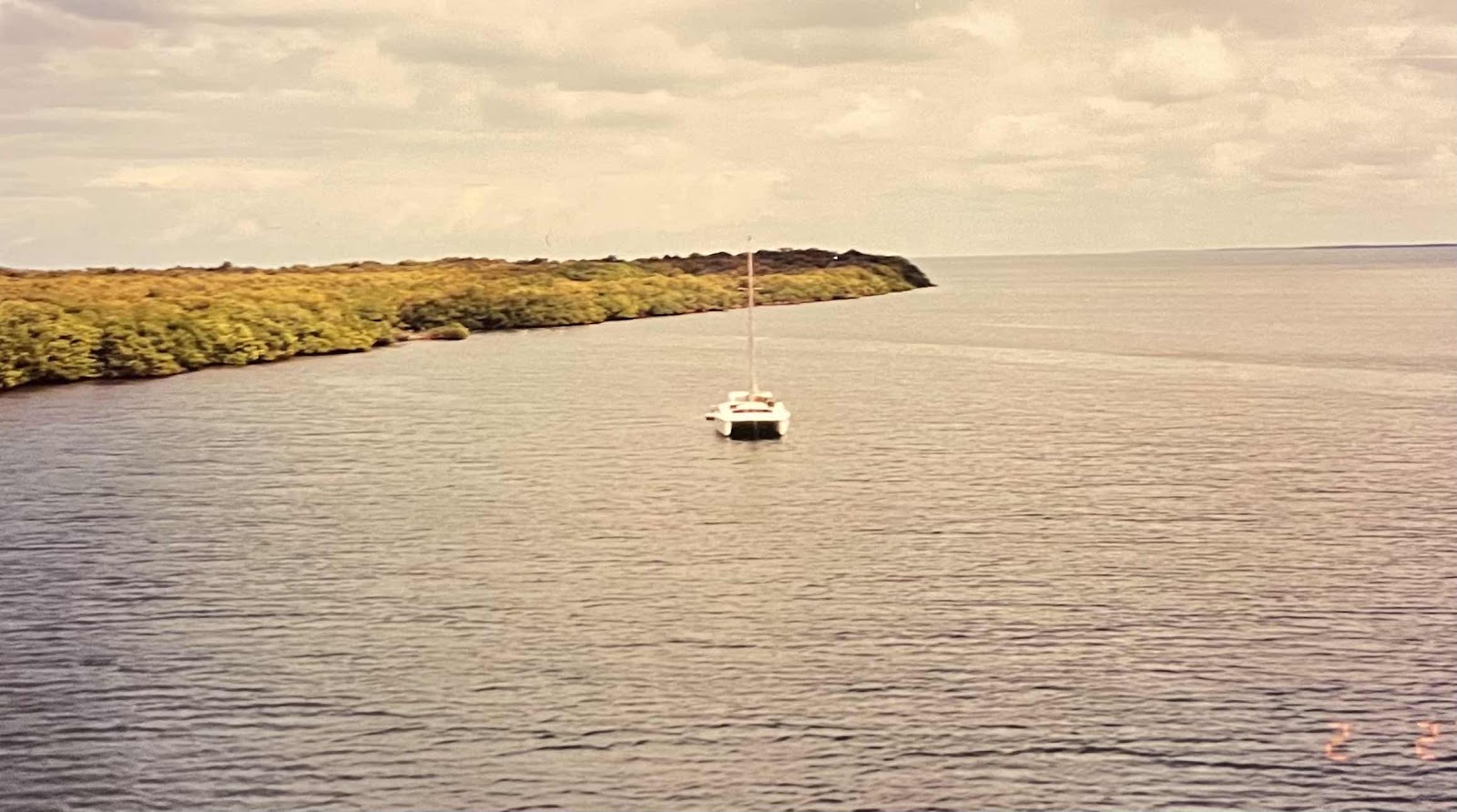 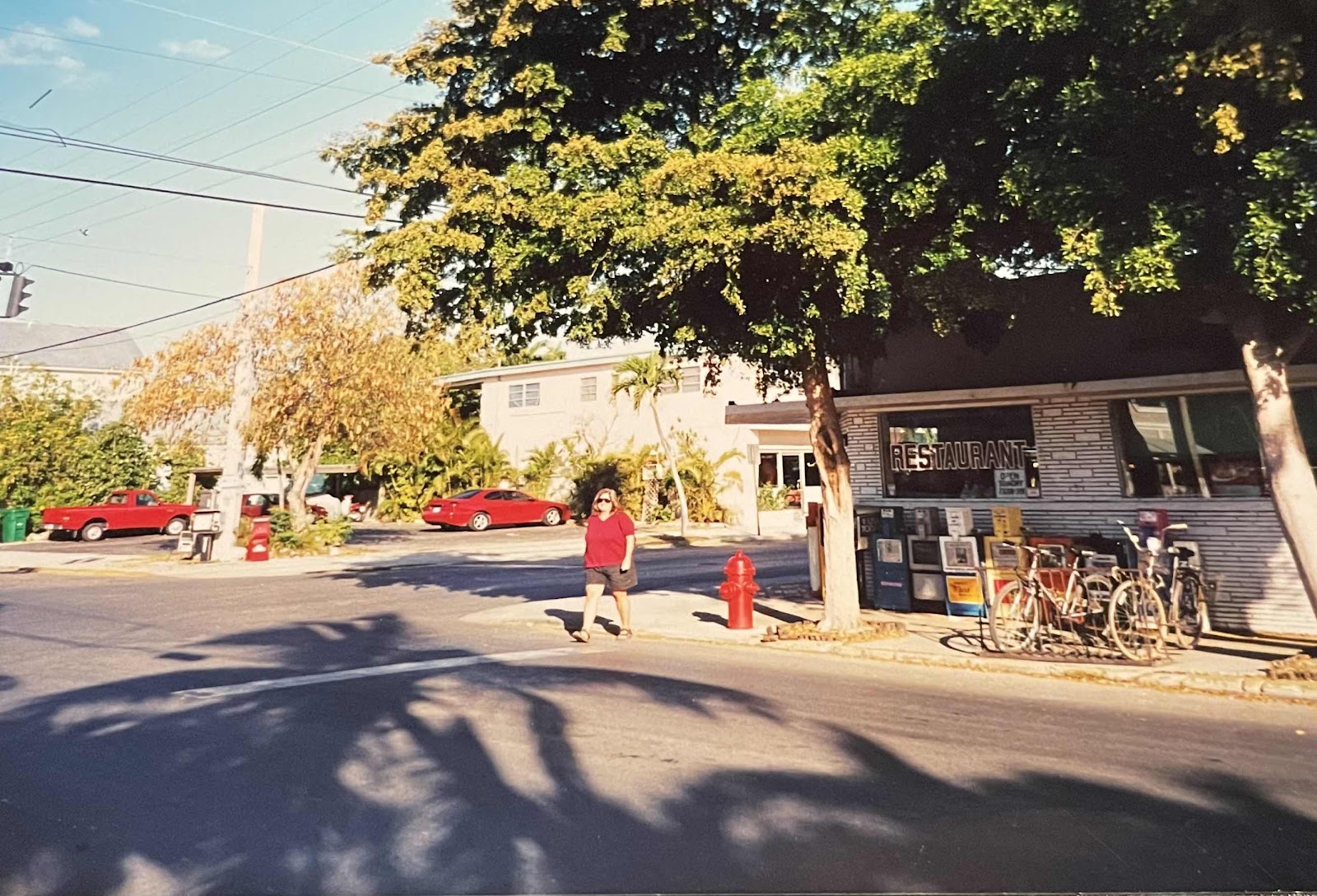 The thing I notice about our pictures of Key West was how little so much of it has changed in the past twenty years. We checked out houses and found a crappy upstairs studio for $185,000 making us think our boat might be best. We weren't even thinking of hurricane damage possible every summer at that point. 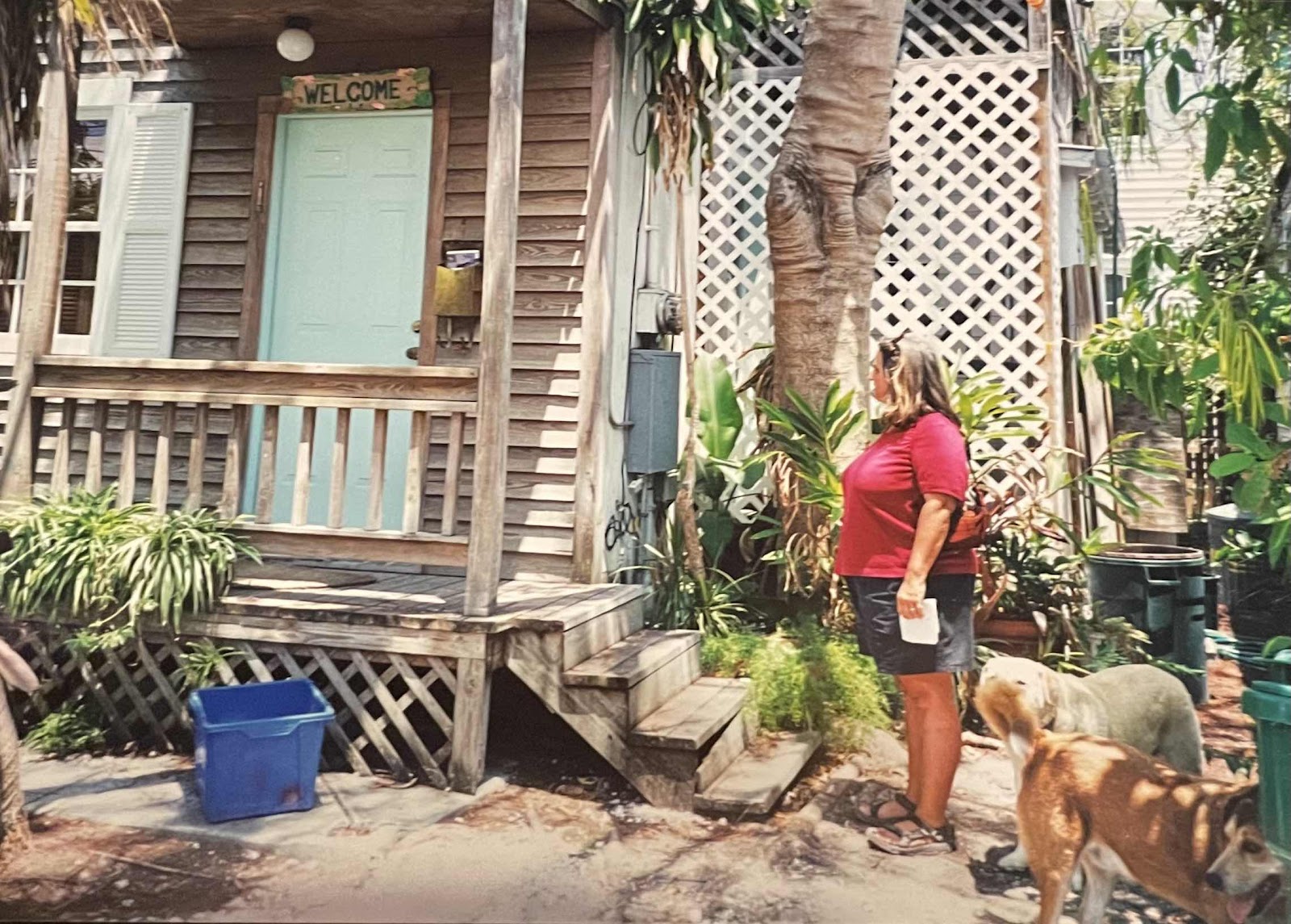 Curtis, Robert and his wife Nola greeted us and made us feel at home. I knew them from previous efforts to settle in Florida and at some point we figured we might want to join them. What happened was that Layne found her arthritis hurt much less in the tropical heat than in the cold damp of coastal California. The plan slowly formed that perhaps we should stay and settle in Key West. 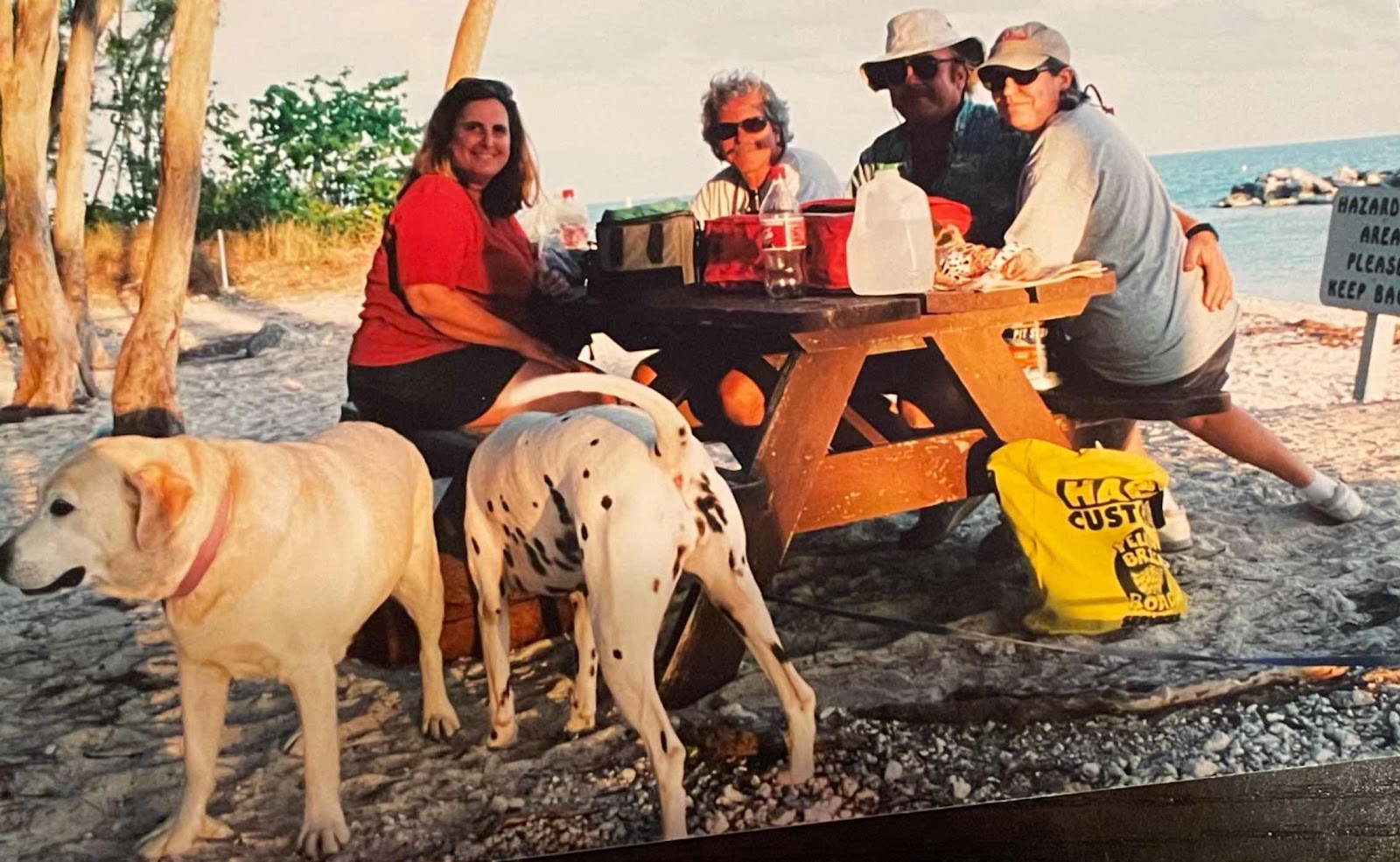 I still liked living on the water, photographed here rowing into Garrison Bight from the mooring Curt loaned us out by Rat Island. We surprised our friends by applying for work. Layne got hired as aJuvenile probation officer much to her surprise. In those days regular office jobs were easy to come by as work in bars and hotels paid a lot more but Layne wanted a pension. She was determined on that point. I got hired as about captain thanks to my license, earned in a. moment of madness and I turned my hobby into my job. That pension thing kept nagging which is how I ended up at the police department. We sold our California home and bought a house on Ramrod Key and there we were. A new life done and dusted. 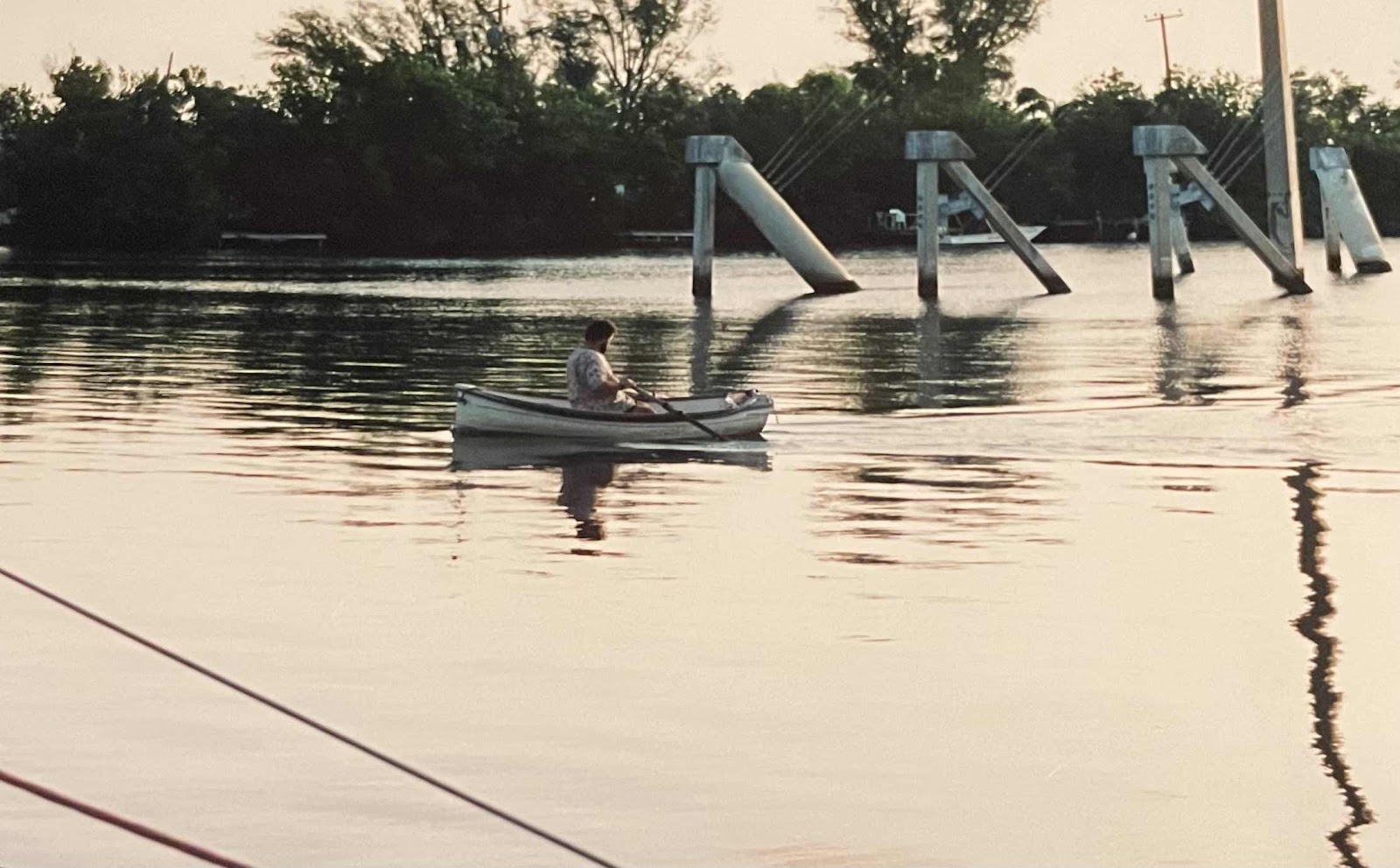 The dogs continued traveling with us as we moved between our old life in California and our new life in Florida. It took us a while to move what stuff we needed, to sell the boat and to move into a new life. 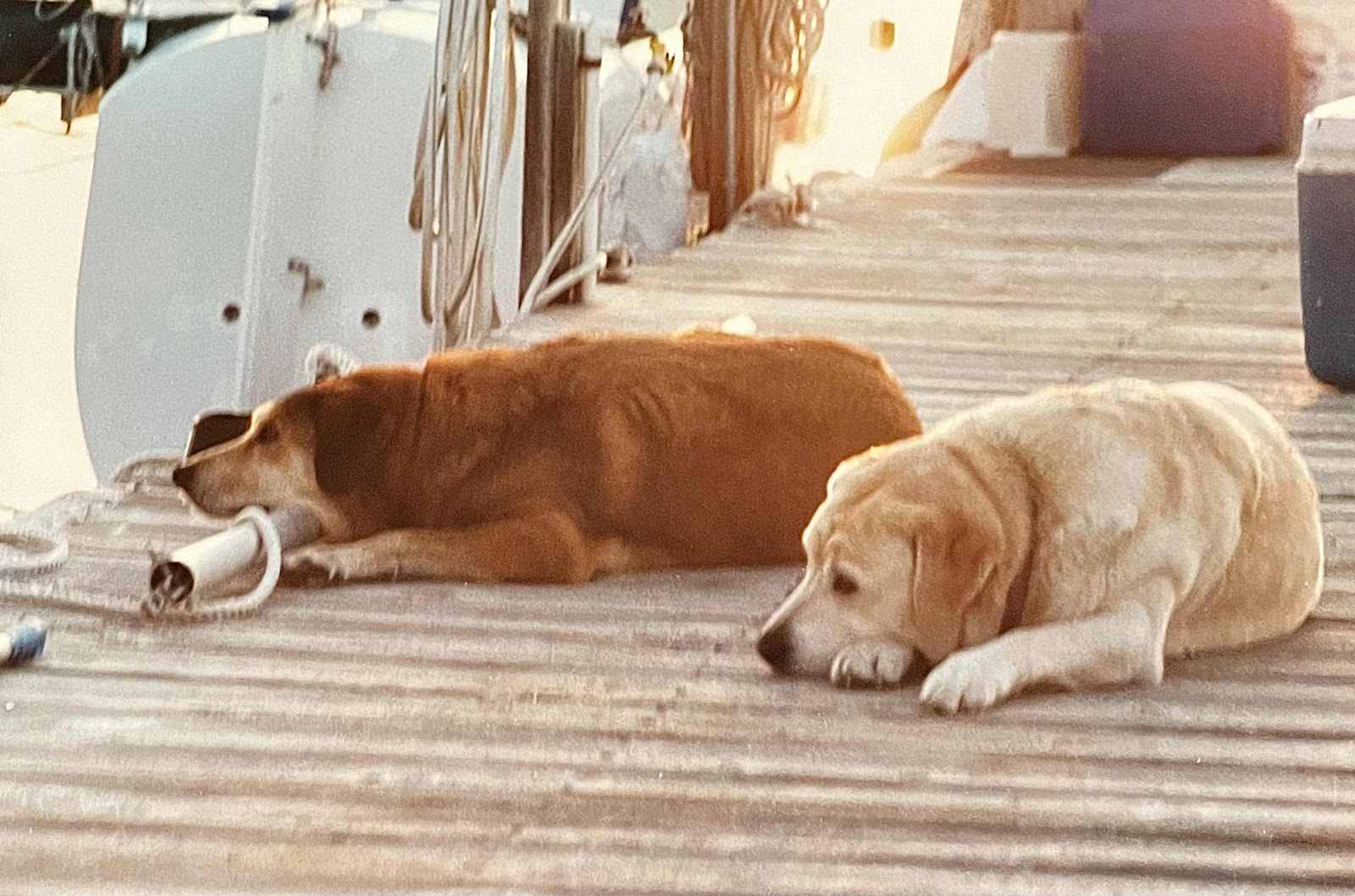 I took this picture on Grinnell near Five Brothers and I remember it well. I used to commute in this car to my job in San Jose and a friend kept it for us while we went sailing. It had no air conditioning but we drove it back and forth between Santa Cruz and Key West. 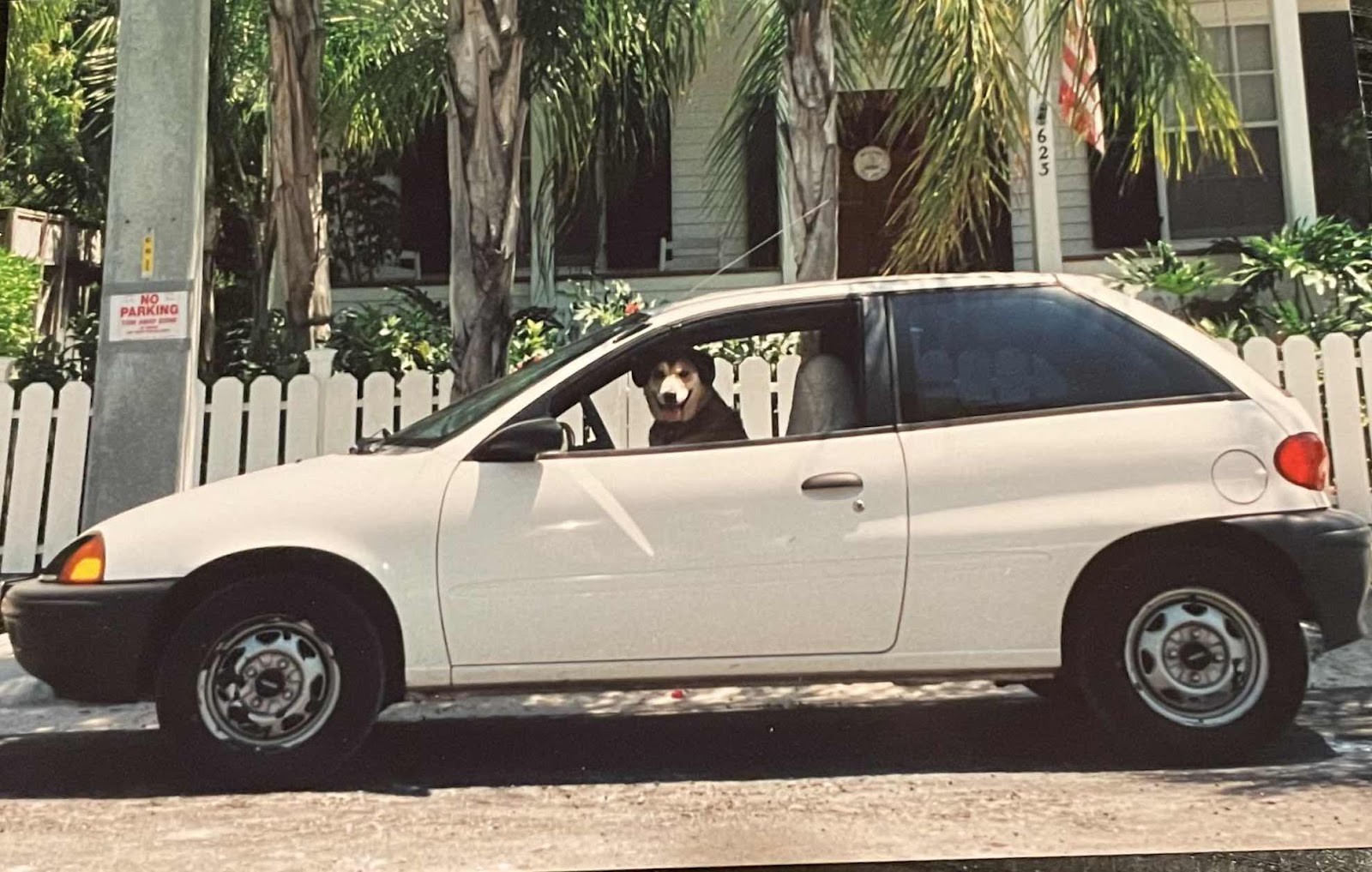 With two large dogs, alternating between the front and back seats. We humans shared the driving and the dogs switched between the back seat as one of us rested and the front seat keeping the driver company. We surprised a few people at our stops as the four of uncoiled from inside the little clown car. That Geo Metro 5 speed was a brilliant little machine. 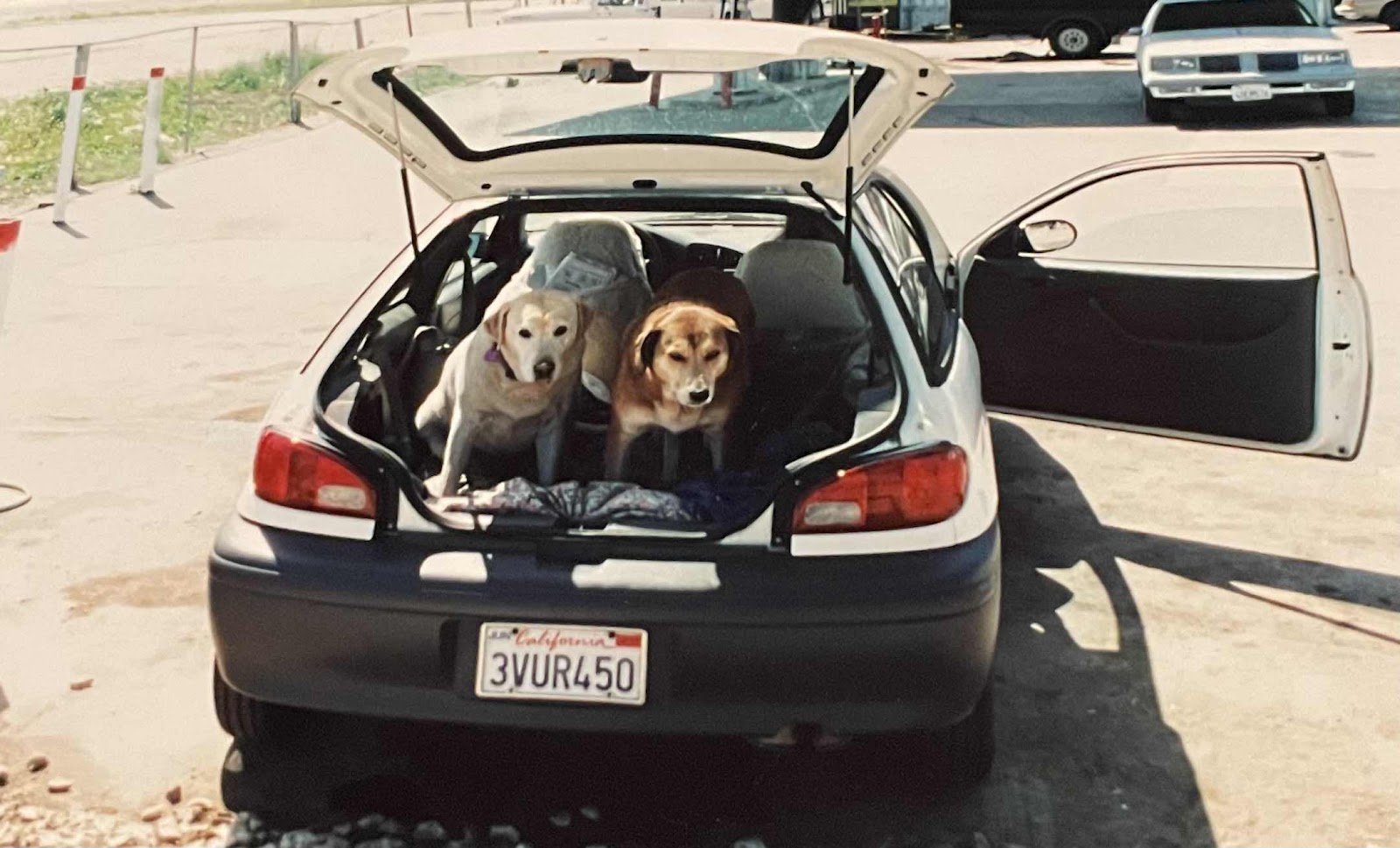 Back in the US the stops along I-10 were rather less scenic than the places we had explored from the boat. But we went back to walking and exploring as we could. 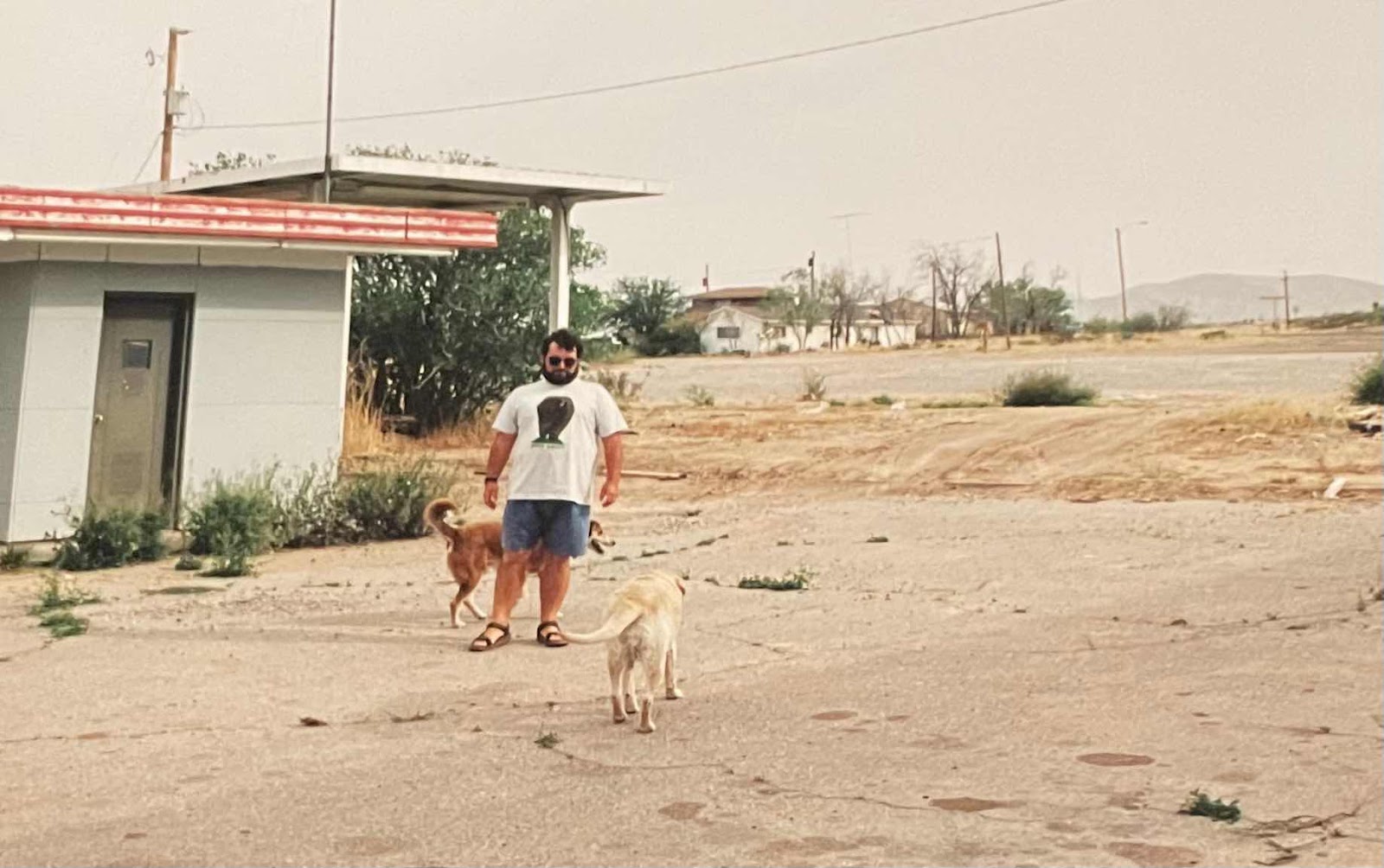 I am not looking forward to droning I-10 even now so I am planning a zig zag route to see friends in Arizona next month. We saw a lot of desert in those years. 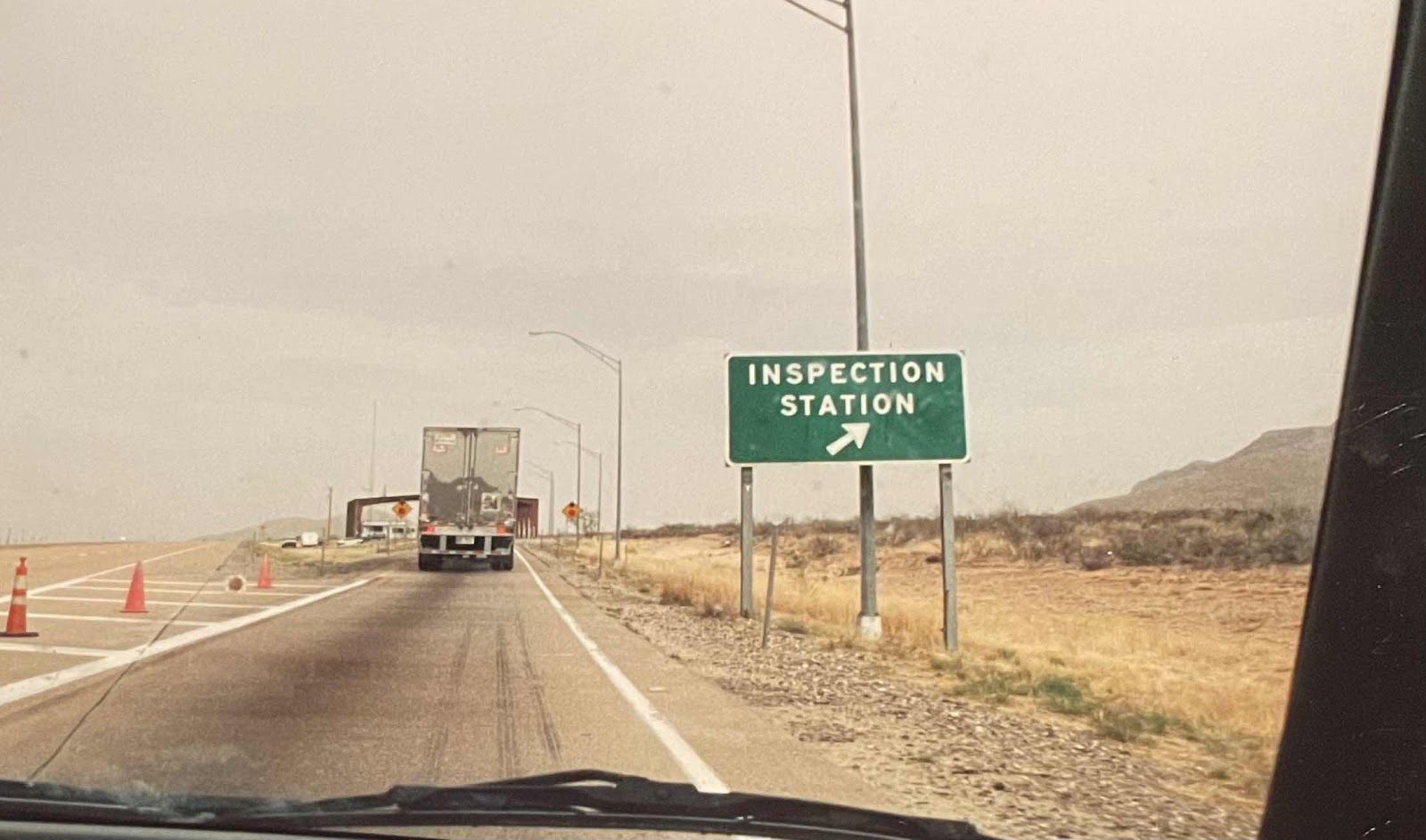 Debs stopped eating suddenly while we were in Santa Cruz. He had inoperable liver cancer and died suddenly just like that, to general family devastation. Emma mourned him for the rest of her life but she lived on for a few more years dying eventually in our Ramrod Key house with Dr Edie in attendance, the same vet who just gave Rusty his travel documents for our next journey. It's been a long life earning our pensions. I am ready for another go. 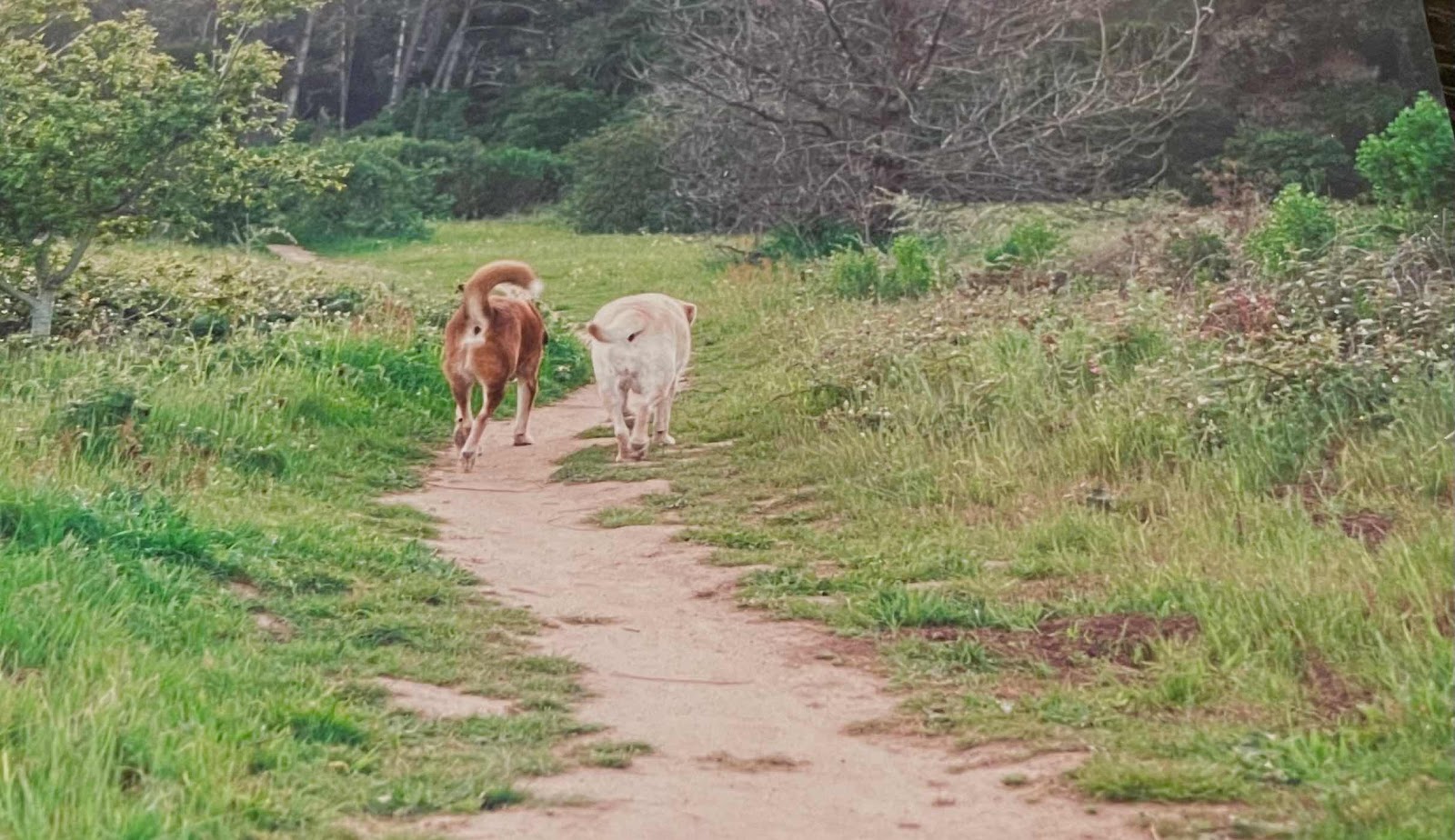 The buddies running through their favorite Santa Cruz walk, the open space at Porter Sesnon in Aptos.

While you won't be on the water...I still wish you calm seas and fair winds.

I've enjoyed your blog for years and am looking forward to your continued adventures aboard the Gannet 2.

safe travels on this next wonderful journey

Enjoy yourselves! Safe travels and May good fortune travel with you always! Give Rusty a scratch behind the ear from me!