We crossed the Mississippi River yesterday and I was gad to leave the state of the same name. Roadside litter, inevitable in any state did not seem to be a concern to lawmakers charged with clean up and trash has piled up along the roads in an unsightly manner. I was surprised it annoyed me so much but I was vastly relieved to take a lunch break across the river in Vidalia, Louisiana, whose cleanliness and order were a balm to my middle class soul. 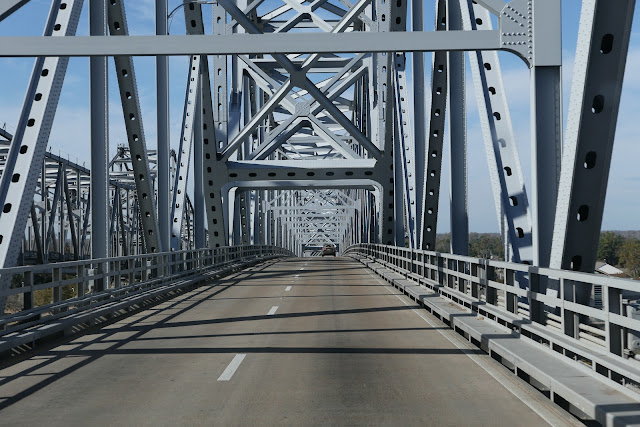 Vidalia is named not for the sweet onion or some other thing but in memory of the city's founder a Spanish official by the name of Don José de Vidal who created the city in 1792. It was a cheeky move as it pushed Spain's possessions across the river into French territory. In 1803 Vidalia got sold, along with the French colonies as part of the Louisiana purchase. In all these communities through which we pass I can only sympathize with the confusion of the residents who were constantly changing language, nationality, currency and allegiance whether they cared or not or had even been told or not. 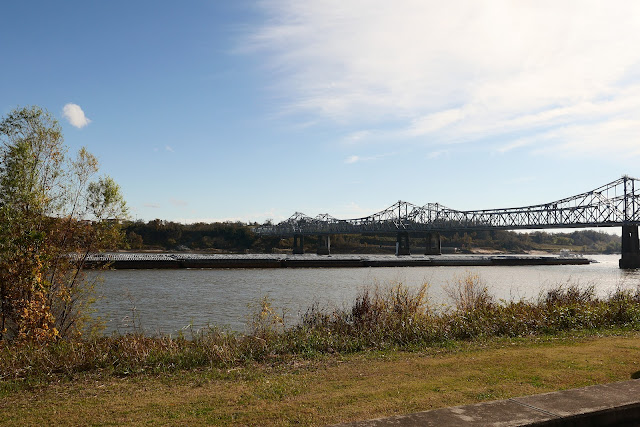 Layne heated soup and made a salad while I walked Rusty along the waterfront deeded to the city by Vidal and preserved as a pleasant open space with an amphitheater and not one sign of trash, though we took advantage of the dozens of trash cans. I also took advantage of the public toilet, a prison-like affair consisting of a stall with a low wall and no door (!) to discreetly empty our own toilet. We had driven in past some people preparing floats for the inevitable holiday parade and on the way out they were gone. 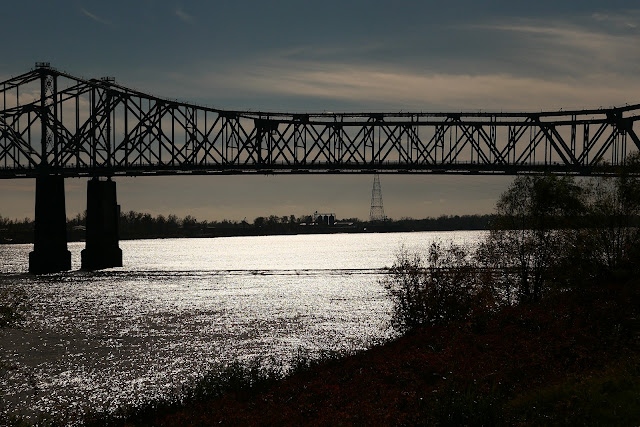 Indeed they were gone and we found them up the street creating a giant traffic jam on the highway toward Monroe Louisiana...We are not in the Keys anymore I said  to Layne and there must be an alternative route. We turned back toward the river and took a side road out into the fields and farms settled behind the river levee. We drove in a wide arc under gray skies with no traffic and I saw a dog chained to a tree in a yard, and yes we aren't in the keys anymore as such barbarity is outlawed there. It was as pleasant as the washboard road surface would allow. As we bounced along Layne said: "How long is the gravel road to the Arctic Ocean, again?" Oh about five hundred miles I said through rattling teeth, "Not that far, really." Dawson City to Toktoyaktuk. That promises to be fun on the Inuvik Highway. 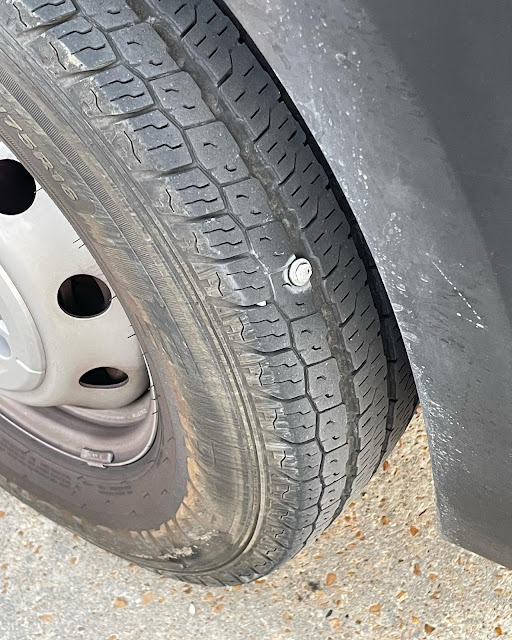 Meanwhile we had troubles of our own. Gas looked cheap in Jonesville at $3.16 ($3.15.9 but I always round up as I'm not fooled by advertising! Ha!) and I pulled forward to walk Rusty a moment. He likes to get out of the van at every stop and have a sniff and I try to indulge him when I can. Walking back I saw the white spot on the tire and hoped as one always hopes that it was a pebble lodged in the tread but it wasn't. The tire did not seem to be losing air but it was getting dark and our planned stop at an I-20 rest stop was two hours away. What to do? I could pull the screw and stick in an emergency plug from my wilderness kit. We could ignore it and run the risk of a flat front tire on a road with no shoulders in the bayou somewhere. Or I could change it here on the cement pad in relative comfort. 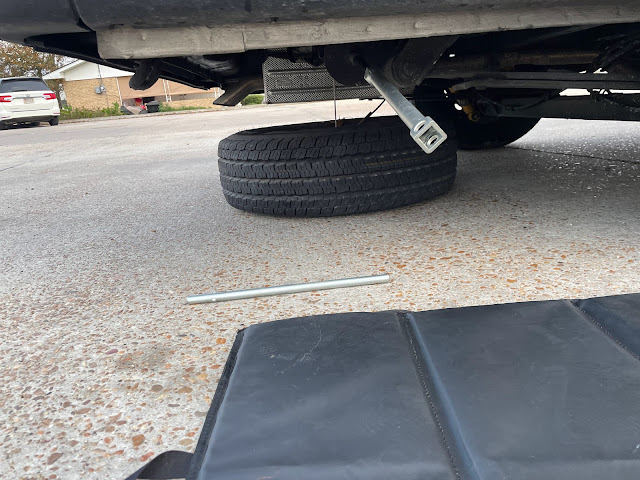 When Key West PD advertised for a Quartermaster a few years ago one requirement was knowing how to change a tire. Apparently it is a lost art among the younger generation. I want say here and now I never call Triple A for tire assistance unless it's a last resort. I had practiced lowering the tire under the van at home, I bought a padded mat to lie on in comfort no matter the surface, I have and use a compressor and I even had a car sized plug repair kit similar to those I have used successfully on my motorcycles. I even bought an additional lug nut wrench for what I presumed would be tougher wheel nuts to remove. I was ready for this. Layne retired to the bed to catch up with her friends on the phone and I got happily to work. 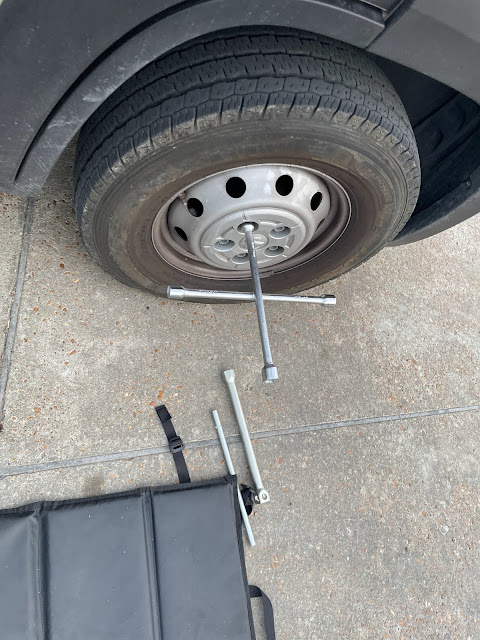 I actually bent the tool slightly as I tried every way I could to loosen three of the five nuts. An older black dude had driven by and offered help but I was so confident I'd said I was fine, thanks. Over confident me. We called Triple A as we had forgotten to activate our Good Sam Membership (!) and help was on the way in 90 minutes. Then Bugger came back. You not okay! he laughed. I explained my predicament. I'll be back he said. I canceled the tow truck. 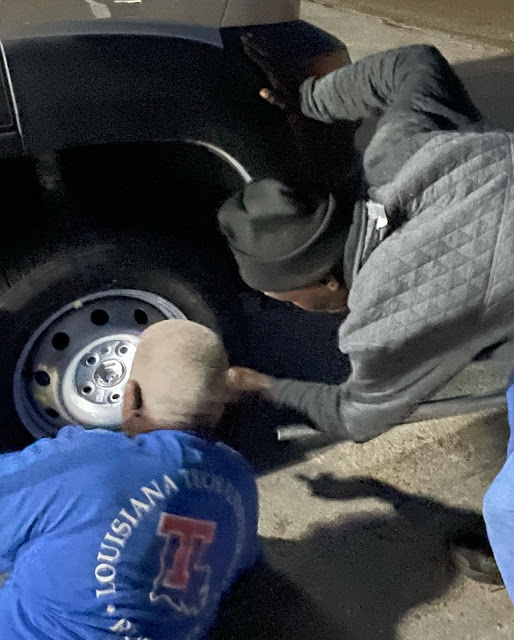 You can see my salvation in the picture above between Bugger and his happily intoxicated side kick, the long silver fence post. I'm buying one in Shreveport after we fix the tire. Then I will be ready for any flats that come my way! I asked his name and he said: "I'm called Bugger, and people think that's my nickname but its my real name." I was slightly taken aback as I say "Bugger!" when I'm confounded and I don't want Americans to know what the word really means. "That must have been tough at school," I stuttered. "Oh," he said shrugging, "I only got to third grade." He refused our offer of money but his wino buddy, sweet as Walter Brennan in To Have And Have Not ("Did you know you can be stung by a dead bee?") eyed the $25 like all he could see was jars of Night Train stretching out before him. Give it to him Bugger laughed and "Eddie" took the money gratefully. 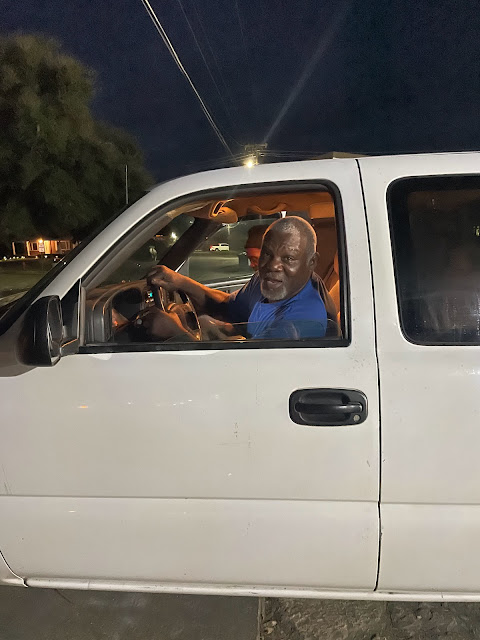 It was a lovely encounter brought on by my own shortcoming. I was annoyed for a while I had failed to properly prepare and I nearly missed a turn or two in the darkness as I pondered my failure. In the end though it was good that it happened the way it did in the right place at the right time and I know where I will stash that tube we need! 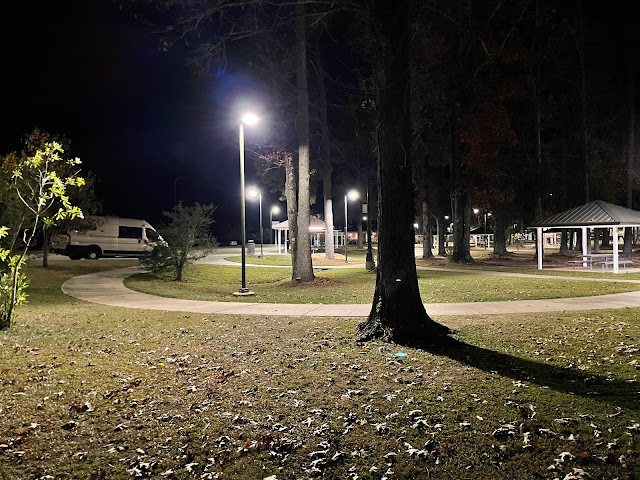 We drove through the dark, arrived at the rest area and ate the barbecued chicken Layne bought at the gas station and it was delicious. And then we passed out. I awoke around seven to the sound of scrabbling under the bed as though the largest rat in the world was sharing our 70 square foot living space. A peal of enormous thunder rolled over us and rain hit the roof of Gannet 2 like hail. I must have been awakened by the thunder I thought to myself. Then I heard the scratching again from under the bed. Layne went to look for Rusty and there isn't much to look at in our living space. Sure enough our traumatized dog, shot at and abandoned in the Everglades with angry farmers for neighbors had crawled up under the bed. 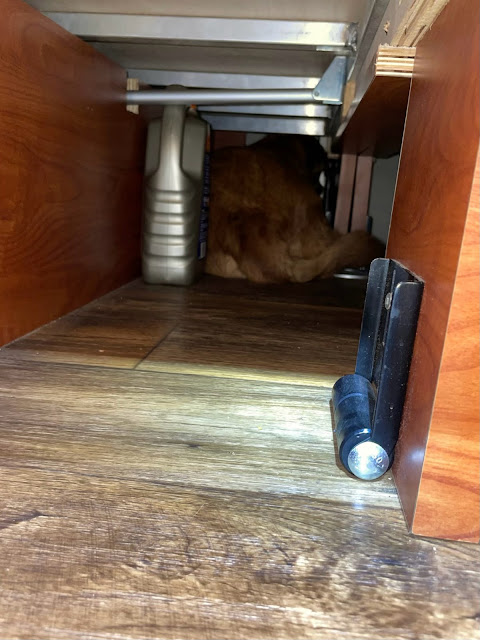 Leave him there Layne said if he feels comfortable. I thought that sounded a bit off but it's true: Rusty knows what he wants and right now he wanted a dark tight space to evade his nemesis. I lay there for a while as Layne tried to get a tire company in Shreveport to answer their phones. Then I got up because I couldn't leave the poor runt squashed up under the bed like a Russian miner under a roof fall. I got up, got dressed, fumbled for the umbrella and put on my head lamp. "Are you going dog mining?" Layne asked. I never thought this would be one the tasks of van life but here I was ready to go out the back in the downpour and pull my dog to "safety.". 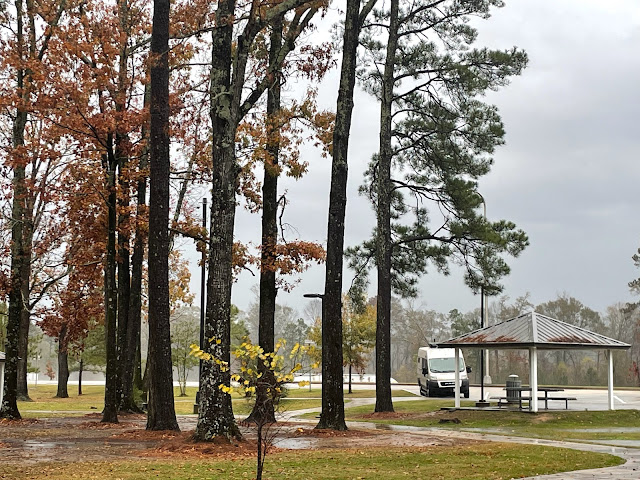 I was reluctant to get out as it was pouring with rain and as I dithered the scrabbling and scratching started again and sure enough a small brown face reappeared under the bed. We waited together for the rain to ease and we ended up going for a splash filled walk. 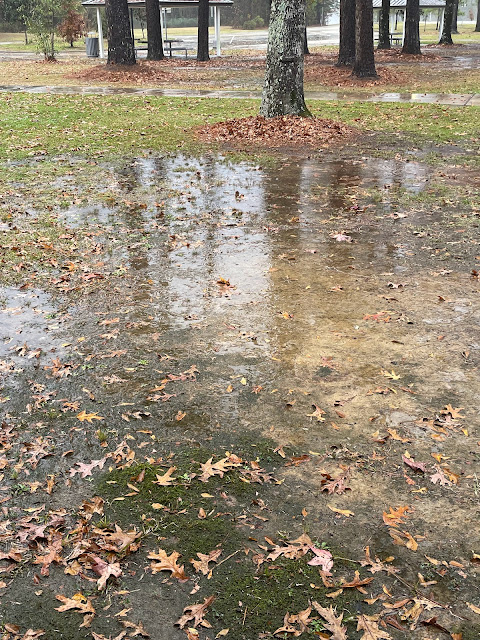 I felt better once he felt better, but I think the storm was fierce enough to make telephone communications awkward. We couldn't get through to Shreveport so we will stop after our planned and long delayed stop on the way, and the we get to the city we will see what's what this afternoon. It's at times like these that not being on a deadline is really rather lovely.

From the 1944 movie Walter Brennan with Lauren Bacall:

Posted by Conchscooter at 10:30 AM

As a somewhat petite woman with wimpy little arms, my first task with any new car is, like you, to get a T lug wrench that would fit (metric, English, blah blah). Then I needed to be prepared to climb up and stand on the thing to loosen the nuts. Whenever possible, I ask whoever’s rotating tires or whatever on my car to tighten the lugs down by hand instead of using a pneumatic wrench.

And then I just keep my AAA membership paid up. 😄

That "tube" is often called a cheater bar and it sounds like a great necessity. And Bruce's Law of Perversity suggests carrying one will guarantee you will never need it!

Wonderful story!! What a great encounter. That's great material for stories by a camp fire.

I have my cheater bar. $21 from Lowes in Shreveport. 36in x 1.25. I actually stood on the damn tool to break the but free and nothing happened. That was when I knew I was outclassed.

Genius! Buying a cheater bar at Lowes is brilliant. I only have experience with "Found" cheater bars and currently hope to find a bit of pipe for my new trailer, but this fence post idea is good because I may have one aound behind the shed!

I hope it works. I spent $21 at Lowe's in Shreveport for a 36 inch galvanized pipe 1.25 inches in diameter. It fits neatly over the head of the lug nut tool. We are ready!