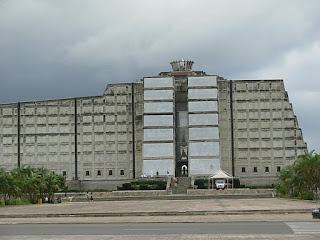 In 1992 a lot of important someones decided they were going to mark the 500th anniversary of Christopher Columbus's arrival in the New World and the epicenter of the celebrations was going to be in Santo Domingo, site, near enough, of the first permanent settlement of Europeans on this side of the Atlantic Ocean. I mentioned a few months ago my startling discovery of the book titled 1421 which asserts, convincingly enough, that Columbus and Magellan both set off across the Atlantic with Chinese charts in hand and Vasco da Gama knew what to expect around the corner of the Cape of Good Hope. A glimmer of these heresies was actually on display in the "lighthouse" built on a hill in Santo Domingo to celebrate the anniversary. 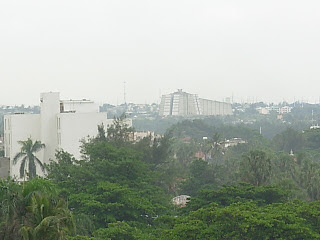 I found out this bizarre building was designed by a British architect for the world's fair in London in 1936 and was built in Hispaniola eventually as the centerpiece of the acknowledgement of Columbus' trek to the Bahamas. The faro (lighthouse) does actually illuminate at night but such is the electrical draw it tends to black out the rest of the city, so the illuminations are infrequent but I did sneak a photo of a postcard illustrating the effect, a Christian cross in the night sky, near enough: 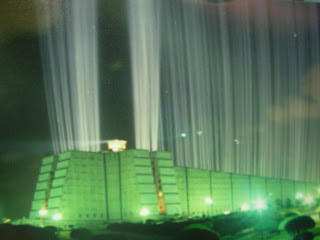 Indeed the day we took a gua-gua (minibus) out to the monument it was gray and overcast and threatening rain. We need a light to show us the way. 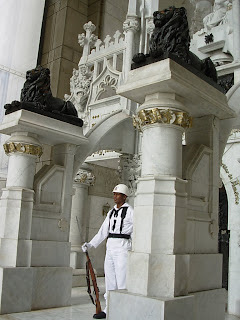 The navy guard at Columbus's tomb stands at the apex of the church-like building with corridors running down each side of the open air central "nave." 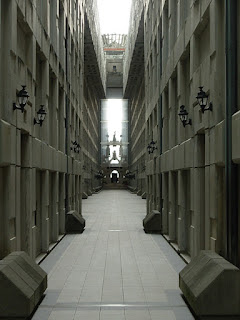 The lower floors had open windows and the impending storm blew scads of cool air through the exhibits. 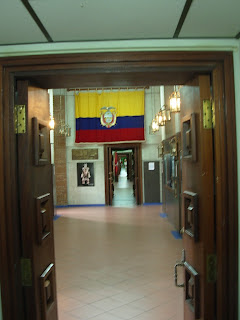 The various rooms are devoted each to a different American country or colony. French Islands have their room as do the Dutch Antilles, alongside Venezuela, Cuba, Canada and everywhere else from Argentina to Italy ( Columbus was Italian of course). There was also a curious exhibit from Taiwan, Republic of China, asserting the very same thesis posited in the book 1421, that the Chinese passed this way long before Columbus. 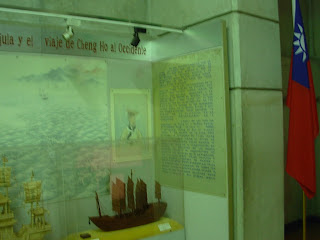 The US room had the obligatory letters of congratulation along with photos: 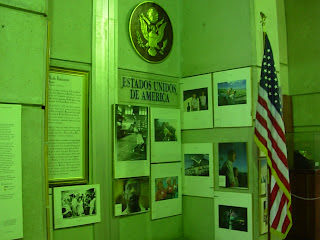 The US exhibit contained excerpts from the book "A Day In the Life" with an odd cross section of daily, multi-cultural activities around these United States. I don't suppose there was much else to write as Columbus never actually stepped on the US in his forced march to beat da Gama to the fabulous Indies. 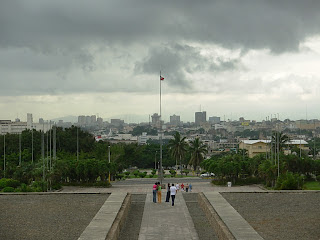 Outside the Faro the weather was looking like crap so we bought some postcards from a vendor and made him happy, snapped a picture of an attempt at a cityscape under the glowering skies and scampered back to our five star hotel room far from the crumbling decay of tropical Santo Domingo. 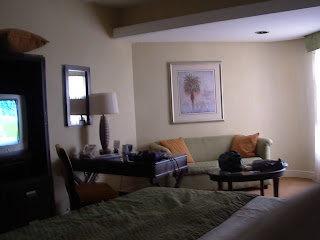 The faro struck me as a grandiloquent gesture trying to embrace all the nations subsequently populated and exploited by Europe, and pointing them inward at the tiny country hosting this massive palace; but it seemed to be trying too hard. And whatever that English architect was thinking I can only imagine that he, like Samuel Coleridge, was high on heroin when he penciled his masterpiece. This is one unusual human monument I wouldn't want to miss, and now I can die knowing I haven't.

Posted by Conchscooter at 6:19 AM