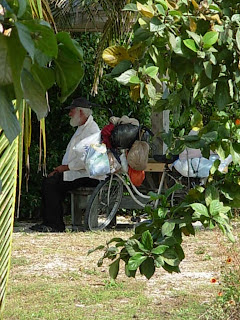 Nancy cremated her ex-husband in Key West this week. I thought his death might be a sign from on high that it's safe for her to move back from Ocala the Land of Frost, Up North but she says it's "too late" to live in Key West anymore. It was great when she lived here tending her drunken husband but not anymore. Being away, she says, makes her realise just how dirty Key West is. "Dirty " is a euphemism for the epidemic of street people. Just like this dude sleeping on the Monument at the corner of Elizabeth and Greene Streets, surrounded by tourists trying to peruse their maps and study the inscription. He just snoozes the day away, alongside his belongings. 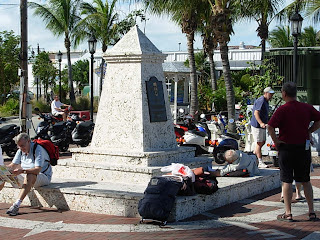 We get lots of calls at the Police station about bums, street people, sleepers panhandlers, drunks and vagrants. You name them we hear about them. An officer coined the phrase over the radio to me one night about moving on one of our "residentially challenged" citizens. The term stuck in my mind. We used to list them in police call-outs as "undesirables" but the term was considered too negative, so now we call them local subjects or informally hotel charlies. To be a homeless citizen in Key West offers opportunities for waterfront living, and though I would find it horribly dull to sit and stare with nothing to do all day our hcs revel in the void. They gather at Higgs Beach at the tables and talk and drink and fight and live out their little dramas like street performances that scare off families and cause people to...call the police. They piss someone off, a parent perhaps taking their kids to play at Astro City playground across the street, and we respond and move the hcs to another location. Lovely Simonton Beach sounds like a nice spot. 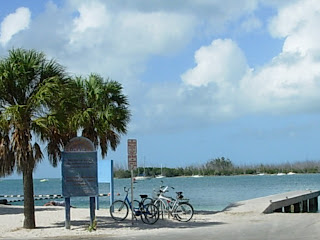 Which only looks like a park, an ideal spot to hang out and chill during a lunch break. Its actually these hotel charlie's living room: 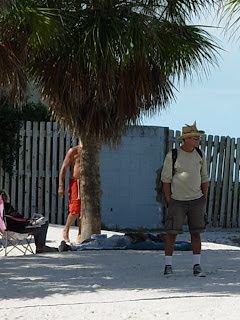 The city of Key West and Monroe county provide free shelter in air conditioned tent-dormitories on Stock island conveniently located next to the Sheriff's office. There the working poor of the island can shower, use the lockers and the phone, collect mail, do laundry and show up for work each day as well groomed as a housed worker. The people who litter our streets and beaches aren't working poor, they are seasonal derelicts many of whom travel down in the winter and some of whom leave in the spring. There is no plan to deal with the problem except the rather draconian idea of removing park benches so people can't sleep on them. Like at Bayview Park, across the street from the police station. 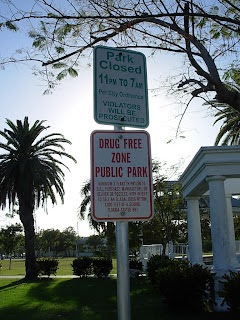 Welcome to Key West, and our signs are more suggestions than actual requirements, apparently. 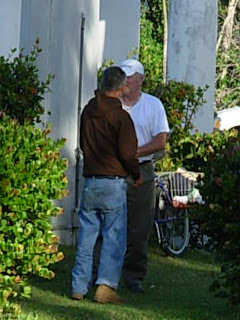 It is illegal to deny people access to parks and streets just because they are unkempt or homeless, and there are no laws against sleeping during the day in public places. Too bad its too hot to keep the door closed on this van occupied by a near naked body. 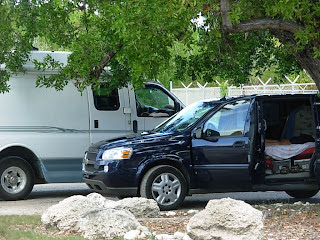 Subtlety isn't a priority of homeless citizens, they like to hang it all out and give our parks a special flavor. 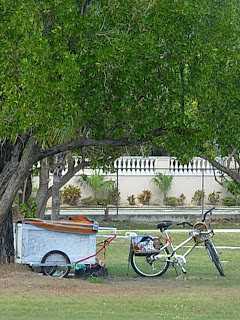 Like a refugee camp.At night it is illegal to park on the streets and sleep so the campers park at Publix, a private parking lot, or at Albertsons, both in New Town and spend the night there before returning to White Street at Higgs Beach for some sea-side fun at the AIDS Memorial by White Street Pier. 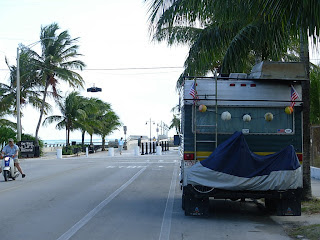 The residentially challenged are here for the winter and they may not have houses but they have homes, all around the four mile long island: 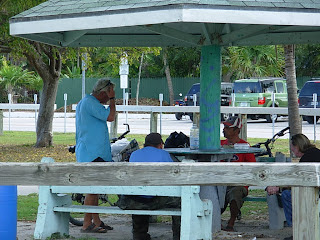 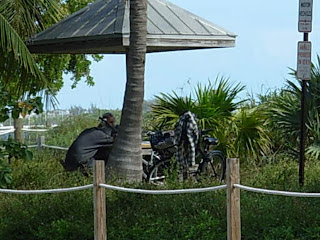 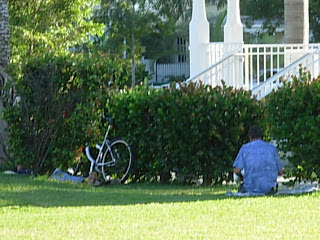 It beats me what the answer is, and my preferred suggestion is that residential citizens gather up their picnic stuff and head out en masse to take back their beaches and parks. I used to make a point of taking a seat at Rest Beach or Bayview Park and reading a book during my lunch break, but instead city leaders took away the tables hijacked by the hcs and thus leave the park unusable by anybody. So now I pay to hang out at Fort Zachary, a state park where the modest entrance fee keeps out the riff-raff.

Just another reality of daily life in Paradise, where having a home is an overrated commodity.

Posted by Conchscooter at 5:48 AM

Written by a Republican prick.

No ghost writers here- I also wrote the entry on voting for Barack Obama, even though I find him rather more to the right than I would like. There are over three hundred entries in this diary for you to read, but I'm not interested in making this a space for politics so any more thoughtless insults get deleted without comment.