The East Martello Tower on South Roosevelt doubles as a museum as well as an historical monument, and it does both very nicely on a sunny winter afternoon: 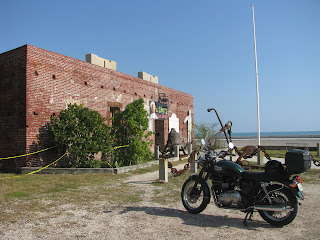 The pile in front is my Bonneville hiding a pile of ship's anchors and chains thrown around for nautical effect. The interior of the museum is also a pile of absolutely fascinating artifacts of Key West's history, arranged in the corridor that makes up the wall of the fort: 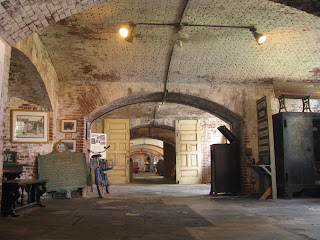 There is a fee to get in, but all I noticed was that with the local's discount I paid five bucks so I'm guessing an out of town visitor might pay $6. It's well worth it, as the museum has been spruced up quite a bit since last I was there a few years ago. Fred the cat patrols the front desk area and gift shop: 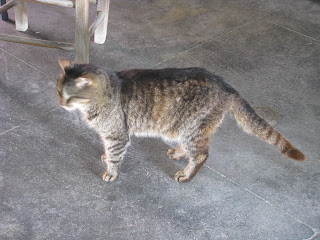 The first stop was a diorama of the lighthouse with some of it's history but as I've already written about that delightful point of interest I limited myself to recording this gruesome instrument of torture, which previously I had only ever seen in the movies: 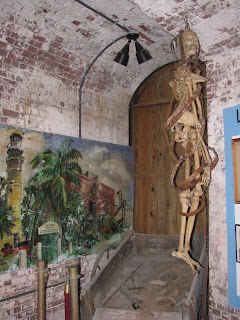 No museum worth it's salt in Key West will skip the desperate love affair that Karl Tanzler enjoyed with a young Cuban woman: 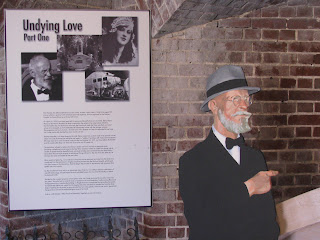 The German X-Ray technician employed at the naval hospital looked paternal enough but he conceived a most vivid love for the young Cuban woman called Elena depicted while alive just above Tanzler's shoulder. He promoted himself to Count Von Cosell and lived in a hut on the beach, whence he repaired with the unfortunate young Elena and played the pipe organ to celebrate their love. The only glitch was she had died of tuberculosis and he had been forced to dig up her body and repair the ravages of the grave as best he could. This ghastly parody of love went on for about seven years and when he was finally busted it was the 1940s and there are people alive today who remember Elena's waxy remains on display in the city: 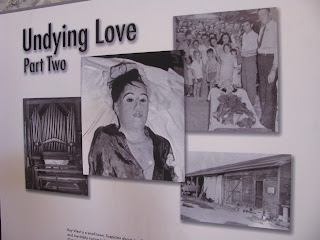 That story never fails to give me the creeps and Ben Harrison's biography Undying Love spares no gruesome details. East Martello is also host to another of Key west's weirder characters, known simply as Robert the Doll. It is traditional to respectfully ask permission of the doll prior to taking a photograph, and you'd better believe I did. 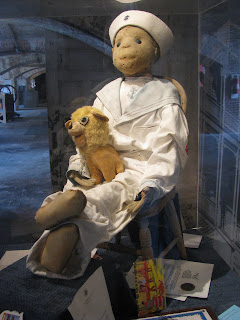 The story goes that a servant in the Otto family gave the son and heir Gene this doll in 1896, and because the Otto's treated their servants so badly the servant put a voodoo hex on the doll which became Gene's constant companion. The adult Gene set Robert in a room overlooking Eaton Street and such was the doll's reputation people were afraid to walk past it. Even today there is a wall at the Martello Tower dedicated to letters from people thanking the doll and apologizing to the doll asking for their bad luck to be lifted: 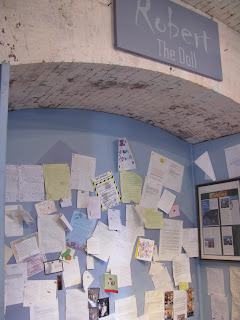 In the interests of my own good fortune I have no comment. There are others who had bad luck but of the meteorological kind, namely Cuban rafters. There is one such machine,if it can be called that, in the corridor of the East Martello, dating back to the 1960s. It was basically a collection of saplings bound together, found with three ID cards, and the fate of their owners remains unknown: 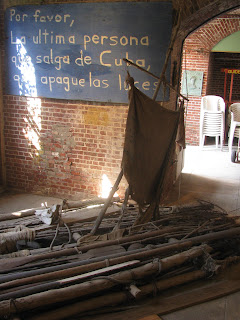 The sign behind the raft says, Could the last person to leave Cuba turn out the light... Before the US decided to embargo Cuba there was a long history of exchange, both cultural and economic between Key West and Havana. That exchange was typified by the cigar industry which settled in Key West for a while before moving north to the wide open spaces of Tampa and Ybor City. The Key West era is marked in the museum: 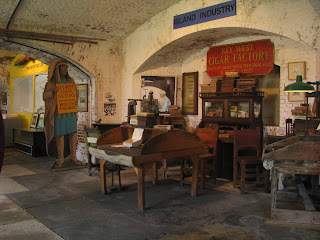 The first international flight left from Key West in 1913, and took two hours to reach Havana 90miles (150 kilometers) to the south. Cuban Domingo Rosillo was at the controls of his featherweight monoplane: 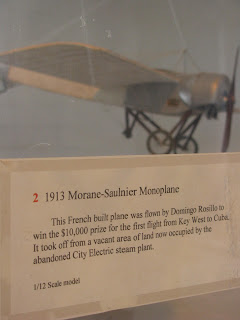 Augustine Parla, another Cuban aviator was the second person to make the flight a while later. Pan Am started mail flights between the two cities in 1927.
The Martello Tower also offers park like ambiance inside the walls, and makes for a pleasant place to sit outside and avoid the cool north winds of winter: 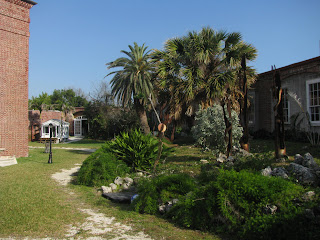 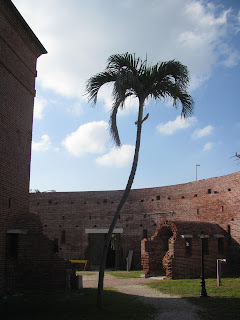 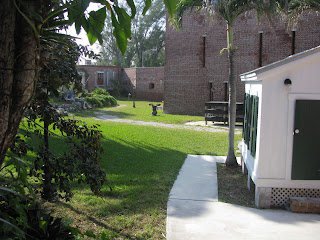 And aside from all those splendid lawns there is a viewing platform at the top of the central tower, reached by climbing three narrow flights of an iron spiral staircase. From the top one gets a view across the Straits of Florida. 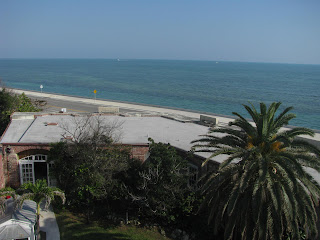 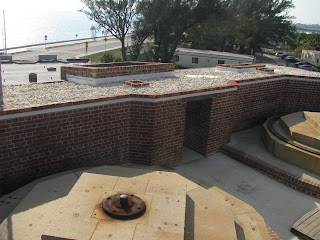 A pleasant afternoon at the Martello Tower.
Posted by Conchscooter at 12:01 AM

Once again, a nice taste of life in the keys. The museum looks like a pleasant place to kill an afternoon. In the last picture, there are two stone or concrete "bases" with metal disks. Were these artillery mounts?

I certainly understand the doll with the curse. I was married to one.

They have those bases at Fort Zachary and Ft Jefferson ) none ever used in actual warfare) that allowed the cannon (Rodman rifled bores if I remember right) to swivel on the cement bases. You married to Robert would be a gas.

I love people watching. It's interacting and talking with them that I have problems with.

Photographing them is none to easy either.