Angela By The Cemetery

Oh glorious summer, back so soon. 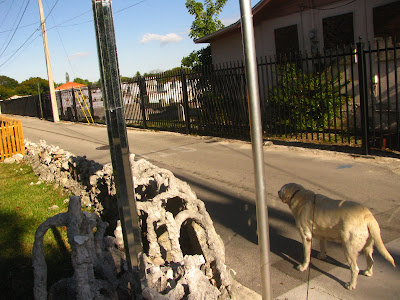 It's not really summer just yet but we are in the middle of a heavenly streak of perfect weather with daytime highs around 80 and nighttime lows around 70 with a light cool breeze from the southeast. I wait anxiously for summertime to kick in on the morning of March 13th but I can already see the evening hours of daylight stretching out a little. It's about 6;45pm before it gets completely dark and at a stroke it will be almost 8pm when night falls in less than a month. Delicious! The photo above was the start of a late afternoon stroll recently up Angela Street from Margaret. The home on the corner belongs to the late artist Carolyn Fuller whose home is now fenced off. 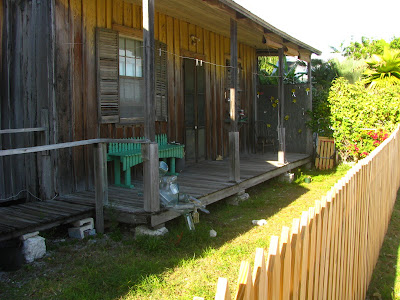 I grumbled about the fence and got a comment saying people were ripping "souvenirs" from the place. The older I get the less able my fellow humans seem to be at acting polite in public. If I had to live in the city I'd like to have the cemetery for my neighbor. Not only is it pretty to look at but the inmates don't disturb. 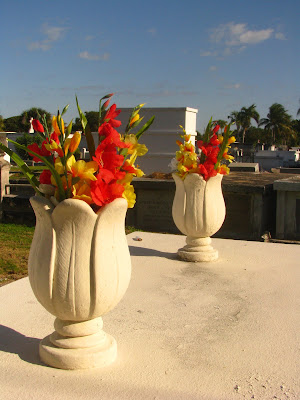 Lots of people are afraid of cemeteries and dead people, an attitude I find rather odd. When I worked in town during the daytime I would frequently come into the cemetery, check the headstones which are packed with history and eat a picnic lunch among the dead. It is, I grant you, sentimental but were I dead and buried here I'd enjoy, if I had any sense of being, getting a break in the monotony with a visit from the living. As it is Angela Street runs along side wo with a dog, banned from the cemetery itself, I was limited to looking through the fence. I also noticed this old roadsign, the sign itself removed from the post. That was owing to a recent deicsion to reverse the one way traffic on this section of Angela Street. 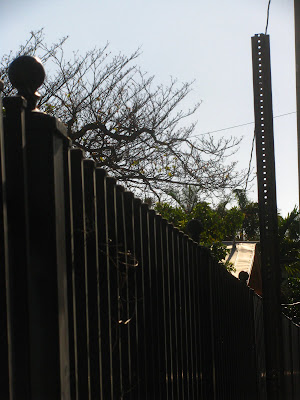 I still have trouble remembering the correct order of one way streets in Bahama Village which were all changed a couple of years ago. Imagine how much of a struggle it is for me to remember this unexplained change as well. Traffic now travels inbound, westbound from Frances Street. 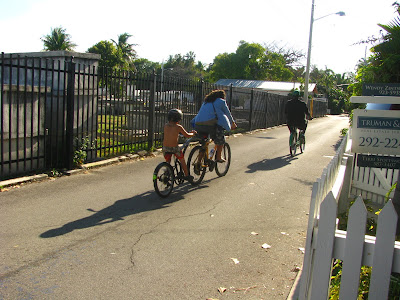 Angela Street is actually a nuisance to walk along as there are no sidewalks and even though the street is quite wide enough for a pedestrian and a car, all too many car drivers have very little idea of how much room their vehicles need. So, in between looking out for vehicles I took a moment here and there to enjoy the architeture and the greenery. 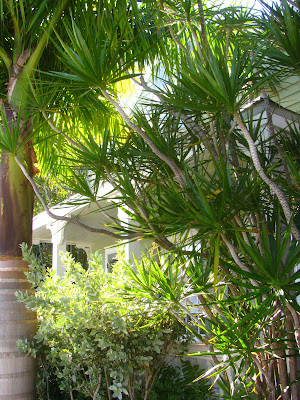 Half way down this block of Angela lies the little side street called Catholic Lane, because of it's proximity to the Catholic section of the cemetery across the fence (in death Key Westers apparently prefer to be sgregated by religion, as though God cares). Catholic Lane merits its own essay, of course and wouldn't you know it, that one is already in the bag: http://conchscooter.blogspot.com/2009/03/catholic-lane.html 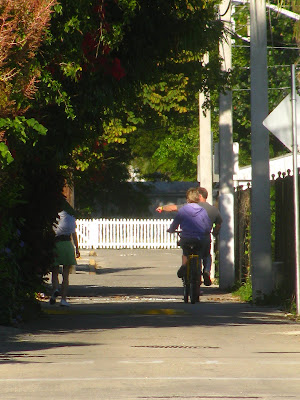 Even though Angela is one way the other way don't be surprised to see cyclists riding the wrong way. And biy, do they get indignant when advised they can get tickets for wrong way on a one way. I always check both ways at intersections in Key West as one way streets are frequently converted to two ways not only by errant cyclists and mopeds but also by confused visitors. 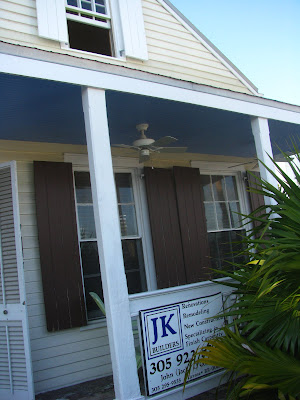 And just to brighten up the scenery I came across a Vespa similar to my wife's ET4. 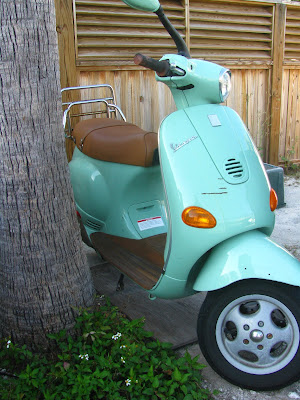 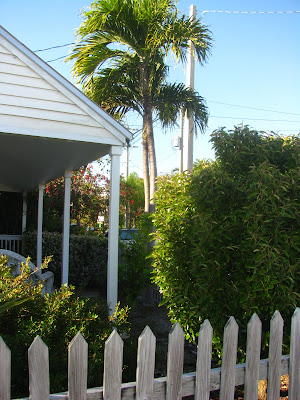 And I don't even mind meeting other dogs on the street when they are friendly. A friendly owner is a bonus. 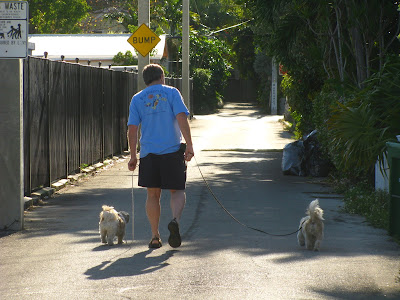 I remember living with two dogs at once, crossed leashes and all. I am rather glad Cheyenne prefers to live in a one dog household.
Posted by Conchscooter at 12:01 AM

Feel free to gloat... Western Washington is under yet another Winter Storm Warning, with possible snow accumulations of 4-6" in Whatcom County. I'm told temperatures lately are 10-20 degrees below normal. Or "normal," your choice...

I have to go to Santa Cruz California for a memorial service the weekend of March 25th and I am dreading the weather already. I love this stuff, strong sunshine and a light cool breeze is a perfect 80 dgeree afternoon. Dispatch positions are filling up...we may only have one opening left I am told.

Hi there! Discovered your blog today and will certainly be reading more of it, as it is my dream to visit the Keys. Thanks for letting me live vicariously through your photos!

ps. I totally agree about living next to a cemetery, it would be so peaceful and lovely.

Sooner or later someone is going to invent a virus that turns the recent dead into flesh-eating zombies. When that happrens, houses on plots adjacent to cemetaries won't be worth a nickle. And instead of you eating lunch on a grave, the grave will open and you'll be lunch.

Can you imagine dead mindless zombies feeding on the productive living? It would be like living next to Coongress. The Jed Clampett look of the house in Photo #2 is very reassuring that not everyone in Key West is a stuck-up poseur.

I have socks the same color as that Vespa.

Dear Clyde, Call your mother, remind her your birthday is coming soon and ask for a pair of socks of a fresh new shade.
Dear Edgar, I haven't had lunch among the dead for some time (NEVER on a grave, by the way) so I am out of touch with the latest gossip. Thanks for keeping us up to date. I look forward to the arrival of your flesh eating cousins.
Dear Ms Buccaneer and Ballgown welcome to the asylum. If you would like to contribute ribald nudity there are those that would appreciate it. I am not one of them. but as you can see this place is pretty much out of control. However i can assure you I am will continue to fight off advertisers and as many perverts as I can locate to keep this a ....oh what the hell, it's too much fucking effort. duck and cover I say, and pray riepe is too busy trying to mount his motorcycle to put in an appearance.

I am told in New Orleans, relatives would make a day of picnicking in the cemetery.

Carolyn Fuller I had to Google. I guess this wooden fence was not the first wall around it? There used to be a "bottle wall" around it? That would have been interesting to see.

For some reason I like the above ground tombs there better than the below that are more customary. Perhaps because the boundaries are more clear...

My husband had his portrait painted by Carolyn Fuller at her home when he was a child. A few summers ago,he took me by her home to meet her. When we knocked she peeked at us through a shutter. Her home reminded me of the
once-ler. If anyone is curious, this site has a picture of it:
http://www.spraygraphic.com/ViewProject/578/normal.html

I remember a book I had to read in high school, when reading was still an important skill in high school, called "Life With Father." I would recommend it to anyone. You can probably still get it as a Penguin Classic. "Father" was a tough character in the Victorian era, who made it clear that he wanted to be buried in a corner plot at the cemetery, so he could get the hell out if the place eventually attracted riff-raff.

@Jack - I think I would have liked this "Father" character. Then again, I liked Paris in Paris Trout, even if he was a sadistic mean fuck.

Your diary and Howard Livingston's daily Facebook pictures of the sunrises and sunsets at his home at Mile Marker 24 really makes the winter more bearable up here in Montana. We have a foot of snow in Paradise Valley and it's going to get down to 13 below tomorrow night.

Every time I look at your blog and see your photos and you weather I get a bit envious. Not a bit envious - more that, what-the-hell-am-I-doing-here kind of envious. Why don't I pick up and move somewhere I can spend my days reading, riding and dozing in a hammock.

Can't complain up in VA, though, either. We've had a pretty solid bout of unseasonably warm weather, and like you, we enjoyed the hell out of it. Of course, it snowed this morning, but 70 degrees this weekend was enough to get me tearing a motor apart and into a project that puts me in completely over my head. To hell with it, the weather is only on the way up.

Jeffrey- I am with anyone who wants to picnic in a cemetery. Sharing life with the dead can't be bad- we're all going there one day.
Brady- the weather in summer is exceptional especially as the population is much smaller. I love summer clouds and thunderstorms and rain. Its the first time in my life I liked rain.
riepe- let me know if you ever need a stern father figure- I will be happy to fill in.
Bob I hope you survive the snow. I seem to recall Montana was exceptional in summer.Perhaps it still is.