I went to the dentist last week in a blaze of sunshine. I parked Cheyenne in the car under the convenient large tree in the parking lot and went to get the tooth cleaned. Many people dread the dentist but I am not one of them, and my banter cheers Doctor Harris up enough he dropped by to say hello as I was strapped down with a polisher in my mouth and my teeth gleaming once more. I floss regularly in case you were wondering and it pays dividends when I get my twice annual check up. 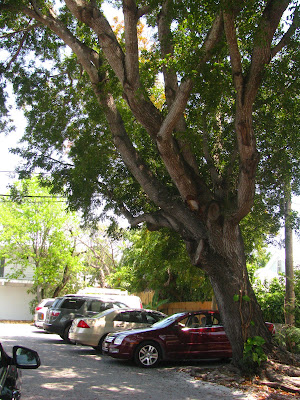 "Great teeth!" the dentist said as he admired my X-ray. Apparently some patients are afraid to have x-rays for fear of the radiation which sounds loopy to me, but then again some people think vaccinations are the work of the One World Government so there is no accounting for people and their fairy tales. It looked like a grim fairy tale when I came out of the dentist's office on South Street. 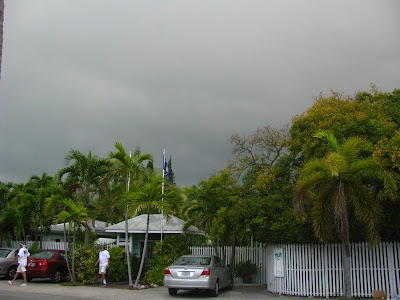 The dried up leaves in the big tree covering my car came down like snowflakes and passed through the sunroof opening to cover my dog. 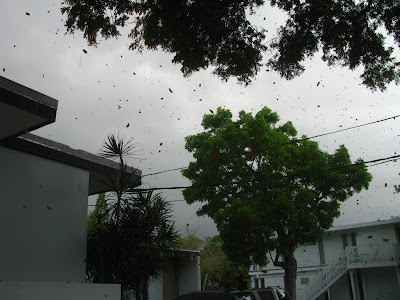 Soon enough the wind was followed by rain and it was looking like a proper summer afternoon on Simonton Street. 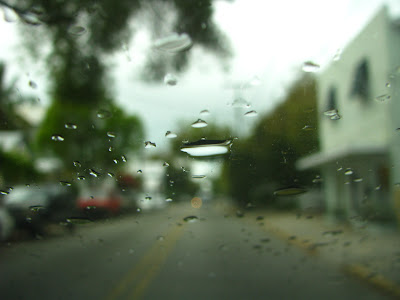 There's an old sailing ditty that indicates that if the wind comes before the rain the weather will improve soon (Wind before rain, topsails remain; rain before wind, bring the topsails in) so I figured we should continue with plans to go for a walk. Truman Waterfront was the destination and these women were hurrying home from the beach. 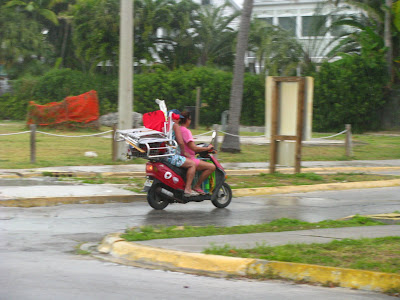 I don't think they made it... As previously mentioned Cheyenne and I walked a little and watched a lot as the rain came down but it ended soon enough. I made up for the lack of walking by stopping in town and taking a turn around a few city blocks. I saw this gas canister doing extra work as an advertising billboard and as a recycling can -of all things. 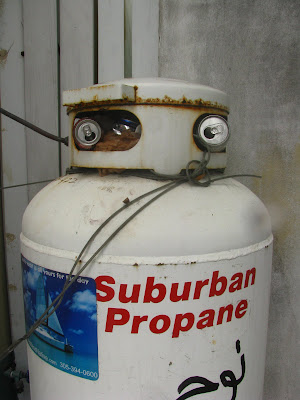 It costs almost $400 to fill my fifty gallon tank at home and it gets filled about twice a year to power our shower. A solar installation to heat water would cost about $3,000 at least which is a large lump of money. I think it may be in our future if pay cuts ever stop and reverse themselves. 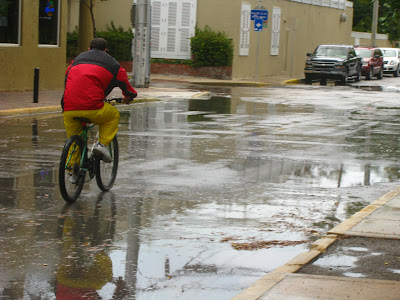 In fact the storm blew away and left reflective wet streets in it's wake. We could lots more rain if it were available.
Posted by Conchscooter at 9:01 PM