I don't use a drier at my own home. I bought some line and strung it up under my house and let the clothes swing in the breeze. Our drier died a couple of years after Hurricane Wilma sent it briefly under water and we decided we had better ways to save 500 dollars than buy another such machine. My clothes don't look picturesque like this but... 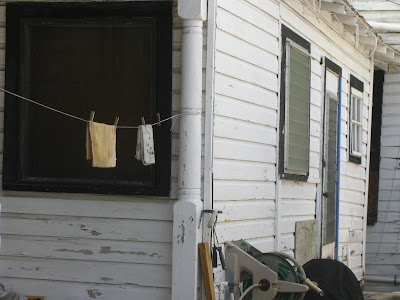 ...I have found that air drying clothes makes them feel less stiff and it doesn't shrink them and they seem to last longer if they aren't tossed around in hot air in a flailing metal drum. Odd, that how the natural way works best. Plus we evade the corporate consumerism thing of buying more stuff all the time. Looking at this doorway below, I rather wondered why the occupants of Unit 2 were forced to bend double to get their mail- the last arrivals to the communal house perhaps? 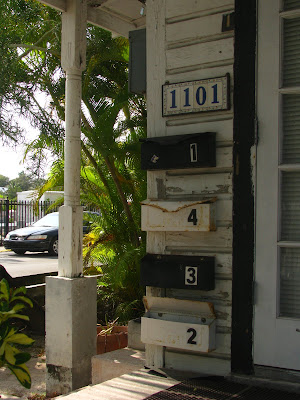 Seniority might just offer the easiest and most convenient mail box. Or possibly the occupants of unit two are the most limber in the house. We strolled past the newly re-opened Frances Street gate to the cemetery. After months of furious debate the city commisison intervened and required the gate be left open by day for pedestrians and cyclists, and the irate sexton is only permitted to close it for funerals. 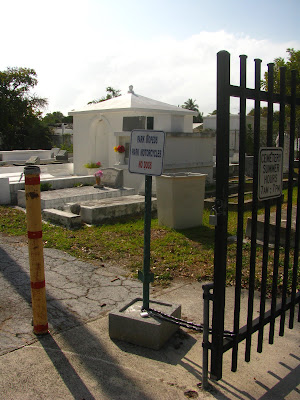 The sexton had unilaterlally closed the gate permanently saying inconsiderate people had been using it's easy access to disrupt funerals. The city's open arms approach to the tourist economy is not quite so open when it comes to respecting the dead. But even here it is a struggle to imbue people with that respect and it isn't always visitors either, not by a long chalk that don't mind how they behave in public. Perhaps this little tussle over the gate will remind people of thatneed for public probity. Looking up another Key West skyline: 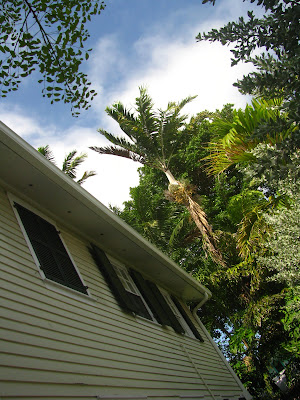 Another red flower, Key West is full of them. 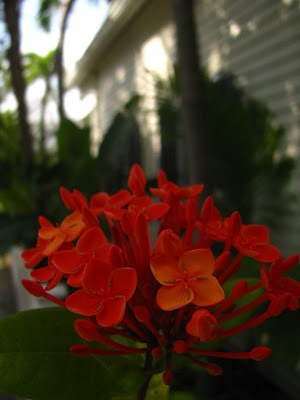 Some time ago Chuck on Fleming, currently working at being an engineer overseas, told me modern cars have a limited lifespan by design. He set me to thinking about how annoying it is that all those plastic components are designed to self immolate after a decade or so. Older cars he said don't have that kind of planned obsolescence. I rather fancied this convertible Cadillac for my wife, not that such a magnificent machine is for sale or anything. 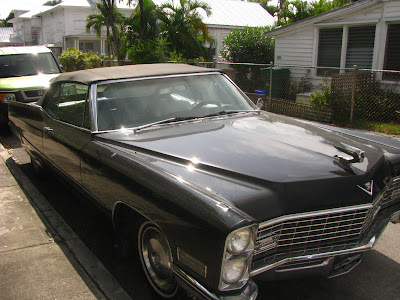 Besides we drive rather a lot to be living with single digit gas mileage...Look at this next sky picture. Key West is far too lovely. 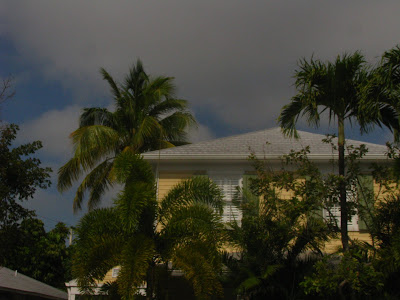 I enjoy seeing heaps of bicycles round town. Nowhere in North America do you see basic transportation piled up in daily use like this. 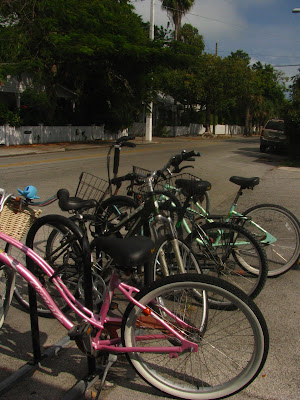 This fish stand has survived and apparently flourished, as improbable as that seems. Some businesses do really well, others come and go. This one gives a splash of color at Truman and White. 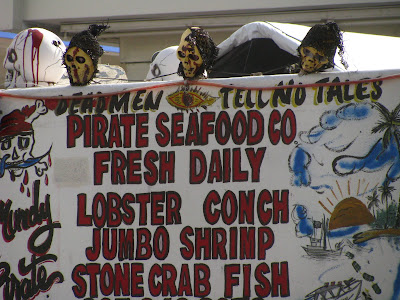 Art Alert: I was playing with the camera while Cheyenne sniffed and I came up with this picture of a pink Jeep's hood. It would match my Crocs. 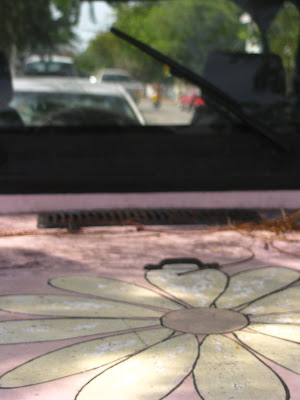 Another picture of daily transportation, this time attached to one of the cuter bike racks around town. A dental office has a tooth bike rack in New Town. 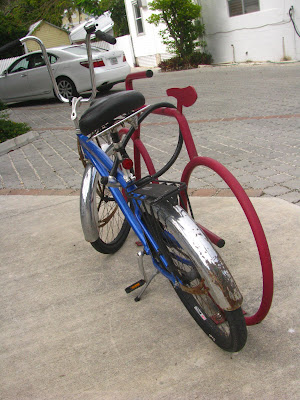 Cheyenne and I strolled past this sign on Truman offering rental and sales services. Imagine my ironic delight when I noticed their own building was for sale! I suppose from time to time this sort of thing happens but it was a first for me. 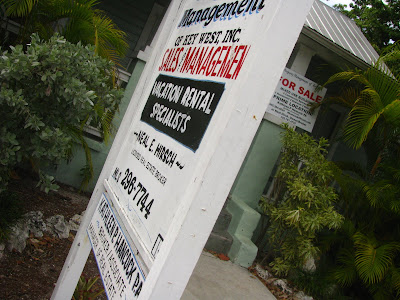 Florida's cretinous governor is now promoting a new state law that would allow anyone to rent their homes for any unregulated length of time, overriding limitations like those imposed by Key West and Monroe County. The county allows no short term rentals (less than 28 days) and Key West only allows some to properly licensed homes. The idea is not to allow neighborhoods to become unlivable and overrun by party harty central. The Governor wants to overturn that sensible rule and his shills say it will help break the monopoly of the tourist industry. Weird but true. 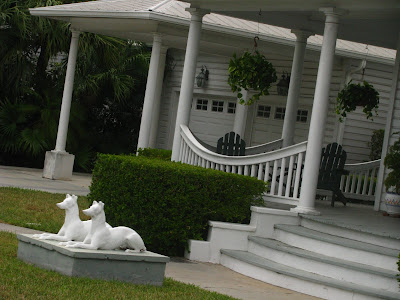 I prefer my dogs live rather than turned to stone. It is interesting to me that recently Key West has been noted in the newspaper as being the object of a craigslist scam wherein people have been advertising private homes at non existent adresses for vacation rentals. Guess what? The cheapskate renters lost their deposits! Use reputable known rental companies to do it right. It seems obvious to me but not to our Governor, the man who ran the corporation with the biggest fraud conviction in corporate US history. And a majority of my neighbors thought that was an excellent resume on which to elect him to run the state. Little wonder I prefer dogs to people. 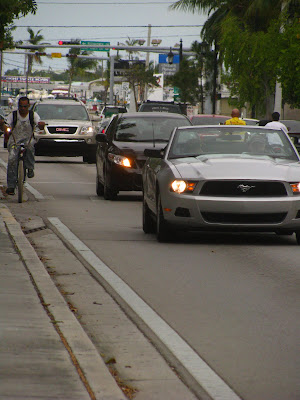 I think I also prefer facing the wedge of traffic on Truman on a motor bike rather than a pedal bike. If I were cycling I'd avoid the main street into town and take a side street, Catherine to the south or Petronia to the north...there is no bike path here on Truman and the sidewalks are awkward with numerous decorative lamp poles (in Florida bicycles yield to pedestrians on sidewalks). 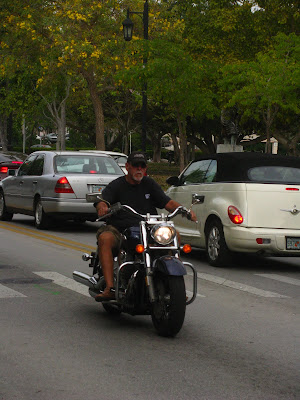 It is amazing how much traffic there still is in Key West this spring. I have been reading about snow storms still peppering the north. That sort of news keeps people down here, for a little while longer at least.
Posted by Conchscooter at 12:01 AM

"Chuck on Fleming, currently working at being an engineer overseas, told me modern cars have a limited lifespan by design"

I would dearly love to show Chuck my 1995 Ford Escort station wagon, which now has 187,000 miles on it. It starts on the first turn of the key, and will go 80 mph all day and all night. The interior, especially the plastic bits, looks about the way it did when it was new.

I would next take Chuck to NE Portland and show him the many (many, many) 20+ year old Honda Accords and Toyota Camrys running up and down Sandy Boulevard.

The famous automotive journalist Brock Yates once famously said, "They don't make cars like they used to. They make them much, much better."

It's not the mileage, but the summation of exposure to UV rays which kill a car these days. Here on Guam, a car is quite dead after ten years; the plastic cannot take 13 degrees N latitude for very long. In the gray Northwest, plastic is spared the horrors of UV degredation.

When my parents die, I'm inheriting their '29 Ford - no plastic; will run indefintely. Waay more miles on it than any Escort - and when well tuned, it will start with a hand crank.

That is endurance. I want to live long enough to see that car's 100th B-day.

Originally from the Motor City,

All of which explains (or not) why I enjoy night shift. By day the Bonneville is in the shade under the house and by night it's in the parking lot at the police station.
riepe wants to know when you are coming home chuck. I hadn't the heart to tell him, poor weepy Amish boy that he is...

You enjoy the night shift as it allows you to come and go unnoticed at the police station, where your name is carried on the books as a registered informer.

Noting the size of the average Key West love cottage, how can one of these places offer 4 apartments, if the occupants aren't circus midgets?

I can see how senior citizens would get very upset to discover the cemetery gates locked. Many would panic, thinking they were to become the primary ingredient of "Soylent Green." (That'll be one for a lot of folks to Google. Edward G. Robinson was still alive and played a part in that movie.)

I could see staggering out of a bar late at night and attemping to ride home on the bike rack in photo #11.

It is my understanding that one will be able to rent the entire state of Florida on an hourly rate after the US government closes tomorrow. Rumor has it that Mexican Drug Lords are gowing to push the southern border as far north as Omaha as soon as the lights go out.

Please don't tell me thst Chuck has moved to Guam in an effort to escape the police state of Key West... Where police informants come and go in the dead of night?

Speaking on behalf of my kinsmen and colleagues, your speculation as to the disposition of our mailbox arrangement was both misguided and hurtful to people in our circumstances.

So fuck you and all the "biggers" who make fun of us.

What happened to the rest of you? Got lost exploring riepe's ass?

My name is Beauregard Pettigrew, the last scion of one of the oldest family names on Flathead Key. The Pettigrew family has been the cornesone of the FFFFK (Finest First Families of Flathead Key) since 1632, when my Great-Great-Great Grand Daddy — Sir Walter Pettigrew — traded two quarts of sour gin with the local native Americans for eight of the Keys and three women ranging in age from 12 to 16.

Havng gained the tribe's trust, he enslaved all of them the following year, selling most to a better life in scraping guano off the neighboring islands. (Dissolved in water, guano is the preferred pigment for government documents pertaining to accomplishments and overall benfits delivered to citizens.)

The statues of the two dogs are on the lawn of my ancestoral home, which is modelled after "Tara." These sculptures are a monument to a deceased mother-in -law, who was mysteriously ripped apart by feral dogs, after being tied to a tree and covered with pork chops. Her death was attributed to "natural causes" as there is no telling what hungry dogs will do in desperation.

Otherwise, nothing would eat her.

If you can't say something nice about a person, than you shouldn't say anything at all. Or are you too stupid to know that?

this is better than a soap opera

Dear Shirley,
riepe's ass is a very commodious and pleasnat place to be. I know_ i've been there.
Your loving grandson
awaiting his inheritance.

I really have nothing to say to that last remark. I think Key West is starting to get to you.

Michael--
As a guy who woke up on Key West this morning, and now finds himself knee-deep in the drama of SouthWestern West Virginia...let me tell you this.
If you go over by Casa Marina Resort, you will find the loveliest old Harley-Davidson (I am aware of your repulsion to such make...I share it).
However...
It is rusted, full of patina, just yelling that, "Hey, I have been on this island a long time, dude."
It's pipes are rusted, its gas tank suitably dulled by the sun and time.
It is remarkable to see. Usually parked right in front of the Casa Marina, black tank with rusted chrome pipes. Can't miss it.
I already do...