Cheyenne takes it all in stride but I find Key West bicycles to be objects, if not always of beauty they are frequently objects of curiosity. I love to see two wheelers decked out for practical purposes. 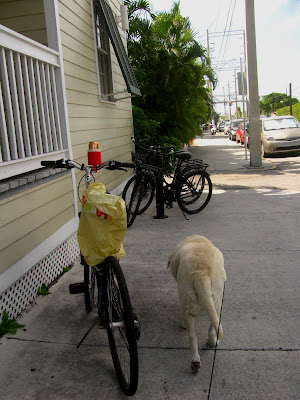 This one had a cup holder (with a coke inside) and a plastic shopping bag doubling as a seat cover. I read a story in the Citizen some time ago about a woman in a dispute with a builder and left in the lurch she was living underneath her half repair home, which was suffering from severe hurricane damage from years ago. It was the strangest story about how she slept under the house at night and spent her days hanging in the park as the structure was essentially unsafe. Seeing this half built home reminded me of that story for some reason. 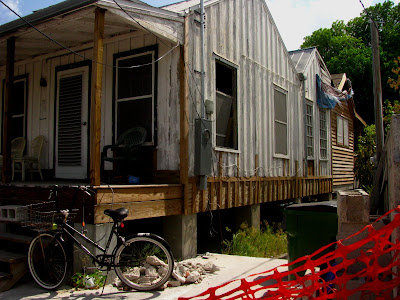 Perhaps it was the homely touch of the bicycle leaning up against the front of the house. One thing that does tend to get a bit annoying is the cluster of wires always drooping overhead across the city. Some people photo shop the wires out of their pictures but I don't know how to photo shop and I don't really want to learn. This is Key West as it is: 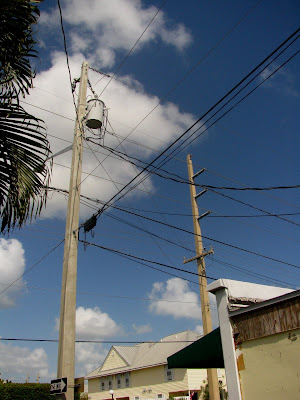 From time to time people suggest burying the wires but in our current state of anti public spending that doesn't seem like a very practical idea. These days the county has no idea where to find the money to build the mandated sewage system for the Keys that don't have it. Never mind something as esoteric as burying unsightly wires so we continue to "treat" sewage in septic tanks built into porous rock. School cut backs are all over the place except in the ongoing debate over the height of the new old school. With all the kerfuffle about the extra tall building at Horace O'Bryant School one tends to notice taller than average buildings anywhere these days. 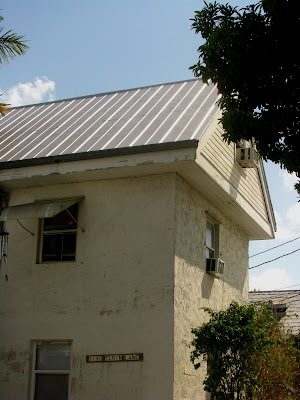 But in the end we see what we want to see on the streets of the city. 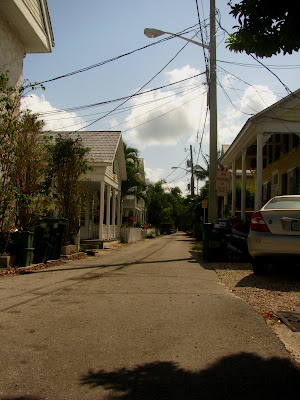 It's true there are wires overhead but the buildings and the trees make up for it with their own historic beauty. I enjoy having electricity and I suppose wires are the price we pay.
Posted by Conchscooter at 9:01 PM

Funny, from years of city dwelling where the streets were lined with poles, I never see the wires anymore. Yet the street we live on has them buried, and the absence of poles makes for a nice effect.