Not Walking With Doug

I was standing at Mallory Square, our starting point, a couple of hours after I took this picture and there was Doug and his dogs, he of This Week on the Island fame and we stopped and talked for a minute. Doug likes the Key West weather and he likes to make a funny about our good fortune, so yesterday he remarked that at least you don't have to shovel sunshine... 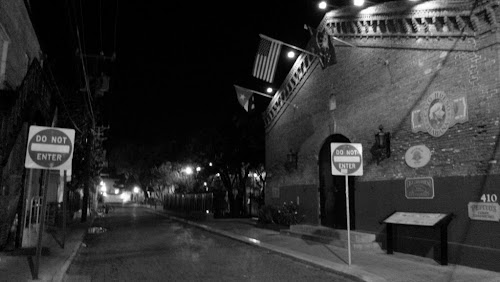 We reminisced about the first time we visited Key West, he in 1971 and I in 1981, and oddly enough we both got the same impression of this town. Doug laughed at the memory of the "dump" he brought his new wife to visit on their honeymoon. It was the end of the road he said as the shrimping fleet had gone bust, an early victim of cheap foreign competition, and the Navy was pulling out. Duval Street was mostly boarded up waiting for today's land moguls to step in and buy up the crumbling street in an effort to revitalize the dying town. They did just that and are today's one percenters. Happily for all of us their gamble paid off. 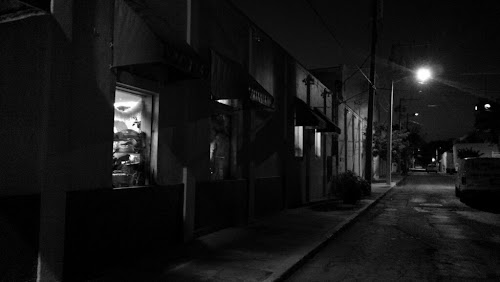 I was walking past Ann Street chasing after my dog who was in pursuit of something irresistible. I looked to my right and I thought I saw a shadow move away from the darkness, sloping shoulders under a fedora shape. Was it Sam Spade..? No, that can't be, Spade just ages me. Dashiell Hammett isn't fashionable, I'm pretty sure. I'm not even sure Bogart has survived the passage of time. Sometimes when life seems so uncertain you just feel like saying it out loud: "Oh, F...!" 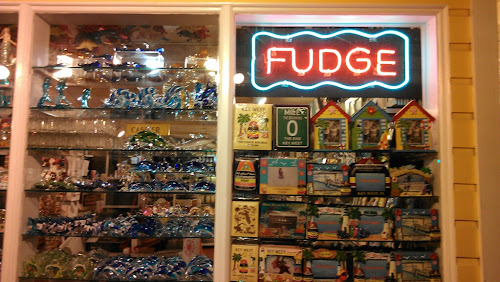 And then there it is all colorful and illuminated and everything just for you. A big red sign telling the world how you feel about it. Then there's Cheyenne. She doesn't care how uncool I am, she's too busy finding the last pizza crust abandoned in the last flower bed left in the Southernmost City. You have no idea what it takes to rein in a hundred and seven pound Labrador intent on food. 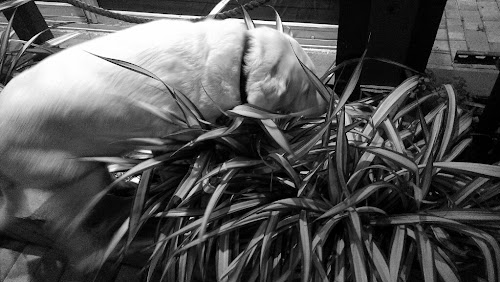 Doug came to Key West to live when he retired and he was ready for the change. We stood there in Mallory Square watching the pigeons watch us, wondering how it was we backed into this life. His new dog Tyler was the latest find in a long line of Husky rescues Doug has performed. Young Tyler was tugging at the leash, Cheyenne for some reason was watching me with other dogs and showing neither impatience nor jealousy. Hmm, is she cheating on me? 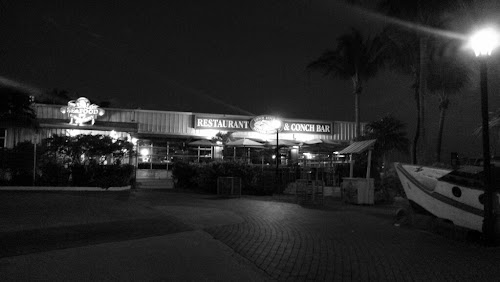 I think she spent a lot of time in a cage, Doug said. I said Cheyenne had the same impatience to see and smell everything when I first got her. Come to think she hasn't changed much. You love that dog Doug said smiling at me like he is immune to the same syndrome. We're suckers and that's that. 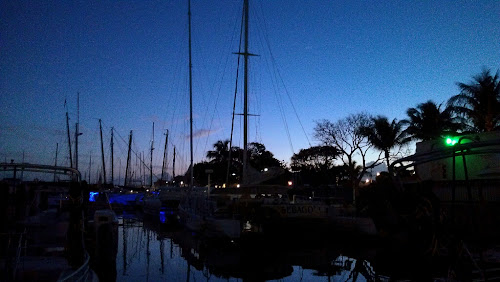 The thing is Key West is a town that just pops up in your face and says 'what do you think of that?' A construction site has beauty. Or it would if my dog slowed down enough to contemplate it. 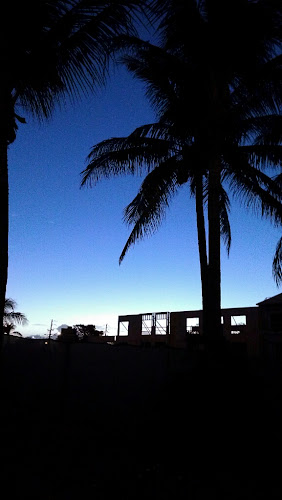 Keep Out. I'm really glad that sign was put there on the junque truck next to Turtle Kraals because I was almost overcome by a mad passionate desire to climb in among the rusty crap in the back of the rust bucket truck. Phew! That was lucky. 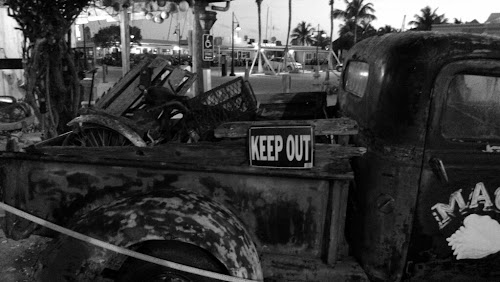 Psst! Wanna buy a luxury home? Here's one for you...well soon. Ocean Breeze they call it, which seems suitable considering the skimpy walls so far, but in point of fact... 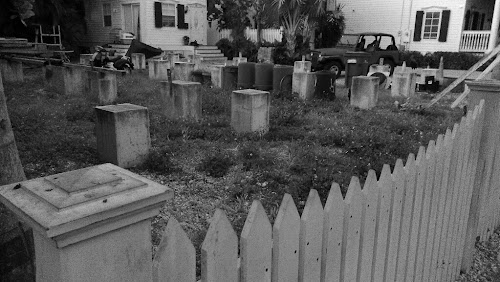 ...any chance there was of a breeze around here was killed pretty effectively by the parking garage across the street. The view every luxury homeowner demands. Key West expects a lot of its millionaires - what do they want from their mansions - actual views? 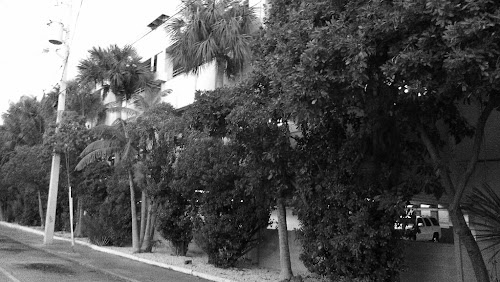 I was struck by this sign which advises the world that being deprived of draught Smithwicks after two in the morning might be cause for stress. I think I live a deprived life, as I have never felt the lack of beer at that hour of the morning. Mind you they are sorry they might be inconveniencing me which makes me feel good. Bloody right they are inconveniencing me. I might just start needing Irish beer after two in the morning. 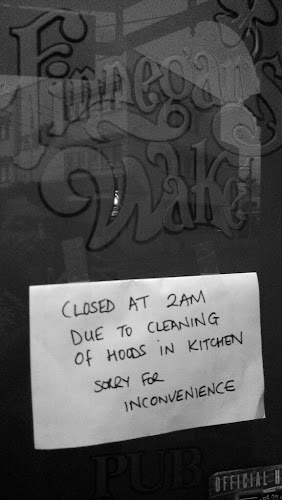 Well, Cheyenne and I ended up on White Street before we ambled back to Mallory Square. It was a good walk. And then we had Doug to talk to before we went home. 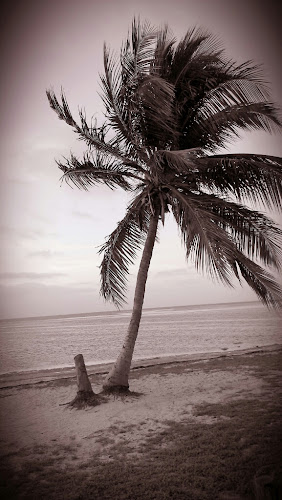 Later I sat under a palm tree and looked at the view. Then I went home again, this time to dinner. No need for a sweater all day as Doug might say with his infectious grin.

That sunshine is looking mighty good about now. We have 10 inches to shovel.

Nice B/W photos. They seem to fit with KW.

Still like the video of Doug dancing with his dog...tell Doug he should add to his resume on his blog
"rescuer of numerous lost dogs of the husky variety..."

Cheyenne weighes 107 pounds? Yikes, she is more than just a wee bit heavy however she is her own person so to speak so we shall not be concerned.

The mootone photographs are
something different, please continue.

Does your wife still approve of the FIAT? And will your local mechnic be able to service the FIAT as needed?

Minus 16 Celsius here in southern Ontario, with the wind chill closer to minus 24, and much snow on the ground.

Trobaritz: you came too far south. But if you were going to leave the socialist shackles of Canada Oregon is definitely not far enough. There's a lot to like about the Beaver State but not the weather.
Dear Richard B/W actually suits Barrow...they are my attempt to cheer you up as you dig your hack out from a snow drift. Only what, six more months till summer?
Bryce: Labradors like Americans run to fat but she walks a lot, she is healthy despite all assurances that her lifestyle wil kill her and she is happy so I am not going to worry, nor am I going to impose on her that which I shan't on myself! My wife still likes her Fiat and oily says he knows all he needs to know to keep it on the road. Strangers feel moved to tell us what a cute car it is as they haul themselves into their SUVs.