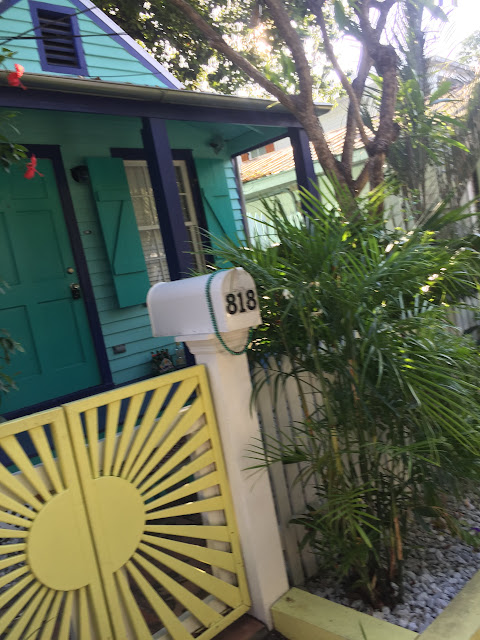 I took a wander along Petronia and Olivia Streets on a sunny afternoon, enjoying the brights colors of Key West. Petronia is named for Petronia Martinelli Wall and she was the mother of Olivia so there are a few street names taken cae of in Key West's genealogy... 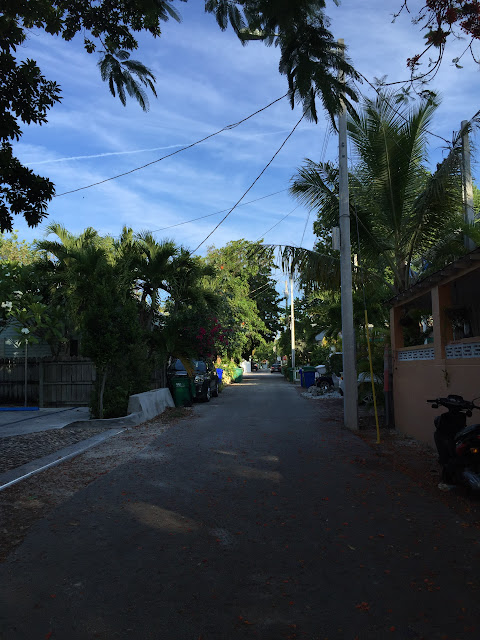 I take pleasure in the shade of large trees and this year the newspaper is carrying a ton of comments about the city's tree commission failing to protect them. Just by my reading it seems to hate mail about tree cutting is out stripping the anger over cyclists and parking combined. 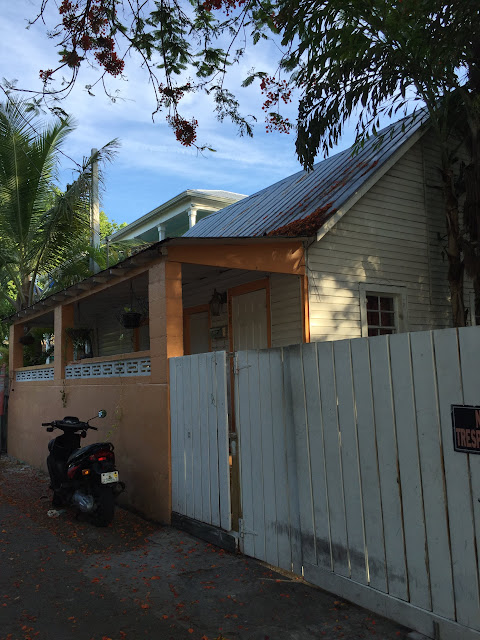 Some days I feel like key West will erupt into civil war, most uncivilly over parking or tree cutting while the rest of the country hunkers down and opens fire over religion or politics or some other perceived slight. Rusty and I say a pox on all their houses. 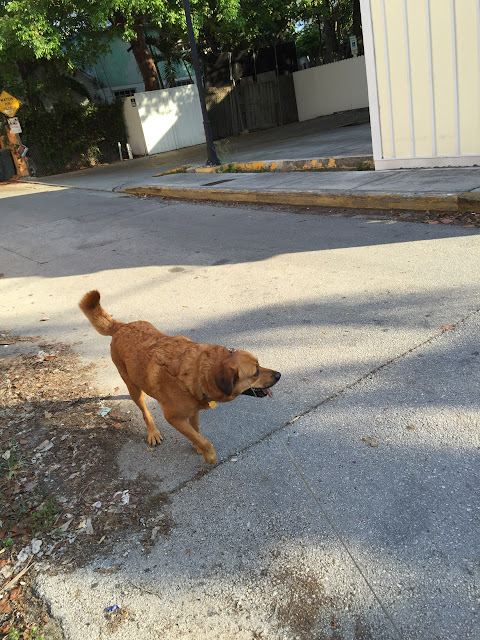 The Blue Macaw (LINK) is relatively new in Key West and I've heard people like it. It looks good if you are into the bright theme that appeals to me and the indoor/outdoor seating with live music and greenery looks to be very pleasant. Checking the menu I was surprised by how many vegetarian plates they offer in a  town that hasn't embraced the concept as imaginatively as one might like. 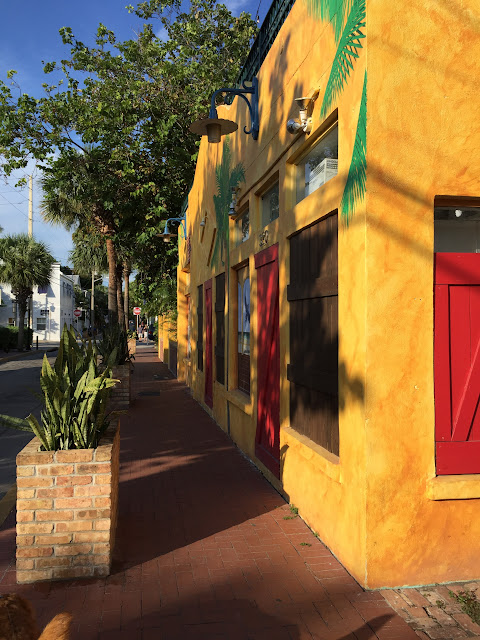 Rusty is getting much better around people and vehicles and crowds that are not too thick. I wanted to go to the Gay Pride Parade with him and watch from the sidelines but it was a large crowd that filled the sidewalk, even to the end of Duval and I couldn't justify putting him through that. So we walked the back streets and worked up a sweat. 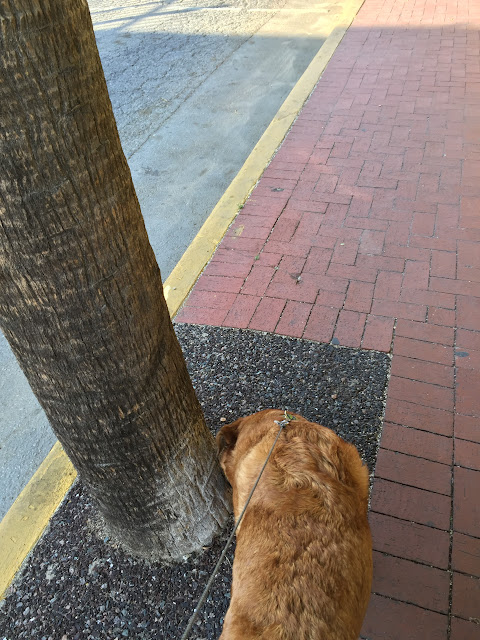 This building on Petronia's 300 block used to be an iconic barber shop and now it's an art gallery, a fine symbol of the transformation that is sweeping Key West. 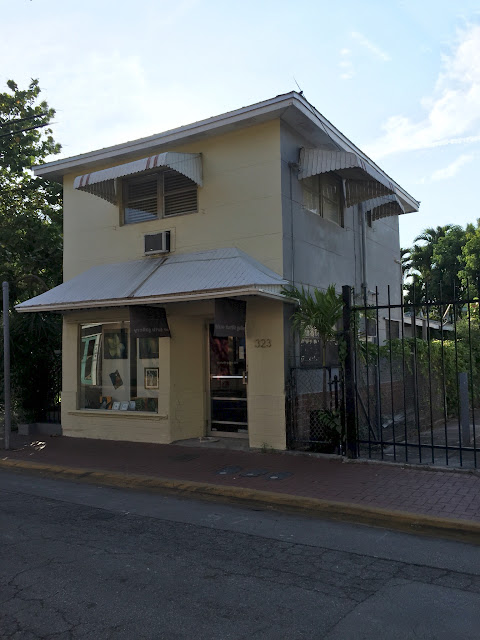 The exterior has changed juts a little but the interior changes are profound. Recently the city commissioner representing Bahama Village, Clayton Lopez was lamenting in the newspaper that only one business on Petronia Street is now black owned. He is trying to figure out ways to increase African American entrepreneurs in Bahama Village. 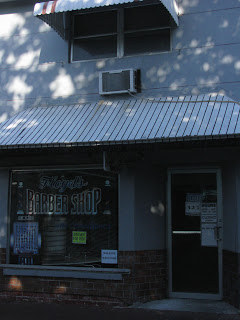 Looking pas the public housing on Whitehead Street north towards the AME church that looks so imposing. A symbol perhaps of the endurance of the community that surrounds it, pressed on all sides by money and gentrification. 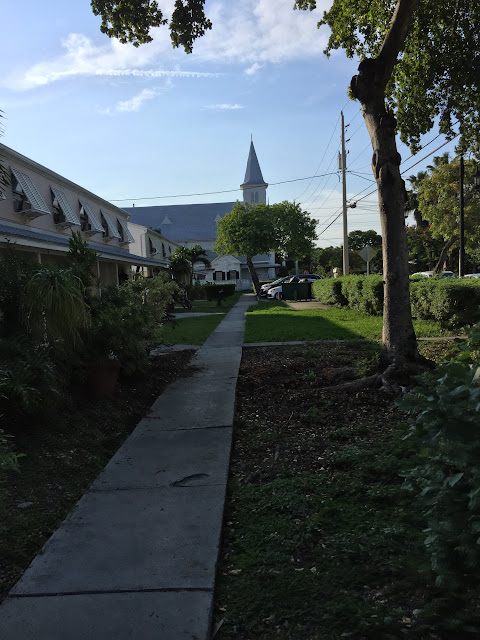