MIAMI BEACH — On the first day parks and marinas reopened since the coronavirus shutdown, Miami Beach police issued 652 warnings to people who weren’t wearing face masks and had to remove 145 people from parks after closing time, city officials said.
From the Associated Press last week.
I wonder what we will think of these signs as we try to put the lock down of 2020 behind us. I also wonder where Schooner Wharf scored toilet paper to make such an outrageous and generous offer: 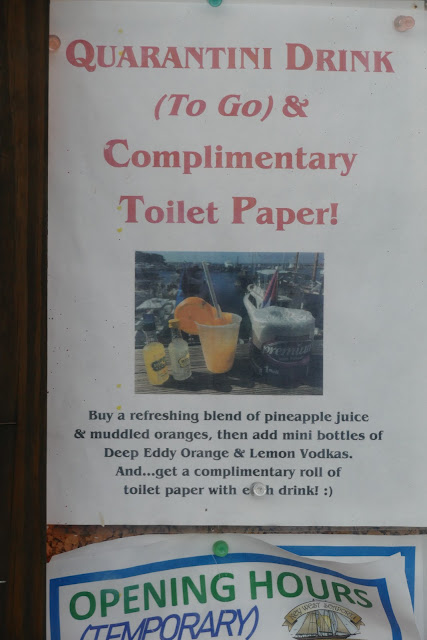 Toilet paper has reappeared of course, only to be rapidly scooped up apparently. Meat is next on the endangered list as our formerly all powerful nation rattles and squeaks from crisis to crisis. The roads into the Keys remain closed, both of them, to outsiders so the re-opening of restaurants and other businesses, not bars and gyms though, is for locals only at this point. 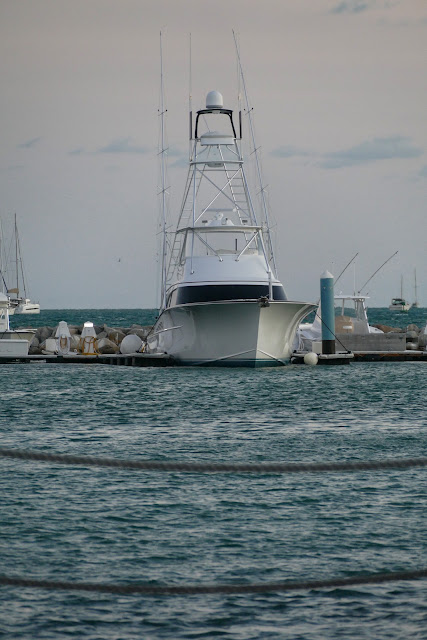 I don't really get what is happening and though I read many harsh angry comments on Facebook about everything I find myself unable to find hard facts about anything. The state of Florida is not reporting virus deaths anymore, conspiracy theorists argue this all political and I feel as though I am a n involuntary participant at the Mad Hatter's Tea Party with Alice. 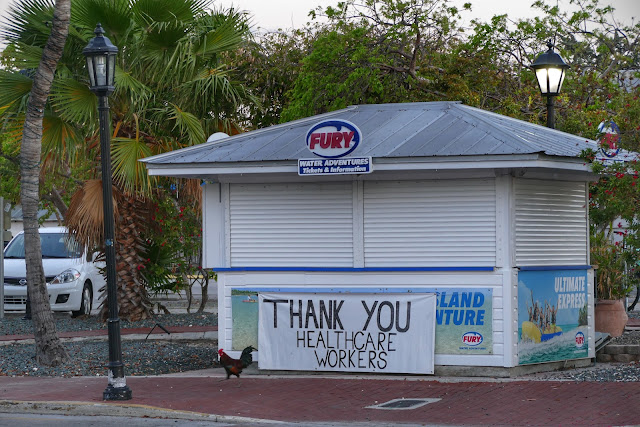 So I find myself looking deeper inward at this time. I stay close to home and I walk Rusty wield my camera and rejoice in my wife's newfound ability to cook beans easily in her Foodi Instapot. She can take dried legumes of any type and after re-hydration overnight have them cooked and sauced and full of flavor in less than half an hour.  I am finding myself somewhat indifferent to threats of meat interruptions. We are stock piling treats for our carnivorous Chief Security Office (Van, for the use of) as Rusty cannot seem to grasp the complexities of supply chain interruptions. 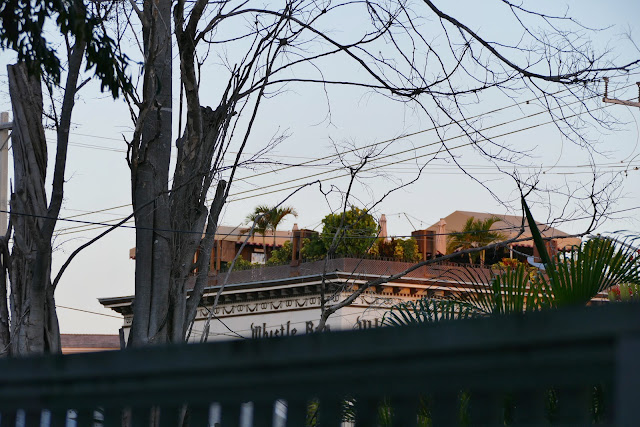 I find myself looking at these pictures, the last of my lock down series, with some small sense of nostalgia already. In essence a face mask, some sanitizer and your choice to stay home is pretty much the rule these days. Groups of no more than ten, stay six feet apart from people you don't live with and have at it. I have heard rumors of some businesses closing but the reality will settle in later. Key West has a long history of people and businesses coming and going. The debate over the value of the lock down will continue but it is a debate I do not participate in. 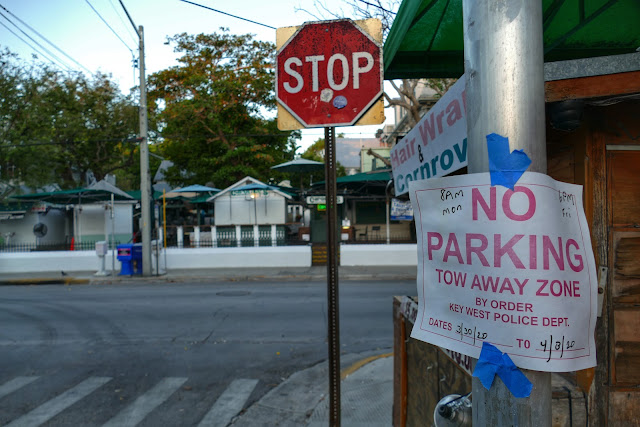 For me having a job, even with overtime cuts, means the urgency of re-opening is muted. Indeed we already find our call volume increasing at the 911 center as  people  take to the streets.  I have always had issues with the idea of being locked down with no financial support seems absurd. Italy was able to shut people indoors for eight weeks thanks to government funding and a shut down of most debt enforcement mechanisms. Plus health care is freely available to all so there are worries about losing work and health insurance. All of which make s a lock down bearable to some degree. 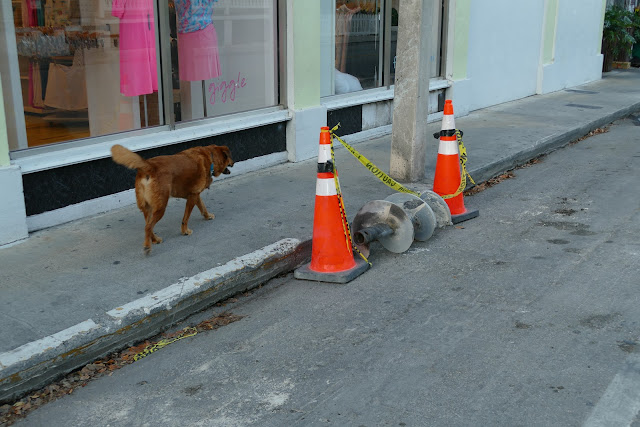 Personally I think it's a bit rough to tell everyone to shut down when we already know most people have no financial reserves and then we read about large companies getting all the bail out money shoveled at them to add insult to injury. I'm really not surprised people are protesting the lock down. That they are doing so instigated by political groups with another agenda doesn't help things. What has impressed me is how level headed and rational most people have been in this impossible situation, acting with restraint, wearing masks, keeping their distance and being quite civil at least in the Keys. I ignore Facebook and all its bad manners, what I see n the streets is much more reassuring. 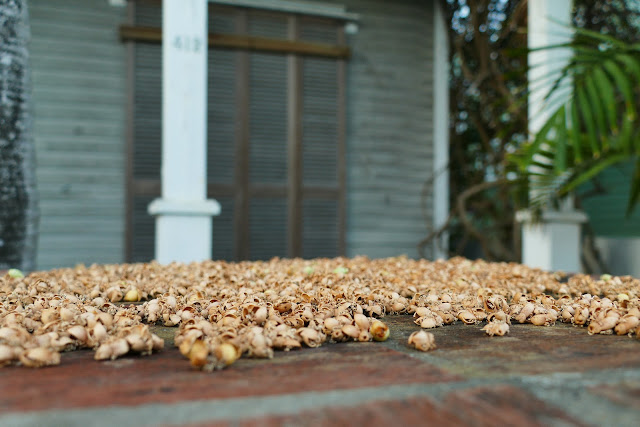 I'd like to hope after this over, whatever that means, that we see more effort put into hiring people at home, paying well and producing stuff our country can export to the world. It used to be so, and American machinery and industrial products were a mark of quality and reliability.  I refuse to believe doing things right, doing them at home and employing our own people will pout shareholders on the street or executives in the poorhouse. I think the virus has made me mad. I see the possibility of a better future. An American fture ina world grown weary of crap.
Posted by Conchscooter at 12:00 AM

Regarding meat becoming endangered- I'm a reluctant vegetarian, so having beef & pork disappear won't change my menu. For those that just can't imagine life without beef you might want to give Beyond Meat a try. It's been 7 yrs since I stopped eating beef, but based on my recollection they've done a decent job capturing texture & flavor. Not identical, but it might be good enough to get a person thru the meat-famine.

Layne stuffed peppers with some meat substitute last night and it worked fine. I don't think Rusty will take to tofu.

I just started reading your blog and I'm LOVING IT. I haven't been to KW in 20 years, and once the lockdown is over, KW is the first place on my travel agenda. Love from Toronto. Oliver

.....the brown race is being born!
Those in the kitchen are testing positive and the privileged class wants them cured and silenced for steerage!

It ain't a gonna happen.

I totally agree with your observations, and hope for a better tomorrow. This is challenging to say the least. Watching people who put everything they had into businesses wringing their hands in worry is pretty sad. Not sure what an acceptable outcome is. Getting the feeling that no one knows. Take care.

The weird part is when you realize the people with all the information haven't got any more understanding than you do. I could just as easily head the coronavirus task force because I haven't a clue about any of it.

Jolly good Oliver. I will make you insane soon enough. This is Key West far from sunsets, beaches and bikinis. I apologize in advance.

I am a gay man and I understand unbiased hatred.

Never mind the facts of this pandemic as they readily morph into that monkey called "alternative facts."

One never remembers the facts. What they do remember is the circumstance.

It helps to check in with your heart. If that means nothing then take a good long nasal breath. And baby, it stinks indeed.

Thank you for your comments on my post.
I am trying my best to honor my Great Aunt's favorite line: "Stop looking for an angel and start being one."

It really is the best I can do.