It's been just over one month of travel and the feeling of vacation hasn't yet left. I caught Layne yesterday on her phone measuring distances and checking Harvest Hosts between here and Austin so I think her feet are itching just as much as mine are. 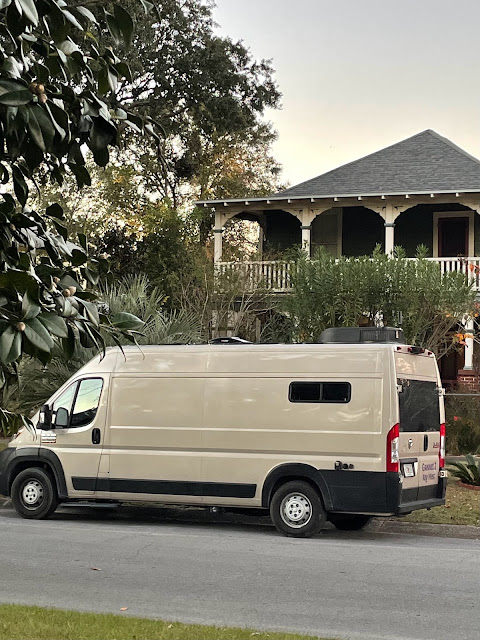 Therèse lives in East Hill, a community set on an actual prominence, as close to a hill as you will find in the Florida sandbox. Take the correct street and you can get actual over the water views from high above the tideline. Not a bad place to be when the inevitable hurricanes push water up the Gulf of Mexico onto the beach. 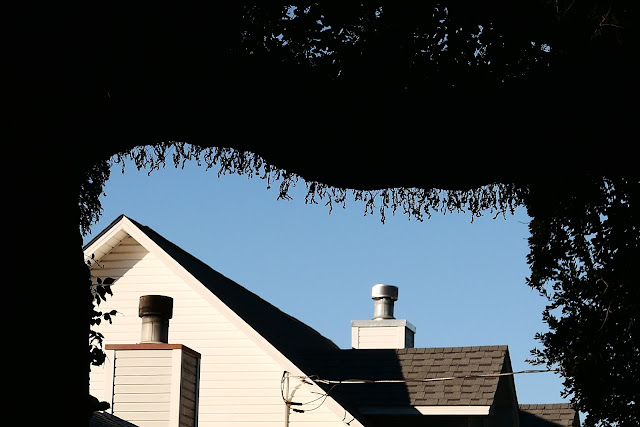 The other good bit about this neighborhood is the variety of architecture and the abundance of plants including extremely large trees. Rusty quite like the walks as do I. 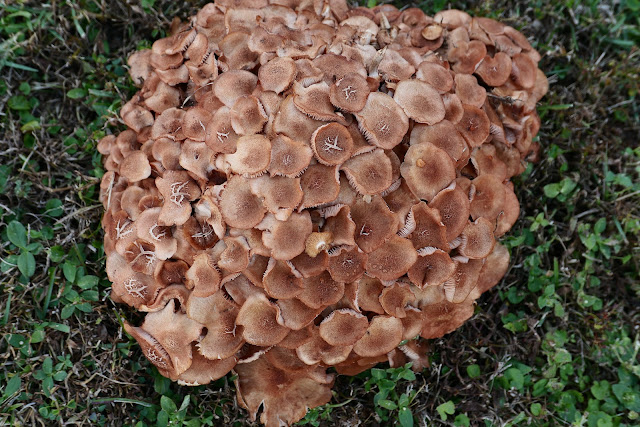 Therèse is an avid gardener so it came as no surprise to see grapefruit sized lemons hanging in her back yard. She settled in Pensacola a decade ago as her roots in the US were in Alabama (which is her team...) but Pensacola offers beaches, Florida sunshine and no taxes, the sorts of reasons I can agree with, especially after a subfreezing week in Chicago. The weather is actually quite mild by Florida standards with actual frost in winter from time to time and bearable summers for the less heat adapted among us. This is decidedly not the land of mangroves and coconut palms. 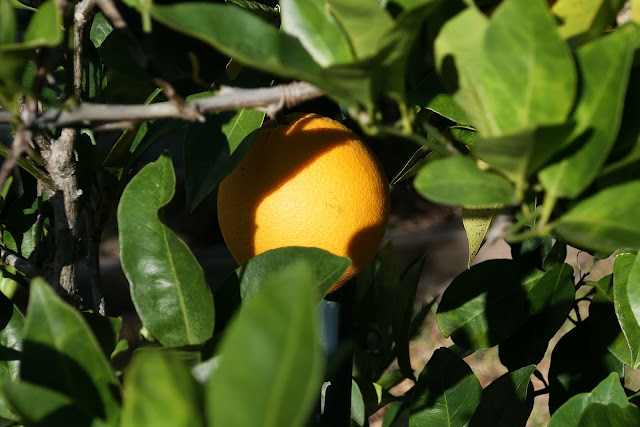 Rusty rather likes the stillness of houses. Layne said she was glad we have lots of Hilton points as we may have to give the little runt a break in a normal bed from time to time. I have to say though he is eating well, sleeping long and hard and is always ready to go and see what's what. When we arrive someplace he likes to get out of the van immediately and then he settles outside curled up watching the world go by. 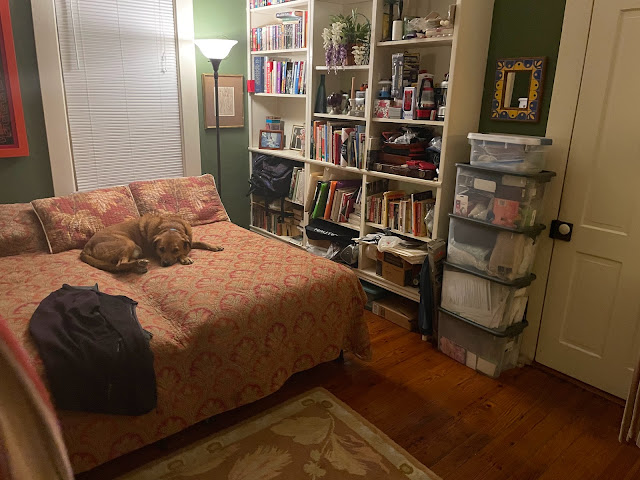 A case in point: he was stirring around six this morning in an unusual display of early morning activity so I got up, this is Florida after all and not by any means cold on a sixty degree morning (my standards have plummeted since Chicago and the snowfalls) and we too off for the Graffiti Bridge on the shores of Pensacola Bay. It's an informal free speech spot that has grown into. tourist attraction of sorts. 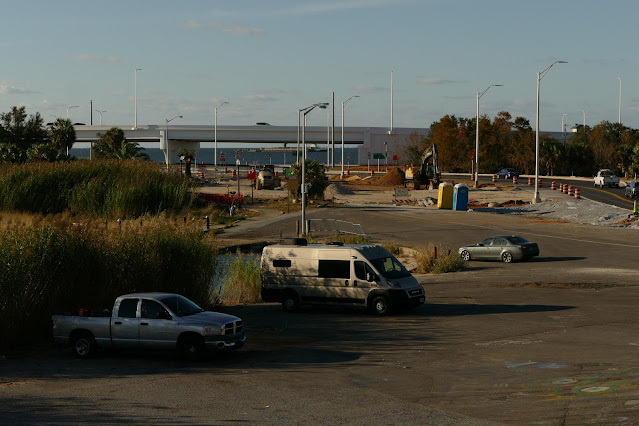 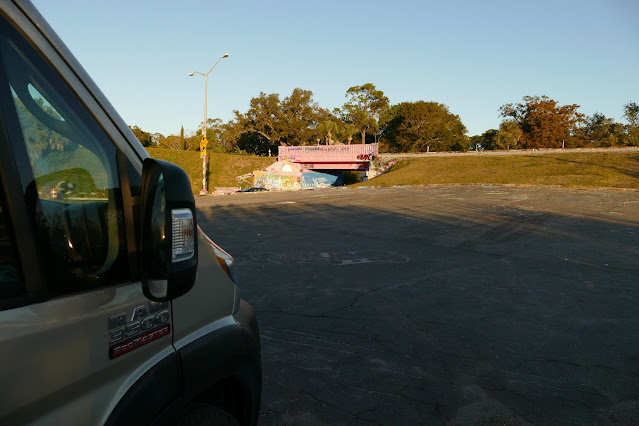 The bridge has been painted a bilious shade of pink in the style of a Pepto Bismol advertisement which is slowly succumbing to the blandishments of the spray can brigades. With a little convincing I got Rusty out of the parking lot which is apparently filled with interesting smells and we got busy Wirth the business of crossing the bridge. 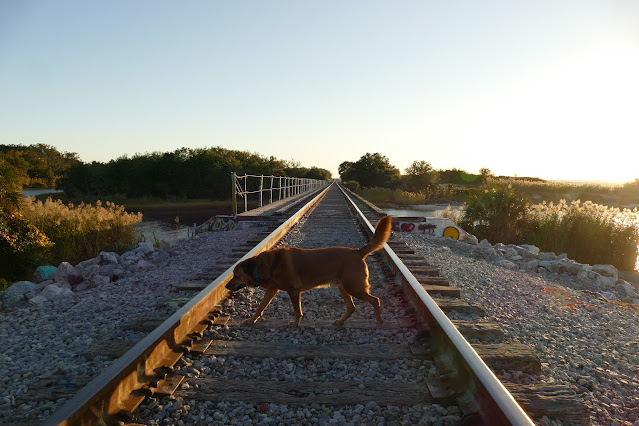 We have been here in years past but this time we took the trail on the inland side of the tracks wandering through a shady wonderland of no people and no noise. Rusty lost his nerve a bit at one point but I walked ahead and he followed along. He is learning to not be scared of strange places which is one more step up the ladder for the dog abandoned in the Everglades. I was always amazed by his comfort levels running through the impenetrable mangroves in the Keys followed by his fear of falling leaves in deciduous forests... 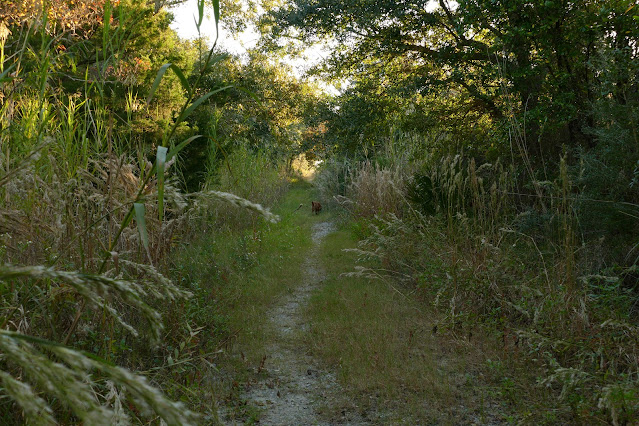 Winnie the Pooh might have described it as a blusterous day, not too windy in point of fact but there was a decidedly cool breeze coming off the bay. 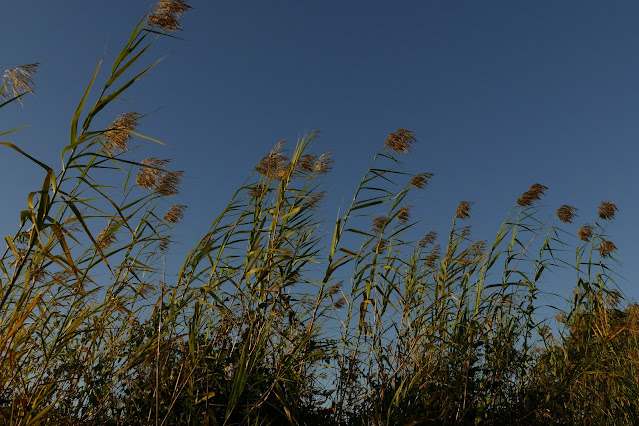 We walked alongside the railroad for a bit until I could hear waves beating on the beach on the other side and we then climbed the embankment to look over the top. 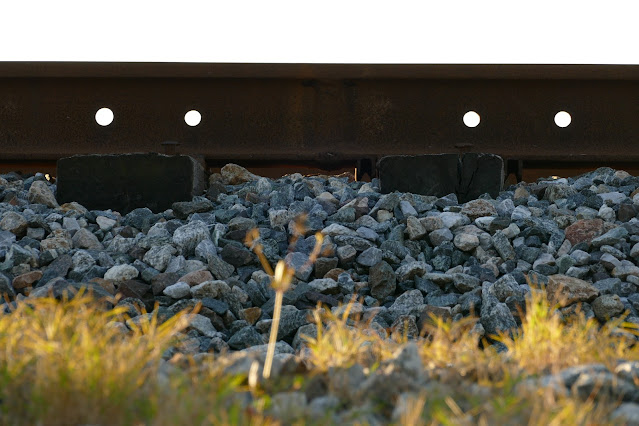 The small brown dog blending in. 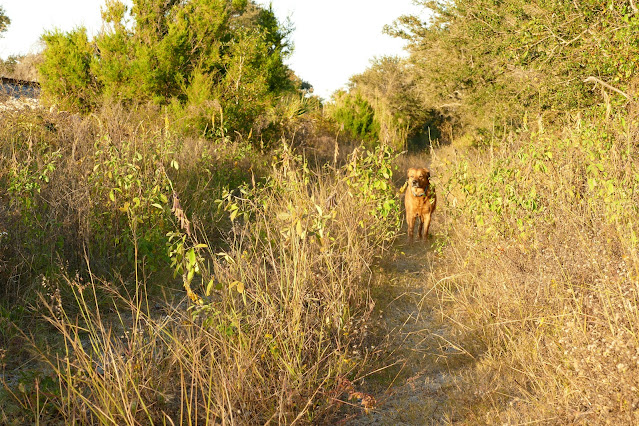 This is why they call the place Hobo Beach. Bums don't bother me but there again I am one now.  I met a man out here years ago and I signally failed to make his picture so I cannot be sure anymore who he might have been. 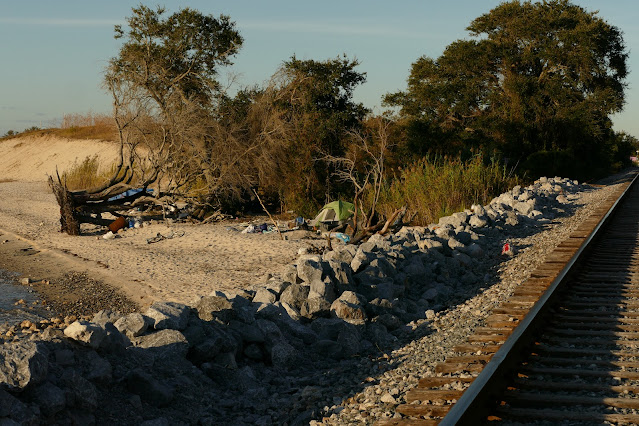 He was well spoken and had travel plans which we discussed for a while as our dogs. played around in the sand. Often homeless people are shy, angry, demented, needy or lonely but he came across as none of those. People with houses come across in similar fashion to me but few housed or houseless people had the presence of mind and serenity of this particular man living in a tent in the dunes. 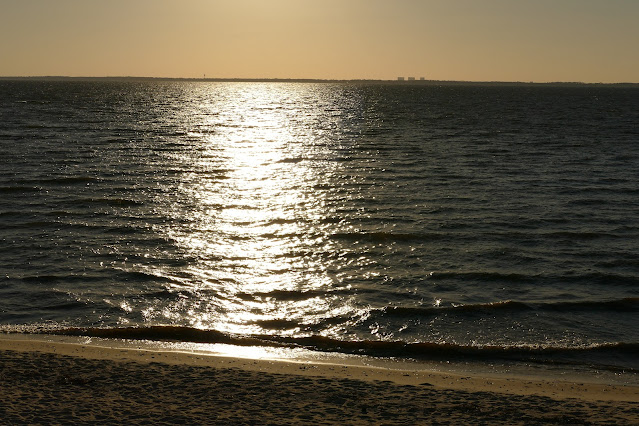 I looked him up on my next visit but there was no sign of him so I figured he was probably riding the rails somewhere, or living a new life somewhere else. This shack is roughly where he was living. I saw the occupant and waved. He waved back but he was young b blonde and not the old hobo I met before. 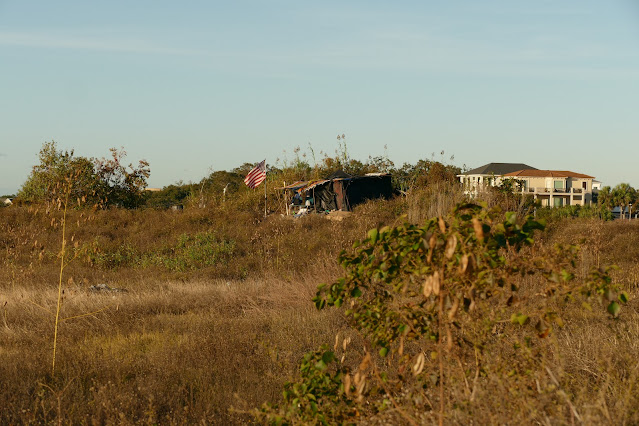 I rather think this bench, new to the site, revealed the answer to my little mystery. I took a seat and did some Googling. I am pretty certain this is my mystery man: Kent Stanton. Well worth a read if you click. 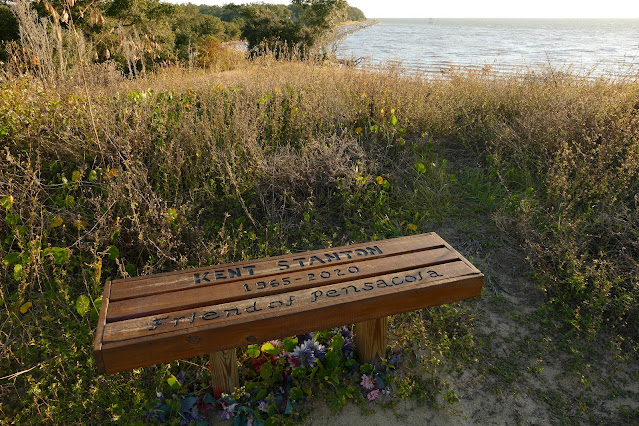 Things I saw wandering back to the van: 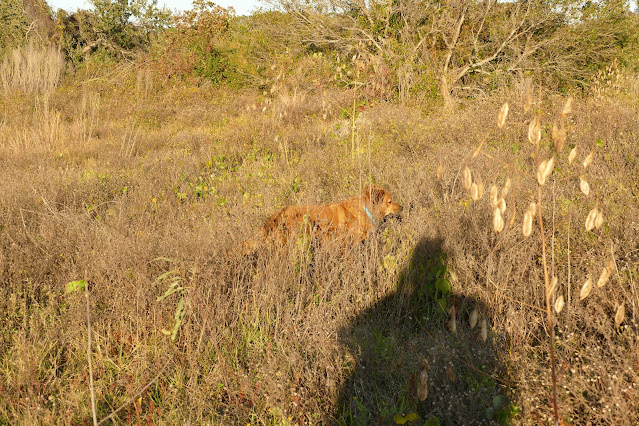 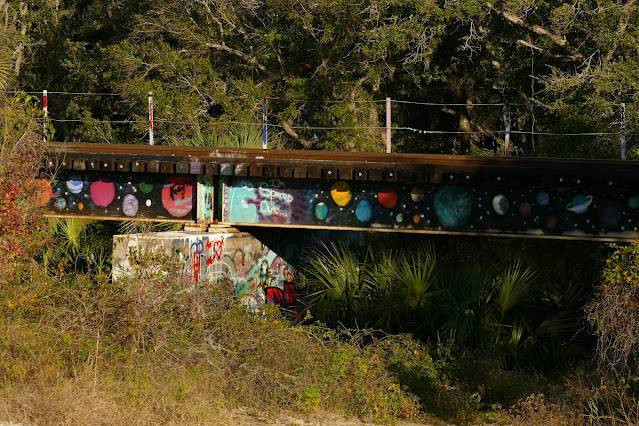 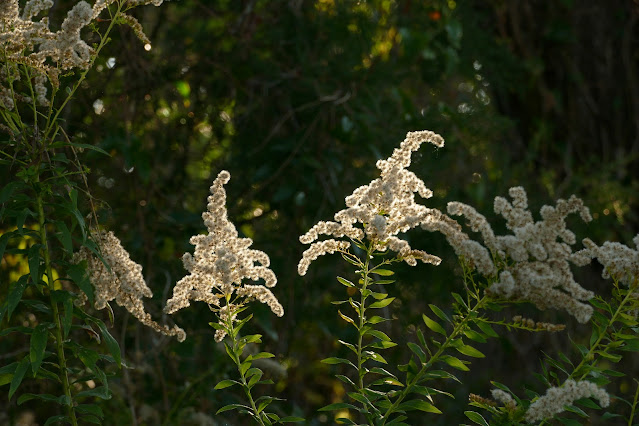 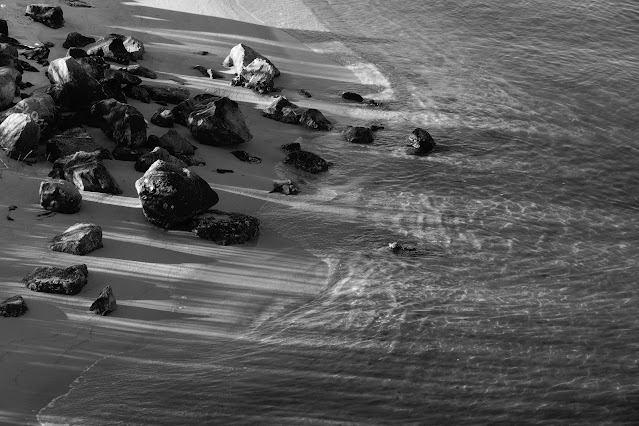 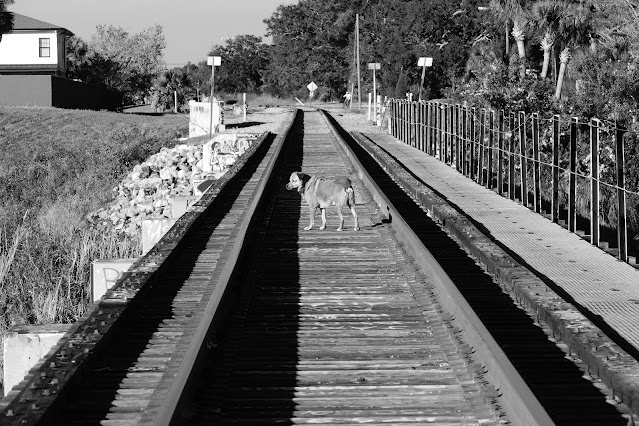 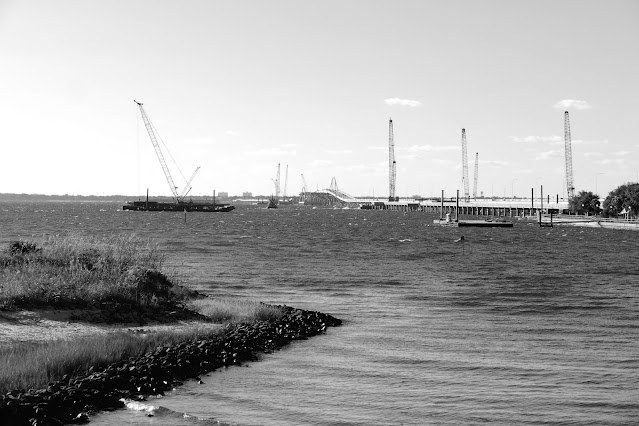 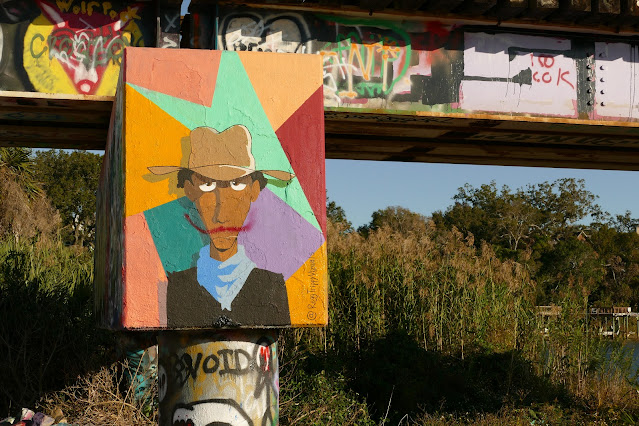 Hobo Beach seen from across the way at the waterfront park. 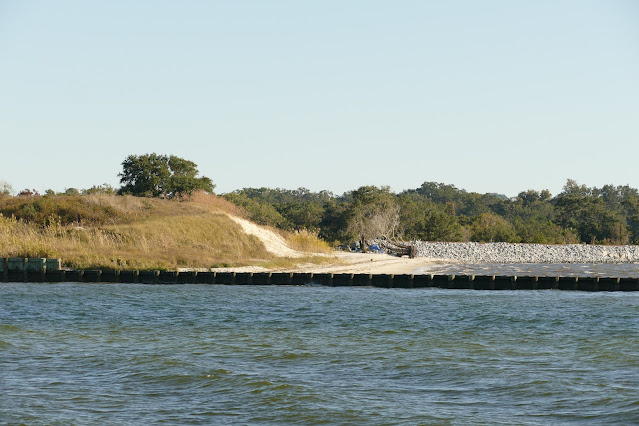 Posted by Conchscooter at 10:16 AM

I thought you were up north. I'm surprised to see you back in Florida...

Hey Richard: No doubt, me too. Portend.

I’m working on it. My wife has too many friends.

I really like that portrait on the end of the bridge cross beam... really well done by @ReggTrippyVizuals. Good eye!