Let's Go Pens! I have no idea what that means or why someone would deface a vehicle with those words. At first glance I thought it read Lets Go Penis! which seemed considerably worse. 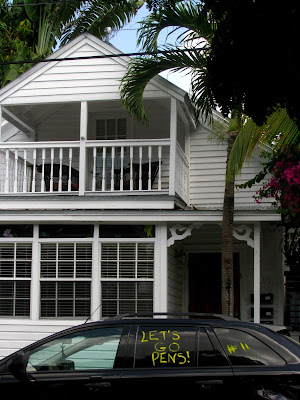 I guess it has some sporting theme to which I am not privy. I saw the boat in the driveway and thought it merited a picture, which on closer inspection makes it look like the frontispiece for a very disorganized yard. 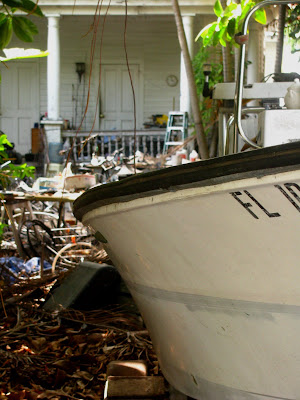 There are a million convenience stores in Key West and many of them have been around since Methuselah was knee high to a grasshopper, so one has to assume they make money but how they do it when there is a competing store a block away I'm sure I have no idea. 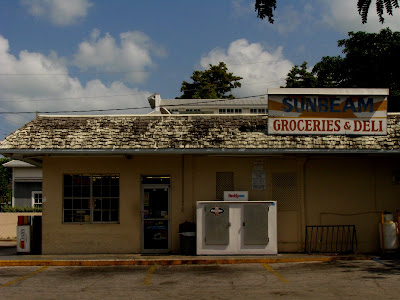 I like to call them inconvenience stores because, inconveniently they have to charge a fair bit more for their stuff. I read recently that the Navy homes at Peary Court are going to be sold. They are currently rented for around $2,000 a month for the former Navy Housing managed by Balfour Beatty contractors. They make pleasant enough suburban homes in a wide open, yet gated community. http://www.naskeywesthomes.com/subpage.aspx?cid=41&k=peary 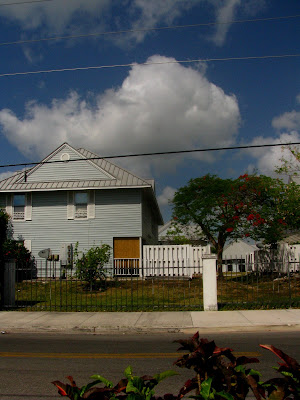 I wrote a full essay about the place when it was opened to civilians. http://www.naskeywesthomes.com/subpage.aspx?cid=41&k=peary They are selling the 157 homes owned by the contractor and the land owned by the Navy but they are selling it all as one unit which will exclude ordinary mortals from purchasing anything. One wag in the Citizen's Voice suggested buying back the 23 acres, razing the homes and restoring a park to name it after Harry Powell, the city commissioner who threatened to blow himself up when the Navy started proceedings to take back the open space and build on it. Taking the long view Commissioner Powell had a point.
Posted by Conchscooter at 5:01 AM

Let's Go Pen's! is in support of the National Hockey league Pittsburgh Penguins during the playoffs.

And there you are. Another of my cultural deficits exposed.

Just keep shooting photo's and writing the blog and all is forgiven.

I am writing as fast as I can! Pant, pant pant.