Webb Chiles Does It Again! 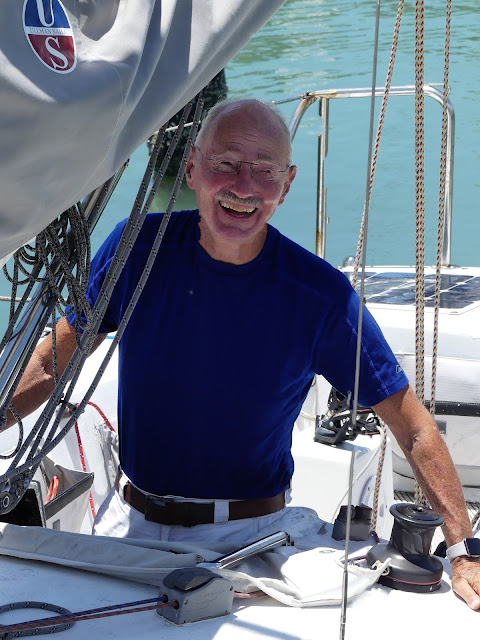 Webb Chiles is  77 years old and has just completed his sixth time around the world under sail. He is fit and capable and has proved an extraordinary point that I hope I can get across in these few words. He  sailed from South Carolina to Panama, crossed the isthmus with his boat on a  truck and then sailed from Balboa to San Diego in just about six weeks. He keeps a satellite tracking device on his boat which marks his progress across the face of the earth. 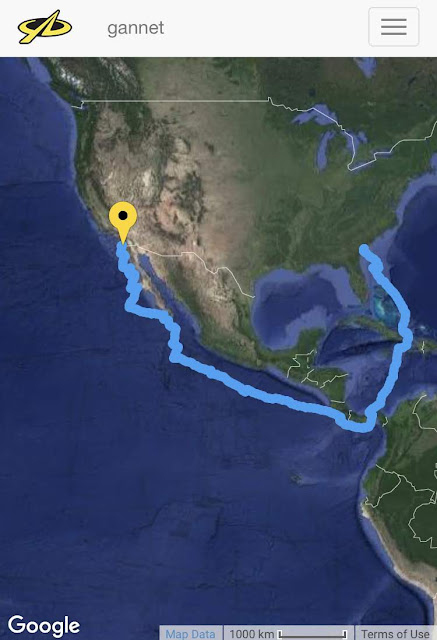 Chiles is very well known in the world of sailing. He has sailed almost the entire way around the planet in an open boat about which trip he wrote two books. He was the first American to sail alone around Cape Horn and he did that in an unsuitable boat that wasn't really up to the task. He however was, manifestly so. On this his sixth circumnavigation he took a 24 foot ultra light racing sailboat and sailed it where no one ever imagined it could would or should be sailed. And he did it with style. Frankly I'm still reeling from the news of his arrival in San Diego on Monday. As reported by Latitude 38 the San Francisco sailing monthly: 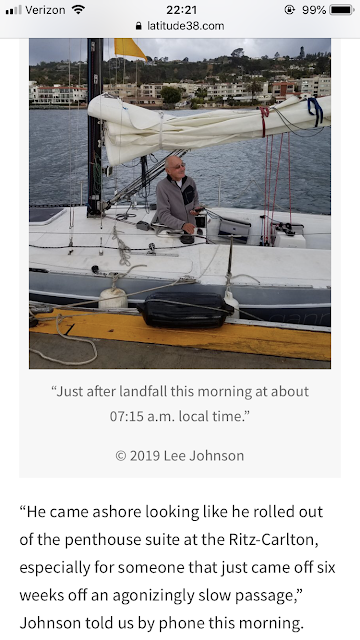 Here's the thing: no one sails from Panama to California because it is as tough a  sail as anywhere. Those who do make their way north from the Canal tend to hug the coast and basically harbor hop using engines as much as sails. Chiles has a useful and very functional electric outboard, a Torqeedo, suitable for entering and leaving harbors but not for extended passages. He sails. His own first brief description of this passage hints at  how arduous the sail was: Self Portrait In The Present Sea, Journal. Each blue dot represents  six hours of sailing on the Yellow Brick satellite  sender. A hard sail indeed: 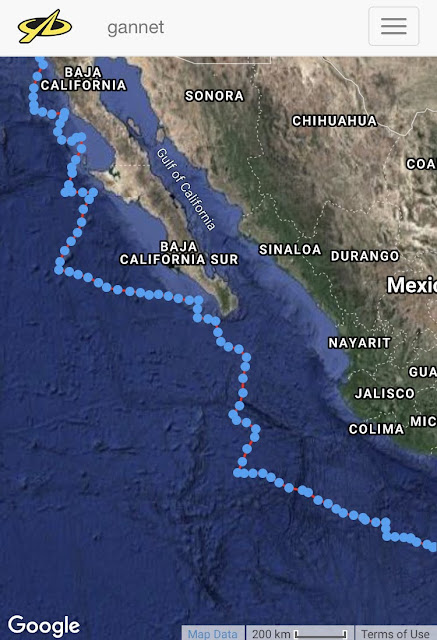 The thing about sailing is that long off shore passages are generally comfortable in one direction and in the right season. On the west coast of North America winds generally  blow from the north west and swells follow suit. Or it's a dead calm. Not good news for a man sailing north on a  small light boat like Gannet. 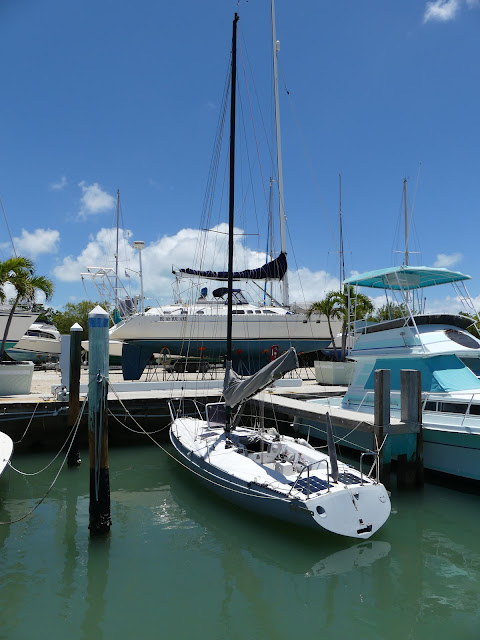 I photographed the Moore 24 in Marathon after Webb had sailed from California to New Zealand to Australia to South Africa to Florida...in a cabin the size of two large broom closets. He is a man of astonishing resilience and he loves being afloat, he lives to sail offshore and on his own with no way of calling for help should he get into a pickle. There aren't many like him, and I'm certainly not cut from that adventurer's cloth. 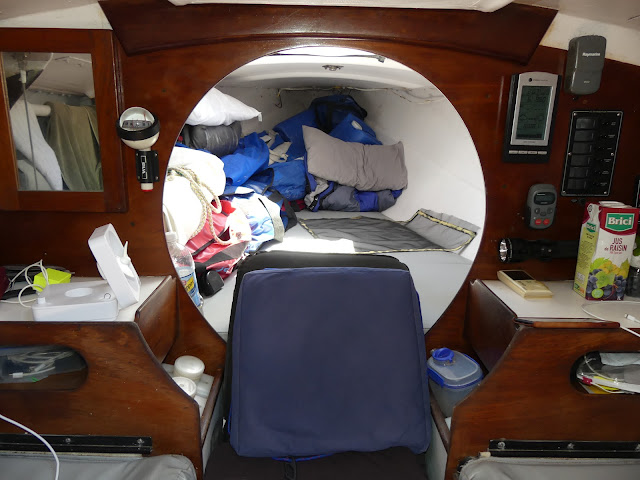 I am glad he made it back to San Diego safely but I had no doubt he would. Of much greater concern to me was his plan to thread the islands and reefs of the Bahamas around the east end of Cuba on his way to the Canal. The irony is that I suggested that route because getting south from the east coast of the US isn't easy - those pesky southeast winds and north flowing currents...Of course he did fine but then had to struggle to get across Panama where he ended up using a truck on the road and thus bypassing the Canal bureaucracy. Been there done that and this time he was on a boat small enough to be able to take the land route. Gannet comes through in its own particular style! And then off he went again on the  water! This is what the Yellow Brick looks like when you click on a  blue dot: 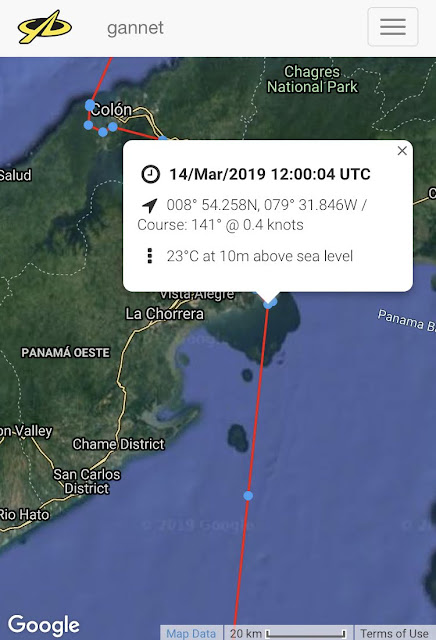 I've been reading Webb Chiles ever since I started sailing in the mid 1980s, spending long winter evenings on my own boat reading his stories in books and magazine articles. He has made his living from writing ever since. And he has plenty to write about. Now he says he is entering the third phase of a well planned and well executed life. Perhaps no more circumnavigating and that seems reasonable enough with so many already completed and smartly too. 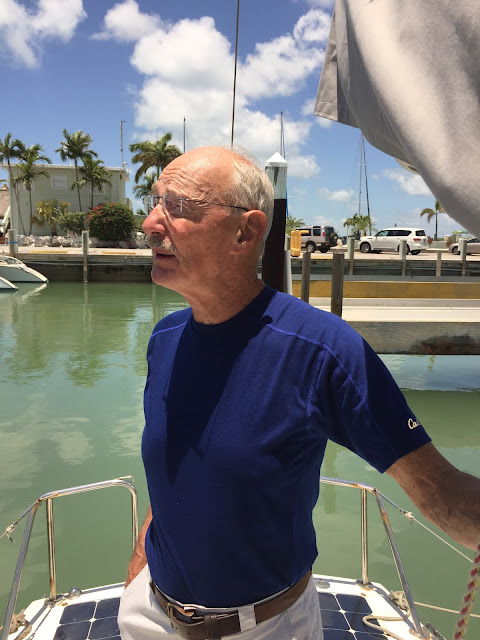 I shall miss reading the passage notes of extraordinary journeys by an out of the ordinary sailor. If you want to know what it's really like to cross oceans in a small boat I can do no better than to recommend his series of videos made at sea explaining exactly how it feels. No truer videos were made in my opinion:  YouTube Link. To read his books check this Amazon author's Page. I envy you if you have yet to read any of his adventures for the very first time.  And finally here is his page on the Cruising World magazine page to which he has contributed since forever. I think his wife will be glad to have him home for a while. I share her joy from the periphery. I have missed his emails while he has been away.
Posted by Conchscooter at 12:00 AM

What another great achievement for your friend Webb. I thank you for introducing us to him years ago; his writings are inspirational and thought-provoking. This Panama-San Diego passage was a nail-biter on the yellow brick, but such a thrill when he reached San Diego! I read his blog right after yours every morning and I look forward to sharing this next stage of his life, along with enjoying re-reading his past writings. An explorer in the truest sense, how lucky we are that he took us along for the ride!

What an amazing feat! Hats off to your friend and an inspirational sailor. Michigan.

Thanks. He’ll be glad to see your support. I missed him terribly while he was offshore.